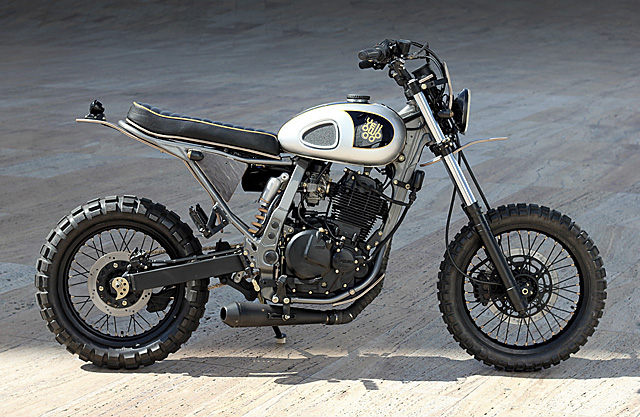 It’ll come as no surprise to regular readers that we sometimes feature bikes that incorporate elements from other subcultures. Be it surfing, camping, or in today’s case skating, some of the most inspiring and original builds we’ve seen happen when two unexpected yet cool pastimes collide. In the past, we’ve seen bikes with boards attached to them, seats built on decks and even chain tensioners made from their wheels. But we think it’s fair to say that today’s Suzuki takes it to a whole new level, or ramp, as the case may be. So please get righteously gnarly for Portugal’s Yellowood and their DR650 ‘Skate Goat’. 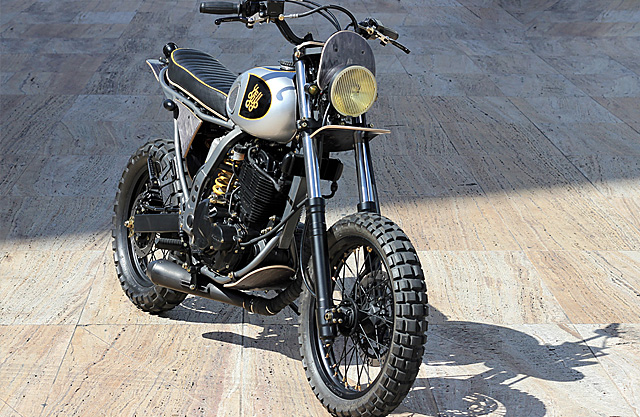 “I’ve been a skateboarder for 27 years,” says Matosinhos local Philippe De Goyri. “Nowadays, I own a company called Yellowood. We specialise in the production of fingerboards and skateboards. Here in our beachside town east of Porto, we enjoy skateboarding & surfing a lot. It’s our life. And because of the sun, we like to call it ‘yellowlife.’” 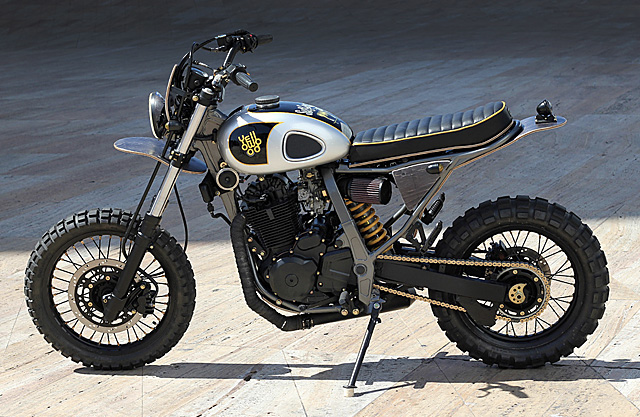 Philippe mentioned that he’s an artist and someone who likes a challenge. Needless to say that this was his first proper bike build. “The bike that inspired me was the DR650 from Deus Bali, mainly because of the classic Suzuki yellow colour scheme.” 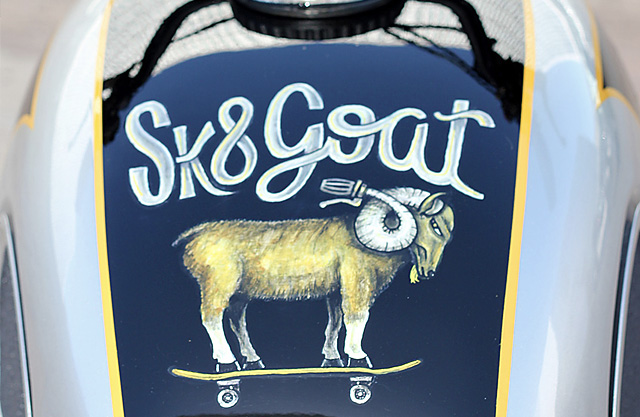 And here we were thinking you needed opposable thumbs to skate

“I got my first bikes around the same time I developed a skateboarding habit and I always connected both riding and skating with those moments when I felt truly free. It was also a lot of fun to ride my bike while sitting on my skateboard.” Then last winter, Philippe found himself with enough free time to develop a crazy idea. “It was simple – I’d make a bike using skateboard decks.” 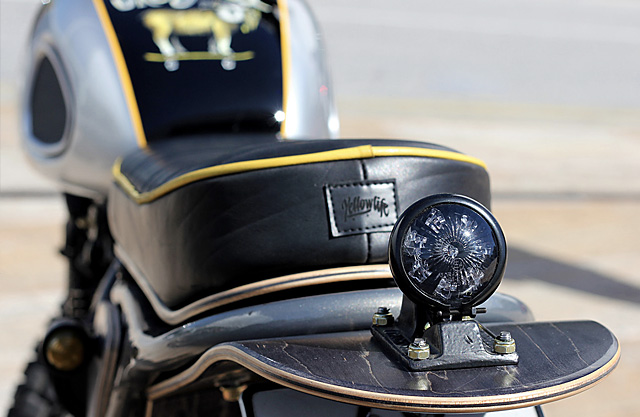 “I bought a DR650 from a farmer in the middle of Portugal and immediately started designing the bike. First, I used some of my fingerboard decks to make a small model _ I had to see if the idea would actually work. It was surprisingly easy to cut decks and model the new parts of the bike I’d be making.” 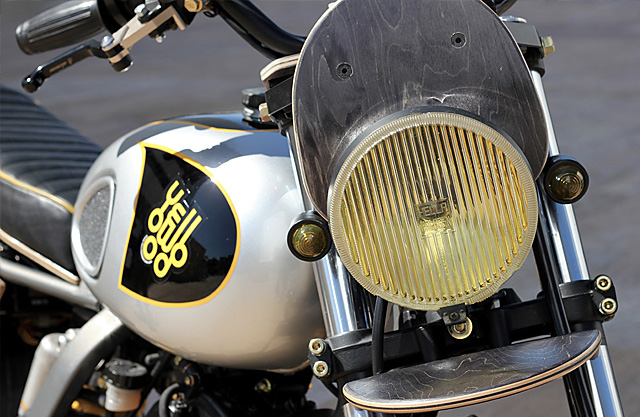 Once satisfied, Philippe handmade the decks to be used for the project with a grey dyed veneer to match the rest of the bike’s colour scheme. Although he notes that he really doesn’t like to destroy decks unless absolutely necessary. “I have a lot of respect for skateboarding, so I used broken boards to make up the templates. In the end, I only used three fresh decks to make all the final components for the bike.” 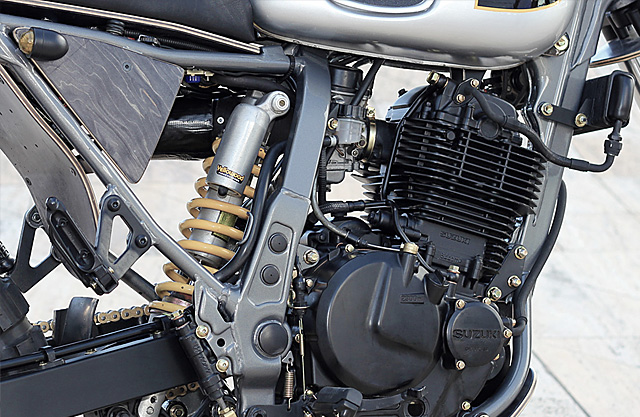 “For my projects, I always like to use yellow. On this bike I really wanted more yellow, but just on the details and as a highlight colour. So I decided to yellow anodise all the bike’s bolts and nuts. It was quite a challenge when the box came back with all the pieces mixed together. But I really liked the effect, and for the rest of the build I tried to prepare all the components before building the finished product.” 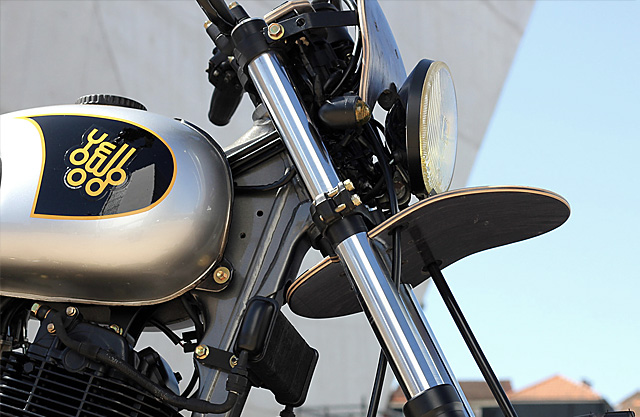 The rest of the build pulls no conservative punches, either. “The gas tank was from an old Maico and it was restored inside out. Then I hand-painted a goat riding a skateboard because that’s really how you feel when you ride it.” Okay – maybe that’s a Portuguese thing… “The frame was then cut in order to match the deck for the seat with the deck for the tail at the correct angles. The tail light was made using an old Independent skate truck.”

Up front, Philippe adapted a radiator from a VW beetle to cool the thing down and topped it off with an old Hella rally headlight. The final touch was to independently shape all the boards to fit the overall look of the bike. 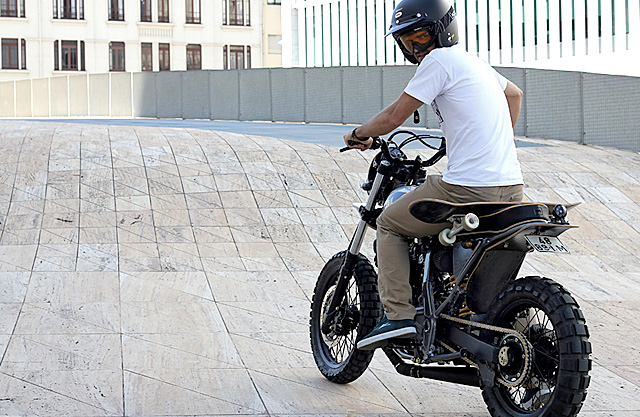 Philippe flees after noticing the ‘No Skateboarding or Livestock’ sign

“In the end, the bike turned out exactly the way I envisioned it. It was a good technical challenge and I had a blast doing it. I’m already planning to make more bikes using skateboards, that’s for sure.”