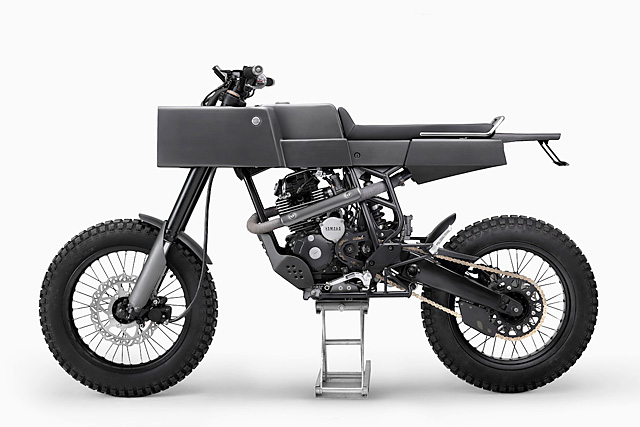 It’s easy to become jaded working here. Like some biking Roman Emperors, we get all the latest and greatest two-wheeled pleasures lavished upon us on a daily basis. The sweetest cafés, the plumpest brats and the most exotic trackers – all hand peeled and fed to us from a silver platter. Let’s face it, it’d be pretty easy for us to become spoilt. What am I saying? We are spoilt. But just as we find ourselves nodding off into a cool bike-induced coma, this appears in our mail. So, like a proud ruler parading a never-seen-before rhinoceros to a boudoir full of amazed onlookers, we’d like to present to you the ‘Cross’. What is it? It’s Thrive Motorcycles, that’s what.

We were lucky enough to manage a chat with the lads from Jakarta’s Thrive, and we asked them how such an original design came to be. “The bike’s owner is not only a great graphic designer, but also a very good friend,” they said. “We’ve known him for quite a few years, so when he asked us to build him a bike, we pulled out all the stops. In fact, it’s probably our most ambitious and creative build to date.” 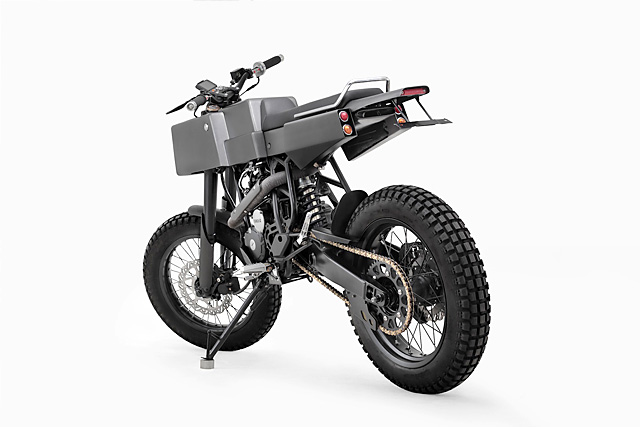 Clearly, the Thrive team and the bike’s owner are the kind of people who play well together. For all the crazy functional questions he asked of the team, the end result is a creative form that clearly works not only as a tool but as art, too. “It’s always interesting for us when we meet other people who also have strong visions and big dreams; their creativity really inspires us to build something that’s not only good-looking, but also something with meaning, too.” 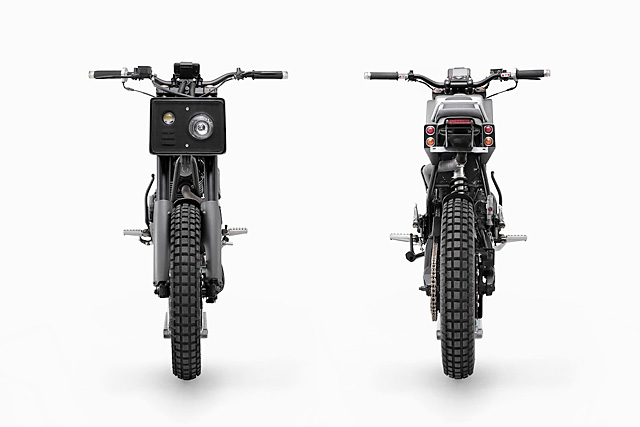 “We began to wonder what kind of spirit would live in between such extremes.”

Then while toying of the idea of good and bad and black and white, they had a revelation of sorts. “We began to wonder what kind of spirit would live in between such extremes. We though there must be more than neutrality; maybe the grey area is more mysterious than you could ever imagine? What if it could be really bad and very good at the same time?” The result was a rough sketch that captured the perfect bike for the brief – one that could face the worst of roads without fear yet still look like a poster child for beautiful design to boot. 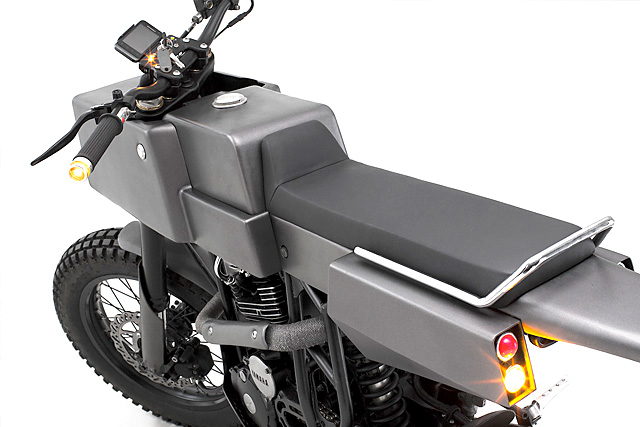 With such an unusual body in mind, they were quick to realise that most of the original frame would be history. “We started by creating a whole new subframe to achieve a clean look under the seat and to maximise the horizontal grid we were designing to.” Next came time to choose the bike’s main material – in this instance a sheet aluminium that would be used to not only achieve the ‘grey’ they were after, but to also save precious weight.

“The engine was in a good condition when she came though our front door, but a few parts got some new replacements. Next came a good vapour blast and some new gaskets, then we added a PE-28 carb so she could breathe a little more fresh air. We also covered the custom-made stainless steel exhaust with a grey exhaust wrap to match the overall look.” 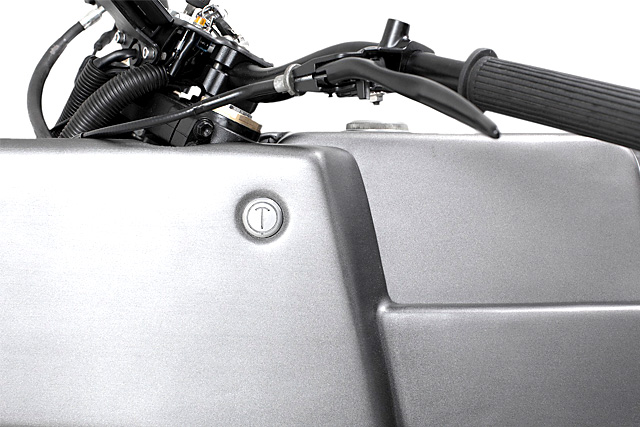 To ensure decent amounts of off-road control, Thrive sourced a new Rental ‘Fatbar’ handlebar and completed the set-up with a custom clutch and brake lever, a custom dashboard with indicators and a GPS/phone mount, and some custom switch gear. They capped off the ‘bars with bespoke bar-end turn signals to try keep to the overall clean look. Job done, then.

“At the front, we used a set of Honda USD forks, but we had to modify the triple trees and steering column to make it fit perfectly on the Yamaha chassis. For the rear, we used a Yamaha swing arm and paired it with a Showa mono-shock on a custom-made unitrack system.” 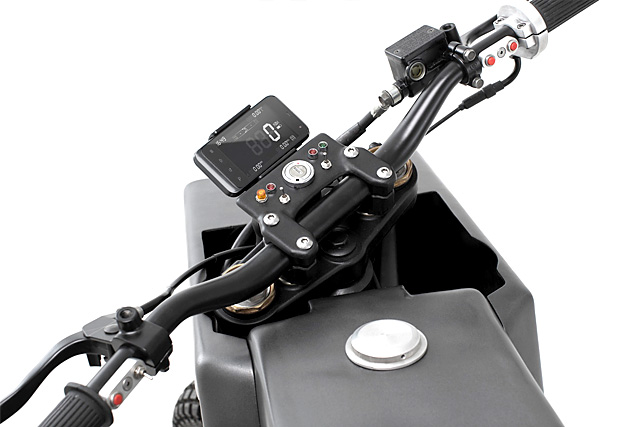 “For shoes, we used a pair of 18” spoke rims wrapped with Kenda ‘Trial Tread’ tyres. For stopping, we added a pair of new disc brakes on a set aftermarket trial hubs. We then modified the original foot pegs by adding some details to enhance the grip and paired them with a new chrome shifter and brake pedal.” 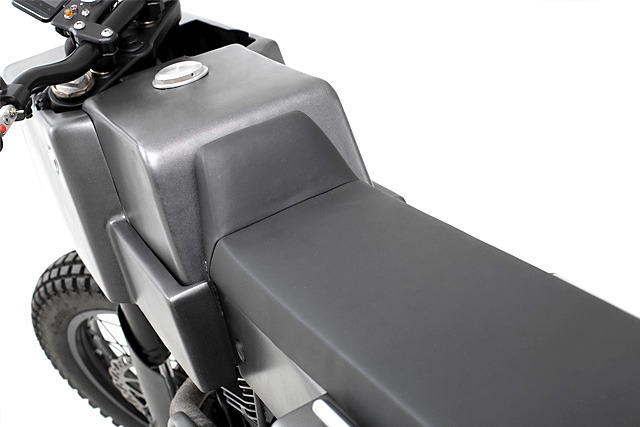 Final additions to the build included a custom skid-plate to protect the engine from any off-road nasties while she goes about her business and the rather Spartan paint scheme. “There’s only two main colors on this bike, a gun-metal grey on top of the brushed aluminium panels and black for the rest of the bike. But with that said, we used three different black powdercoat textures to achieve the final look you see here.” 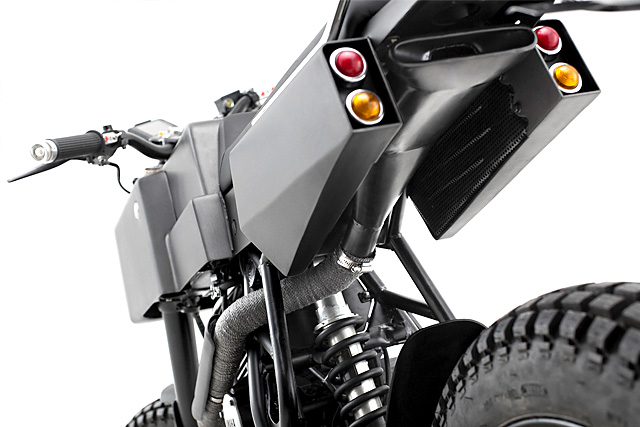 “As we all know, not everything we make is perfection. But dreaming and experimenting with what we believe in is always a good thing. We feel that the strength of idea will make the bike naturally stand out amongst the competition. We hope the Pipeburn fans will like it as much as we liked making it.” 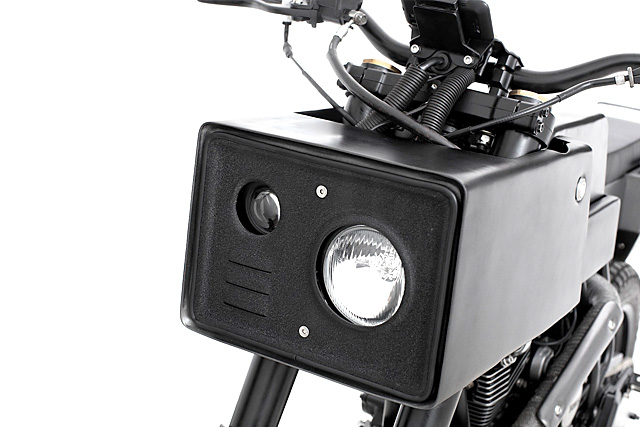 I, for one, welcome our new 70s robotic overlords

As with all great builds, the bike is sure to divide opinions. We’d be disappointed if it didn’t. Some are sure to see the art, while others will just see it as an exercise in aesthetic eccentricity. But one thing’s for sure – like a rhinoceros in a boudoir, it’s impossible to ignore.