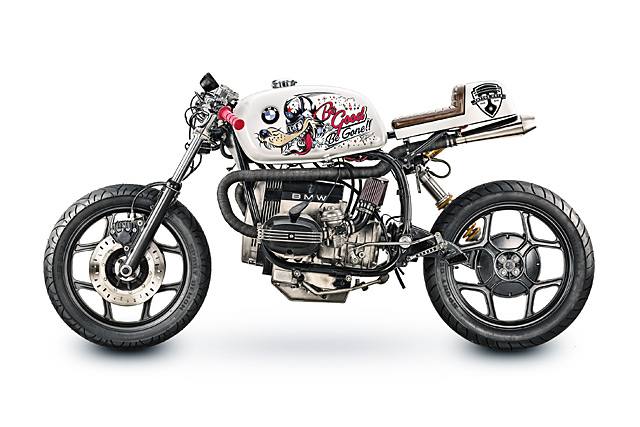 Tattoo Projects is back with a Hot Rod Racer that took a serious tumble while living life in the fast lane that nearly cost it its life. But a motivated team ready to roll up their sleeves, with creativity running through their veins and Jack and Coke fuelling their engines have this 1986 BMW R80 turning heads once again. 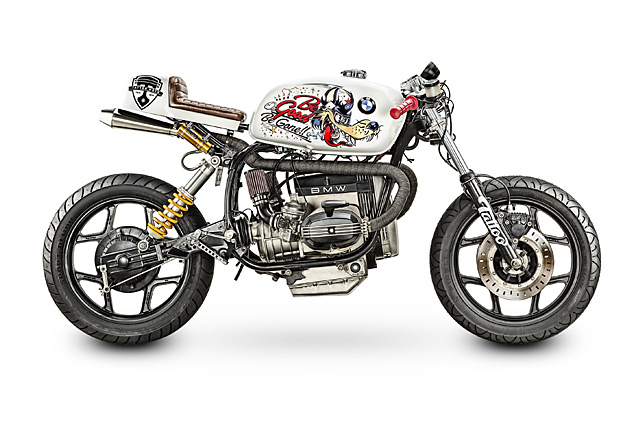 The truth is this BMW has lived three very different lives, the first as a very conservative German dressed in its fairings and 80’s regalia. That was until Tattoo Projects gave the German a hipster makeover into a bratty café racer in flat black that was so good it scored a feature here on Pipeburn.com. So why life number three? Well a nameless employee of Tattoo Projects was twisting the BMWs throttle at cool a 70mph when he laid her over and the Brafe Racer was dead. After the team had grieved, worn black and tipped a little Moonshine on the black top they dreamt up an aggressive , Hot Rod inspired build and set to work to breathe a third life into their BMW. 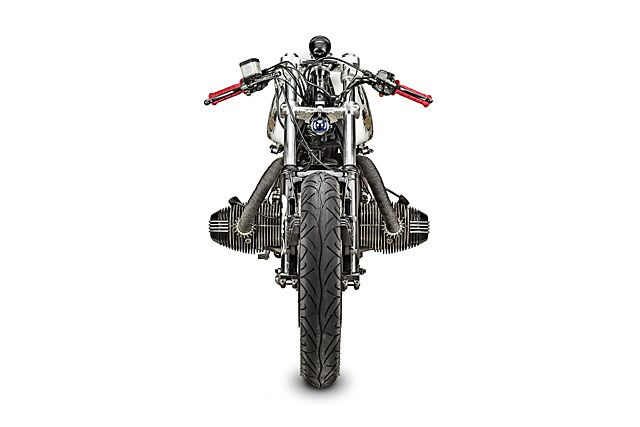 The key to the jacked up Hot Rod styling is the monster 3″ lift on the rear tank mount, it gives the BMW a whole new aggressive nose down stance. To accommodate the tank position a new subframe needed to be fabricated and after the team had made a scale mock-up the matching seat was left in the hands of Ian Halcott of Café Racer Seat and Tank. He fabricated the aluminium pan and his wife, Carolyn, worked her magic on the custom leather seat. The result is a small café style unit that angles the rider down along the same lines as the tank, further accentuating the high in the rear look. 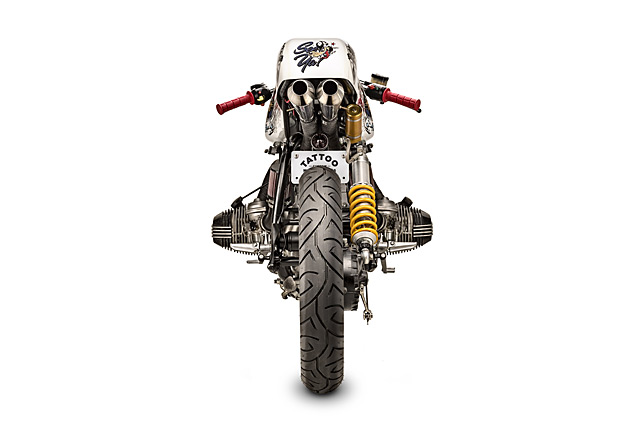 Now it was time to get the tank right and Bob’s crash (It was Bob, Bob ladies and gentleman, Bob crashed it) had left the R80 metal in less than stellar condition. With the right hammers and some body filler the gang had the lines nice and straight, ready to lay down the paint. With the tank having been painted flat black a less creative crew might have decided that colour would do again for their new look. 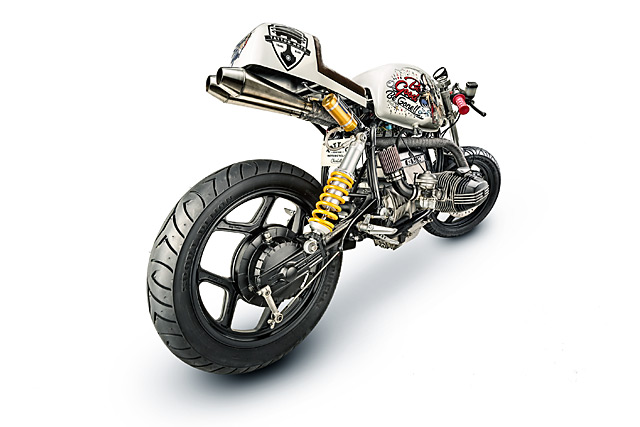 But these are the people who made a cool marketing campaign for a vacuum cleaner so they have no trouble with a challenge and picked BMW’s less than tough Alpine White to coat the tins. Hardly aggressive, but they weren’t done there, the white becomes the perfect canvas for the “Be Good, or Be Gone” themed art work of the highly talented David Vicente from dvicente-art.com. It gives the BMW a whole new level of old school cool, it’s aggressive, in your face and the level of detail would make the best of Hot Rod builders proud. 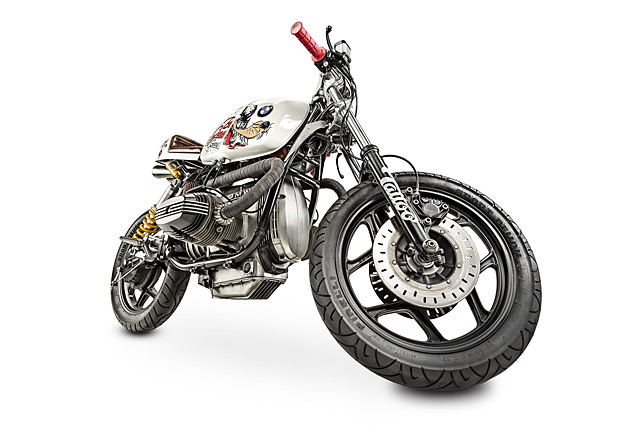 Powering the BMW along is the 797cc Bavarian Boxer whose airheads have become a more and more common sight in the custom scene over recent years. In its café incarnation the stock headers were wrapped and ended with some reverse cone mufflers from Dime City Cycles. With a chance to do something different version 3.0 features a high mount custom exhaust that shoots the pipes over the top of the heads, through the frame and out under the seat. With the seat now elevated there is ample room for the much-loved twin shorties to exit underneath, this time supplied by Cone Engineering. Also adding a few more horses to the stock 50bhp are a pair of upswept pod filters, replacing the standard airbox that was still in place on the café racer.

Despite the “showier” look of the rebuilt version it now handles substantially better thanks to an upgrade in all the key areas. Maybe Bob should blame the old Firestone Deluxe Champions that were fitted which have now been replaced with the grippy Sport Demons from Pirelli. The front suspension has also come in for a rebuild with progressive springs now working inside the standard tubes. Stiffening the front end is a custom triple clamp from Stephen at Toaster Tan that also features the Tattoo Moto logo beautifully machined into the top. While out the back the single shock on the shaft drive rear end is left to the best in the business, the Big O, a fully adjustable Ohlin’s unit. 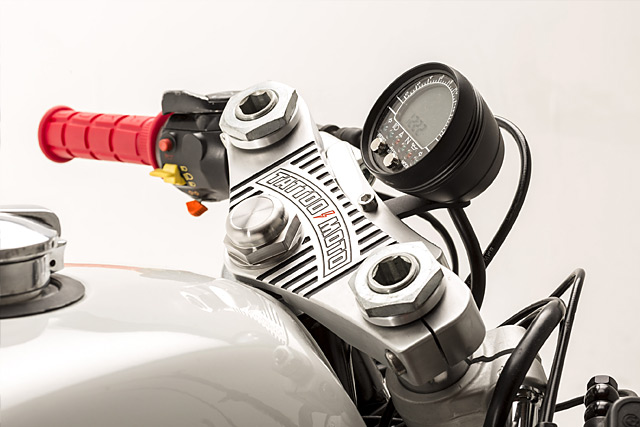 To finish the look the low mounted clip-ons now wear a set of in your face red Oury Grips that match the red in the graphics. While an Acewell speedo will now let Bob know the next time he is approaching that traumatic 70mph, sorry Bob. To make the bike road legal a small LED headlight has been cleverly mounted under the lower triple clamp while a brake light resides under the seat. 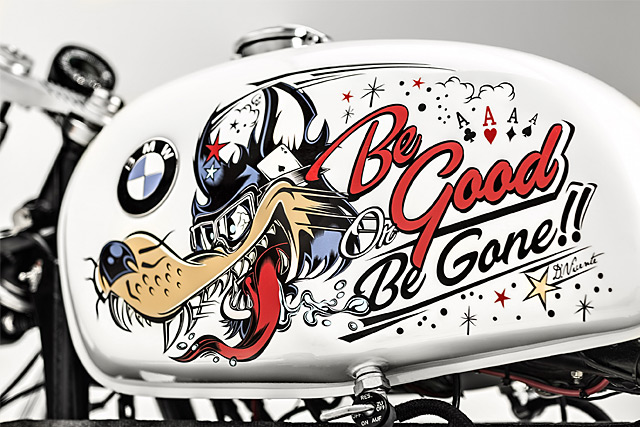 Now this 1986 R80 is ready to roll again, no longer a Sunday morning machine to take you latte hunting. This bad ass BMW is a Saturday night brawler that takes its Whiskey straight up and serves as a constant reminder to Tattoo Projects that giving up or simply settling is not in their nature, “Be Good or Be Gone”. 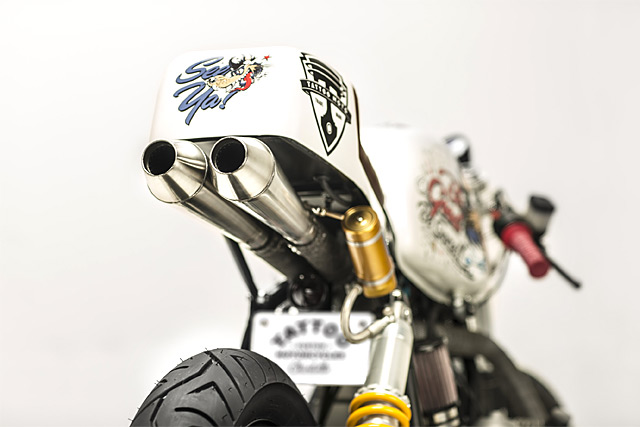