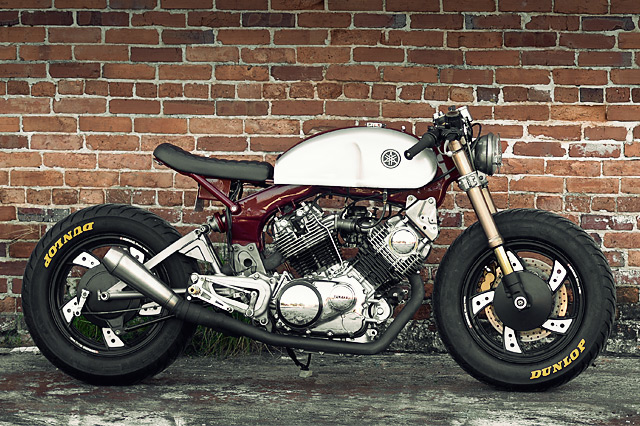 The artist and engineer usually come at their work from completely different ends of the creative continuum and often go together about as well as a bull in a china shop. But on the rare occasion they do mix well, the results are truly spectacular – and this Custom Yamaha Virago known as “GoGo” just happens to be one such example. 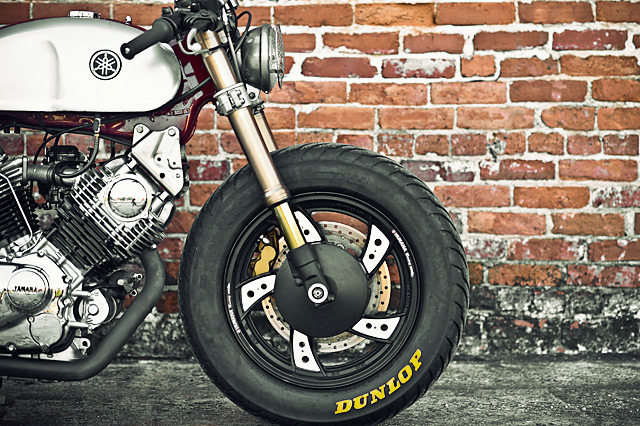 The artist and owner is photographer extraordinaire Erick Runyon and the engineer is the king of custom Yamaha’s, the one and only, Greg Hageman. Erick photographs Greg’s spectacular creations and it was at one of their get-togethers that they discussed seeing how nice a job they could do on a XV750 with a limited budget.

The bike was built and that might have been the end of the story until as Erick explains “I was shooting another build for Greg that fell on me in the studio and broke my knee in two places”. Out of action for six months the budget XV750 would look at the crippled Erick and whisper ideas into his creative brain, ideas that Erick would suggest to Greg over the phone. Given that they live in the same Neighbourhood Greg had the bike brought over to his place and with the budget now “extended” GoGo was about to go from budget build to one of Hageman’s XV masterpieces! 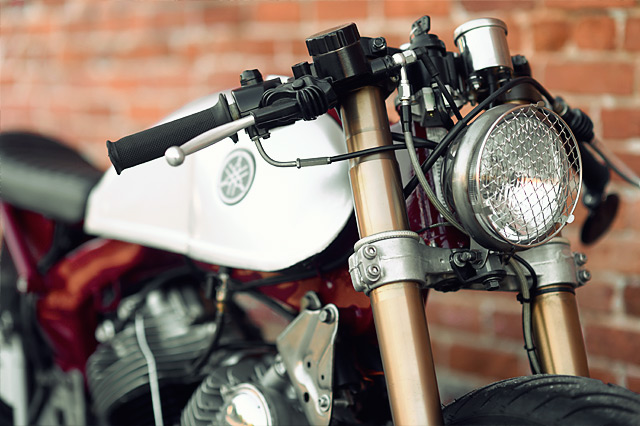 What makes GoGo so special is not just that it was built by Hageman but that there were also contributions from some of the best in the business. The front end is the work of Alain Bernard of Santiago Choppers who put the GSXR 1000 forks on the Yamaha frame. The wheel and tyre combination take chunky to a whole new level, wheels are 16 inches front and rear with incredible custom inserts from Sean Skinner of MotoRelic. While the tyres themselves are one-off Dunlop American Elites normally reserved for Harley’s fleet of touring bikes, measuring a giant 130 in the front and 150 in the rear with raised yellow Dunlop lettering. 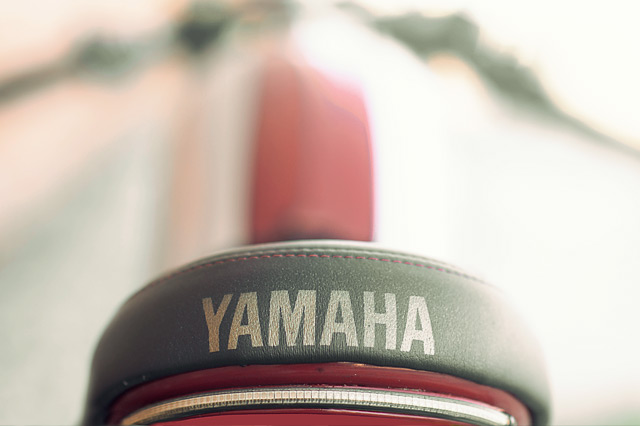 Power for the XV750 now comes from its big brother the XV1100 a conversion Greg did himself and one that makes great sense given the 1063cc donk punches out a considerable improvement in torque over the stock 750 and does it much lower in the rev range. Fuelling the V-twin is now a single carburettor from the kings of V muscle, Harley Davidson, this particular item being from a Sportster model complete with a grilled cone filter. As mentioned earlier there were contributions to this build from some big names and the shorty stainless steel muffler finishing off the growling exhaust comes from Florida’s kings of café racer cool, Dime City Cycles who also provided many of the other bolt on mods. 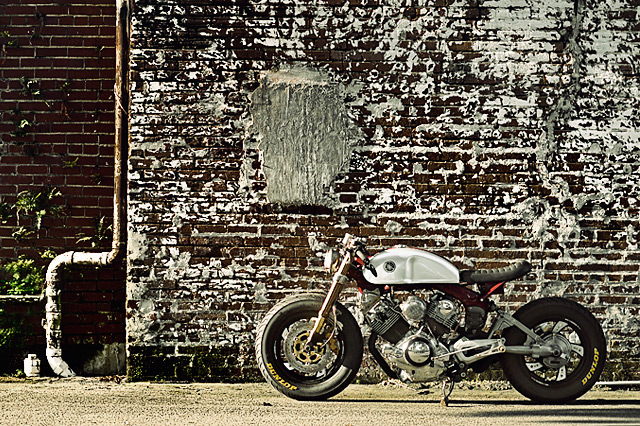 Greg Hageman has pioneered one of the most enduring looks of the café racer Renaissance, the fitting of Benelli’s Mojave tank to the Virago series of bikes and it is simply a match made in heaven. With artistic input from Erick and guns swung by two of his friends Moe from Moe Colors and Craig Skiver of Craig Paints Bikes the mix of raw metal and deep red find their homes in all the right places creating an industrial feel that works perfectly with the aggressive stance of the rest of the build. While many would paint the swingarm black or the same colour as the frame Erick had Joe from ProFab Powder coating finish the metal in a clear powder that not only further enhances the size of the rear tyre it further accentuates the negative space offered up by the new seat arrangement. Which comes the way of a totally redesigned and custom fabricated subframe that supports a beautifully stitched single seat. 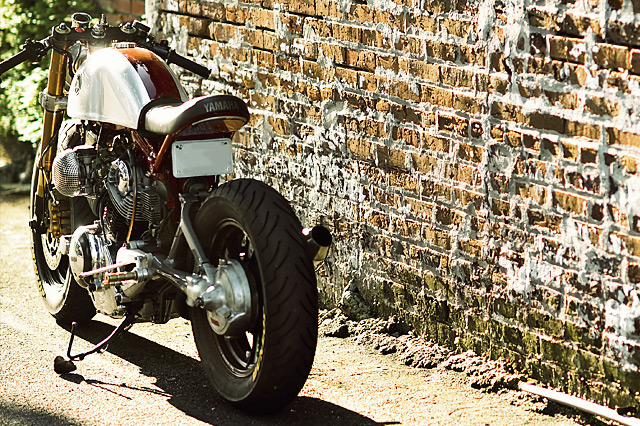 Everywhere you look on GoGo, whether it be form or function, it is clear that Greg and Erick were speaking the same language, even if Erick admits his constant changes of mind may have gone close to driving Greg up the wall. It can often be that a great build falls down in the final details, but not here, the purposeful custom rearsets aren’t just added for cool factor they are exactly what is needed when converting a cruiser to a café racer. The headlight also plays its role with a raw metal finish and aggressive grill expanding on the tough industrial look. 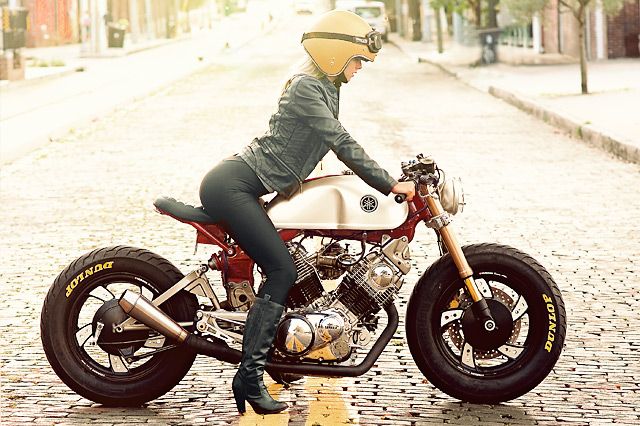 While just below the Yamaha logo on the seat sits a neat LED strip that takes care of taillight and turn signal duties. More of the meshing between artist and engineer comes in the little touches you could easily over look. Hiding parts behind rattle can black paint is an easy way out but Erick and Greg have left items like the forward engine mount and shaft drive in their raw state and it’s these little touches that are as equally as important as the major changes in creating a machine that is truly world-class. 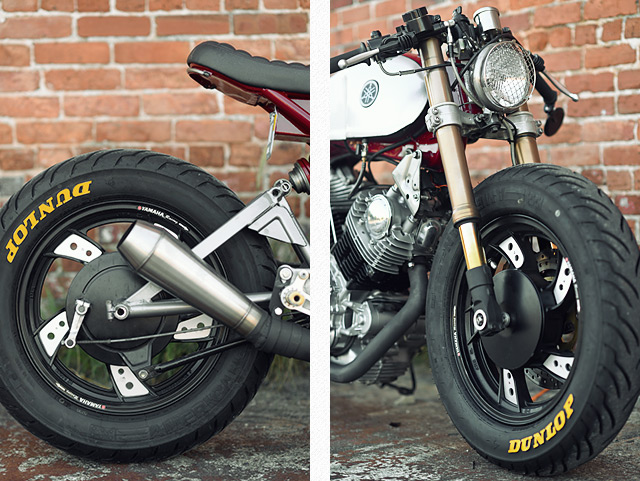 With such an incredible team assembled and Erick’s artistic vision recreated into an automotive masterpiece there is just one part of the story left to tell. The nickname “GoGo” comes from a sexy little assassin GoGo Yubari – a character from the Kill Bill movie. And if a severely disturbed 17-year-old schoolgirl is on her way to disembowel you in a horrific style only Quentin Tarantino could dream up she may as well be aboard her namesake, a Greg Hageman special shot to fame by the Superfoto himself, Erick Runyon! 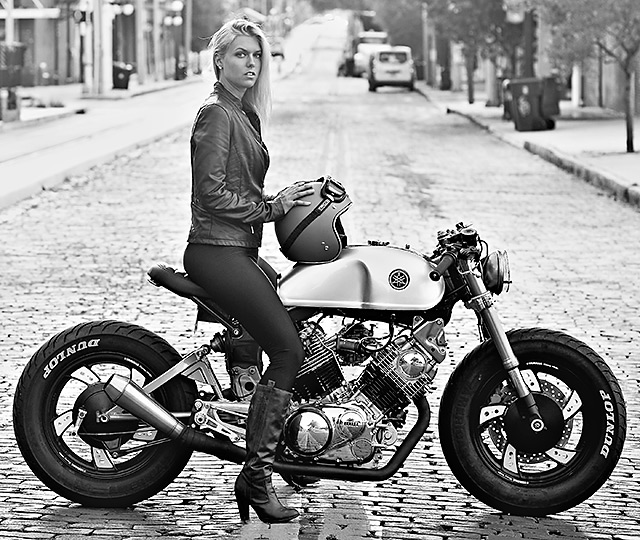