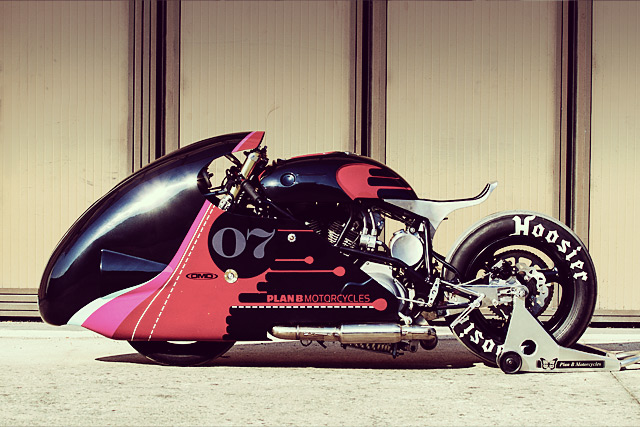 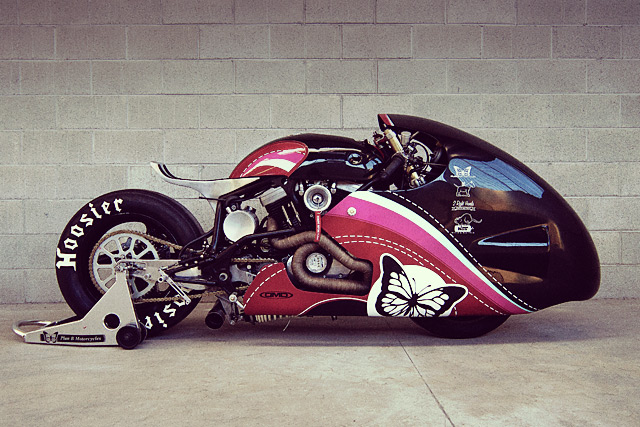 Just about every kind of motorcycle has run between the hay bales at Glemseck’s strip, from vintage racers to modern streetbikes and even Guy Martin’s turbocharged Suzuki that competed at Pikes Peak has had a go. But what interested Christian the most was the twin cylinder air-cooled class of bikes that is becoming the prestige class where the big guns compete for supremacy. His choice of bike however was certainly from left field, no Triumph or old BMW here but a 1999 Buell M2 Cyclone. The frame however is from Christian’s backyard in Italy, built by renowned engineering firm Verlicchi and is a full on, no compromise, tube frame special. The Buell swimgarm has been cleverly adapted to fit and the belt drive ditched in favour of a much more race friendly chain system that allows for easy ratio changes, the current combo being a 60 tooth sprocket and Barnett clutch. 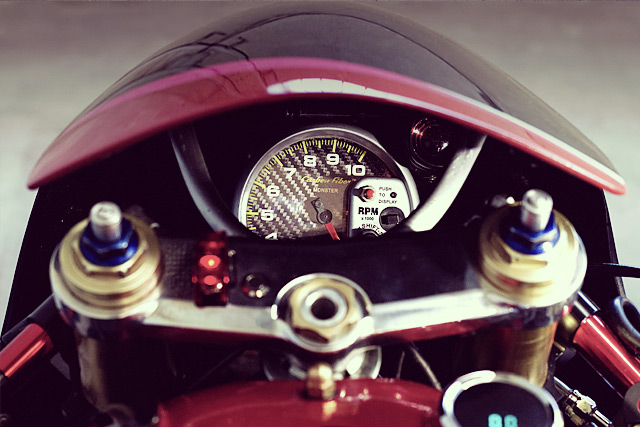 The tank was made in-house by Christian from aluminium with a race friendly 12 litre capacity it incorporates recesses at the front for the helmet of the rider and knee dents to really be able to tuck in. Head down the rider is almost completely shielded by the huge dust bin fairing that features twin cooling scoops for the engine and a single projector headlight to gives its competitors the evil eye. Getting the riding position low and long enough meant removing some material from the frame and the addition of a new monocoque single seat in unpainted aluminium. Its arms out and legs back for a true lay down riding position and the custom rearsets are mounted on brackets that reach halfway along the swingarm. The whole thing is finished off in a spectacular paint job by “Two Right Hands” that has brilliant details everywhere you look. 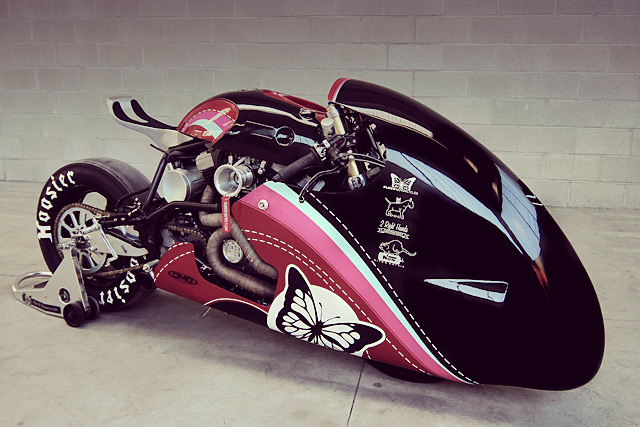 A drag bike isn’t much use, even looking this good, if it’s not pumping out some serious horsepower and this is where the thumping Buell V-Twin comes in. The stock 1203cc engine now has an extra 50cc’s of displacement and is fitted with hi-compression Wiseco forged pistons. The cylinder heads have come in for a great deal of work, machined, flowed and ported their ability to consume the fuel mix is given a helping hand thanks to N8 cams from Andrews. Supplying that mix is a Mikuni HSR42 breathing through a tailor-made velocity stack that drastically outperforms the standard Keihin CV item both in terms of flow and throttle response. Dumping all the spent gases back to atmosphere are tuned length headers with the rest of the system finishing neatly under the frame. A Twin Tec controller allows Christian to adjust the timing throughout the rev range and set the all-important limiter for take-off. 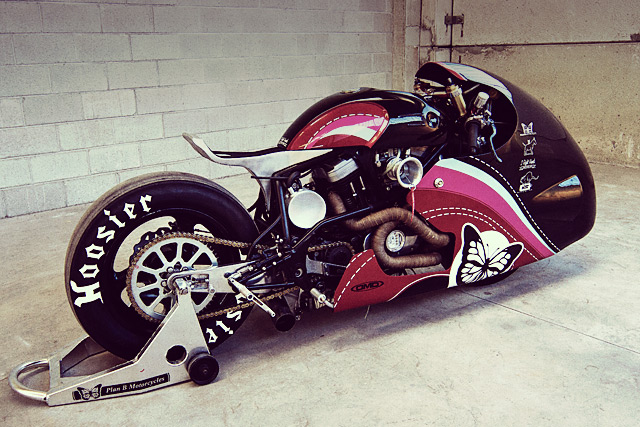 To the uninitiated the suspension on any drag racing machine might seem simplistic, but it couldn’t be further from the truth as the forces from the launch try to twist the whole bike into a pretzel. The front end is drastically improved with the fitment of Suzuki GSXR forks with twin four-piston radial calipers and 320mm floating rotors to bring it all to a halt at the end of the 1/8 mile. While the rear suspension that does much of the work is simply ingenious, the shock absorber is mounted under the swing arm creating enough room to fit the elaborate system that supports it. That system consists of an electric actuator and controller that with the press of the button allows the bike to be lowered or raised, changing trail, rake and the centre of gravity in just a fraction of second. All of which makes sending power through the big Hoosier slick that much easier and can be tuned depending on the grip and surface conditions. 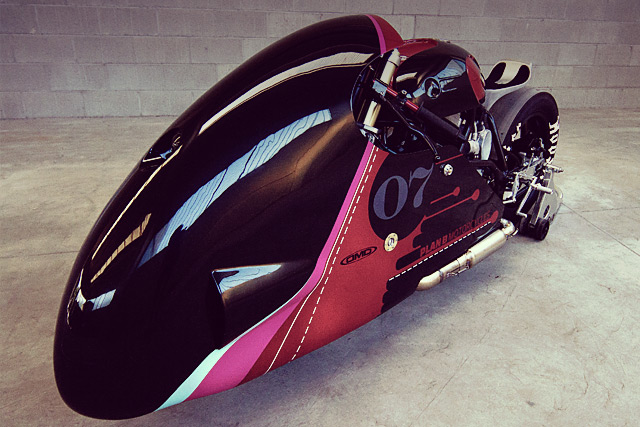 With the bike barely finished it was time to load up and head to Germany with friend and pilot of Cherry Salt, Emanuele Crosta, along for the ride. Having not had a chance to test the machine and a disassembled carburettor still in their hands an hour before racing you could forgive the boys for a less than brilliant first outing. But with the bike improving with every run and Emanuele keeping the throttle pinned no matter the consequences the Plan B creation made it through the eliminations and onto the finals of the International Sprint Class. 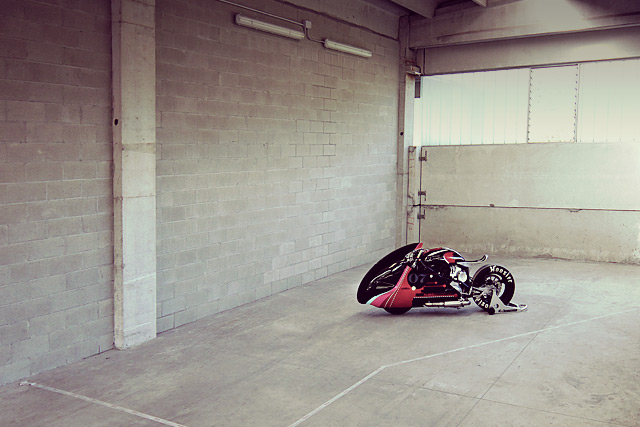 Sadly that is where it would end, with a loss in the quarter-final after they weren’t given the time to properly warm the big slick. But for a first outing for the builder, rider and bike it was one hell of a result and looking around at the level of competition Christian could be extremely proud of their efforts. 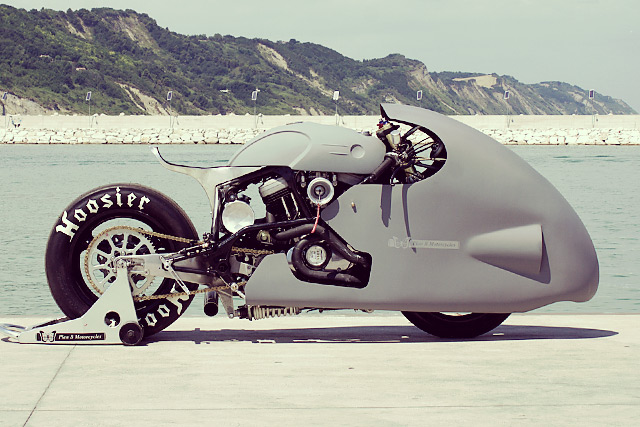 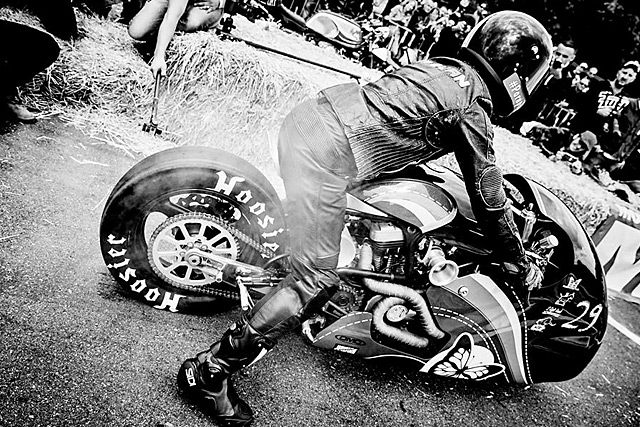 The bike in this year’s Glemseck 1/8th mile race 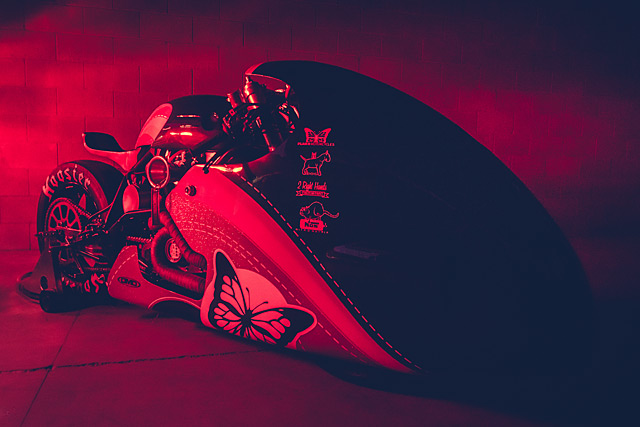 In all its magenta magnificence

So just how did these Italian men of speed come up with the name “Cherry Salt”, well that they are not quite sure. What Christian does know is one late night of brainstorming with the many characters who are friends of Plan B workshop a lot of suggestions were floated around. Perhaps there had been a little vino consumed but from their best recollection Cherry comes from the Buell colour code for the red paint and salt from the ultimate straight line race Bonneville. Either way Cherry Salt will be back to compete yet again and show the world that a one man workshop and a group of friends can conquer the Glemseck 101 no matter how good the competition. 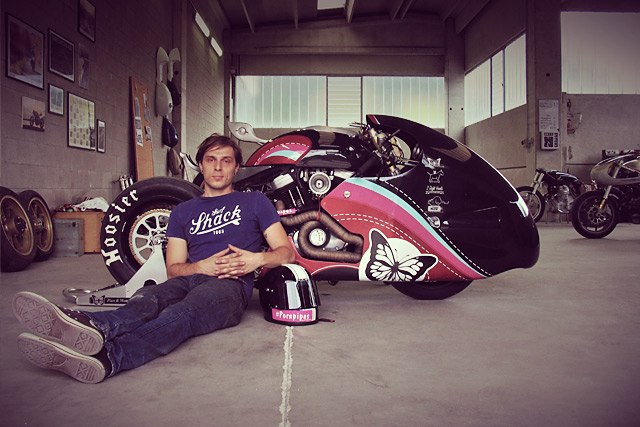 Christian and the Cherry