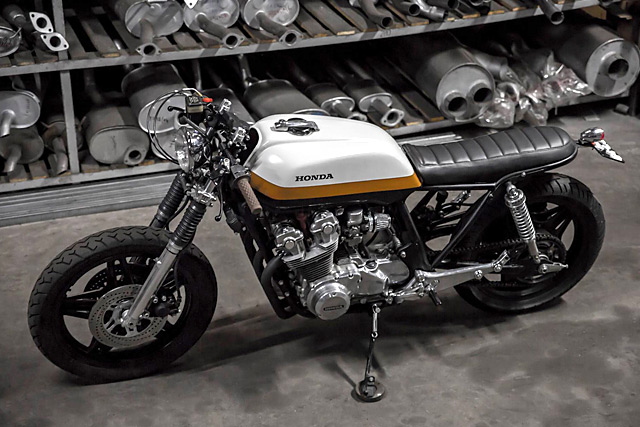 In 1979, as the first Honda CB900 Bol d’Ors were rolling off the production line in Japan, the legendary American director Martin Scorsese was on set making his masterpiece “Raging Bull”. Staring Robert De Niro and Joe Pesci, it’s a black and white tale of Boxing and the Mafia in 1940’s America. It had all the subtly of a sledgehammer. So for Bullitt Garage’s heavy hitting, rebellious big block Honda it made for the perfect name and with Gonçalo strapping on the gloves and Luis in his corner, the CB900 Raging Bull was born. Hailing from the beautiful city of Braga, Portugal, the Bullitt Garage team aim to build an exclusive line of custom machines with underground styling and a level of exclusivity for each and every customer. 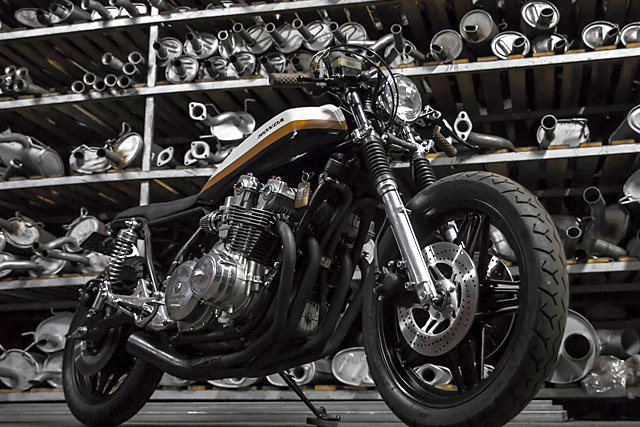 For the CB900, the look Goncalo and Luis came up with was a “return to the racers of the 80s but with a bolder and more rebellious look” and with any CB900 build that huge 20 litre tank dominates the landscape. The horizontal lines that are created with the paint scheme are both a throw-back to the blocky graphics of the Freddie Spencer era while the colour palette hints at that rebellious desire. Black on the bottom reduces the visual size of the tank and hides some of the squared off lines while the white with deep caramel gives the Bol d’Or a distinctive ‘80s industrial feel. 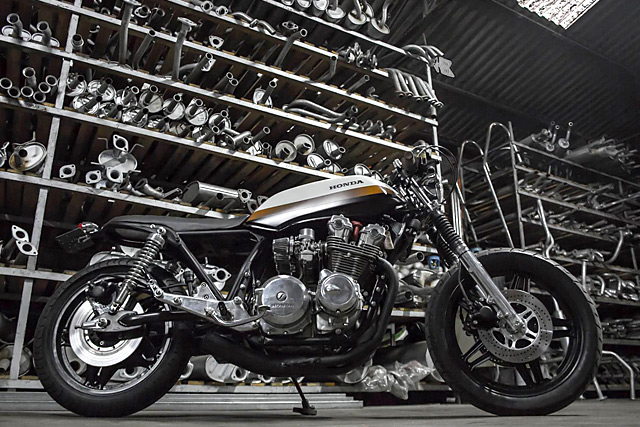 With weight saving a big priority the rear subframe has been removed, along with the rear fairing and sofa like seat with its hefty steel pan. In its place is a new tubular hooped frame with a Bullitt Garage two up seat made from a lightweight aluminium pan with a black leather finish. The side covers, battery box and airbox have all been ditched for more weight saving and the negative space allows the engine to take centre stage.

As one of the last air-cooled superbikes the engine may be considered by some to be old tech, a big bore CB750, but nothing could be further from the truth. Under the watchful eye of Shoichiro Irimajiri who had overseen the development of Honda’s CBX program and earlier their F1 engine program the CB900 featured centrally positioned spark plugs for equidistant burn across the chamber, two-stage cam chain and all new cylinder heads, it was high on horsepower and torque. 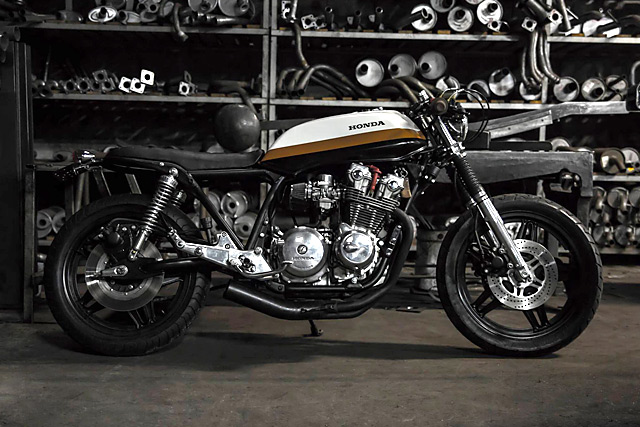 Raging Bull maintains all the good factory fruit but those heads now draw their mixture from rebuilt and tuned 32mm Keihin carbs with improved air flow by way of individual pod filters. On the exhaust side the heavy twin mufflers have been ditched for a set of 4 into 1 pipes that are bad ass in black and release the true sound of the big Honda. The factory machine was good for 11 second quarter miles, so with a lot less weight and some more power this Raging Bull is running Lamborghini numbers. 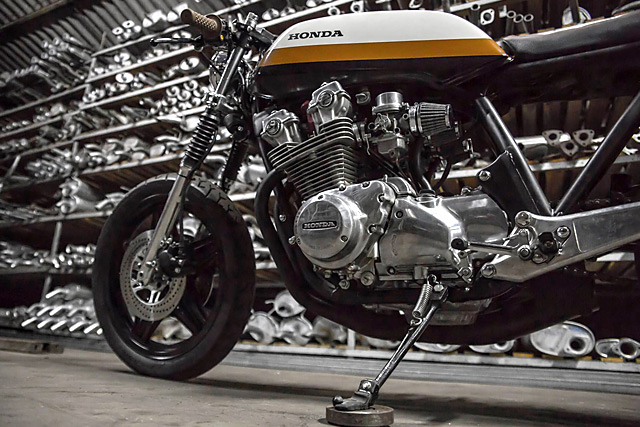 The chassis and suspension were not overlooked by the Honda team who weren’t willing to simply throw their new big block motor into an old frame. It’s this racing pedigree that Gonçalo was keen to retain “The main idea with this “Raging Bull” was to take the most possible weight while maintaining the most original elements possible”. With that in mind the factory telescopic air assisted forks with anti-dive remain in place as one of the truly iconic parts fitted to the CB Honda. 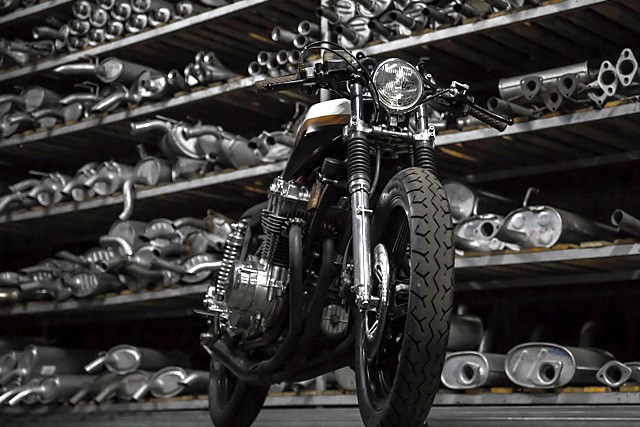 Lowered through the triple trees they bring the centre of gravity closer to terra firma and give Raging Bull a mean stance. While out back the revolutionary rear shocks for the time, with adjustment for dampening, compression and rebound control the factory tubular swingarm. Braking the Bull are cross drilled twin rotors up front clamped by rebuilt Honda calipers with the mammoth 297mm single disc rear kicking the tail out with even a small stab of the pedal. 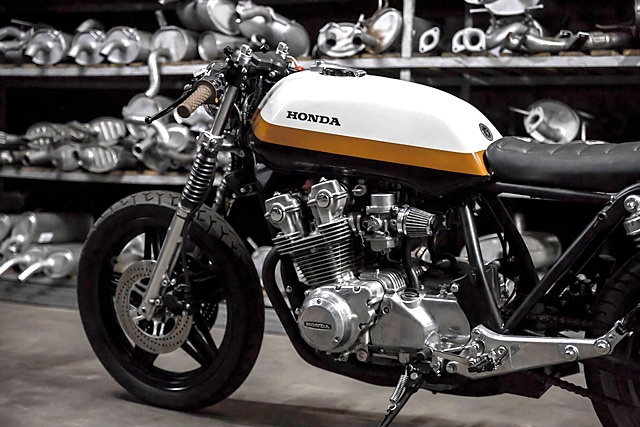 With the major components finished Goncalo turned his attention to the detail items that separate the good builds from the great. The huge instrument cluster of the standard CB is gone, there is just no way to make it look good and a Raging Bull can’t be restricted by “Speed Limits”. The raised bars have been swapped for clip-ons that are set at near on zero degrees to still give plenty of leverage. 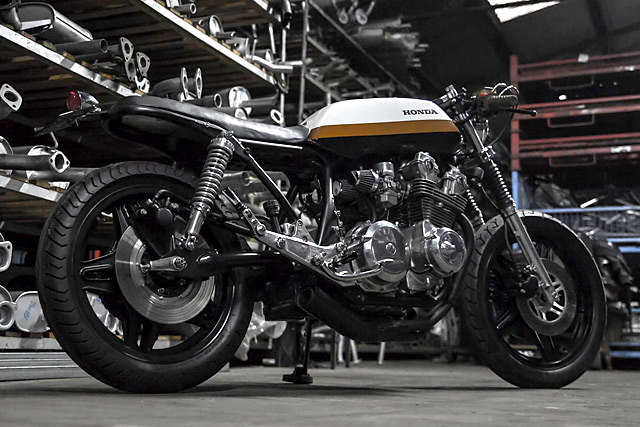 They wear a quick throttle, cleaned up standard switchblocks, standard master cylinder and colour matching brown grips. Lighting the way to the rodeo is a simplified single headlight and fork gators take care of any mud that gets tossed up by this wild beast. 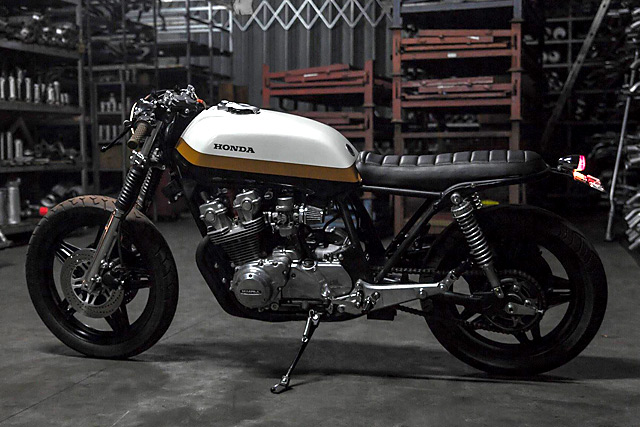 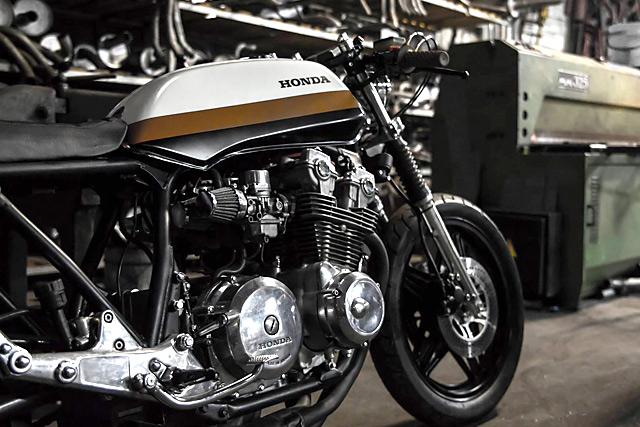 The rear taillight shines over the licence plate that lets you know this is an angry bull that gets ridden and with it’s blacked out wheels and quality rubber it’s ready to stampede its way down the tightest of back alleys or open up those pipes and let the big beast roar, it’ll sit on 120km/h without ever raising a sweat. Once again Gonçalo Sousa Cardoso has crafted a machine that more than meets its brief, the perfect beast for the Jake LaMotta in us all. 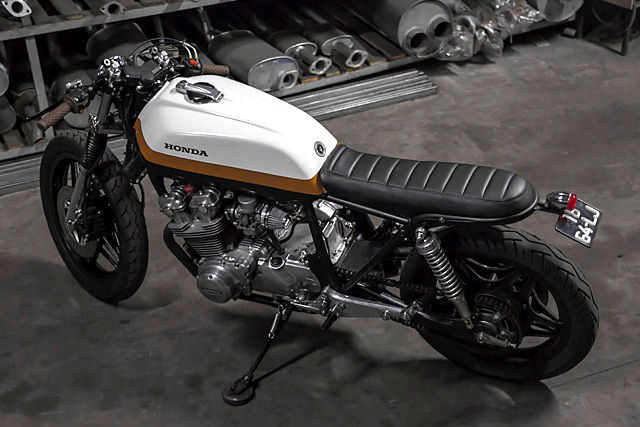