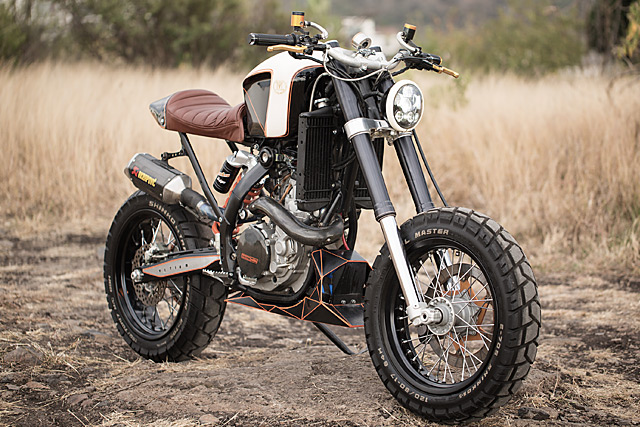 The small state of Querétaro in Northern Mexico has always been a place of revolution and creation having been the locality of both the early Independence movement and the site of the creation of the modern Mexican constitution and it is with this spirit that comes Vitium Moto from the state’s capital of the same name. They are not so much a workshop as a rebellious bunch of builders who as friends unite around their one common vitium (Latin for vice) and build motorcycles that deliberately buck all the trends and refuse to abide by style or convention. They don’t have customers, they create a bond as new friends with those who come to share the same sinful desire for motorcycle revolt and there latest build, a 2009 KTM 450 SMR is proof positive they refuse to fit any mould. 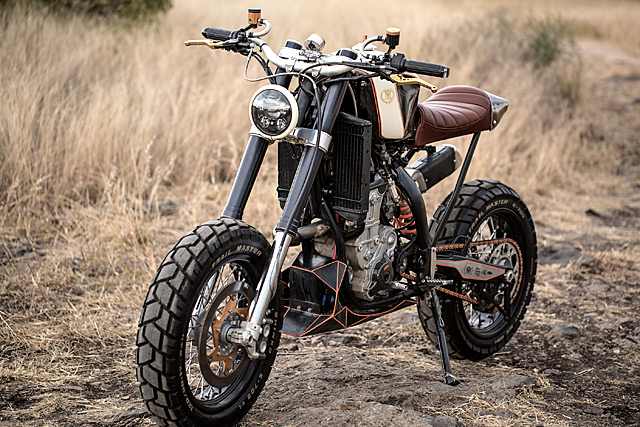 Having picked the bike up from a friend who had little use for the race bred Austrian the boys gave it a thorough thrashing on all surfaces and in all conditions until they felt satisfied they’d discovered the true soul of the motorcycle. This would influence both their design and execution in creating a bike that would conform to only one rule, it had to be street legal, other than that anything else goes. The final design idea was to create a machine with both retro and futuristic appeal that maintained their “Holy Trinity” a horizontal line that runs through the headlight, tank and to the back of the seat. With the rough idea mapped out in their minds they tore into the KTM removing all the competition plastics, gas tank, big factory pipe, the front guard and the twin radiators. With the frame exposed they crafted a secondary subframe to create their horizontal line and under which the starter solenoid and fuses are hidden. 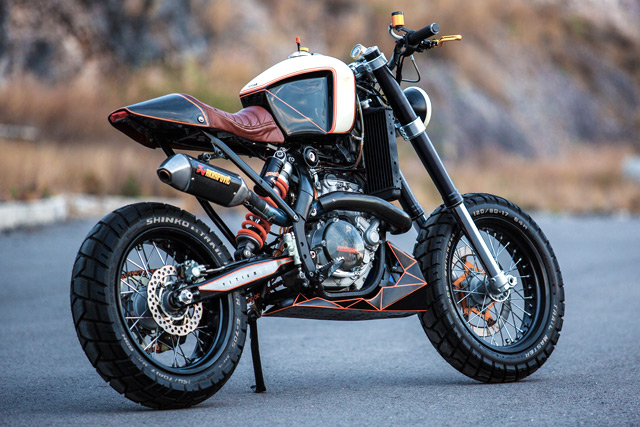 With the frame ready to have its clothes put back on, there was no chance the factory tank would be making a return, but nor was there any consideration of any stock tank. With mallet and panel beaters sandbag collected from the tool box it was time to bash some sheet metal into shape, test fit and continue. It was a lengthy process of welding and shaping over and over again until the tank was just how they envisioned it. The final shape is certainly unique and if you can’t pick the styling then it’s job done “Custom is for the nonconformist, we must stay uncomfortable” The new belly pan took a similar path in its creation with the emphasis on horizontal lines that took a sheet of aluminium and shaped it until it resembled a piece of folded origami. Happy with the new metal work the paint is very much KTM with the orange, white and black but with a stronger emphasis on the darkest of the hues. 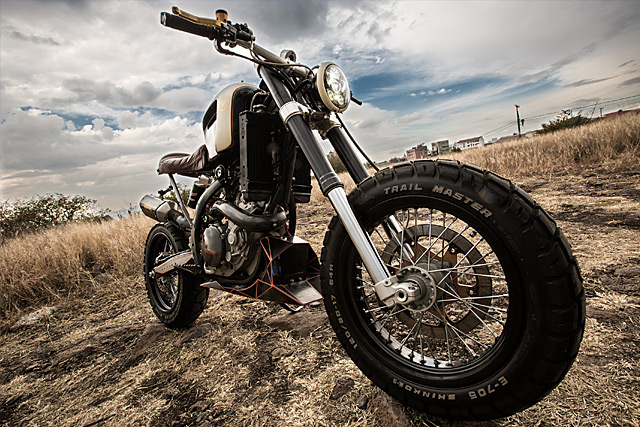 With the modern metal giving a futuristic feel it was time to bring some retro styling to the rebel rebellion and the seat is where the bulk of that takes place. A two piece aluminium base was crafted to work with the new dual subframe before being built up with cushioning high-density foam. Once the desired shape had been formed it was finally covered in rustic high-grade leather stitched like a saddle for a little cowboy feel. The seat gets a modern touch with the custom carbon fibre cowl wearing orange pinstriping. To keep the look as clean as possible no new tabs were added but the original bolt holes for the plastics that once adorned this competition derived SuperMoto were re-purposed to support the seat and its new cowl. 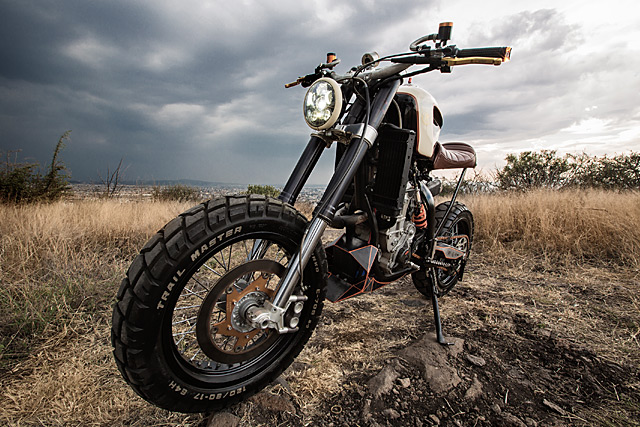 The engine remains relatively stock, but KTM built this bike to be competition ready straight from the floor so the guys had no qualms in keeping the horsepower relatively standard and even adding some extra weight. That stock power comes from the screaming 450cc single cylinder short stroke motor that breathes through a Keihin MX FCR 41 carburettor. To reduce weight the absurdly large stock muffler was ditched for an Akropovic pipe in lightweight carbon fibre that only requires the smallest of brackets to keep it in place. The factory air box has been shown the door for a small K&N filter and the unorthodox decision to front mount the battery in its own box that also doubles as an air deflector which then rams fresh oxygen into the engine creating an all mighty induction roar now feeds that new foam. It’s certainly a unique way of mounting a battery but the Vitium team were determined to maintain clean space below the seat. 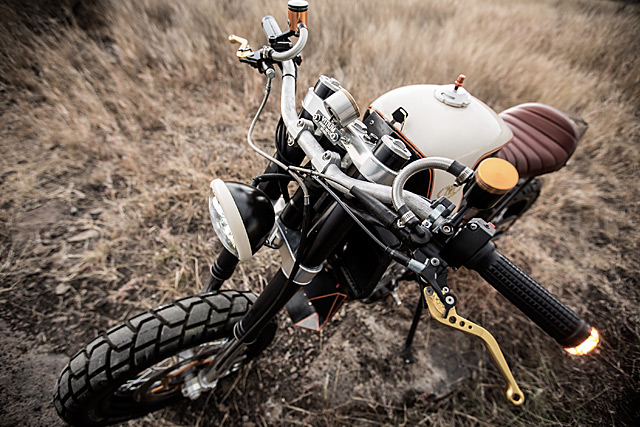 Maintaining the rage against convention the bars are held by reversed risers sitting below the upper triple clamps but as the standard risers wouldn’t work effectively in this configuration the guys fabricated their own from stainless steel. The bars themselves are the ever popular Renthal’s that have been fitted with a host of functional parts and nothing more, adjustable levers and new reservoirs with braided lines that have the caps switched up for a colour change. There is a left hand rear brake to show you just how hard this bike gets ridden, new grips and LED Motogadget indicators in the bar ends. With the electrical system of such a machine not designed to support a conventional lighting system, LEDs are used for the taillight hidden under the cowl and the headlight unit originally intended for a Harley features a modern array of the little brights. 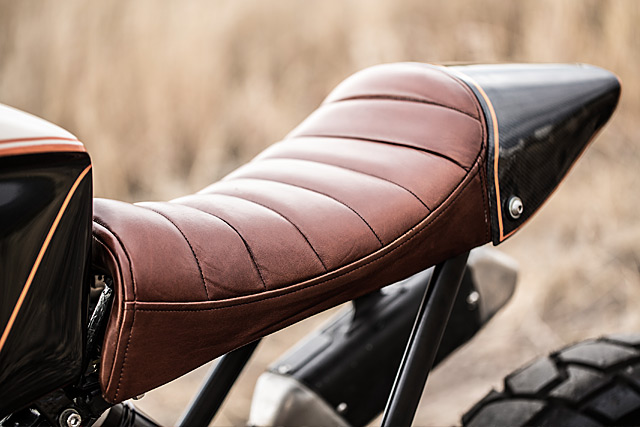 Handling duties are left in the more than capable hands of the stock components that were brilliant straight from the factory and made the SMR are a world beater upon release. The front forks are WP USD items with a massive 280mm of travel while the single rear shock is WP’s PDS unit that has a rock hoping 310mm of travel. 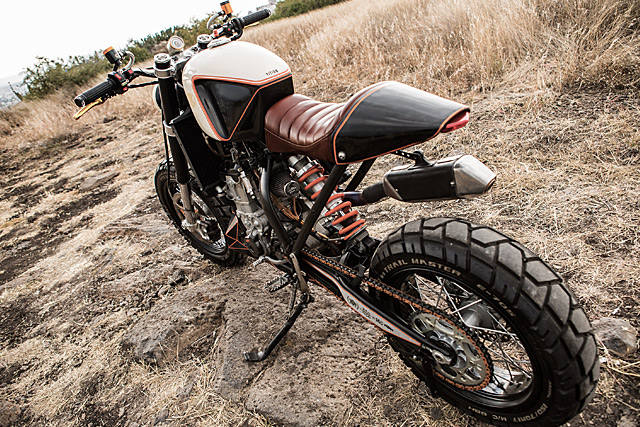 Pulling things to a halt are the lightweight Beringer front disc brake and the rear drilled Brembo disc and caliper. Rubber comes in the form of the ultra aggressive Shinko Trail Master E705 in the biggest size the boys could get to fit the standard rims. The final touch is the Vintage speedo from one of the most modern companies in the game, Motogadget. “Its function was no longer to be the fastest, but simply to ‘be’”. 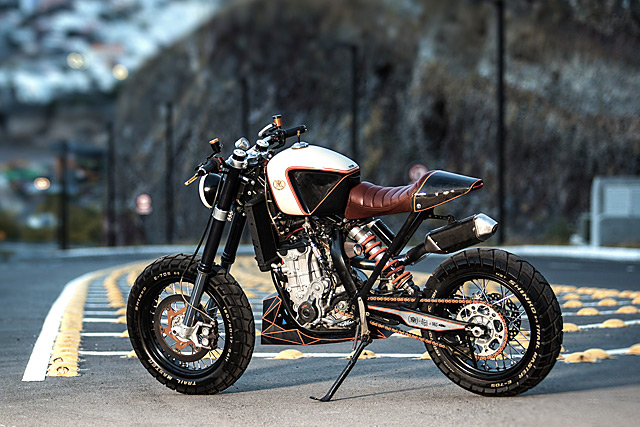 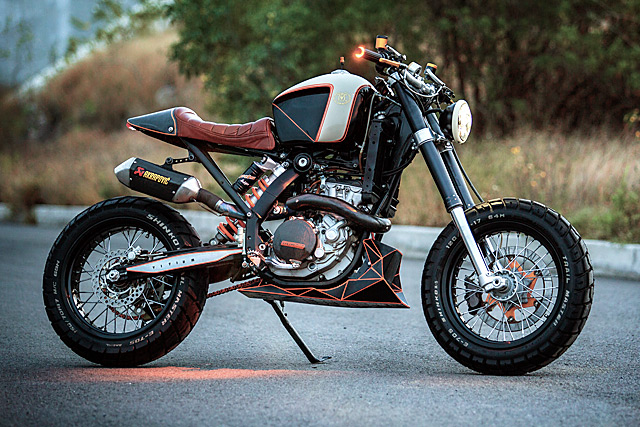 Vitium wanted to create a piece of total individuality that is comfortable in its own skin and has absolutely no concern about judgement from any other bike in the parking lot or their owner. It’s fair to say the talented builders have achieved that goal and in a world of convention where it is easy for many to become lemmings strolling off the cliff of normality they’ve decided that their bikes will not conform to societies rules. It’s a fitting tribute to their home town that spawned an independence movement to liberate a nation that their wild KTM custom now roams the Querétaro streets with the uninhibited stride of a true revolutionary. 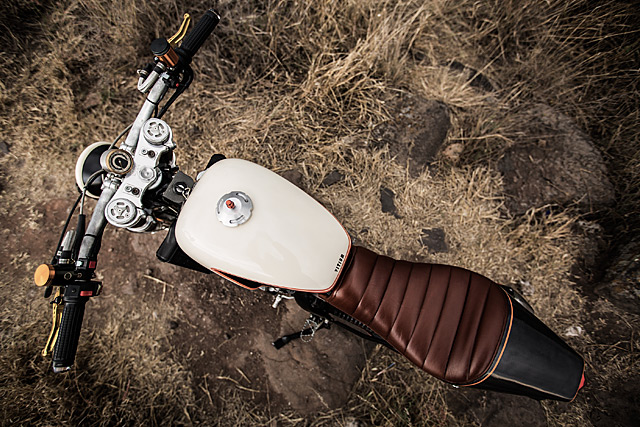