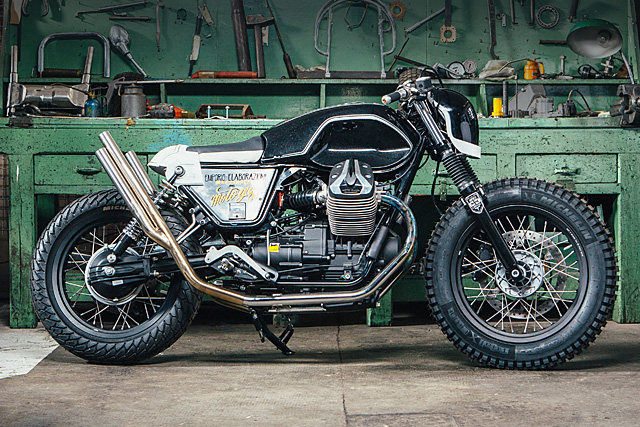 Installment three of Italy’s TV series “Lord of the Bikes” is here. Once again, the producers at Sky Uno have chosen more old friends of Pipeburn; this time it’s the turn of the bad boys from Rome’s Emporio Elaborazioni Meccaniche, the creators of many a stunning ride. But a bike build-off, where impressing the judges to advance to the next round is all that counts, is a much different exercise than designing a bike for a customer. Understated looks, single colours and law-abiding functionality all go out the window with every trick in the book used to fit the theme that has to wow the judges and earn the win. Just as in previous episodes, Emporio was given a 2016 Moto Guzzi V7 as their canvas, but the budget was upped to €4000 and the chance given to Rome’s finest to pick their opponent. 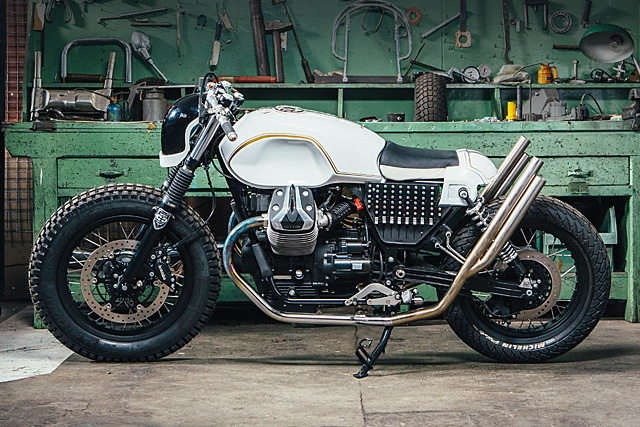 “We won a special contest, so we gained the right to decide who we would challenge. We chose ‘Custom Attack’ who are bike builders from Como,” explains Andrea of EEM. Then it was time for the judges to reveal the theme with which both workshops had to create a representation of in motorcycle form. The envelope was opened to revealed the brief – “Do a bike for a ROCKSTAR”. Having previously built a bike with a Daft Punk theme for a customer and wanting to appeal to the European crowd viewing the show, it gave the EEM team a chance to take their Daft Punk-inspired ideas and this time go crazy like a drug fuelled, over sexed (or over horsepowered?), amped up rockstar gone wild. With just 15 days to get the job done, a camera crew in their faces and a limited budget, the boys decided to work 24/7 to get it done, stripping the bike down to its bare bones and making a neat pile of Guzzi parts they just didn’t need. 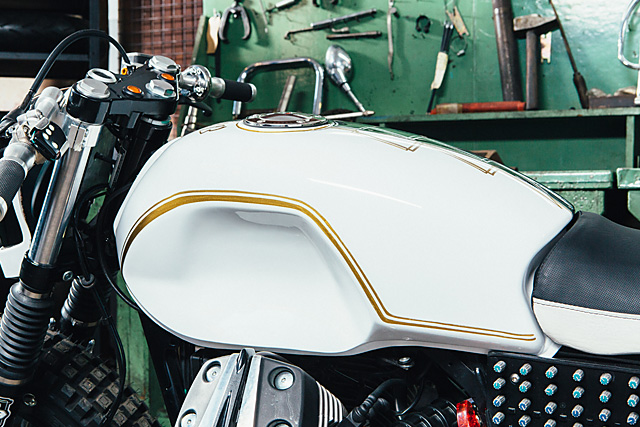 When it comes to Daft Punk if there is one thing you just have to include, it’s the robot like helmets the duo wears at all times and EEM quickly placed an order for one; warp speed on the delivery good sir! But there was no shortage of tasks to take on while they waited and with the distinctive V7 tank obviously going to be used by most teams in the competition they decided they’d give it a serious make over. The convex sides with their sharp centre lines were cut off, smoothed around the edges and then inverted as they were offered up to the tank to be welded back in place. The now concave look gives a far more slender profile, a more rounded appeal and most importantly line up perfectly with the barrels of the engine to show off the famous Guzzi V-Twin. The paint is a highly stylised version of the Daft Punk logo, flaked black on one side with gloss white on the other separated by gold and white lighting pinstripe work. 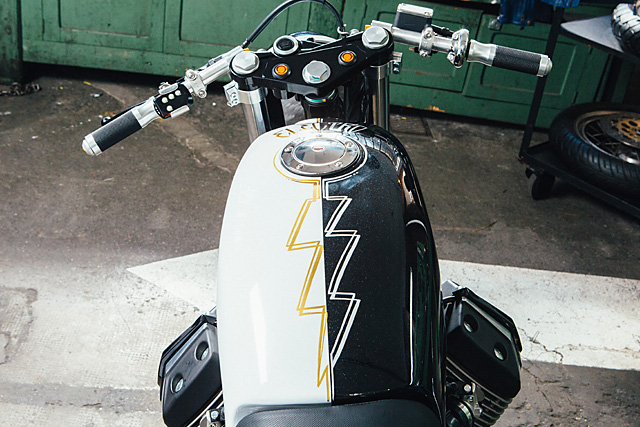 The helmet arrived and was quickly cut in half, with the back section being used to create a rear seat cowl that goes over the top of the colour matched seat in black and white. Under the seat the boys had prepared a little secret but for now there was more work to be done. The front of the mask makes for the perfect headlight, giving the bike a true Daft Punk face and a multicoloured LED is wired in behind the lens that can be controlled remotely to put on a spectacular display as the bike is revealed on stage. It was at this point the EEM guys realised they’d forgotten to address the side covers in their initial design, 15 days is a frighteningly short amount of time to build a custom bike so it’s no wonder the initial sketches had been done so fast. Quick thinking and they came up with some clever ideas, on the right side an old school, Chuck Berry era, voltmeter that is fully functional is fitted up to an alloy cover with the EEM logo painted on. 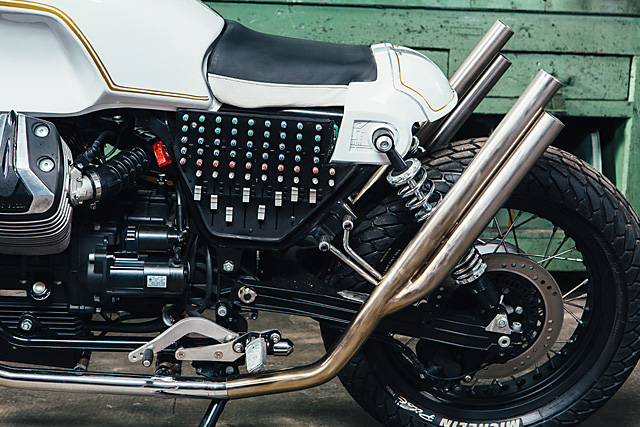 While over on the left a section from the sort of mixing desk you’d see at a Daft Punk concert was sectioned to fit the gap neatly and secured into place. But this is no mere visual addition that was slapped on, the boys still had plenty of tricks up their sleeve and started to wire together some more effects that would make the electro music duo proud. The only keys a musician should have are on a piano, they’ll just lose the normal kind us mere mortals have to fumble with, so instead a weight sensor resides under the seat that initiates the start procedure. Hit the start button and give the throttle a twist and the Guzzi roars to life, no need to rummage through the pockets of your fancy suit. When it’s time to turn the bike off, simply pull up in front of your adoring fans, flick the sidestand down and disembark, 10 seconds later the bike simply switches itself off. 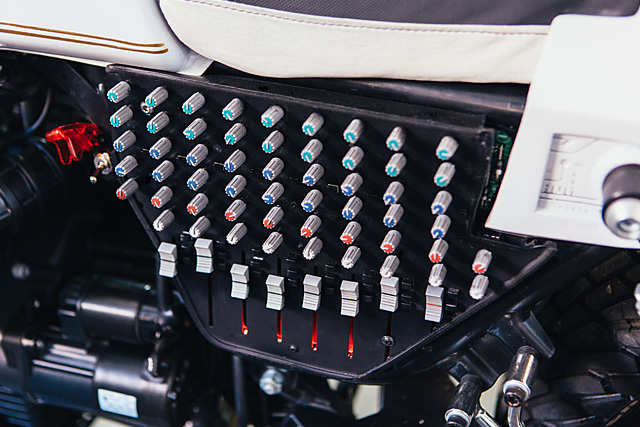 With much of the switch gear relocated to the side’s mixing desk it allows for the front end to be clutter free and it’s further cleaned up by a set of custom billet clip-ons. An old school throttle mechanism, new billet grips and a simple billet topped master cylinder allows all the attention to be focussed on the Daft Punk headlight and its light display and this was a crucial design element EEM wanted to achieve all along. But in case you don’t see the bike coming the engine has received some in-house hop up parts that will ensure you’ll hear the Guzzi coming like being stationed in front of a bank of Marshall amps at an AC/DC concert. The exhaust was built at the shop from stainless and attaches to the headers before dual pipes launch skyward like those fitted to an old church organ. Just like the tank, the TIG welds and metal work are flawless and give the judges more reason to increase their score cards, even if they need ear plugs to get close enough to look. 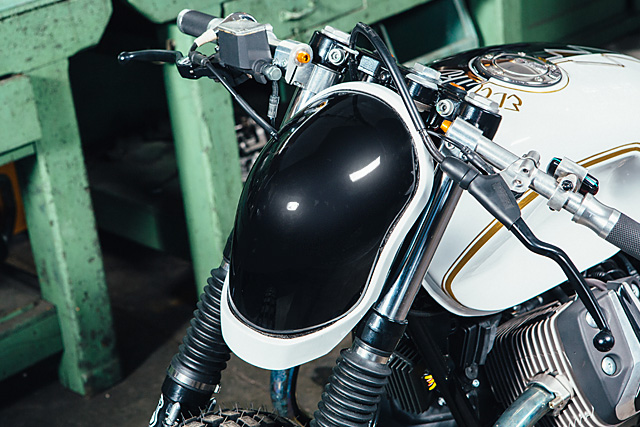 To add some more rockstar bling the rear shocks were swapped out for chrome items, while old school gators give the front forks a meaner look. But the real menace comes from the front tyre, a heavily treaded Michelin Trail X Light, that when spinning in front of the custom headlight looks like an Alien has opened its mouth to reveal a cutting disc for a tongue. While out back the lowered rear end sports a MotoGP inspired wet weather tyre from Michelin to add a little streetability to this Guzzi custom that screams “Harder, Better, Faster, Stronger”. With one of the judges a legendary pinstriper more detail was added to the paint work across the bike with the tank getting the final touch in gold, the name of the bike, “Electro” that symbolises the music genre of Daft Punk. 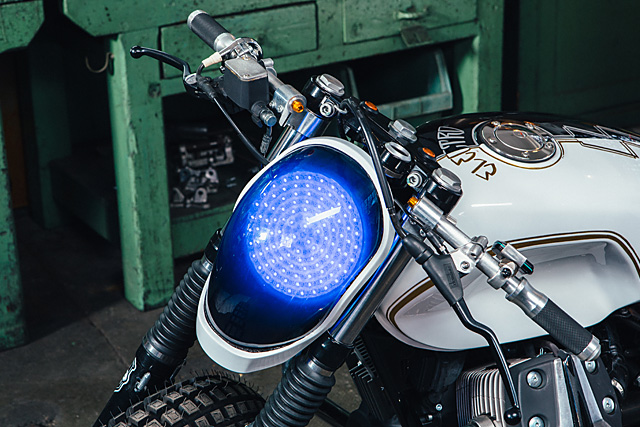 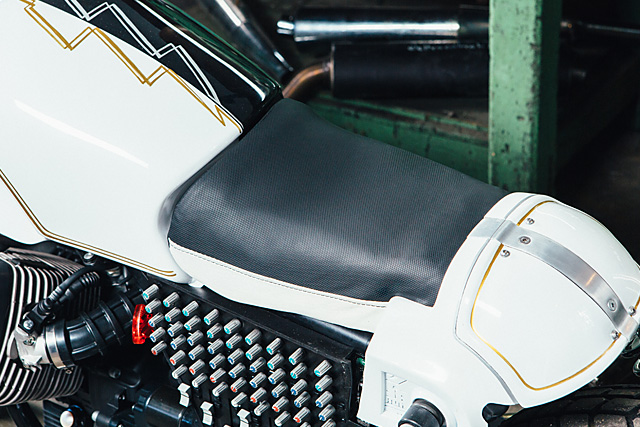 With Emporio Elaborazioni Meccaniche’s machine wheeled out in front of the judges, more red and blue lights flashing than the OJ Simpson chase, it was time to see how it would stack up against their opposition. Their Como counterparts Custom Attack created a Rock ‘n’ Roll themed Bobber known as “Hells Bells” but it wasn’t to be enough, as new school concurred old and EEM are off to the final where they will compete to win it all. From the five heats, the winning teams left standing will battle it out, given a new Moto Guzzi V9 and a little extra cash and Andrea and the boys have only a little longer to get ready to build off again and hope they can get across the line “one more time”.