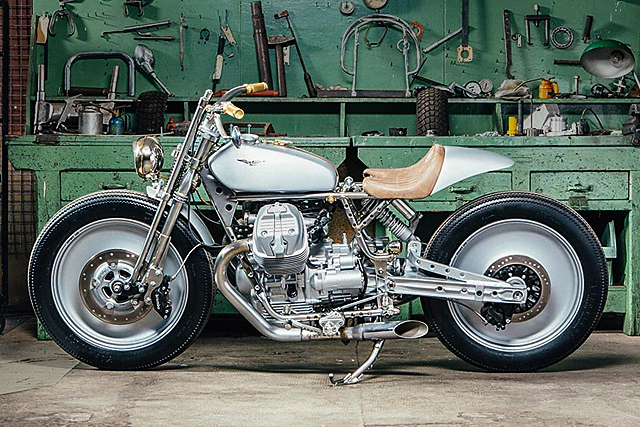 For a custom motorcycle workshop, to be selected to compete in a bike build off on National Television with backing from a major manufacturer sounds like a dream come true. A free motorcycle, cash to spend and instant fame for your business; unless of course you make a hash of it all and that dream turns into a horrible nightmare with an unfinished wreck of a machine. Thankfully, the ten teams selected to compete on Italian TV’s ‘Lord of the Bikes’ show all knocked it out of the park, but there could only be one winner and the king has just been crowned, step forward “Silver Knight”. Built by OMT Garage from Origgio, just North of Milan, it is a stunning take on the all new Moto Guzzi V9, a bike for the Aristocrat in us all but customised on a working man’s budget. 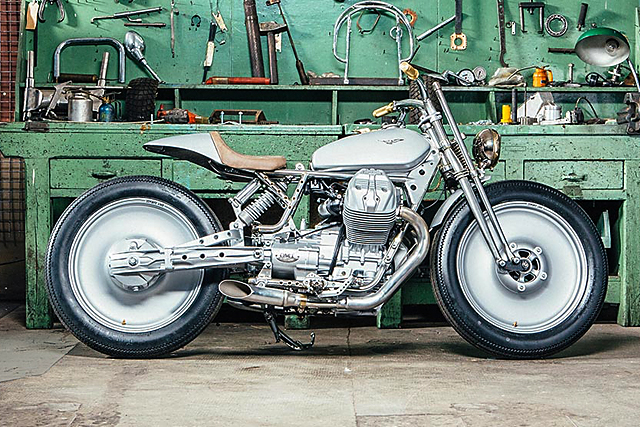 To win their heat OMT Garage took a stock 2015 Moto Guzzi V7, as given to all contestants, and produced a brilliant Cafe Racer with hints of old and new, custom body work and an ingenious one-sided double shock rear suspension setup. But brother’s Mario and Marco knew come finals time they had to step up and deliver something even more incredible, now facing four other teams, the same €3000 budget and even less time for the build. The producers working with Moto Guzzi decided to throw another curve ball at the builders, rather than working with the familiar V7 model, they’d be handed the keys to the all new and unknown V9. Marco admits working with the new bike presented a challenge to all the builders, they hadn’t ridden one let alone had a chance to pull one apart, so with the bike in their shop that’s the first thing they did. Even with a clock ticking rapidly OMT pulled the brand new bike down to the last nut and set about determining what could and couldn’t be done. 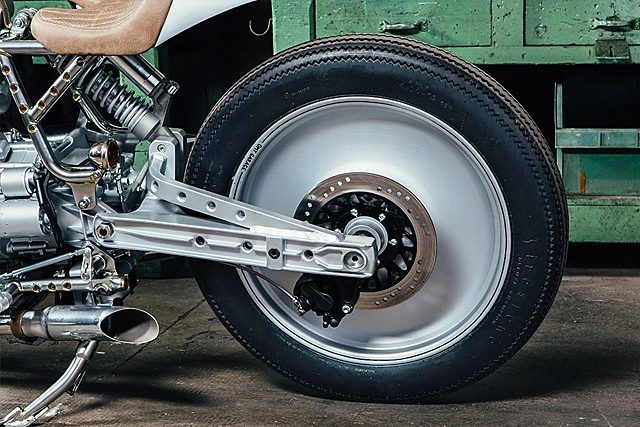 Knowing from the heats that the bulk of builders had opted to make custom tanks rather than utilise the stock Guzzi unit there was no way the brothers would risk leaving the V9 unit in place. So immediately they commenced work on a fully fabricated tank that would be much smaller in dimension than stock to adequately show off the other modifications they had planned. Being a fuel injected bike the V9 stores not only the fuel pump but also the regulator and filter components inside the tank. Some clever engineering and brilliant welds created a pocket for these to reside in without fouling against the tunnel. At the same time a tail section was crafted to rid the Guzzi of the two-up seat and instead a modern take on an old cafe racer design mimics the lines of the new tank. Topping it off is a hand stitched solo seat with a simple OMT Garage logo embroidered as one of the few clues as to just who built this bike, tacky corporatism just doesn’t fly in Northern Italy. 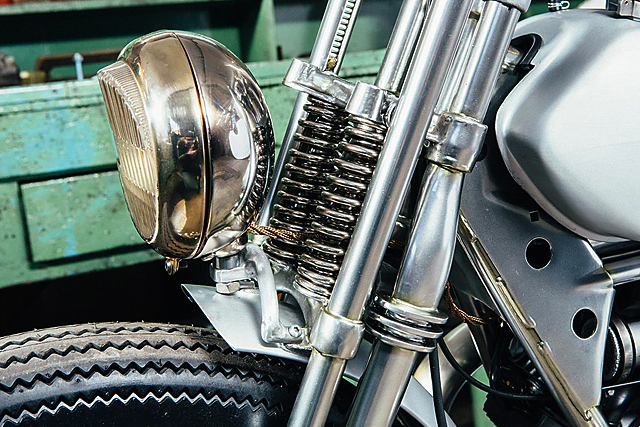 For now the paint on the metal work would have to wait until other modifications had been made but with the engine sitting on its own it was stripped of its factory black and coated in silver as a sign of things to come. The all new 853cc V-Twin is not simply a stroked version of the old V7 unit but comes as part Moto Guzzi’s commitment to bring new technologies to their retro range. The engine is controlled by the complex Magneti Marelli Mechatronic Integrated Unit that not only takes care of supplying the right amount of fuel and spark, but also operates the two stage traction control and can be wirelessly connected to a smartphone. All of this wiring and hardware had to be neatly hidden under the new, even smaller tank, and meticulous attention to detail ensures everything is out of sight. Of course anything custom and the words “Euro 4 Compliant” just don’t mix, so a set of custom pipes gives the new torque laden engine the soundtrack it so richly deserves. 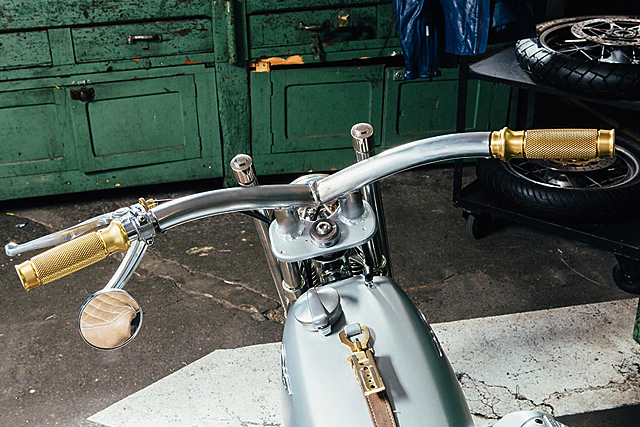 Having gone for such an unusual suspension setup on their first build they couldn’t leave the conventional twin shock setup in place. It was decided this time both front and rear would come in for a major change and the frame was given the necessary strengthening and bracing to handle the changes to come. Out back OMT fabricated an all new mono-shock conversion that utilises only the vital components of the shaft drive with new upper and lower mounts welded in place. Much of the swingarm and rear section of the frame was then drilled for weight saving and visual effect and the strength of the chassis re-tested. Happy with the results a new subframe had to be fabricated now that the twin shock setup wouldn’t be providing additional support and takes its lines from the main frame. While the rear is all new school, the front is straight out of the history books with an in-house fabricated springer front end based on a 1903 design. 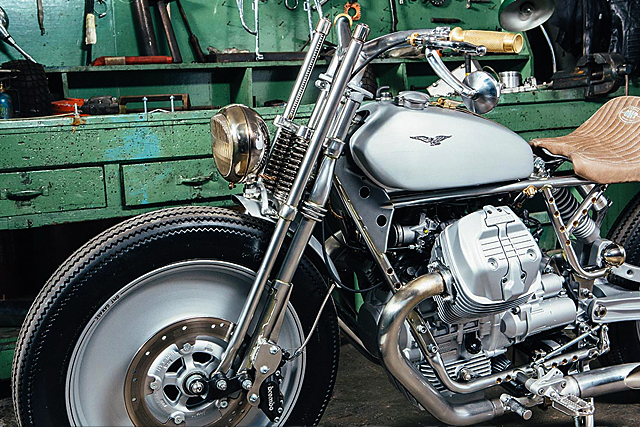 With the front ended loosely fitted up to the frame it couldn’t be finished off until the new 19inch rims front and rear were in place to be able to finalise the rake and trail. But rather than lace up a set of rims to the standard hubs or order in a custom set the brothers Troiano opted to make their own. With such a limited budget this might seem like a smart idea but making wheels from scratch is no easy task and they’d soon discover a problem they hadn’t anticipated. While the solid front wheel crafted from aluminium billet came together as they had hoped the rear presented a huge problem. Needing to maintain the rear shaft drive hub meant welding it to the newly created aluminium rim, such a process is hard enough utilising one common material. But with a combination of metals and the intense heat that welding creates, cracks appeared as the newly constructed item cooled. Even with all their efforts to make a wheel from scratch that tracked dead straight, with a day to go they couldn’t get the cracking to stop. 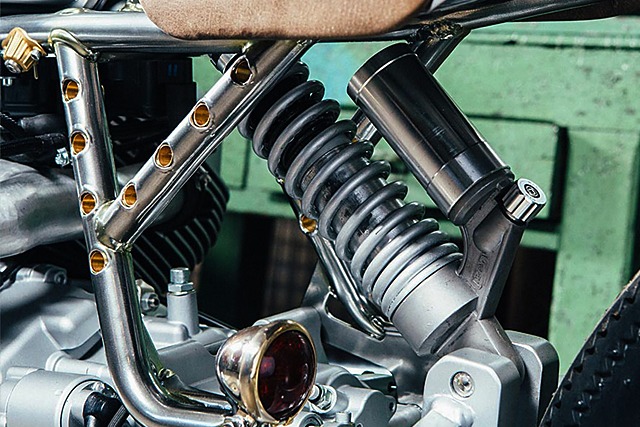 One final attempt and the brilliant brothers came up with the idea of controlling the cooling process by placing the entire piece in the oven and lowering the temperature 10° per hour, Perfetto! With the Firestone rubber fitted up, the appropriate length rear shock could now be chosen and the progressive rate spring and remote reservoir unit do the fabrication work complete justice. The final welds were made to the front end and a bracket attached to support a Brembo caliper clamping the single front disc. With the bulk of the fabrication work now completed silver paint was applied to almost every surface to highlight the fact that the bulk of the parts the brothers have constructed was done with high-end aluminium. A brass headlight is attached low over the front wheel to a heavily bobbed fender that is unique touch to the usually fender-less springer design. 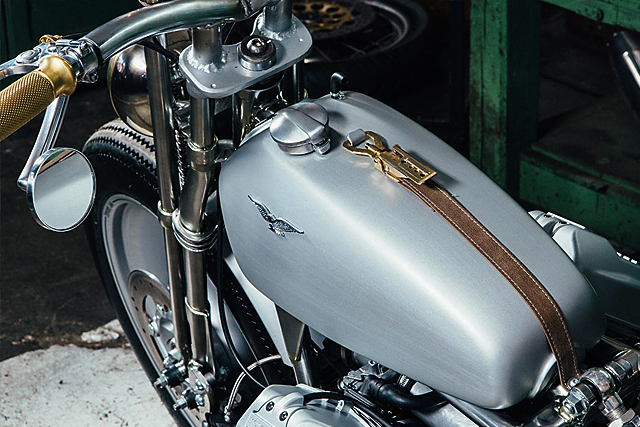 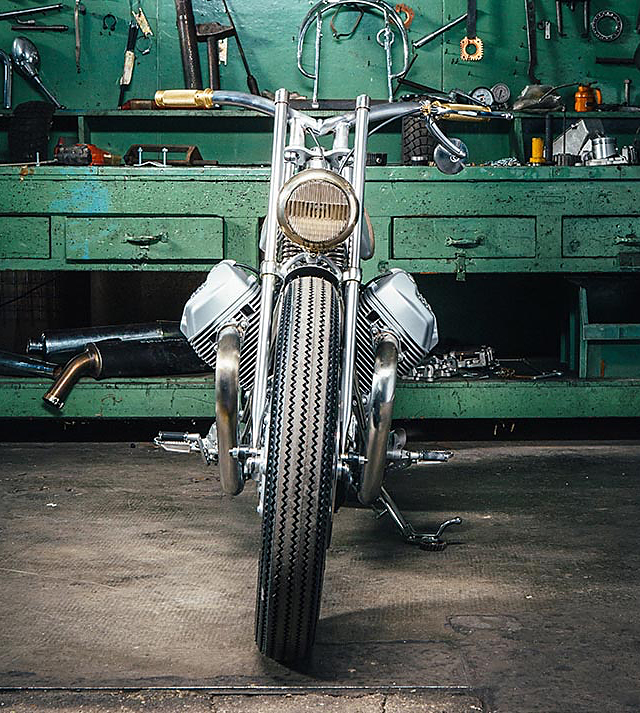 With time almost out the brass grips were fitted up to the newly fabricated handlebars, but here came their one regret “In the initial design of the handlebar all the cables had to be internal and hidden, unfortunately the clutch cable was too hard to be grafted, so after removing all we had to use a classic lever.” Time just wouldn’t allow for the work needed to get the clutch cable hidden but with such a limited amount of time to work with and the sheer amount of fabrication undertaken it’s a miracle this was all that was left “unfinished”. Presented to a large TV audience alongside their rivals who had constructed everything from sidecars to bobbers out of their V9’s the judges, after a great deal of Italian pomp and ceremony declared OMT Garage the fitting “Lord of the Bikes”! 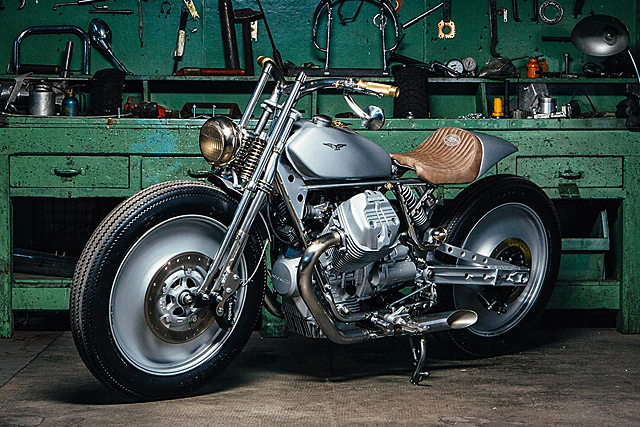