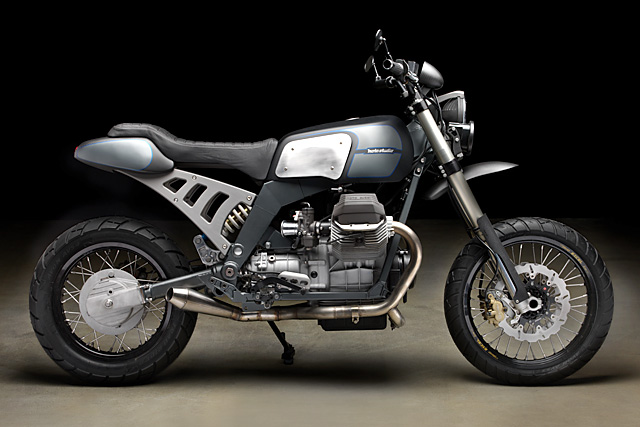 http://www.moto-studio.comHumans have been living with earthquakes since time immemorial. And seeing as though 21st Century technology is only just beginning to understand them, you can probably understand why pretty much every culture on earth has their own ancient explanation as to what causes them. According to ancient Japanese mythology, earthquakes were cause by a giant underground catfish named ‘Namazu’. And in Siberia, they believed quakes were caused by the giant mythical sled dogs that pulled the earth stopping to scratch. And while the Romans believed that their god Neptune caused earthquakes, their very cool name for them – ‘Terremoto’ or ‘Earth Mover’ – just happens to be the moto-esque name of today’s feature bike. It’s a killer Moto Guzzi from Miami’s Moto Studio, and if you’re into scramblers we’re pretty sure it will rock your world. 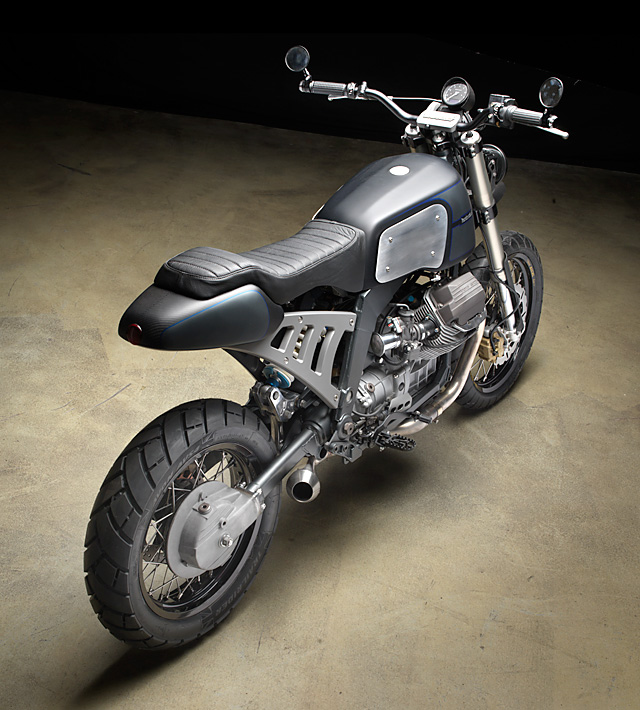 Moto Studio’s two main protagonists, Max and Bruce, gave us the low down on how the bike came to be. “When Moto Studio set out to build a ‘scrambler’, there were plenty of options,” says Max. “We could have gone light; maybe a MotoGuzzi V50 or a Ducati Donor. But when we met with our client (and now friend) who happens to be six foot five inches tall, the only choice we had was to go big.” And so ‘Terremoto’ was born. Starting with a Moto Guzzi Quota 1100, a bike that’s about as common as it is attractive (i.e. not at all), the design team got to work. 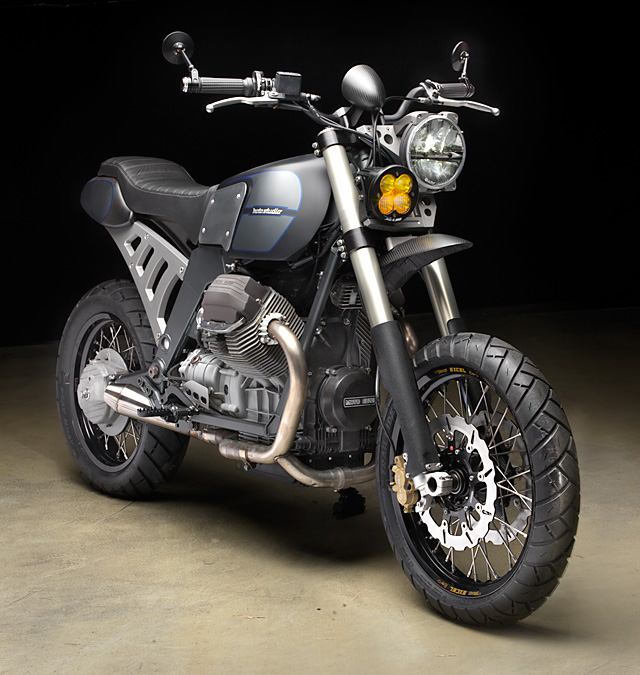 The nature of the project meant that Bruce, Moto Studio’s founder, designer and fabricator, had to run head-long into uncharted territory. The real challenge here was to creating a rear sub frame that would not only support a full-sized rider, but also work visually with the bike’s twin spar frame. Replacing the plastic gas tank provided another daunting challenge; to this end a Kawasaki tank was halved, thinned and then meticulously welded to create a perfect fit. On top of this, some unique and hand-formed removable knee guards protect the tank’s subtle yet impressive paint job. 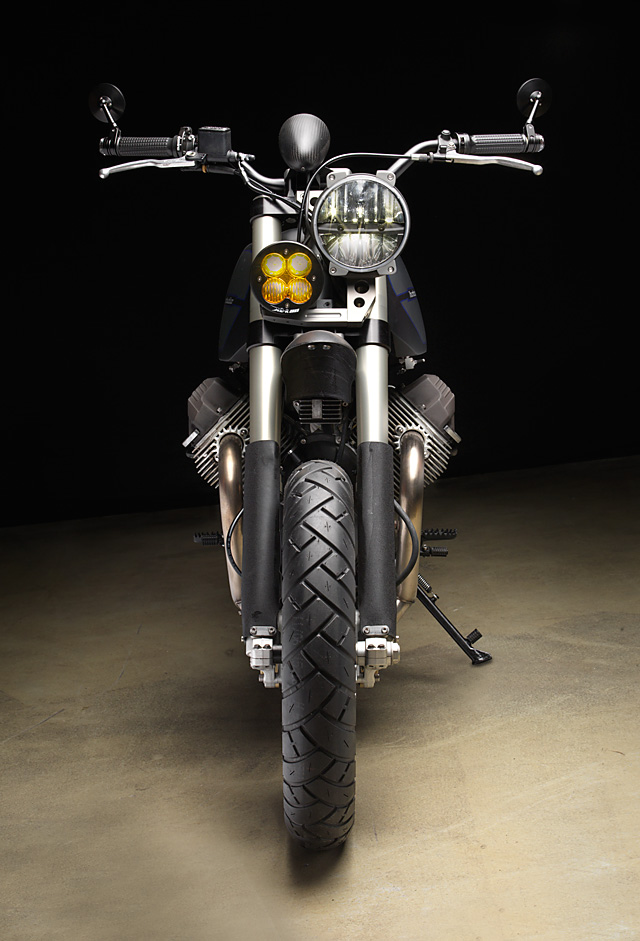 The front end was sourced from a KTM EXC that was cleverly fitted with axle clamps from a KTM 950 adventure to allow dual front discs. And the wheels alongside are tubeless items from Woody’s Wheel Works in Colorado. “As this bike will probably see some decent adventures, a seriously spec’d 9500 lumen driving light from Baja Designs should help the rider illuminate the way.” Illuminate the way, and blind a few bugs, too. 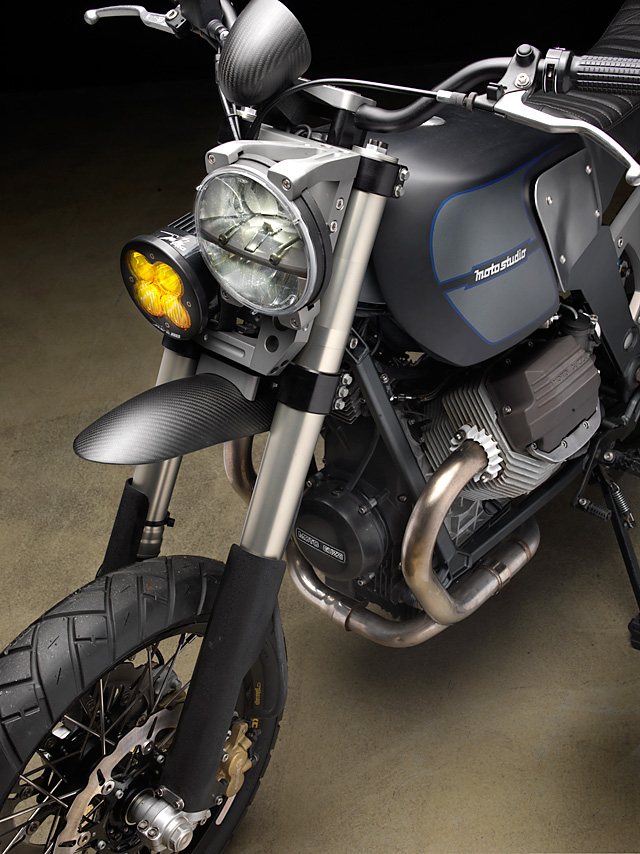 As with all Moto Studio builds, all electronics have been replaced with some el primo goodies from Berlin’s Motogaget. And with the removal of the factory fuel injection system, a Sachse Electronik unit handles the ignition duties while the big twin now breaths through a new set of 36mm Delortos. When asked about the exhaust, Max says “the two into one creates a big bass note and certainly announces the arrival of Terremoto in a suitable fashion.” Hell yeah. 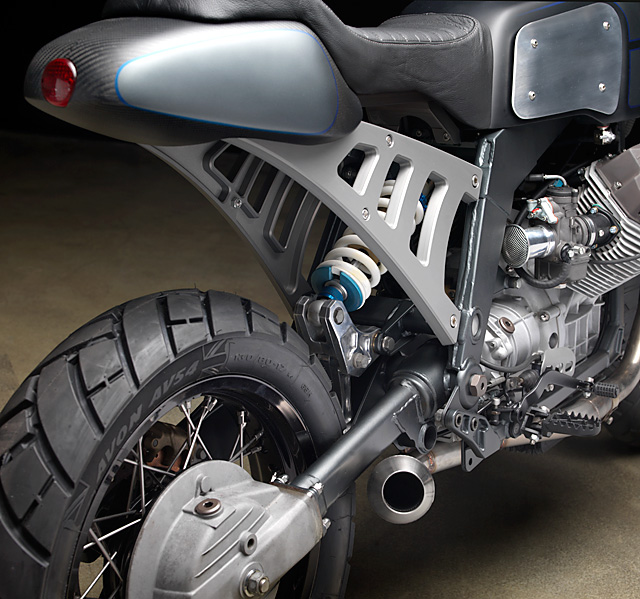 “The creative inspiration came from several places,” say Bruce. “Firstly, we wanted to create a road-worthy dirt bike. We also very much like the style of many of the European dirt bikes from the ‘70s and ‘80s. It’s also influenced by several different adventure bikes, hence the headlight array. The aluminium knee plates were influenced by the loop frame Moto Guzzis of the ‘70s, as well as certain Husqvarna dirt bikes.” 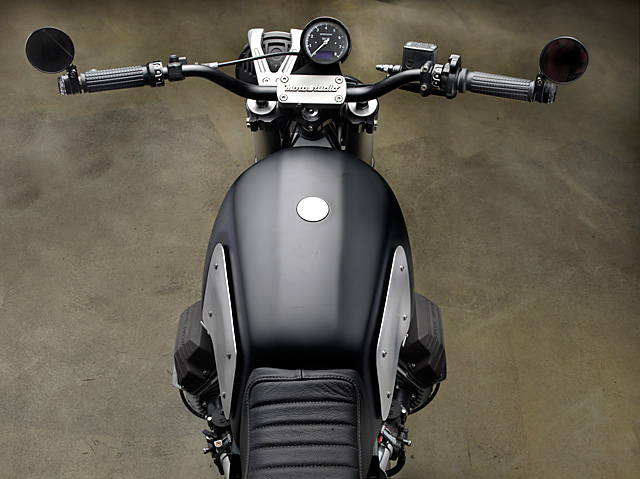 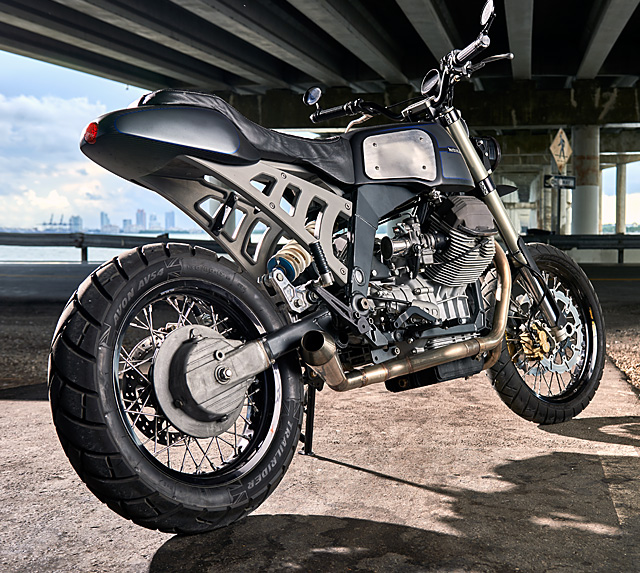 When pressed, the lads nominate the subframe as their favourite part of the build, and it’s not hard to see why. While its construction is quite contemporary, it also works aesthetically with the frame, tank and seat. ‘It also yields a fantastic riding position,’ says Bruce. And the biggest challenge? “Finding a gas tank that would work with the twin-spar frame. But after the Kawasaki tank was sorted out, we were able to get the look we were after.”

So if you happen to be in downtown Miami in the near future and you feel the ground move beneath you feet, don’t panic. It’s more than likely going to be a happy customer of Moto Studio’s going for a ride. Either that, or it will be a giant Japanese catfish. 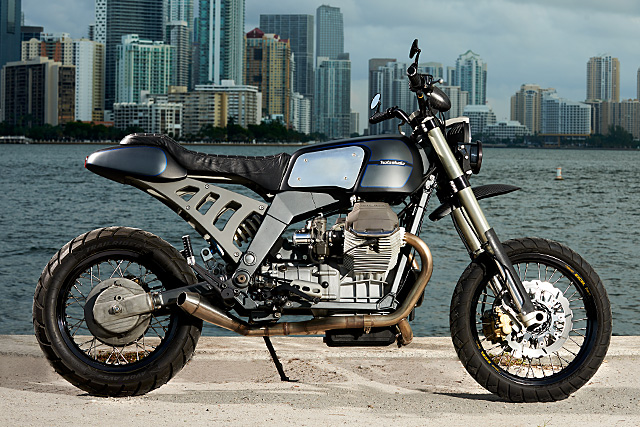