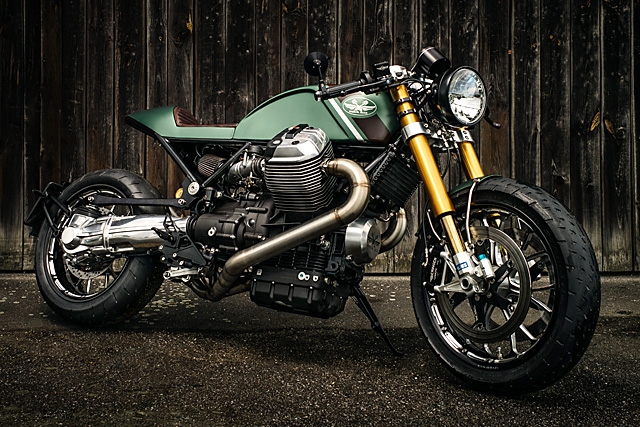 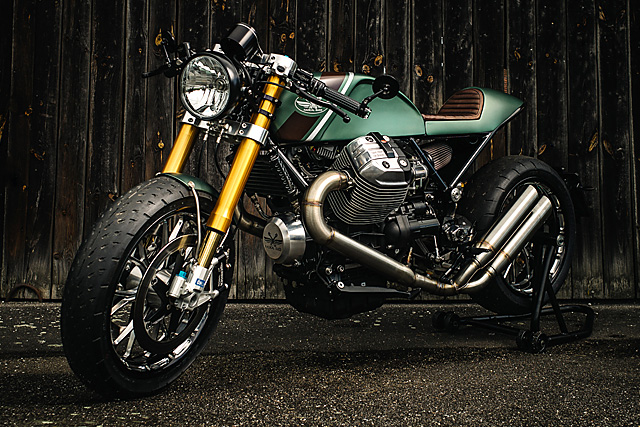 Not only has Moto Guzzi always been a company of Emozione e Passione (Emotion and Passion), they’ve also been pragmatic along the way. In the early ’50s the company was dominating on the race tracks of the world, wins at the Isle of Man TT and a five-year unbeaten streak in 350cc GP racing was just part of their resume. But as the Italian economy declined the company quit racing to ensure their customer bikes didn’t suffer in the down turn.

One of the many lessons they learnt from their dominance in racing was they sure could build a V-Twin, 18 years after its development the gorgeous Bicilindrica 500 was still winning race. This ability to develop technology that would stand the test of time was further enhanced with the brilliant frame designs of Lino Tonti who focussed on mass centralisation, lightweight and a compact shape that when combined with the new 90° V-twins created a formula in the 1970s that lives on in the Guzzi line up to this day. 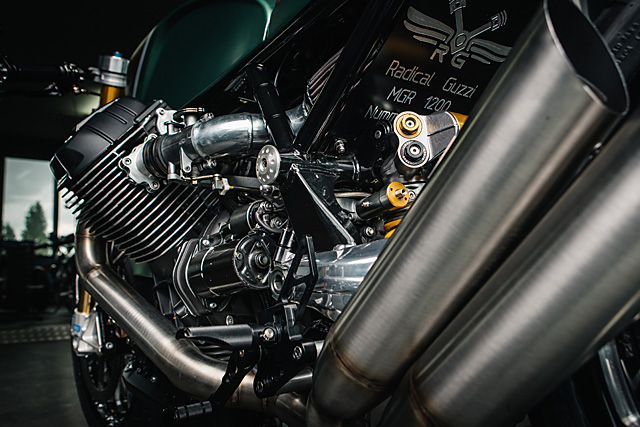 It was with this in mind, that with the backing of Moto Guzzi, that Radical Guzzi’s head honcho Stefan Bronold and designer Kai Riemann penned the MGR 1200 project. An attempt to encapsulate all that is great about the Italian brand, throw off the shackles of being just another superbike with 200hp and no soul and create a machine that is neither retro nor super sport. It’s an amalgamation of Guzzi’s proven high-tech break throughs and their timeless designs and what a beauty she is.

To start the project the idea was to use a frame that paid tribute to the Tonti era and with the modern Bellagio model still using the steel double cradle design this would be the perfect chassis for the job. Stefan creates brilliant Guzzi’s and parts for them every working day, but having the pick of anything he wanted from the factory makes for an extra special day. So next on his order list was an engine and with a scan of the catalogue he had a full V-Twin driveline from a Stelvio sent over. 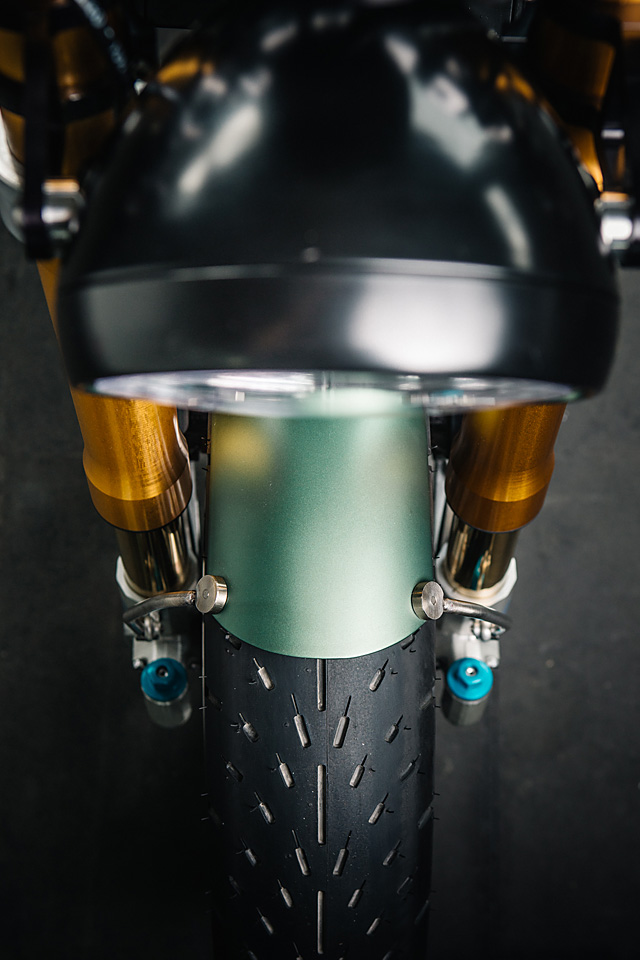 With the two major components on his bench Stefan began to bring Kai’s design to life and the frame has been modified with a new rear end to support the planned metal work. Unlike the factory Bellagio there is no big padded seat here but a beautifully sculpted tail-piece that hugs the lines of the new subframe with barely room to slide a business card between the two. The old textured leather seat provides room just for one and the colour is taken straight from the ’50s icons of the factory racers.

But if the tail-piece is beautiful the tank is simply a work of art; not only has Stefan found a way to best accentuate the lines of a different frame/engine combination but to also create a one-off piece that oozes class and racing pedigree. The knee dents allow the V configured engine to dominate the landscape, while flowing lines and hard edges defy the difficulties of having to work with an internal EFI system that often means creativity is hamstrung in the worst of ways. 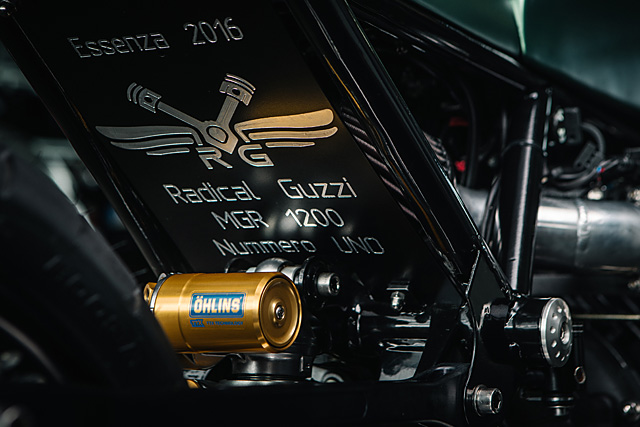 There is no rear fender, instead a protection plate engraved with the projects particulars runs down the frame supports to keep the worst of the tyres debris off the engine and a minimalist front guard gets its support from cleverly crafted round bar struts. The paint work was then applied and is a special tribute to the ’50s factory team colours that became famous around the world.

“Designer Giulio Cesare Carcano insisted his race bikes be given one sparse coat; just a primer to prevent rust”

Today the colour still appears in the Moto Guzzi line up (it’s known as Corduroy Green) but when it was first applied more than sixty years ago it wasn’t a colour at all. The body work of the racers was made from ultra-thin magnesium in an absolute commitment to lightweight and so obsessed with keeping weight to a bare minimum designer Giulio Cesare Carcano insisted his race bikes be given one sparse coat; just a primer to prevent rust and the lightest primer happened to come in Green. Combined with the earthy seat matching brown tone, white stripping and graphics, MGR 1200 takes on a timeless look. 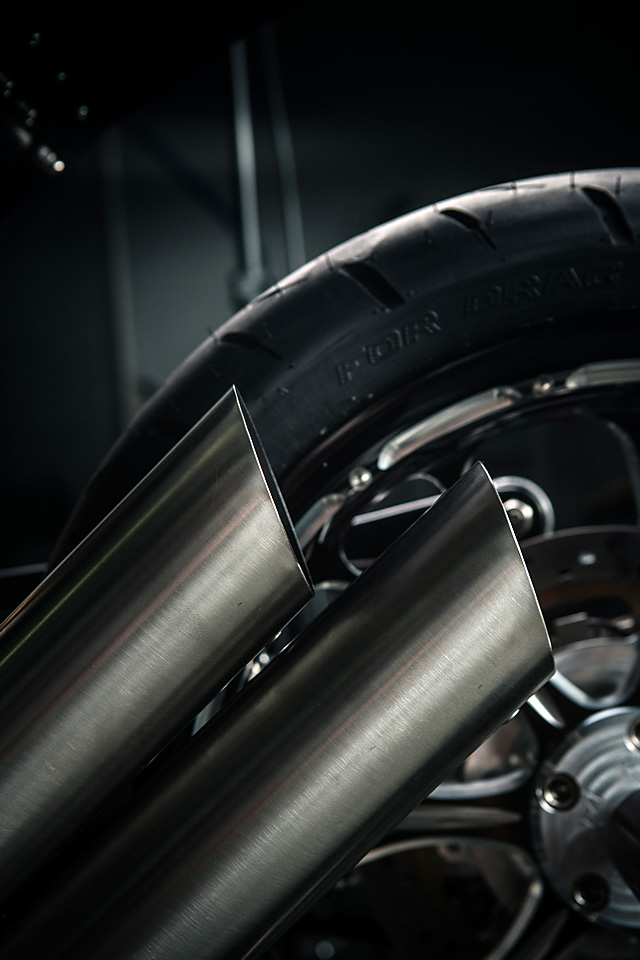 While the Stelvio might provide a 90°, longitudinally mounted, V twin that generations will recognise the technology it packs is only secondary to the brute force it is capable of punching out. The 4 valve engine with 1151cc and controlled by Weber-Marelli electronic fuel injection delivers well over 100bhp but it’s the 113 Nm that make this thing pull like a freight train. But what allows it to do so in such smooth and refined way is the manner in which Guzzi integrates the entire drivetrain “The combination of a single swing arm, mono shock suspension, integrated CA.R.C shaft drive and modern technology.”

But there was no chance that Stefan would be happy to leave it stock and the huge twin 50 mm throttle bodies are fed fresh air through an exposed filter arrangement and stunningly TIG welded aluminium intakes. The exhaust gases are then expelled through a one-off stainless system built from large diameter pipe that runs under the engine to the left side of the bike where it howls into the night through twin slash cut pipes. 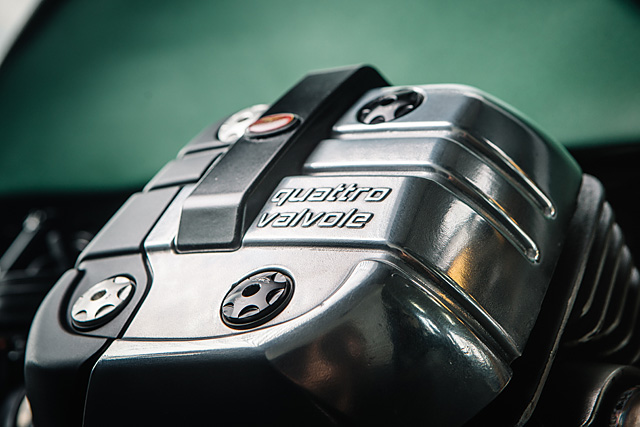 With all that power on tap in a lightened setup, “Öhlins racing suspension, in 43 mm upside-down front forks and the TTX-rear shock leave nothing to be desired in terms of suspension setting.” The choice of the full Öhlins package with the companies infinite number of replacement springs and endless adjustment are essential in dialling in the unique frame and driveline package.

So having gone big in the handling department the brakes are no different. Behringer braking technology supplies the radial front brake pump, two Behringer radial mounted four-piston mono-bloc calipers with 320 mm floating disc converting all that kinetic energy into heat that can be wisped away by the passing breeze. While the wheel and tyre choice was vital for Kai in telling part of the machines appeal “The 120/70 front and the 190/55 rear tyre mounted on the lightweight CNC shaped 17” Rev-Tech Aluminium wheels underline the sporty aspiration of the MGR 1200.” 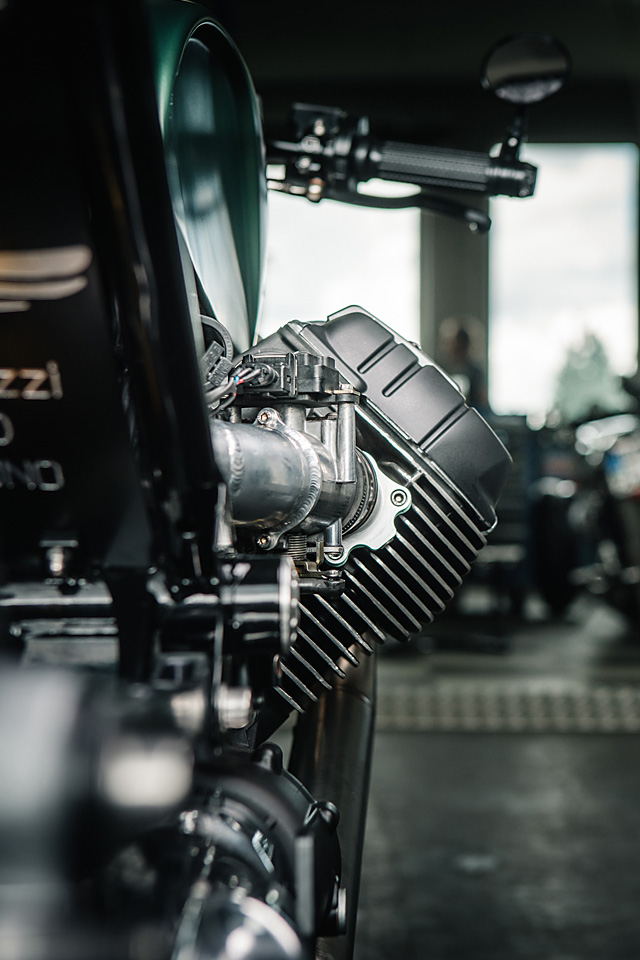 Everything else is kept minimal; a small battery hides under the tail sections hump, while a classic round headlight and single speedo embrace the timeless nature of the build. Bar end mirrors let you watch the scenery disappear behind you as the big twin gets itself wound up but ultimately it’s all about the riding experience and capturing everything that Moto Guzzi fans have come to know and love in one inspirational package for all to admire.

This is best explained by the man who builds Radical Guzzis for a living, and was entrusted by the brand for such an important project, Stefan Bronold. “Cool rules; two wheels, two cylinders and 1200cc. That’s the basis. A regulation that let the creativity of the customizers run free. This project concentrates on what many motorcyclists prefer – the essence. Not on €200.000 customized bikes nor on 300 km/h, 250hp super bikes. The focus is on the essence. On the reduction.”

Thanks to Moto Guzzi Germany.