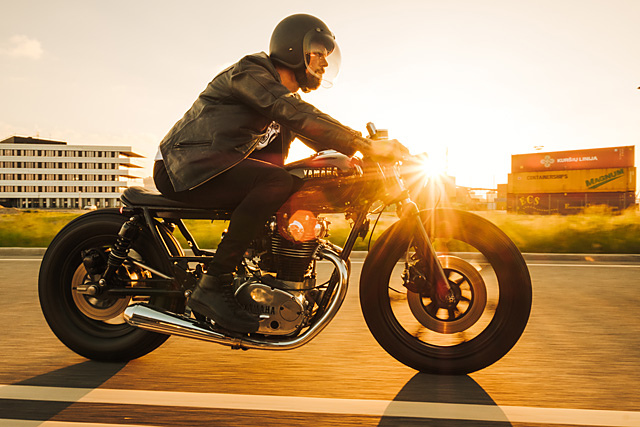 If you happen to be lucky enough to own multi motorcycles and ride everyday then the chances are you have a more “sensible” bike, maybe even a stock modern machine, to get you around on weekdays. But when you run a custom bike shop even your everyday ride is going to be something different, you might use it for the commute to work or the lunch time dash to the bakery, but it’s still going to be something a little special. For Tommy Rand, Co-Founder of Relic Motorcycles from Aarhus, Denmark, he wanted his own daily machine to be something timeless, a bike that would survive every fad and trend and still be able to ride it in his old age. With a love for the bikes and everything that was motorcycling in the 1970’s and Relic describing themselves as “experienced bike-builders who favour and restore Japanese bikes from the 70’s & 80’s,” a classic cafe racer based on a 1980 Yamaha XS650 made perfect sense. 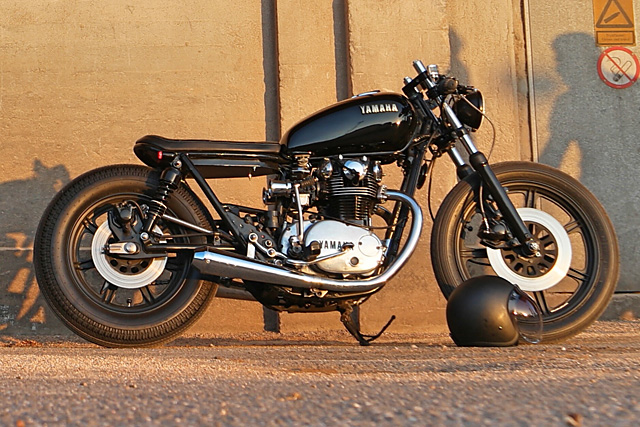 Take a look at any Relic Motorcycles custom build and whether it’s Japanese, British or European all their bikes have a classic look, generally with a black or white colour scheme and a down in the weeds stance. They know what they love and they do it well, with each machine from mild to wild still retaining the ability to be street legal and plenty of fun to ride. But while many of their builds take on a slightly sinister edge Tommy had a different theme for the XS “With this build I wanted to make a classic cafe racer in black and steel. A bike that would be cool for both jeans and leather jacket or a suit.” And with the 2016 Distinguished Gentleman’s Ride just run over the weekend it’s the perfect time to feature a machine that’s perfect for the man in a suit; but first Tommy had to build the thing. He’d been on the hunt for a low mile, good condition XS650 for quite a while when a friend of his parents heard what young Tommy was doing for a living. 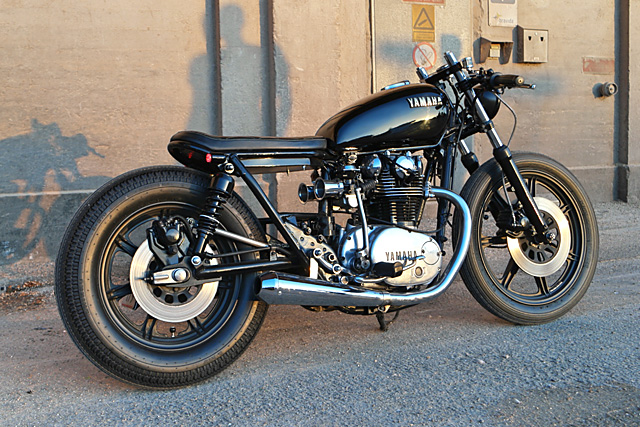 As coincidence would have it he owned a 1980 XS650 with just 25,000km on the clock and in very reasonable condition; finally the search was over! “I have always believed that Yamaha XS650 was one of the most beautiful motorcycles.” So to ensure that beauty lived on the bike was taken back to the frame so it could be refurbished and given a fresh coast of factory black. The rear subframe has been reworked to create cleaner lines and a simplified look with the rear section cut off and a new hoop with a slight up kick welded in. Underneath a neat rectangular box was first fabricated and then welded to the frame to store all the electrical components in one neat and tidy application to allow the mechanical fundamentals to really stand out. Sitting on top of the new rear is a gorgeous black leather seat featuring white diamond stitching. While the stock tank with its very British lines was given a new coat of black paint and the badges restored for a clean and classic appearance. But with the Japanese firm really looking to take it to the British they needed more than just the tank to have the right look and the XS650’s now world renowned engine took its parallel twin styling cues straight from Old Blighty. With the near 40 cubic inch, air-cooled, twin being a solid runner Tommy spent most of his time getting it looking better than the day it rolled off the factory floor. The finned cases were repainted; while plenty of elbow grease was spent polishing all the covers and ensuring all the fittings looked like new. The twin carbs got a thorough overhaul on the inside and then the bodies painted black with the tops and float bowls polished before a beautiful set of velocity stacks were fitted up. The exhaust is classic to a tee, not only providing the sound track the lovely twin deserves but the chrome from front to back, finishing out with reverse cone mufflers is exactly how it should be. 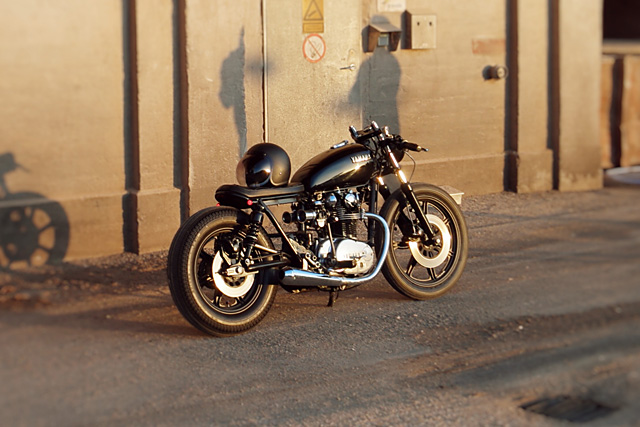 For the stance Relic might like their bikes buried as close to the ground as possible, but that doesn’t mean they cut corners, cut springs and be done with it. No, their bikes might be low but they do it the right way and the stock front forks have been rebuilt and properly lowered with progressive rate shorter springs and the appropriate fluid to match. The legs have been given a coat of black paint, the dust covers replaced and they are clamped at the lower end by the stock bottom tree. But the upper clamp, a Relic CNC machined triple tree, provides extra stiffness to the front end for more precise steering and a far cleaner look. At the rear a set of super low, dual progressive wound shocks in black provide adjustability to the preload and ensure the back doesn’t bottom out without sacrificing too much in ride quality. The brakes are hydraulically clamped single discs front and rear with many feeling it provides the best balance for a street bike over the never quite sorted twin disc setup offered on some models. 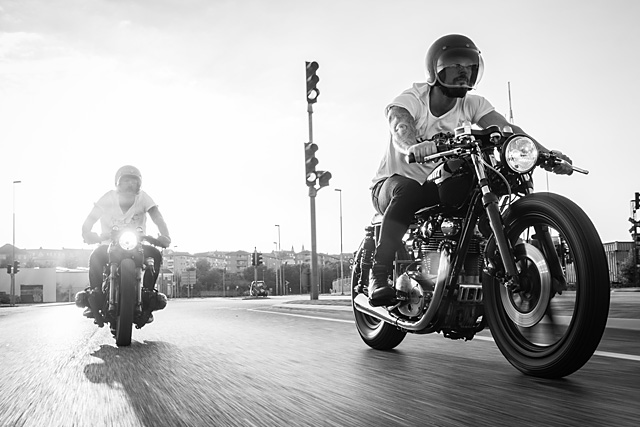 With the XS650 going to be part of Tommy’s personal collection for many years to come and not afraid to ride on any surface he sent the Yamaha mag wheels out for a layer of hard-wearing black powder coat. Before being bolted back on the front was wrapped in an Avon Speedmaster MKII and the rear gets the same classic feel with a Shinko E270. Steering the rubber in the right direction falls to a set of CNC’d adjustable clip-ons mounted low on the forks between the trees with the ever timeless Vintage Grand Turismo style black grips fitted up. An aftermarket master cylinder provides extra power to the front brake that it feeds via a steel braided line, with the fluid on display thanks to a clear sectioned reservoir. There are alloy adjustable levers with black clickers to match the colour scheme and out back a “Mini LED rear light in piano black, placed on the side of the black frame, to make it disappear visually.” Given the minimalist look and the period he was going for there was really only one headlight to fit and that’s a black Bates unit on a custom mount. Finally all the information Tommy needs out on the road comes from a vintage mini speedometer that is mounted into the custom CNC’d top triple tree. Modern motorcycles come equipped with so many switches, rider modes and fancy colour displays that it’s a wonder their owners find the time to keep their eyes on the road. But for Relic Motorcycles the feedback they prefer is that which comes through the grips, the throttle, levers and most importantly the seat of the pants. For Tommy it’s about staying true to his classic roots, keeping it simple and creating a bike “that I would love to ride even when I turn 60.” 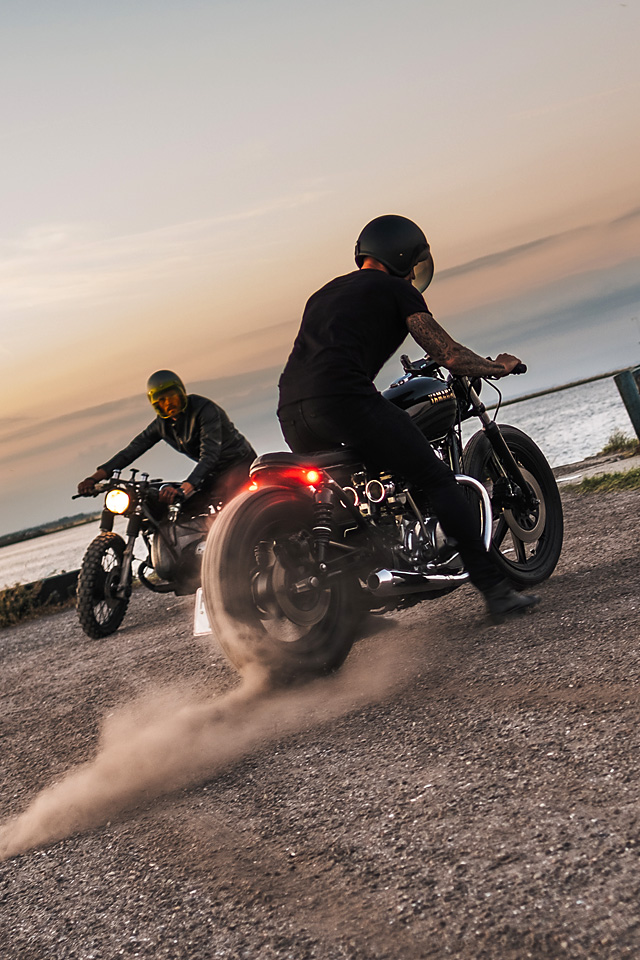