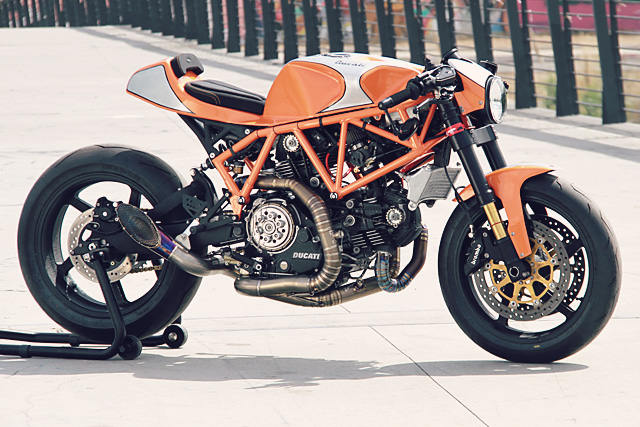 Not every project is a smooth one, they can start and be halted for months at a time, life gets in the way, parts can be hard to find and when you finish you can still be left with doubts as to whether you’ve achieved your goal. So after years of preparation there could be no more intimidating place on the planet to debut your custom Ducati than at the annual World Ducati Week amongst the fanatical Ducatisti. But Marco Graziani needn’t have worried as his CC Racing Garage custom cafe racer took out the top prize in the Ducati Garage Contest at the 2016 WDW and also took home the trophy from the riders’ jury, consisting of Davide Giugliano, Danilo Petrucci and Eugene Laverty, who presented him with the sought-after Ducati riders’ award. It might have started life as a 2001 Ducati 900SSie, but plenty of other Bologna bombshells have donated their parts to bring this trophy winner to life. 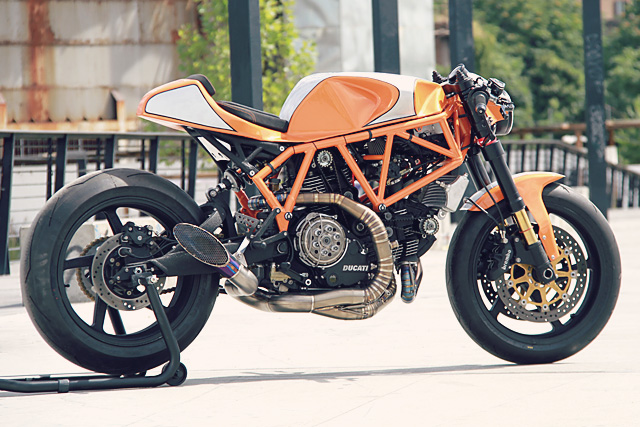 “The project started about two years ago, in July 2014, in the garage I had a Supersport 900 I used at the track for fun; unfortunately, since the time available to run on the track was virtually zero, the bike remained unused for long periods.” So Marco considered selling the bike but the low ball offers he got meant it was worth just keeping it on the market and parked away in the garage. Finally after it had sat and sat he gave it until the end of 2014 to sell and if it didn’t he do it up as a simple cafe racer and hope that would help it fetch a few extra euros. But custom bikes and simple, let alone just a handful of cash never go together. Surfing the net Marco kept coming back to the incredible designs of Simone Conti and decided to wait in line for his services, sure it would mean more down time but the wait would be worth it. With the Ducati in Simone’s hands by March 2015 things really started to get rolling on the build and the next time Marco would see the direction his bike was heading he realised not only was it something much more special than he first imagined, he loved it! 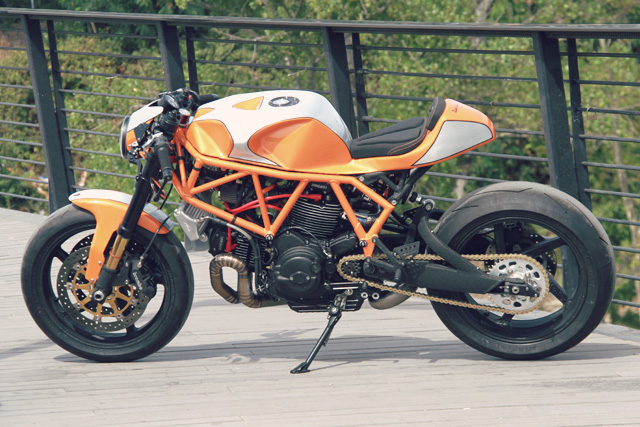 The first step in the process after the design had been finalised was to take the single tubular chrome moly steel trestle frame and cut it right back, removing all the tube work that would normally support the two up seat and rear fairing. A clever new removable subframe was then fabricated that bolts to the mainframe and only consists of enough steel to support the single seat and nothing more. With all the body work off the SS, including the tank, an entire monocoque was created from aluminium to form a single piece that makes up an entirely new tank, seat and tail section. But as hard as crafting such a piece is, Simone’s design called for more than just a simple monocoque but one that incorporated both form and function in a unique cafe racer styling. The tank’s angular lines result in aggressive knee dents and sculpted pockets for the clip-ons to be allowed maximum turn. While the seat and tail piece unit incorporate traditional cafe racer elements and modern superbike aesthetics for an aggressive finish to the design. 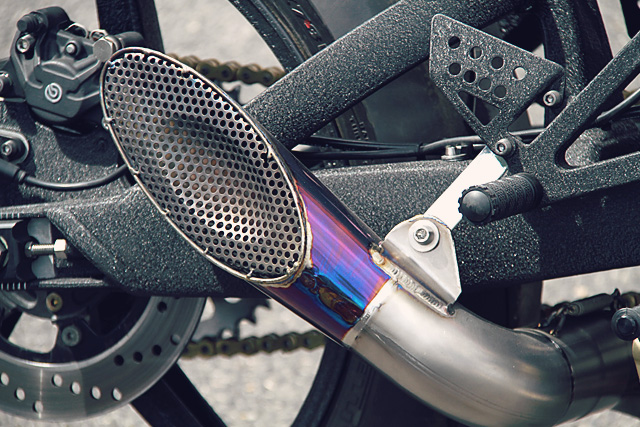 Still working with alloy, a neat bikini fairing was made to tightly tuck around the headlight that had been chosen for the project. And having crafted all the body work from scratch it seemed to make no sense to leave the bulbous stock front guard in place and it too is a custom piece shedding even more weight. “After that was built a new battery holder and a new recovery box for integrated oil vapours in the rear frame was made, all strictly aluminium,” explains Marco. With a bare frame and naked alloy it was over to friend and coach builder Emanuele to sort the colour out and he had some bold ideas. “Initially I was a bit sceptical, but eventually convinced” and the result is a mix of textured crinkle coat paint on the subframe, engine and swingarm. While the bodywork received some big dollar paint in the form of genuine Lamborghini Orange from their latest range of supercars, with silver accents used throughout, all broken up with black pinstripping. The unique seat pad design with separate hump support in true GP style is an all black affair with paint matched orange stitching. 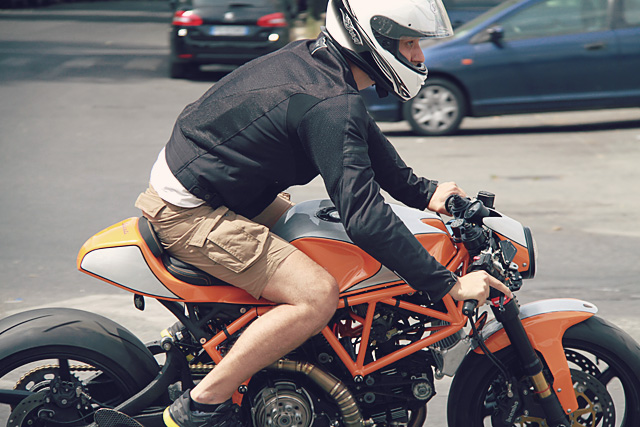 One of the reasons Marco had chosen the SS for the track was its mechanical simplicity and its brilliant handling and this has only further been improved. The standard Showa front forks have been given a total rebuild to match the new lightweight before being given a coat of black and gold anodized stanchions. The rear suspension setup is Ducati’s progressive linkage with the shock swapped out for an Ohlins unit with full adjustability, originally intended for a Ducati 1000SS. But before the suspension was reassembled Marco sought out the help of his good friend and machinist Samuel who crafted a stunning set of triple trees in his CNC machine that further reduce weight and build in extra rigidity to the front end. As a man who knows his way around the track and doesn’t mind keeping the throttle pinned Marco saw fit to bin the stock brakes in favour of a Brembo setup from a Ducati 999 S, that feature twin 320mm drilled discs and dual four piston calipers. 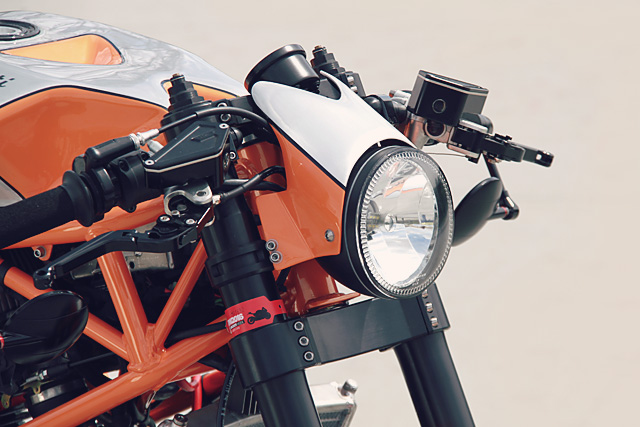 The reason for that extra stopping power becomes obvious when you realise this is no stock air cooled L-Twin. The short stroke 904cc engine with desmodromic two valve cylinder heads has been given a full rebuild with all gaskets, seals and consumables replaced and restored to factory specifications. With the engine apart the cylinder heads have been ported for increased flow and the valve seats cut to his engine builder’s secret specifications. In the bottom end of the engine everything has been rebalanced, coated and new bearings fitted along with a lightened flywheel. Before the short block was bolted back together a Ducati Performance slipper clutch was fitted up, that being a dry unit is on display for all to see. But the externals didn’t escape attention either with better breathing throttle bodies from a Ducati ST2 and the full electronics package from a Ducati 916 wired in. With the wiring normally stored under the seat and tank and that room no longer available a drastic simplification of the loom was required, made easier with Ducati’s high quality fittings. 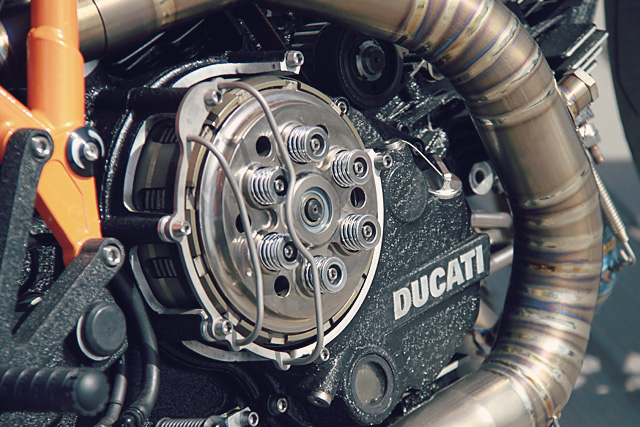 But you simply cannot talk about the engine without bowing down on ones knees and worshipping at the feet of the man who pieced together that exhaust. The masterpiece is the work of Italian exhaust manufacturers Ajko who brilliantly assembled the large assortment of lobster cut pieces with some of the most beautiful welds you are ever likely to see. The whole two into one system finishes out in a hand crafted muffler with an extreme slash cut that is shielded off with meshed stainless. With a final tune of the ECU and the engine pumping out considerably more power over stock Marco had RC Racing manufacturer him a new and larger oil cooler to his specs to be on the safe side. Helping him punch through the gears more cleanly is a new set of rearsets that feature the same crinkle coat paint as the engine on the supports and heel guards. While up front the factory switchblocks sit on a new set of clip-ons that also wear a set of CNC’d fluid reservoirs for the hydraulic clutch and Brembo master cylinder with a pair of adjustable levers feeding in the power. 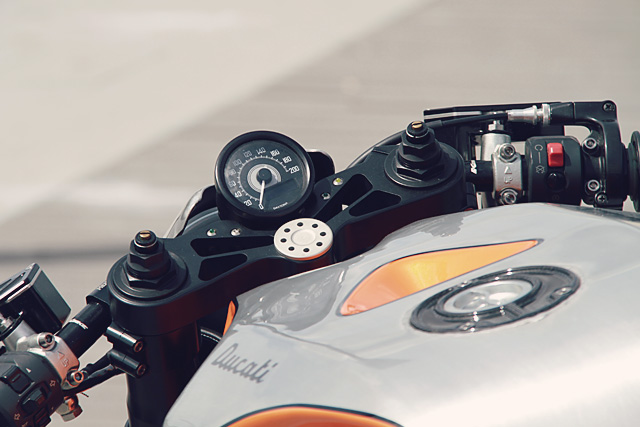 To give the bike at least the semblance of road legality a pair of bar end mirrors have been fitted up that also act as lever guards should the cafe racer hit the track. For the last piece of the puzzle Marco decided to save up something very special, a set of genuine WSBK Marchesini magnesium wheels from a Ducati 888 wrapped in the obligatory Pirelli Diablos. Along with those mentioned the build wouldn’t have been possible without the help of Ducati wizards like Gianluca Azzocchi and Fausto Mattei; and after two years of hard slog and nearly giving up on the build early on, it’s appropriate that when it was all finished and ready for show Marco named his new girl “Grit”. Clearly it was worth all the blood, sweat and tears as it’s a once in a life time experience to have the Ducatisti and some of the factories best riders agree yours is the best of bikes for the year 2016 and now Marco can relax and truly enjoy the fruits of his labour. 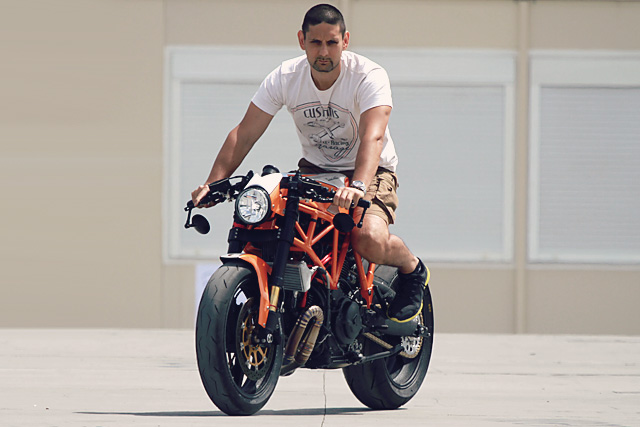