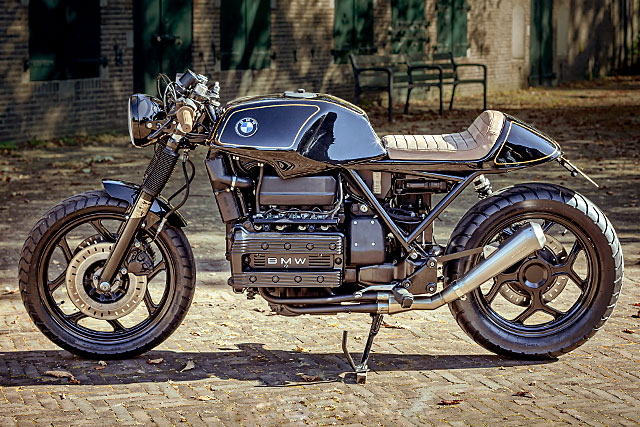 You’re a fly on the wall of a BMW Motorrad meeting in Germany in 1977. Much to your horror, you witness what looks to be the end of the company happening right before your very eyes. Faced with the massive challenges of Japanese dominance, the ‘death’ of the boxer twin and big new emissions regulations, the company’s Kaisers are about to sign off what looks to be a train wreck on two wheels. They are all in agreement; they will put a four-cylinder Peugeot engine sideways into a new BMW bike. Surely this idea is so comical and misguided, it’s the last bike the company will ever make. Fast forward 40 years to the present day and somehow we’re in the middle of a BMW K-series resurgence. Up is down. Black is white. Square is cool. There are bricks everywhere and here’s the latest one to be thrown; it’s the Wrench Kings’ very black, very cool BMW K100. 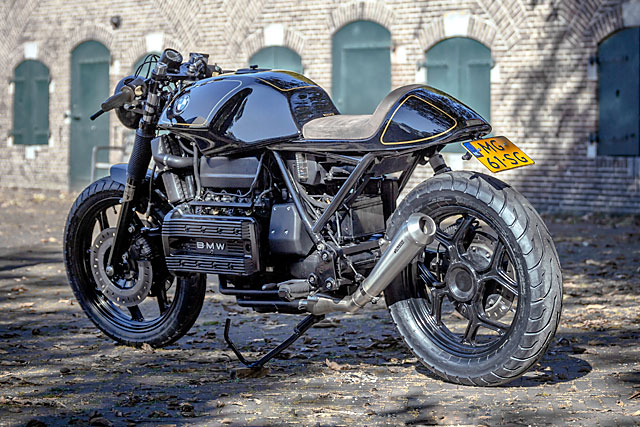 Speaking of boardrooms, the Wrench King’s back story just so happens to include quite a few. “Corporate management and a life in Dubai; that’s the background of Wrench Kings,” says Bram who, along with his regal entourage of Joost and Guido, makes up the shop. “Living in the Monarchy of Dubai, we had an enormous sand pit to play in. Naturally this resulted in big cars, road bikes, off-road bikes, quads, water scooters and even jet skis. All toys with engines and a lot of power. Besides, you’ve got to make use of those low petrol prices, now haven’t you?”

Naturally, maintenance was part of the fun and it often resulted in long nights and fun moments with friends and cold beer in a hot garage. But after years of living abroad and working in the stressful corporate life, they felt the need to come back to The Netherlands for a change of scenery. And so, the Wrench Kings was born. Their aim is a brand based around making high quality cafe racers, trackers and scramblers and if this is their opening volley, we’d put money on them following through. 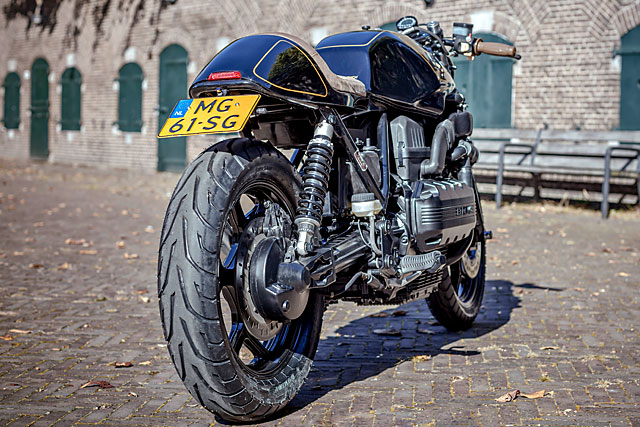 “Clearly the BMW K100 has gained a real popularity in the custom world, and its great build quality makes it a fun bike to work on,” says Bram. He then talks us through the bike’s back story. “Roland, the current owner of this BMW K100, lives in Utrecht. He already had some good connections with his neighbourhood BMW dealer, so he came to us requesting we build a custom from a bike that they had sold him and serviced. It meant that the bike would be in impeccable condition, at least mechanically.” This rather interesting cooperation between the two companies resulted in this; a stunning bike built in less than three months, with all minor and major maintenance issues taken care of. Is this the stuff of dreams? We’re pretty sure Roland would think so. 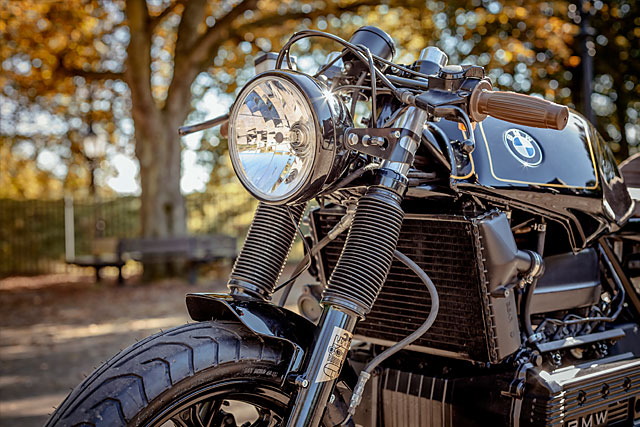 The challenges on this bike are pretty much the same as with any K-series custom. “It was mostly down to the lines and the electronics,” says Bram. “The K-series is known as the flying brick due to its engine and overall chunky looks. It has a big, flat-mounted, four-cylinder injection engine. So to give this bike its classic look, we decided on a piano black paint job with custom gold striping on the tank and the seat. It was quite a serious undertaking but we think the end result was worth it.” Then, to make the fine gold striping stand out, the rest of the bike was painted black, too. The only respite to all this badassin’ blackness was the vintage brown leather seat, upholstered by local experts Toni’s Custom Works. 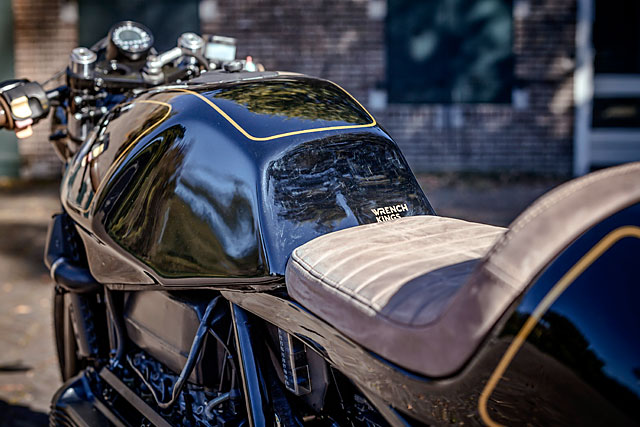 And the electronics? “BMW loves non-standard electronics. Especially when it come to the K-series. The moment you remove the original instrument cluster, you need a relay for the gear indicators. Then you realise that the original speedo only accepts a 6 volt signal. And the blinkers have their own complicated relay that isn’t compatible with modern LED lights.” In other words it’s a complete shit show, and one that Bram and the lads had to wade through before they could call it a day. 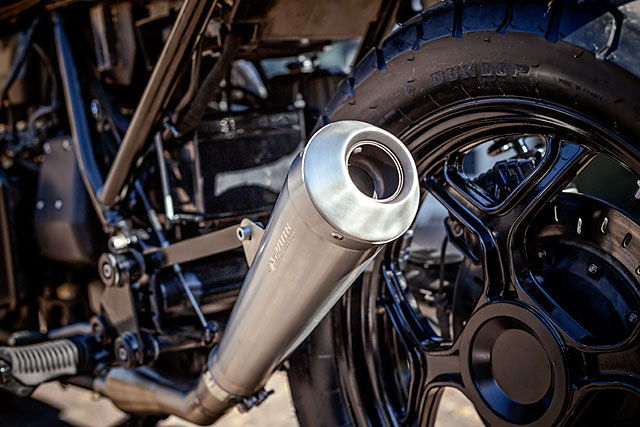 Digging deeper, we asked Bram,Joost and Guido about the specifics. “The gas tank is from a K100LT, which gave the overall build a much cleaner look. And the front fender is also from a K100; we have no idea which one but it’s way better-looking than the original. We mounted some clip-ons and capped them with some Biltwell grips that nicely match the seat. All the controls were then refurbished to an as-new finish.”

“The subframe was then modded so that the polyester seat pan was fully supported by a custom metal frame. This also gives the bike a much cleaner look. To top this off, an all-original leather seat was fabbed up and mounted on top.” We’re pretty sure that no matter what set of buttocks land on this piece of upholstery, they will easily be the happiest in all the land. 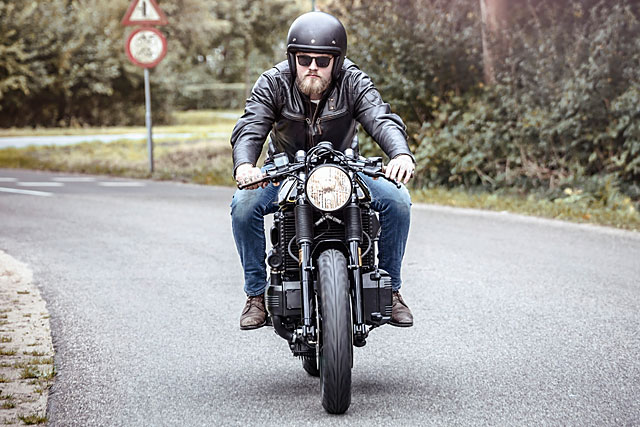 With the end in sight, the non-painted parts of the bike that remained were given the “powder coated everything” treatment. Then a big 7″ Reno-style headlight was added up front and duly complemented with a built-in tail light down the noisy end. Some friendly LED indicators were also included to keep the bigger lights company. A new battery was installed, and all the necessary hair pulling was completed so that a fully functioning Acewell speedo could also be ticked off the list. The final touches included a set of Dunlop StreetSmart tires and a shiny stainless steel collector with a complementary Spark GP stainless steel muffler. 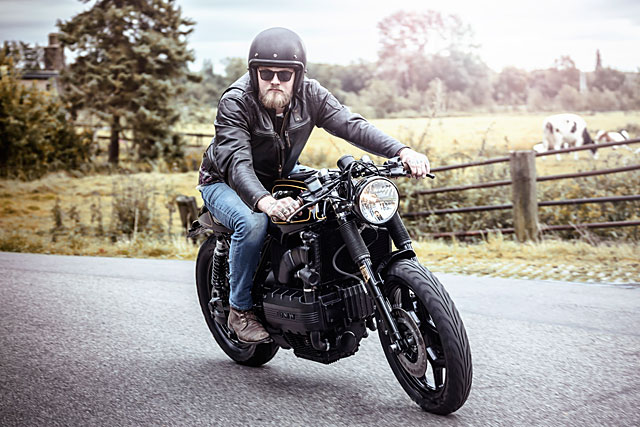 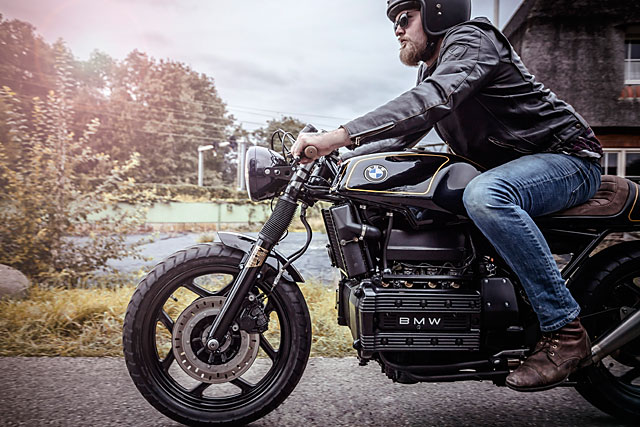 With their bikes recently featuring on Return of the Cafe Racers, EXIF and now here in the noble House of Pipes, it’s clear that the Wrench Kings are on a right royal roll. And it’s not hard to see why. With typical Dutch nous The Kings seem to be making real inroads into Europe’s custom scene, one killer custom at a time. More power to them, we say. Much more. 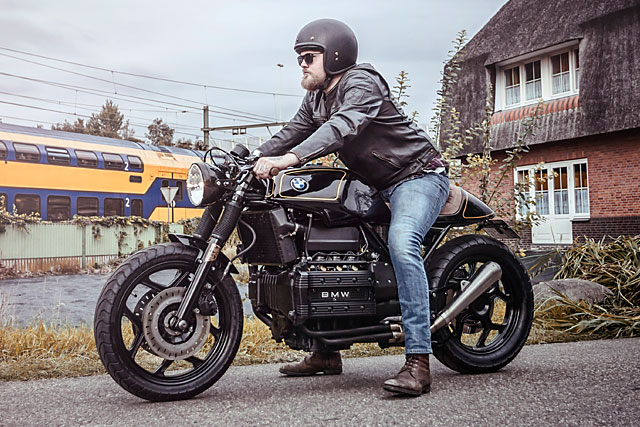