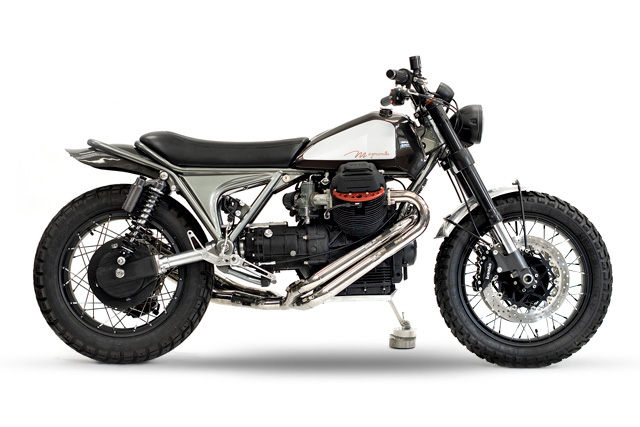 In Italian they call it ‘Monte Vesuvio’, but English speakers may be more familiar with its nome Inglese, ‘Mount Vesuvius’. Responsible for the deaths of thousands of Pompeii inhabitants in ancient times, modern Naples has clearly forgiven the mountain of its past crimes. So much so, the 3,000,000 Naples residents that currently live around the base of the mountain seem to be perfectly comfortable with the fact that their city is now the most densely populated volcanic region in the world. And what could be more Italian than celebrating this great conundrum by riding a beautiful motorcycle up and down the dormant beast? Nothing, that’s what. So don your fireproof suit and buts out your best pyroclastic wheelies as we take a ride on the latest build from Italy’s Officine Rossopuro, a Moto Guzzi SP1000 fittingly titled ‘MagmaMille’. 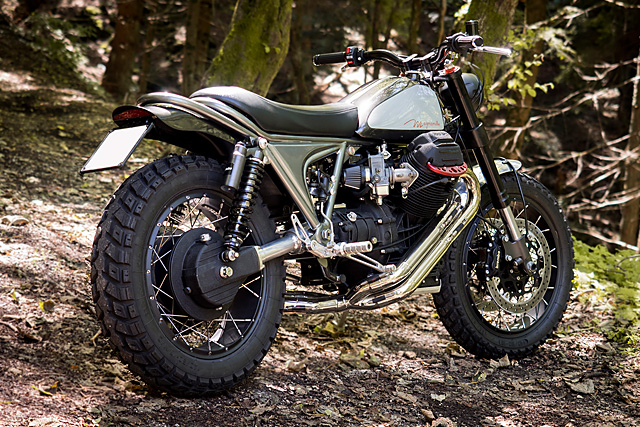 “MagmaMille (or Magma One Thousand, as in the Guzzi’s 1000cc capacity) is like the lava flowing in Mount Vesuvius,” says Officine Rossopuro’s Filippo Barbacane in his beautifully Italian way. “Just a few steps away from the beautiful city of Naples, the bike’s colors remind us of the red of the fire, the gray of the soot and the black of cold rock of Vesuvius.” Never has nature’s sheer, deadly brutality seem so damn sexy.

“Like the city itself, the bike is a completely revised motorcycle. And like Vesuvius, it’s an extreme object with no half measures.” In other words, Filippo has made it to both impress but also to run really, really hard. It’s not a cosmetic re-jigging of a body or the subtle tweaking of an engine, but something much more radical. It’s an entirely new design that has reworked all the parts of the old bike in order to get something completely different. 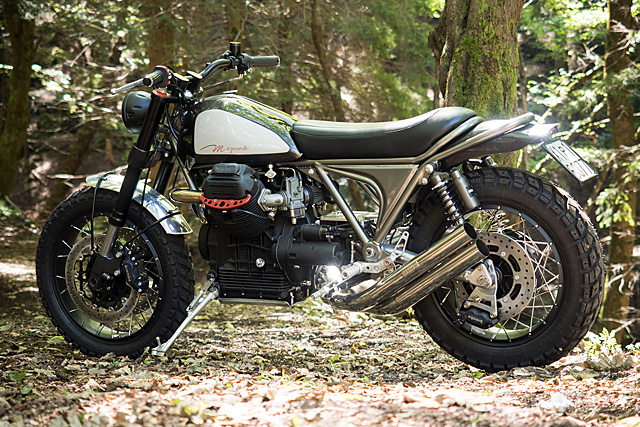 In many ways, a bike like this could only have been built for a Naples local. After all, how many others cities in the world can you ride directly from a downtown traffic jam to scrambling up an unusually warm hill in a few short minutes? “The customer, who is a total and utter ‘Guzzista’, wanted a true urban scrambler. Something that could tear around town while handling the traffic and the typically narrow streets of Naples, yet still be ready at a moment’s notice to tear up the dirt roads leading towards the great volcano.” 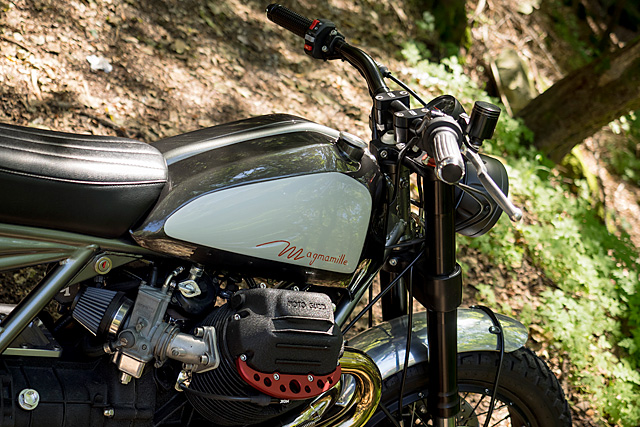 With a touch of red-hot magma

For this very reason, Filippo’s chief goal was to lighten the bike as much as possible, which is why he proceeded to remove the unnecessary elements of the typical Tonti frame. This essentially makes the motor the bike’s main structural support. Also, the rear part of the frame is now completely on show, raised and lightened with that typical ‘double curve’ so often used in bikes from the 60s and 70s. This also allowed Filippo to hide the new electrical system and the lightweight lithium battery inside the two triangles formed by the frame. 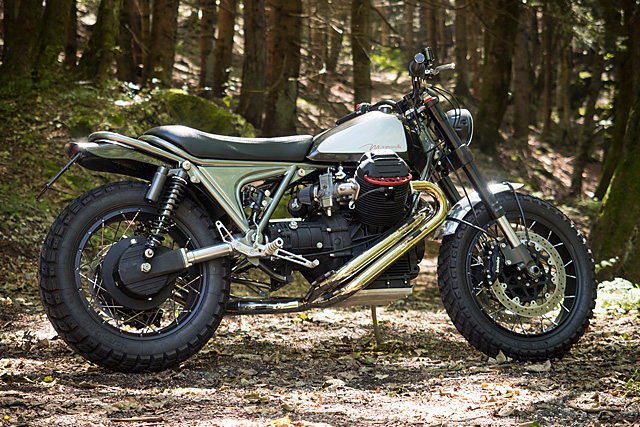 “The use of many aluminum parts, including the engine support, the rear caliper support, the fully adjustable footrests, the risers and the cylinder crash guard all comes from the need to save weight. Naturally, we made them all, and they are all available through our shop,” says Filippo. But the biggest mod here was probably the new aluminium swingarm that’s shaved off many kilos, especially when compared to the original iron unit. This last addition also allows for the mounting of a much larger rear tire, namely a 140 K60 Scout from Heidenau. The rubber allows for both on and off-road fun without one too seriously compromising the other. The spoked wheels are tubeless, measuring 17 inches at the rear and 18 up front. They’re laced with tangential spokes, and fitted with a top shelf braking system incorporating a 320mm Brembo front disc squeezed by twin-piston Brembo calipers, and a rear 240mm disc also with a Brembo caliper. 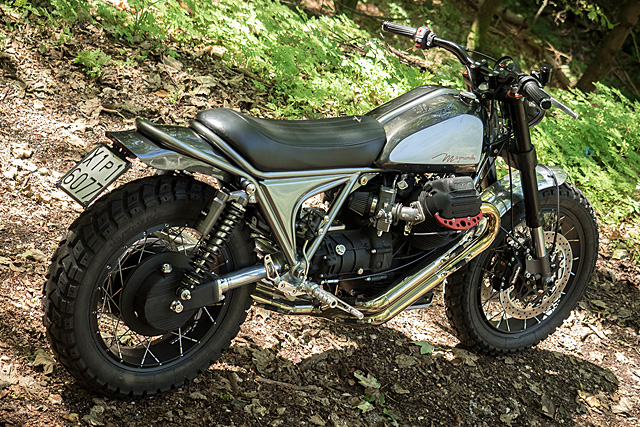 Naturally, the suspension has been treated to a little work as well, with a modern update designed to withstand even the most extreme use. Up front you’ll find a set of Marzocchi 45mm upside-downers, and out back there’s a set of double shock absorbers from Bitubo with external reservoirs.

“The body has also been made keeping in mind the final weight of the bike, but also the simplicity of disassembly and maintenance, too. The tank is made in two separate pieces that are designed for quick removal, and the saddle is a generous size because it’s bike to be used, and not garaged.” 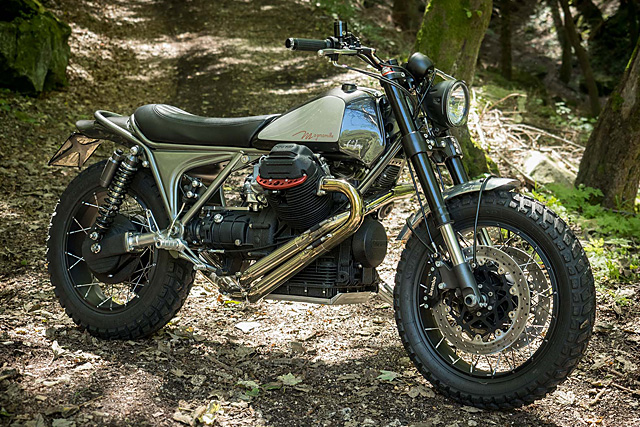 The instrument cluster is replete with a tachometer, speedometer and all the other necessary data a volcano climber could ever need. Again, it’s a lightweight unit which, together with the headlight and it’s other LED cohorts complete the electricals. Finally, the beautifully executed exhaust is a bespoke design made by Mass Moto from Filippo’s own drawings. A two-into-two design with silencers hidden inside the collectors, it’s obviously the crowning achievement of the bike’s already very impressive looks.

Looking for an impressive way to shuffle of this mortal coil? We can’t think of any better exit strategy than riding Filippo’s Guzzi up an erupting Vesuvius and into the mouth of the angry beast. Sure beats going in your sleep during your afternoon nap. Besides, ending it all like that would probably mean a ticket for you and the Guzzi straight into the house of the Gods. Just make sure Zeus doesn’t hog the bike. Bad Zeus. 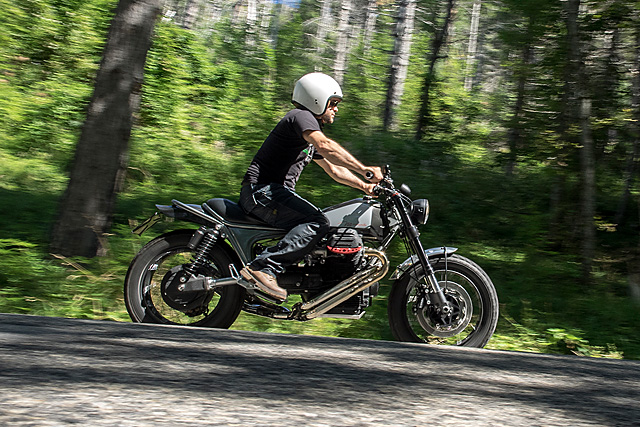 The lava flow is just out of frame