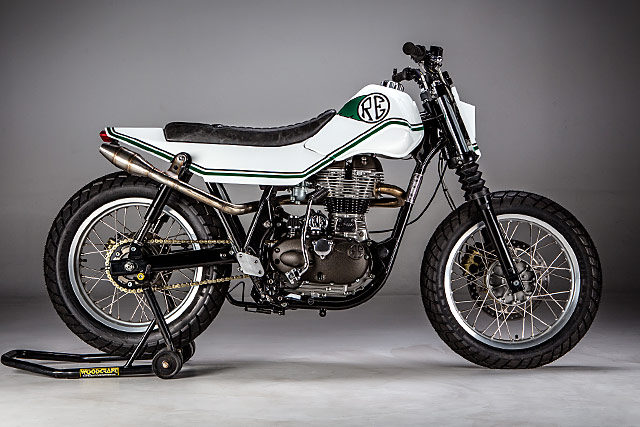 The creator one of the most iconic cars of the Twentieth Century once said “a camel is a horse designed by committee.” Sir Alec Issigonis, the man who designed the Mini Cooper, just might have had a point. But while the saying would have me pretty pissed if I was a camel, I’d be even more angry if I was part of a committee that actually had a clue. A committee made up of, say, motorcycling enthusiasts. Because that’s exactly where this particular bike was designed. And then it was built by Sean from Virginia’s MotoRelic. 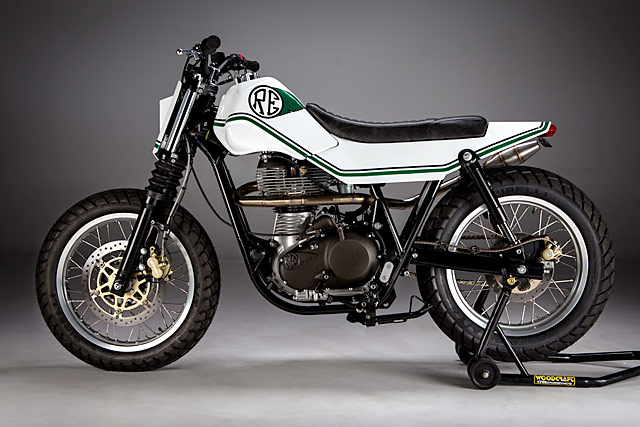 “As with all custom builds,” says Sean “you want to take the donor bike apart, down to the frame and engine. Then you can see the lines you have to work with. For this build, we used a British Harris Performance frame, which is well-built and very easy to work with.” 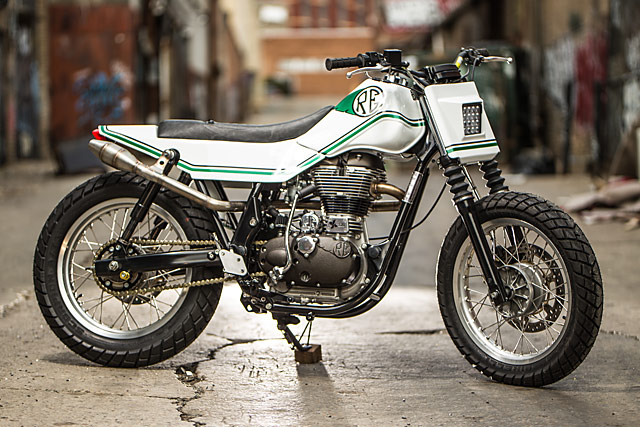 Sean started by fabricating the tracker-style headlight and number plate. Once completed, he stuffed a ridiculously bright Hella running light right smack dab in the middle of it, finishing off the front very nicely indeed. “I chose to use a Yamaha XT225 gas tank; it had the MX look I wanted and it’s made of steel, so it could be easily modified.” To get the tank to fit required some frame modification, especially where the tank rubber mounts attach.

“I really wanted to use an MX-style gas cap, but they require a very special thread size. I asked my friend Ryan Dzurilla, who happens to be a great machinist, if he could make one from stainless. He did and it worked perfectly. Once the tank was where I needed it, I moved on to the all aluminum tail section. Getting the right shape for this was fun; I really wanted to bring the angular design of the tank all the way through the bike.” 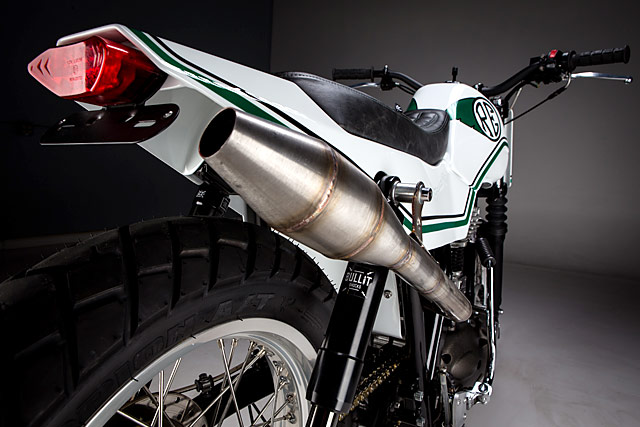 Next up was the seat. Sean shaped up some aluminum sheet for the pan and glued down the foam. Shaping re-bonded foam is a messy job, but Sean says that it’s exciting to see the shape of the seat transform to what you see in your head. “Once I was happy with the shaped, I shipped it off to Wes at Counterbalance Cycles in Rhode Island. He did an amazing job with the distressed leather for the seat. We decided on a block sewing pattern, which later proved to work very well with the Oury grips.” 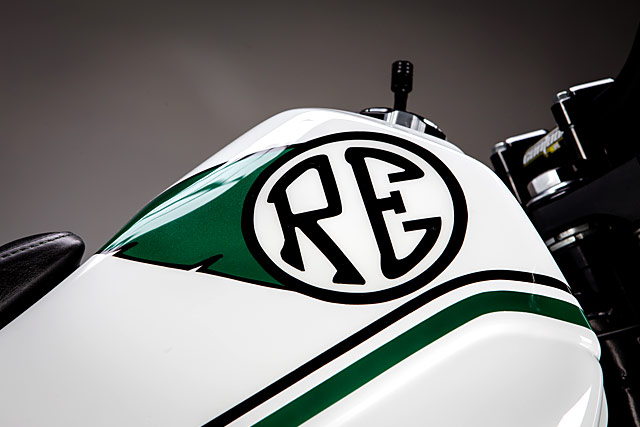 Once all of the Enfield’s body work was shaped and Sean was happy with it, he handed it off to the very capable Craig Rutler at Homeward Bound Motorcycles for the beautiful white paint job you see here. “We couldn’t just paint the whole bike white, so I thought it would be cool to bring a little English racing heritage back to the build by adding some British Racing Green to the scheme,” says Sean. 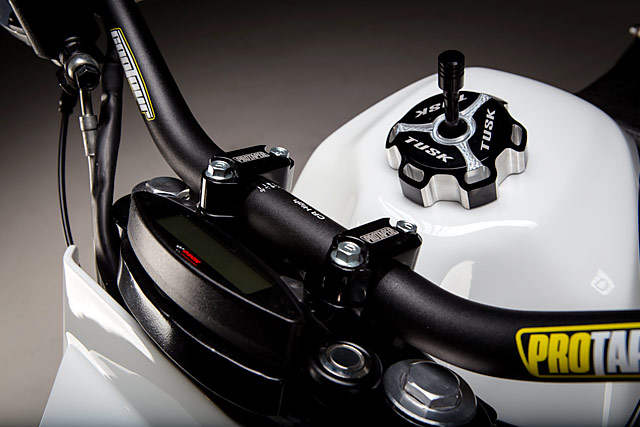 “Since the body work was off being completed, I shifted my focus to the rest of the build. The tires I chose are the Pirelli MT90. They’re just aggressive enough to give it a great dirt tracker look, but they still ride and handle well on the street. The wheels and brakes are stock and both perform well and really look the part.”

“Protaper handlebars were a must,” says Sean. They were deemed to have the perfect ‘low and strong’ look needed for this build. It was necessary to modify and drill out the upper triple to accept them, but according to Sean, it was totally worth it. 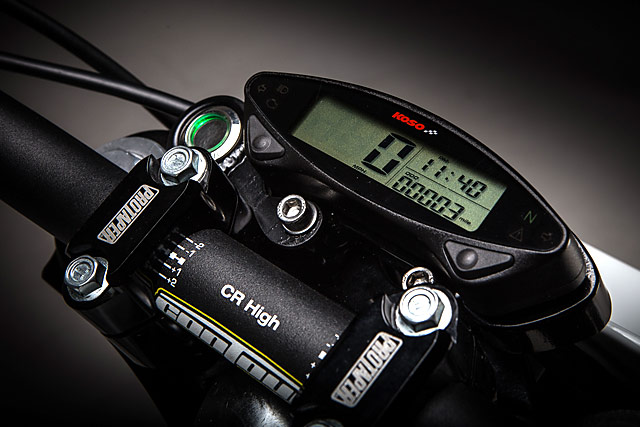 Sean needed the bike to sit a touch lower, so with the help of K-tech Suspension he got the stance he was looking for. He then lowered the front 2 inches with K-tech internals and added the sweet-looking K-tech Bullit shocks out back. With a tracker style build, you just can’t have rear-set foot pegs. It’s the law in some countries. So Sean made up some adapter plates to move the foot pegs into a more mid-style, dirt bike position.

Having the bike looking like a proper tracker, it was time for one final disassembly. The bike was taken apart right down to the frame, which is then fully welded and smoothed where those pesky unused tabs and brackets once were. Then it’s off to the powder coater and in this instance, that was taken care of by Daniel Brooks at Appalachian Paint and Powder. 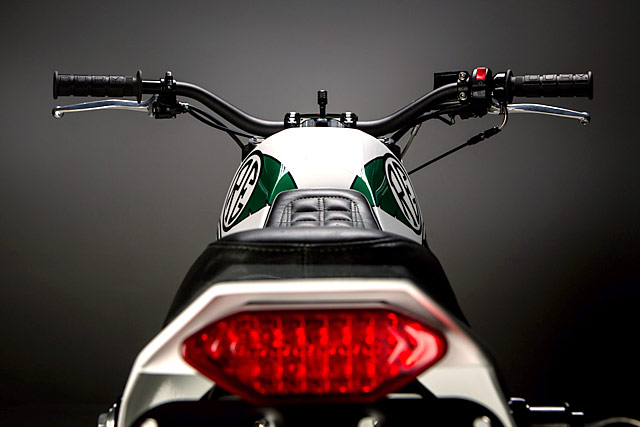 “Now that I had it all back and looking sexy, I got to work with my favourite part – the final assembly. Every nut and bolt is cleaned, polished or replaced with new. The tracker’s engine was given a splash of a dark bronze wrinkle coat on the side cases and covers. Then it was slipped into the freshly coated frame.” 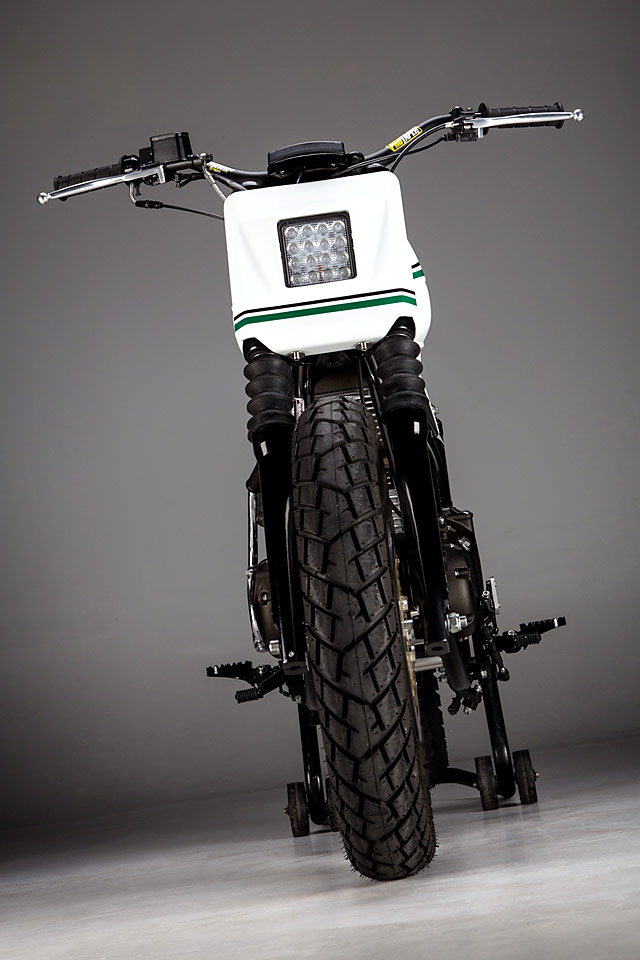 Sean decided to use an Amal carb conversion on this build due to the fact that he would be building a custom exhaust and using a foam air filter – none of which the Royal Enfield’s EFI set-up would like. Swaps like this have the potential to waste weeks of time, but with the help of Hitchcock Cycles’ carb kit it all when on great. Once the bike was fully reassembled and with the body work now in place, Sean got to work on the full stainless exhaust. All of the stainless pieces were from Cone Engineering, as he wanted to build the entire system from scratch and conveniently they offered all the parts to do just that. “I couldn’t wait to hear it,” he grins. 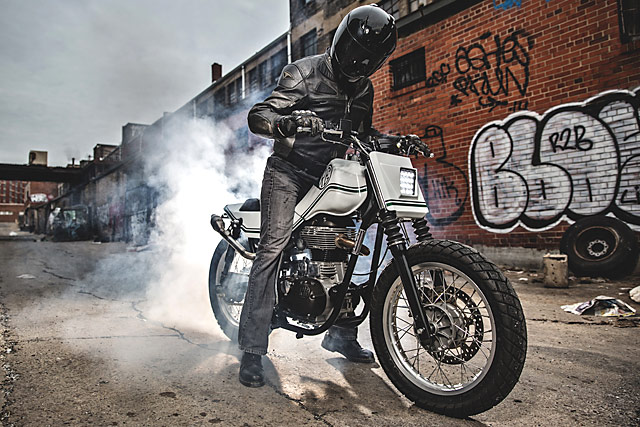 “I finally got the system all welded up and installed. I cranked the 535cc engine over and it barked like a good little tracker should,” he says. “I was please with how it snaked through the frame and how it sounded; quiet at idle and like an absolute beast revved up. The first test ride was great. The carb performed flawlessly and the bike handled very well. The exhaust note makes you want to turn off the pavement and get dirty! I am very excited to have been asked to build this for Royal Enfield & Cafe Racer XXX and really I hope all your Pipeburn readers enjoy it.”