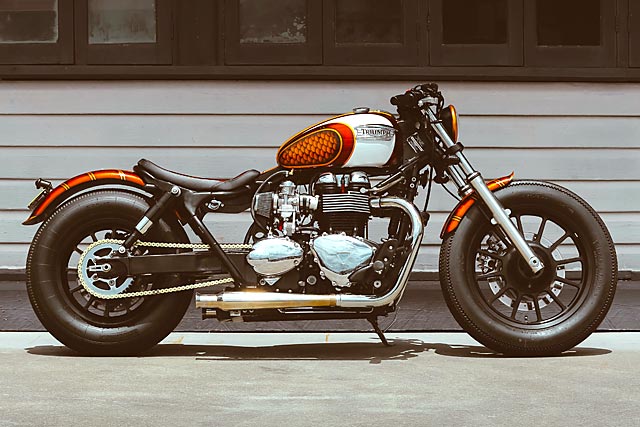 Some say that his ear wax tastes like Turkish Delight and that if he could be bothered, he could crack the Da Vinci Code in 43 seconds… all we know is, he’s called Wenley. In the space of a week the maestro formerly of Mean Machines, Wenley Andrews, has come out swinging with two incredible Triumphs for the world to enjoy. But always one to set a challenge for himself, he didn’t pick a couple of T100 Bonnies and churn out cafe racers. Instead he first laid down the law with a thunderous triple, a barnstorming bruiser based on a Rocket III. Now to finish off the one-two combo, he’s flooring the competition with another unlikely custom candidate. It’s a brilliant old-school styled bobber based on a 2010 Triumph America. He calls it the ‘Dirty Rascal.’ For years people have been getting in Wenley’s ear and trying to convince him to build an old-school bobber based on a Bonneville. But it’s never been something that really got him going, “but I came upon a Triumph America one day while purchasing a Bonneville, I immediately removed the tank and fenders with my imagination and saw a beautiful bobber/brat style bike, a price was negotiated and I rode off with a Triumph America, Happy days!” enthuses Wenley. 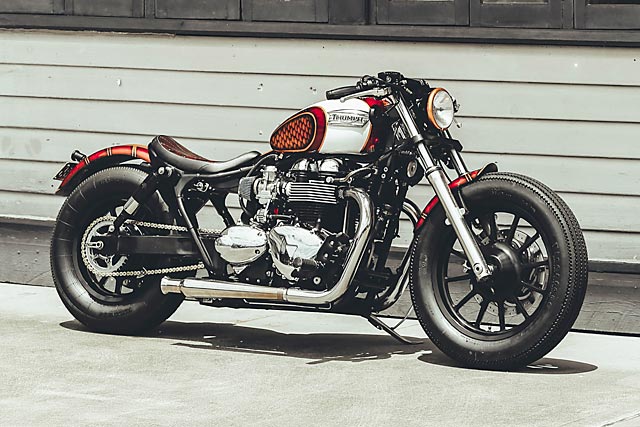 The America however presents a unique challenge; she’s a big girl who’s spent more than her fair share of time in the McDonald’s drive thru. When finally convinced to get on the scales fully loaded the 2010 model swings the needle to 250kg or 550lbs in the old money. So first task for Wenley was to start stripping the bike and attacking its guts, removing the airbox, big battery and all the other assorted clutter. With the America stripped down the real fun of building it back up could begin and she was hoisted onto the lift. 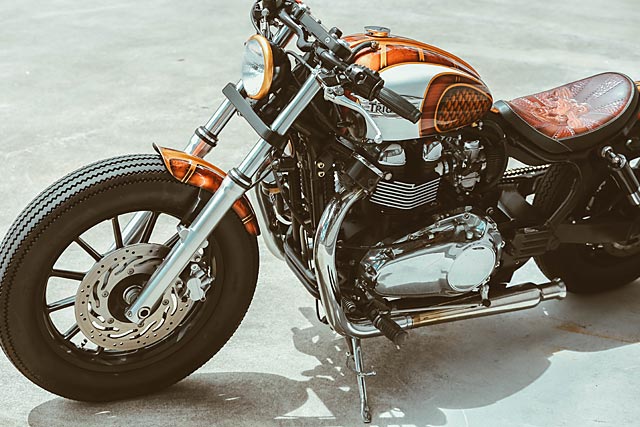 The first port of call was to start envisioning how to turn this modern cruiser into an old school bobber. “What better way to make a motorcycle look old school than a wicked set of retro tyres, I really wanted your eyes to be on the tyre rather than the rims,” explains Wenley. To further accentuate that look he took the stock wheels and painted them a satin black. This gives the illusion of the tyre/wheel combination merging as one and gives a nice tall look. This change meant the enormous standard fenders would no longer fit, not a worry as there was no intention of ever keeping them anyway. 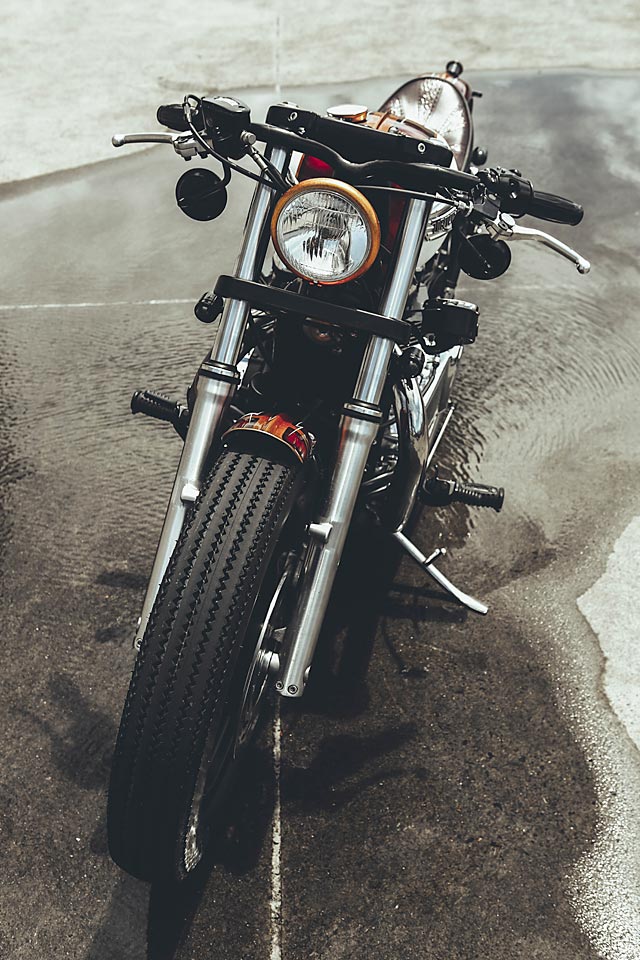 …and it can walk on water

Instead customised ribbed fenders take their place, but it’s not as simple as just bolting them on. “The front was reversed as it looked kinda weird and cool at the same time, I laser cut some brackets and lots of fiddling round. Measure ten times, cut once!” Pay attention to Professor Andrews, folks. The rear item posed some extra challenges as it would normally be bolted to a set of large chrome struts. With these nestling in the nearest bin the fabrication work began with a new hoop and supports tacked to the frame with an absolutely seamless transition. 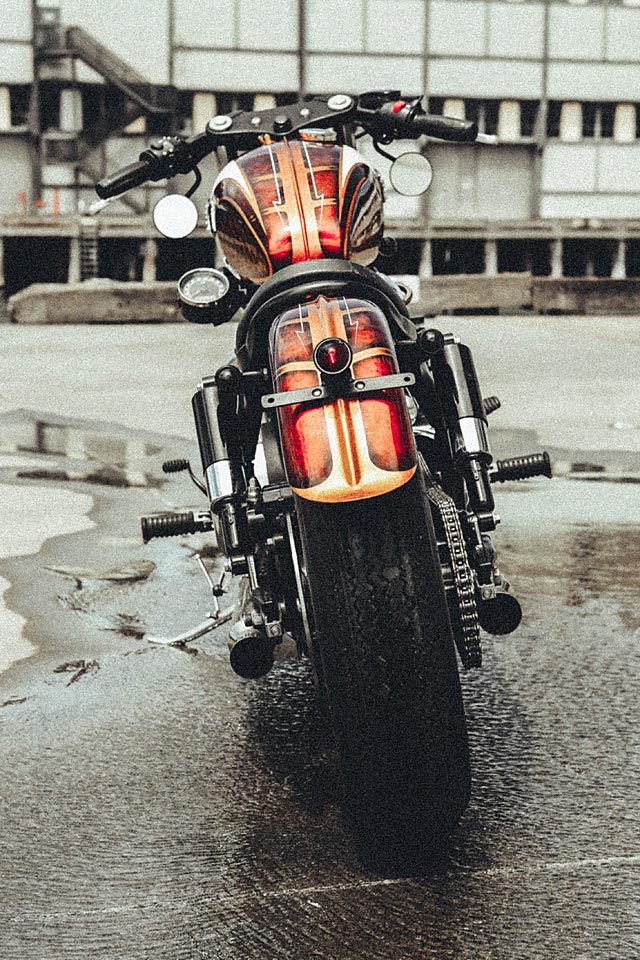 For this Wenley is quick to give credit to fabricator extraordinaire Billy Kuyken “thanks to my friend Billy who has magical welding hands, we welded and fab’d up the rear of the frame and fitted up the rear ribbed fender.” The obvious next step was to work on the seat as it provides the crucial transition point from front to back, as well as being the place you rest your bum. A seat base was fabricated before being turned over to Andrew from Beyond Trim to once again work his magic for Wenley. 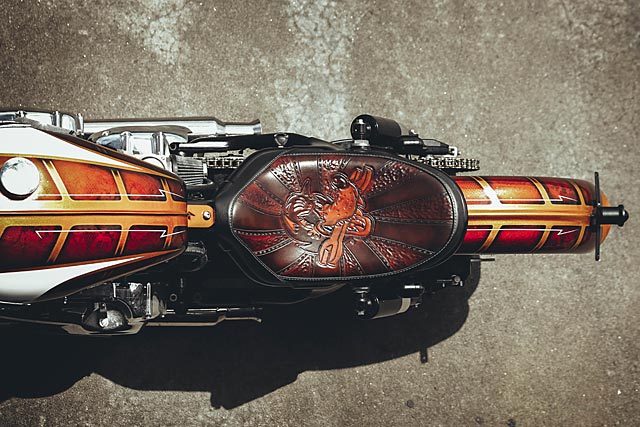 “In my mind I was thinking ‘Wenley keep this simple,’ but the Devil won this one”

The result is incredible, the creation of a true artist who is a master of leather tooling and stitching together some of the best custom seats on the planet. With the seat out at the Beyond Trim shop, attention turned to what to do about a tank. “The original plan was to pop on a 2010 Triumph Bonneville tank as it has the fuel pump built-in, most likely an easy fit but on the other hand I also had an old Triumph T120 tank lying around. In my mind I was thinking ‘Wenley keep this simple,’ but the Devil won on this one,” laughs Andrews. 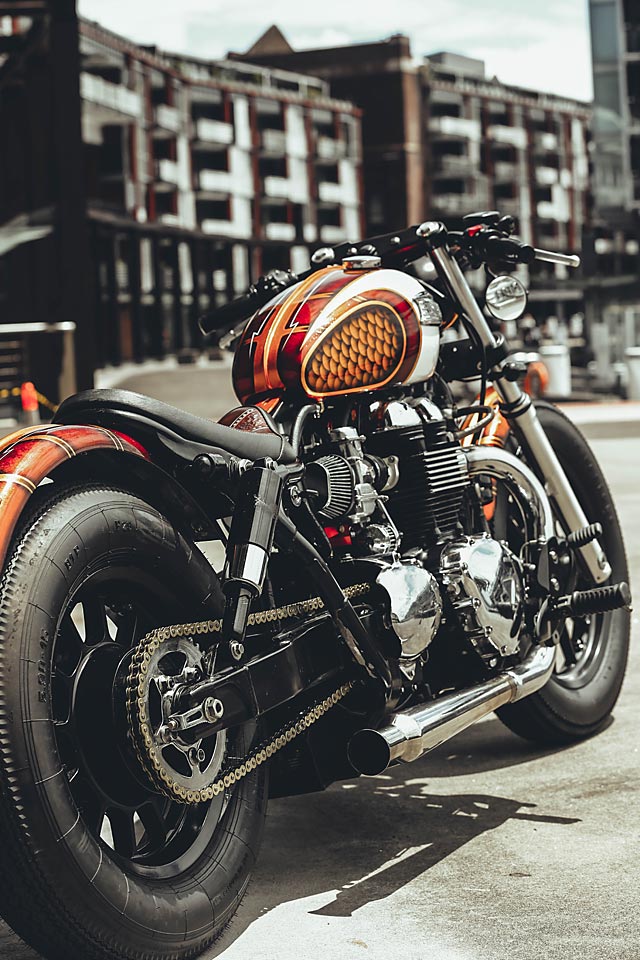 With a smile from ear to ear with the old tank up on the frame it was time to make it work with the fuel injected engine. The solution was quite simple; an external fuel pump system would have to be run. But not so fast, as the small tank left nowhere to hide it, so a week of brainstorming and trial fabrication was required to come up with the desired result. With the bulk of the fabrication complete the tins were sent out to painter Jack Johnson to sling his spray guns like six shooters. Wenley describes the paint as “crazy ass” and he’s not wrong. The mix of copper flakes and fish scales over white look incredible. 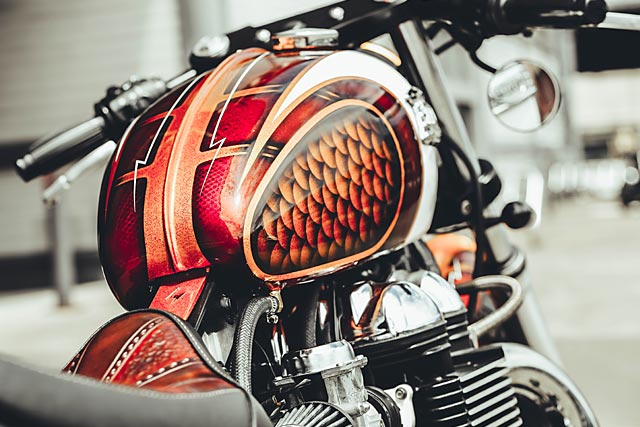 To help the paint work pop even more Andrews had two tricks up his sleeve for many of the other pieces. “Most of the parts were painted satin black or sent to chrome, yes I even chromed the little air intake clamps and sprocket.” The 865cc engine gets plenty of chrome of its own with the valve and side covers all a mirror finish. A set of pod filters take over from the scrapped airbox and the soundtrack gets a true old-school bobber vibe with a pair of cocktail shaker mufflers spitting the big twins tune. 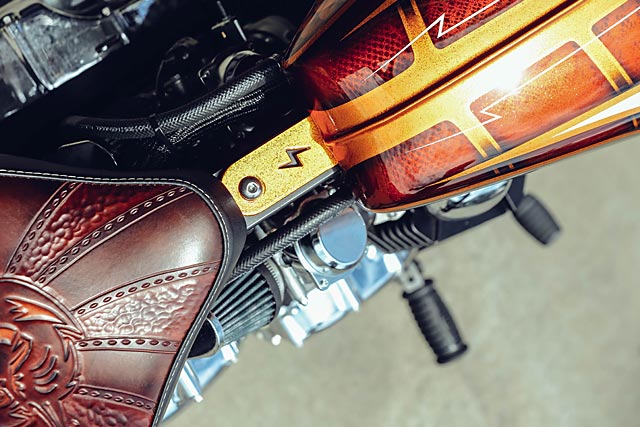 Lightning where your crotch goes

To keep things clean and simple the headlight was replaced with a 5 1/2 inch Bates item and a vintage look tail light at the rear. The speedo has been side mounted while a set of new bars was bent up in-house and provide the low look leaving nothing above the top triple clamp. “I re-wired the whole bike as space was a huge problem, there was nowhere to hide many things as the tank was so tiny and the limited space was taken up with the fuel pump,” explains Wenley. Who also did a remarkable job hiding the little anti-gravity battery out of sight, in a custom box under the swingarm. 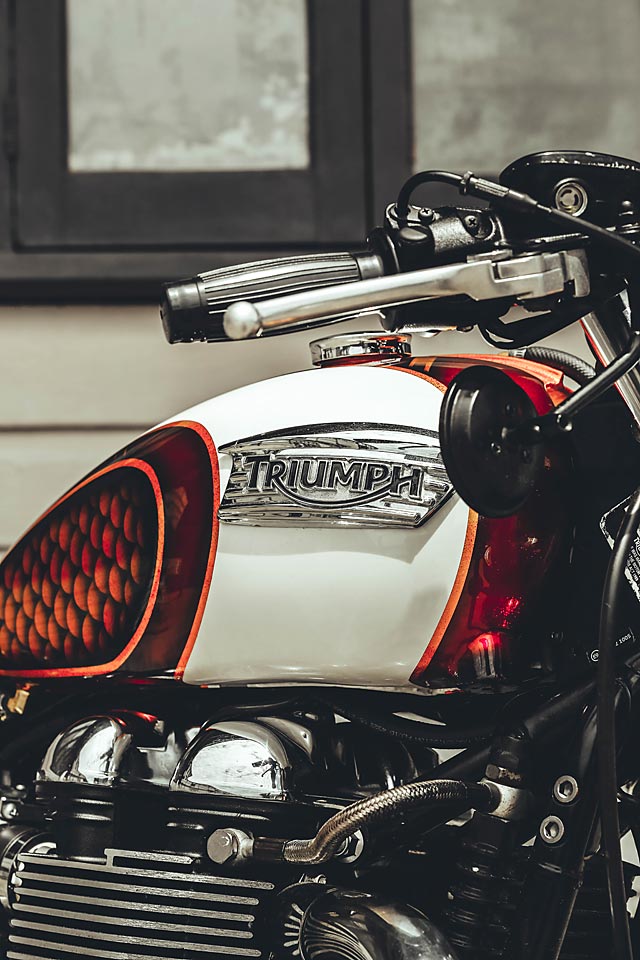 With Dirty Rascal finished Wenley is quick to pay tribute to those around him, “Thanks to my lifelong friends, fabricator Billy Kuyken and painter Jack Johnson—couldn’t have done it without you crazy bunch.” But with another amazing build behind him Andrews has shown the world in the space of a week what can be done with two previously unlikely candidates. If you’re selling a Triumph Rocket III or America now might be the time to bump up the price, the buyers will have to blame Wenley. 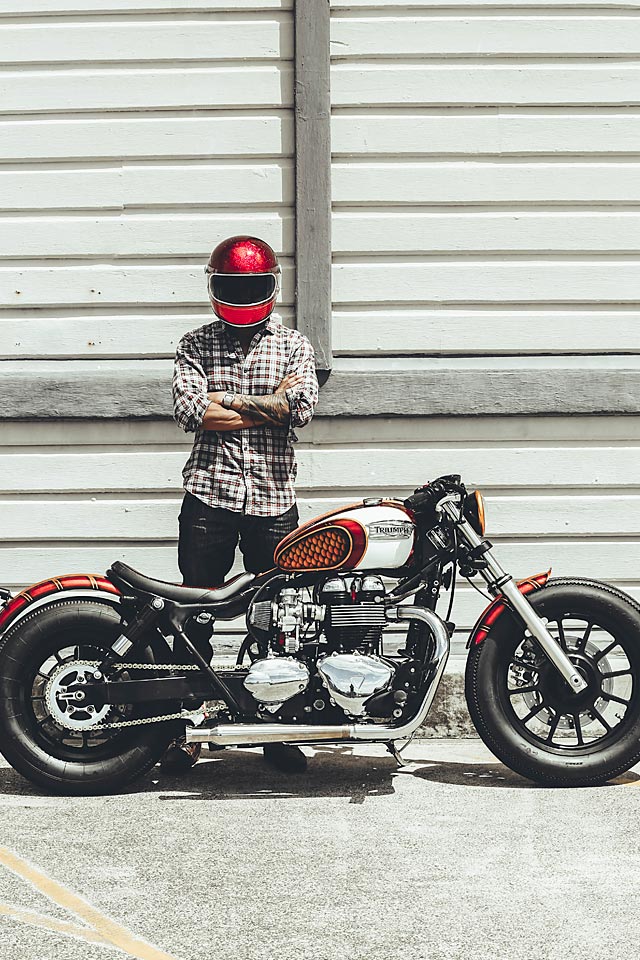 We call him “The Aussie Stig”