Peanut butter and jelly. Moustaches and cops. Nine Inch Nails and Johnny Cash. When it comes to weird combinations that somehow manage to kick arse, it seems the world has a never-ending supply. Avocado and Vegemite on toast, anyone? No, seriously. It’s amazing. But it’s not often you see the same sort of unexpected genius happening in the world of custom motorcycles. Hell, we can’t think of a new bike genre since Go Takamine invented Brat style. That is until now. So here is Perth’s James Alkins and his revelatory cafe scrambler cross pollination. Genius? Madness? We’ve made up our minds, now you be the judge. 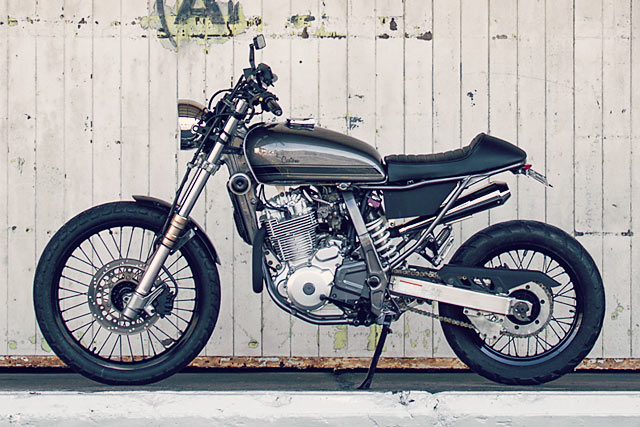 And if redefining motorcycling genres wasn’t Herculean enough, this James madman also took on the whole damned task himself. “I build the bike from home and completely from scratch. I took on pretty much all aspects of the build, from the fabrication to the painting and engine rebuilding.” And the time he set aside to make this all happen? 12 months? 6 months, perhaps? “I spent 6 weeks on the build after work and over the weekends,” says what is clearly Australia’s hardest working customiser. 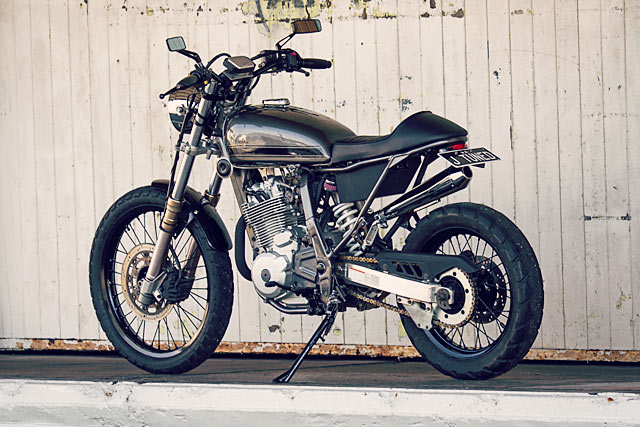 The build was based on a rather tasty ‘07 Suzuki DR650 thumper. “Almost everything outside of the frame has been changed,” says James. “From the custom seat, handmade tank, tail lights, headlight, bars, levers, grips, mirrors, indicators, and fenders.”

The not altogether bad original dash has been upgraded by James to an Acewell digital dash, complete with pilot lights, a handy tacho and quite a few other handy little functions. Don’t you just love modern technology? “The wiring has been simplified, shortened and tucked into a custom-built electrics box under the seat, which also houses the battery and the remote alarm system, complete with a knock sensor and keyless start.” 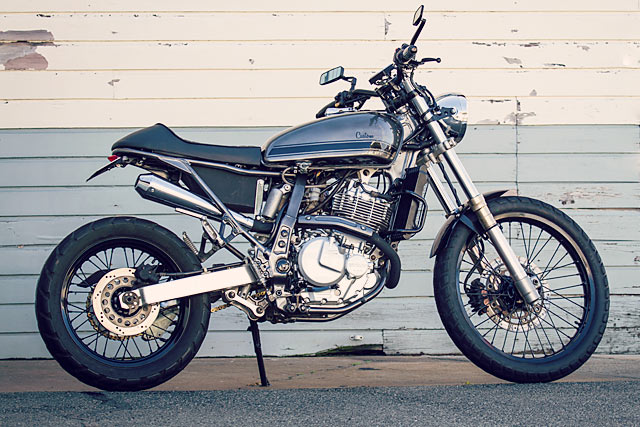 Rolling his sleeves up, Mr. Alkins then turned his attention to proverbial donk. “It was fully rebuilt, repainted and lightly worked, which by all reports has really ‘uncorked’ the power from the 650cc single cylinder motor.” The sexy power party was topped off with a stage 3 jet kit, a high flow intake and a straight-through retro muffler. “The sound and responsiveness of the motor is spectacular,” says James.

Undoubtedly helping all this was the fact that he was able to reduce the wet weight of the bike to a Russian ballerina-ish 135 kg (or 297 lbs), which drastically improved the power to weight ratio and the bike’s handling. In stock guise, the bike puts out just under fifty horses, so imagine how it’d feel adding ten more and dropping the overall weight by 20%? Giddy up! 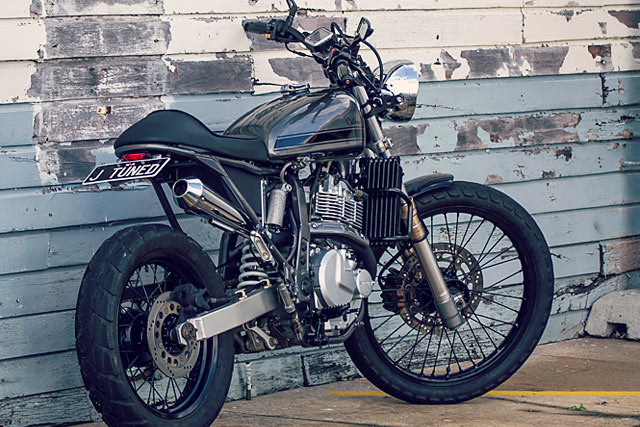 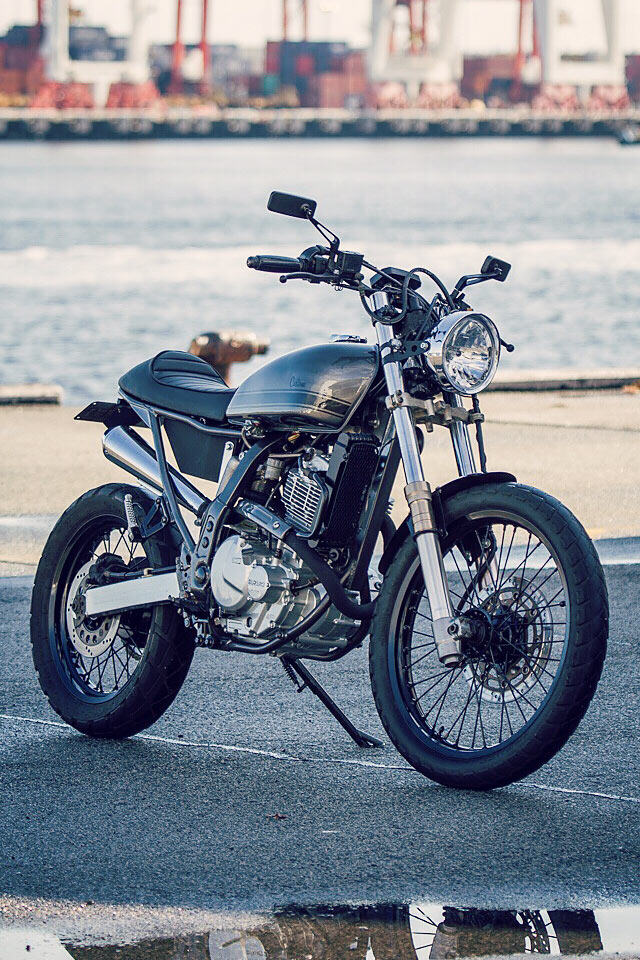 They say that necessity is the mother of invention, and while I’m a little ashamed I actually used a line like that in this story, it’s a cliché that rings true for James. “My wife and I recently purchased some land here in Western Australia. So with a little practicality in mind, I was inspired to build a kind of “dual sport cafe” that could handle the unsealed country roads in the area while still maintaining the look and appeal of a hand-crafted racer.” Initially, James says he gathered a whole heap of inspiration from raw scramblers, but as the build progressed, so did his desire for something with a little ‘caffeine’ in its veins. 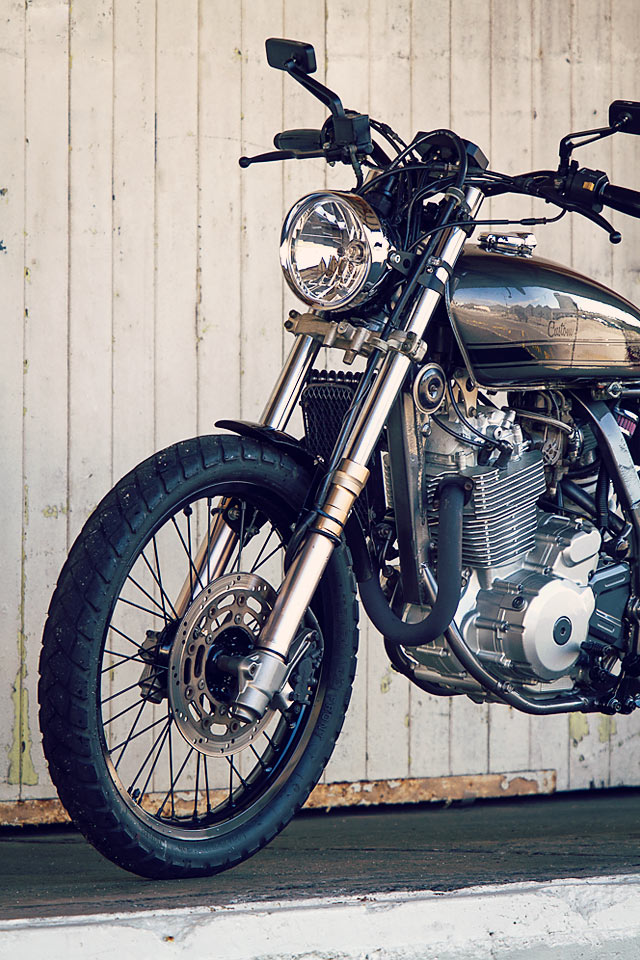 Knowing that he wanted an electric start for everyday use and a monoshock rear, James aimed his initial search at a wide range of modern off-road bikes. “Then I found this ‘07 Suzuki DR650se locally and went to see it straight away. It was worn out and thoroughly geared up for long distance touring; there was the long-range tank, the bag and carrier on the back. All the fruit was there, it just wasn’t the type of fruit I wanted.” He knew, however, that the sale of these unwanted parts would help fund the build, so he dropped the cash and took the leap. 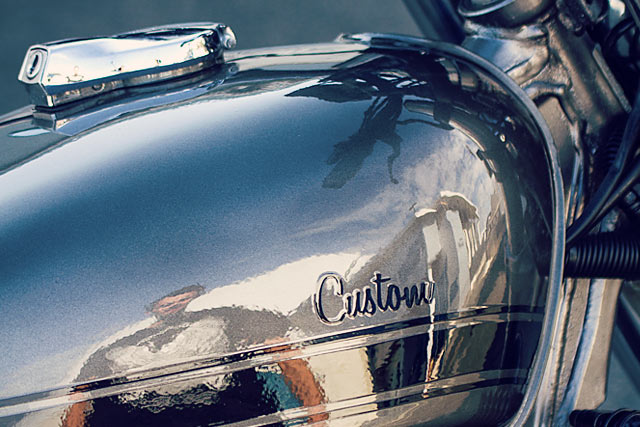 If only we knew what type of bike it was…

“Much to my surprise, the hardest part of the entire build was the tank. Choosing the exact shape to compliment the bike I was seeing in my head, sourcing the tank, mounting the tank so the body lines flowed without interruption, modifying the tank to fit the frame, sanding the tank, painting the tank, the detailing…” So even with everything else the full build involved, the tank consumed a full one-third of the overall construction time. “But it was totally worth it,” says James. 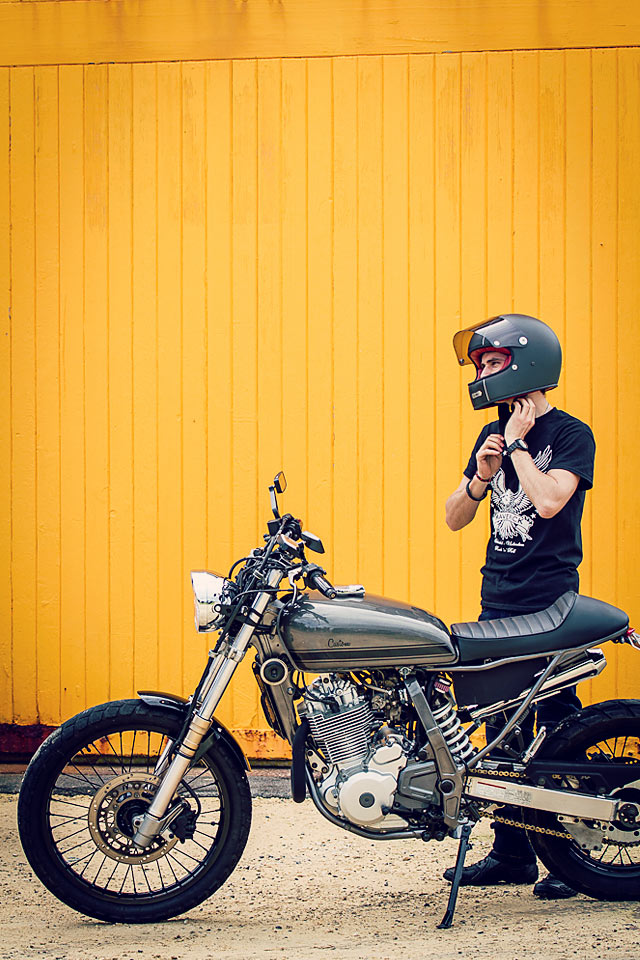 When asked, the thing James says he likes most about the finished bike is the fact that he built it entirely with his own hands. “I know some people may not appreciate the fact that this cafe racer has adventure bike origins, but I feel the finished bike is a true reflection of myself. The uniqueness of the whole ‘cafe racer meets scrambler’ idea is what really drove me to take on the challenge… and to get it finished, too.” 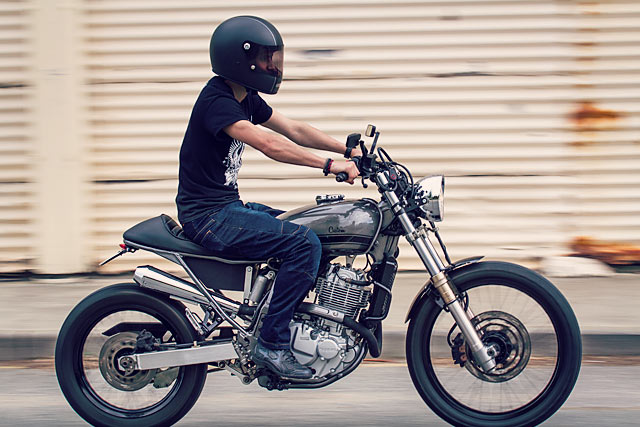