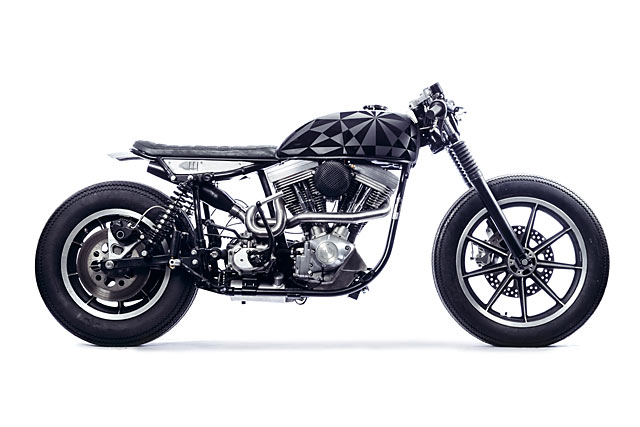 When someone says Young Guns and the 1980s in the same sentence, my mind instantly races back to the shoot ’em up Hollywood Western film that I must have watched fifty times as a kid. Owning a copy on VHS will do that; heck it’s been a hell of a long time and the movie starred a young Charlie Sheen. But these days Young Guns Speed Shop have given the name a great deal more credibility, crafting beautiful custom bikes in their homeland of Switzerland. The team of Nik, Fabian, Ale and Zesi must have had an extra spring in their step when a lovely young lady brought her machine in for a makeover. The result of their handy work is this badass ‘82 Harley Davidson Cafe Racer known as Odessa. 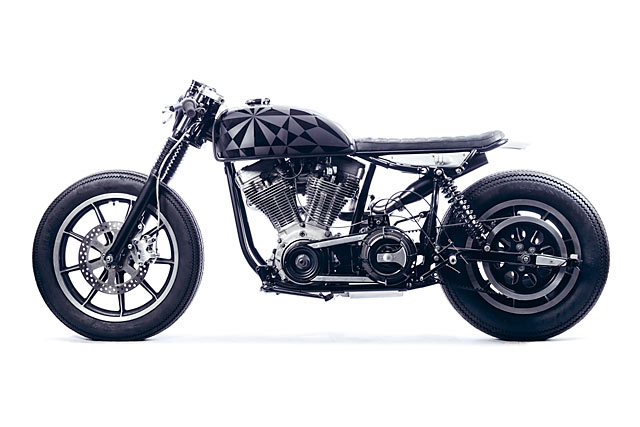 Unfortunately, it wasn’t all roses and sunshine as they might have hoped. The donor bike had been bought from eBay and had definitely seen better days. When the Harley arrived at the YGSS, Nik described its state. “It turned out to be pretty fucked up,” he cringers. It had also had what appeared to be the world’s largest bucket of white paint dumped over it. So the build turned out to be as much about customisation as it was restoration for this 30-something HD. But first, it was all about just getting it working. 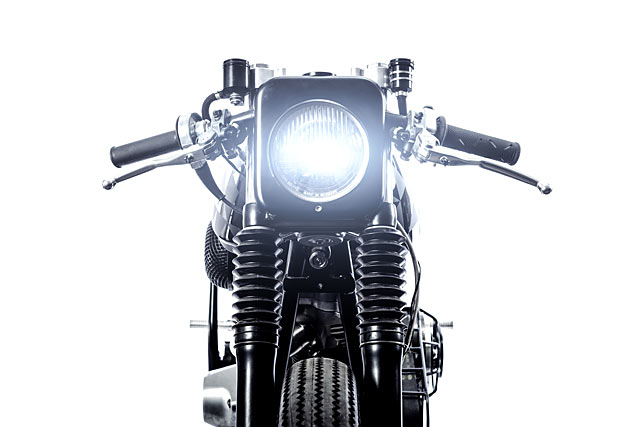 The first step was to strip the ’82 FXSB down to its bare bones and start to lay out a roller that had the look and stance of a cafe racer. Sitting numerous tanks on the frame they soon realised they weren’t getting the look they were after. As Nik explains, “The rocker covers are higher than the frame, so sitting something on it becomes very difficult –  never mind getting a proper, clean cafe racer line.” So to solve the problem they thought outside the box and grabbed a Honda CB500 gas tank and mounted it. The Japanese tank gives the Yank bike a very classic, British feel and as it turns out, it was exactly the look their customer was after. 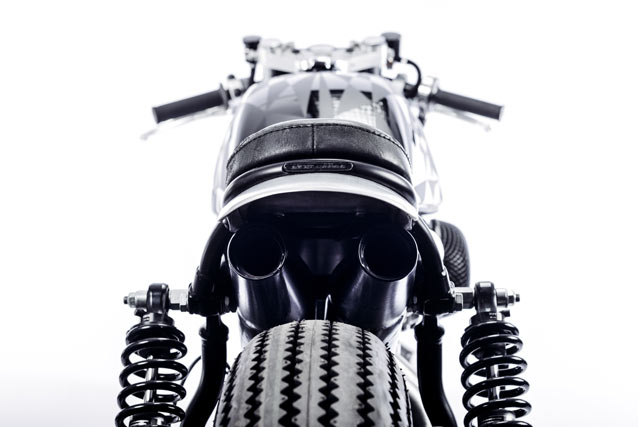 With the lines of the tank sorted, the subframe was cut off and a new item was fabricated that runs perfectly level to the underside of the tank. Rarely has any Harley been given such clean lines without enormous amounts of ugly body work to hide the frame. Talk about ‘less is more.’ Continuing on with the theme, there is no front fender and the rear is a short steel item that’s just enough to keep a girl dry. The shortened subframe features a kicked up hoop style rear end and with the shock mounts sorted, the entire frame was given a new coat of HD black paint. Sitting up on the new subframe is a classically styled seat that has a little extra something thanks to the hand stitching by local Saddle maker Yves Knobel Sattlerei. Although the classy seat was exactly what they were after, it did leave a gap between the frame rails. To fill the space the boys hand formed alloy covers with neat louvers that provide the fit and finish of a high end vintage sports car. But for the paint work they went in a slightly different direction. From ’30s class to modern day Hipster art, the tank’s geometric graphics were laid down by The Color Factory. Impressive, huh? 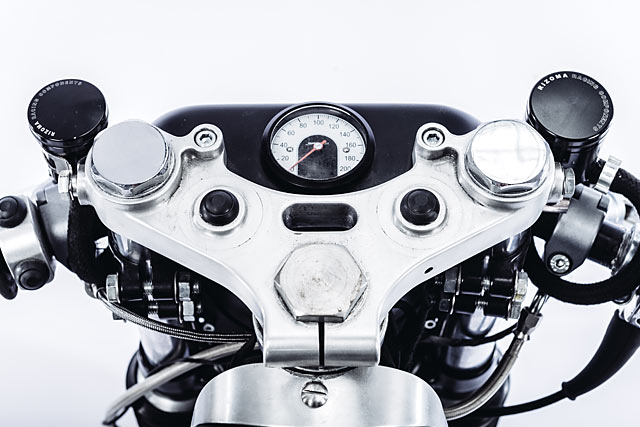 But as unusual as the paint is, any time a bike is packing 1337cc of Milwaukee V-Twin muscle, it’s hard to draw your eyes to anywhere else. Given the sheer torque the engine makes, and now in a much lighter package, YGSS didn’t feel the need to extract any more power but to instead add to the engine’s personality. Those louvers under the seat instantly became functional with the brilliant handmade exhaust venting out under the seat thanks to two small black mufflers. The Keihin carb was then jetted to match and a neat air cleaner replaced the horrific ’80s monstrosity some designer once thought looked the part. 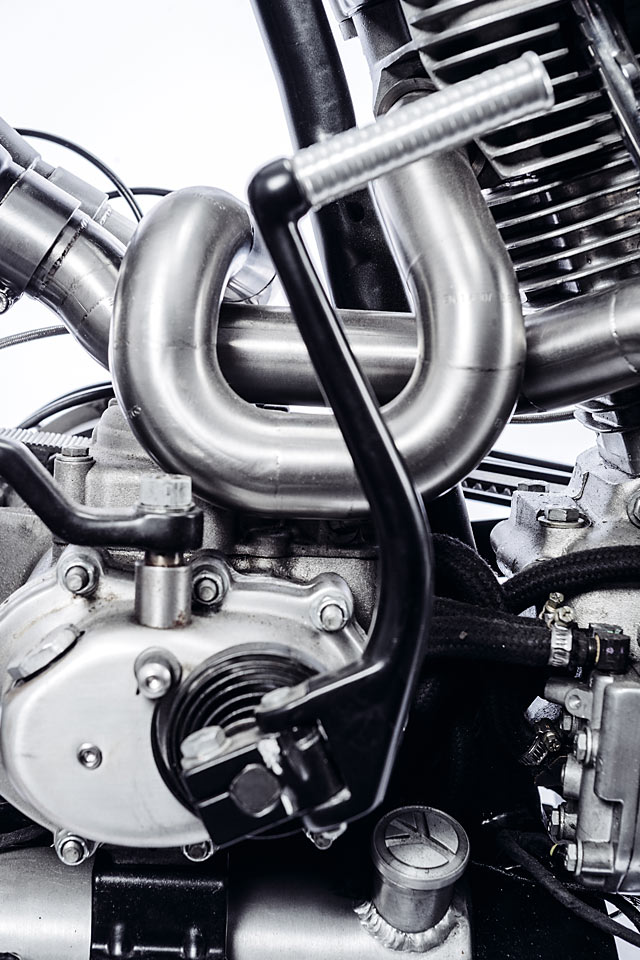 But adding even more character to the engine is the foot munching open primary that links the kickstart cog swapper to the howling V-Twin. Once again showing their talents with steel, the boys crafted a neat cover that does just enough to protect the rider from the big gears while still giving that brutal, open primary appearance. And just because they could they then upped the ante once again fitting the HD with a dry clutch arrangement should nearby motorists not already be frightened enough. 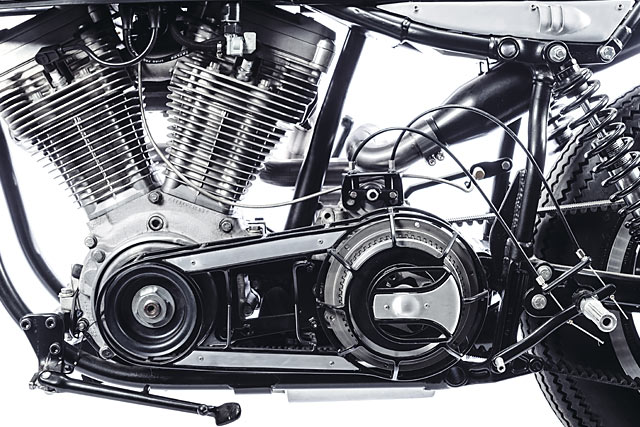 Having gone to so much effort to make the engine unique in both form and function, the standard oil tank would only be a distraction. So the welder was fired up and some more steel rolled to create a custom item that hides itself down by the lower frame rail. But never ones to waste a good part, the standard oil tank was cut up and has been brilliantly re-purposed as the headlight shroud. This holds in place the small and recessed replacement headlight for an ultra-clean look that is matched at the rear with a single LED strip.

The bike was coming on nicely, but after hopping on board Nik wanted a change to the laid back Harley riding style. “To give it a more sporty rider position we made rear sets and some new foot controls.” While up front, a set of clip-ons helps the rider get tucked in and Magura levers bring some extra style points to the party. The factory front brake is no more with a drilled disc now clamped by a gorgeous machined caliper from the world renowned factory of Performance Machine. And when it’s not on its new brakes, the FSXB is assisted out back by all new progressive rear shocks. 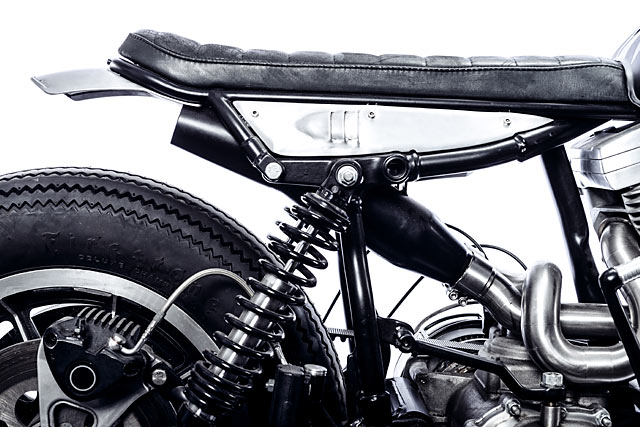 The finishing touches to the bike were all about keeping the looks planted firmly in the classic cafe racer era; Firestone rubber and an analogue Motogadget gauge. But where that would normally signal beer o’clock, the YGSS team had one final headache; meeting the tough Swiss registration rules. “It kills us to get the bike street legal,” bemoans Nik. But they got it over the line without any shots being fired in anger. Needless to say, a winning smile was plastered all over the young lady owner’s face as she powered off on Odessa. Now she was wielding a big, double barrelled Young Gun of her own. 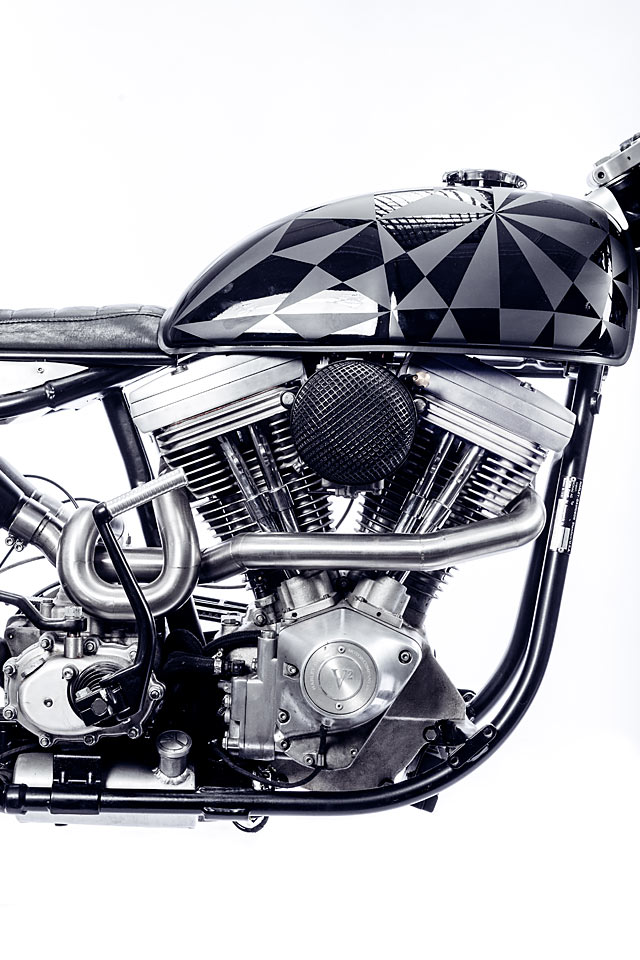