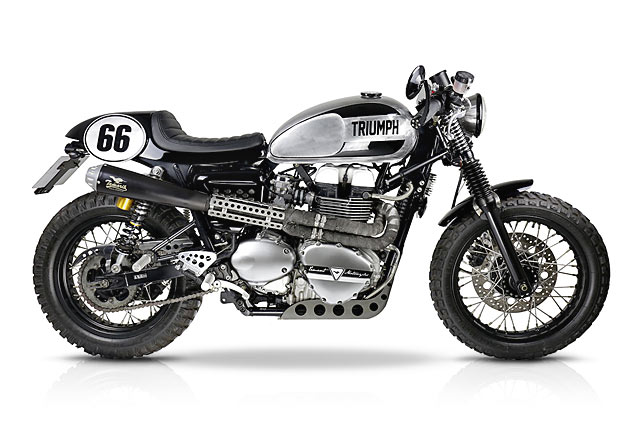 Figaro. You probably know of the word and its operatic connections, but have little or no idea where it’s from. But since you asked and since I’ve just spent 5 minutes on Wikipedia, let me enlighten you. Figaro is the lead character in Rossini’s ‘The Barber of Seville’. It’s the story of an old Spanish scissorman drawn into an romantic comedy of errors. Any good? Well, it’s been popular for 200 years, so it can’t be too bad – but it contains exactly zero motorcycles. Which is why this bike, made for Spanish Barber Rubén by Tamarit Motorcycles, is such a genius idea. Just think of how much better the old opera will be once we convince the Rossini family estate to include it in the official manuscript. Take a read of this while we draft the email. Matias from Tamarit was probably popping the cork on yet another celebratory bottle as he ran us through the details of his latest customisation efforts. ‘It’s a Triumph we call the ‘Black Moustache.’ It was done for a good friend of the house and a customer that is very special for us – ‘Rubén’. He is the partner and owner of one of Southern Spain’s most fashionable Barber Shops that also happens to be quite close to the Tamarit workshop.” 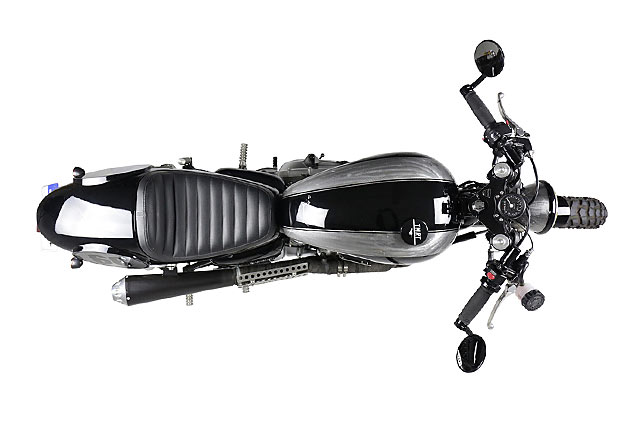 What you see if you mount the bike via parachute

It’s important to note that while Tamarit have only had their doors open four years, this build makes bike number 20 for them. “The truth is that we are very satisfied, because we have managed to make a success of doing what we love – building classic custom Triumphs.” 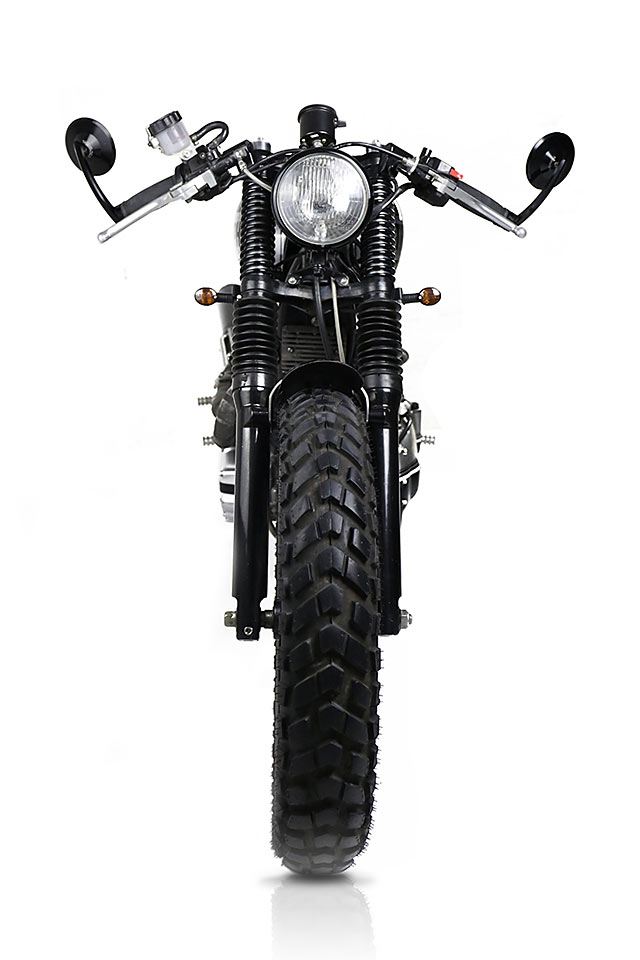 And now to the build itself. The “Black Moustache” is a based on a black, pre-injection  ‘04 Triumph Thruxton. As clients do, Rubén set Matias a challenge by requisitioning both cafe racer and scrambler features for his dream bike. Challenge accepted, we guess. Matias launched into proceedings by getting jiggy with the paint stripper and going to town on the tank, taking it back to the original steel colour.

Inspired by the grey he saw, a tri-colour paint scheme was hatched involving shades of metallic grey, black and white. Thusly, the engine covers were painted in aluminium and black, and the rocker covers in a gloss white. Chequered flag motif, anyone? 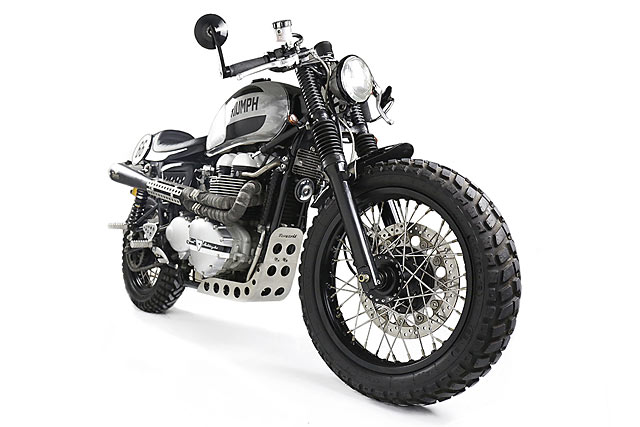 Then, along with a whole heap of minor mechanical miracles and a lavishing of after-market parts from their very own catalogue, Matias tended to the bike’s point end by replacing the original headlight with a ¾ Bates-style unit. And as for the ‘rubbers’, a Mitas E-07 was chosen for the push, and a Heidenau K60 for the steer, as apparently the Mitas doesn’t come in a 18″ option. For brothers from a different mother, they look like quiet the match, and were finished off with some matt black paint on their bushings and rims. 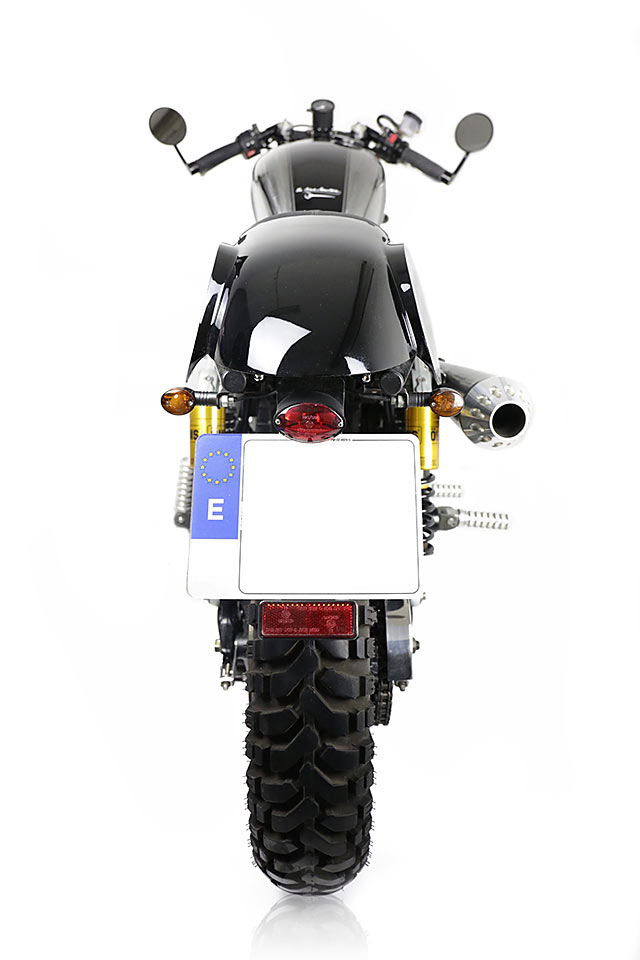 Those crazy Europeans with their blank plates

“We have also removed the stock fender from the rear wheel and in its place we have fitted a stainless steel fender, some perforated aluminum side covers and two new Ohlins rear shocks. Apart from the obvious ride improvements, our main goal here was to made the rear of the bike very clean and tidy.” Job done, old mate.

Furthering the battle against fuss, Matias replaced the mirrors with bar-end units, blacked out any remaining silver on the front forks and replace the large-ish factory dials with a svelte, single one. 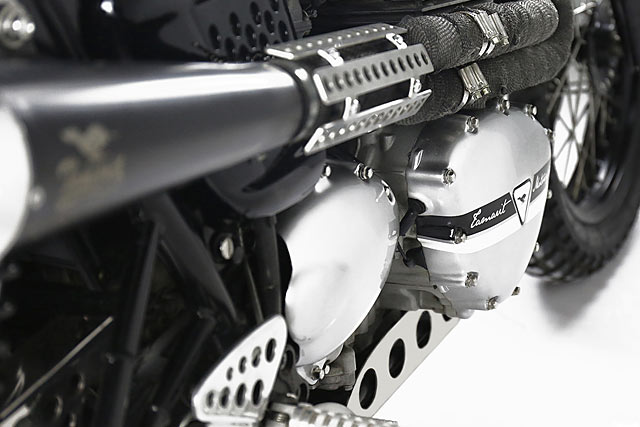 In addition, the front fender has been binned to make way for Tamarit’s own “little bastard” unit. And those not needing glasses will note that the bike now has a steering damper, too. Finally, Matias took advantage of the new exhausts ‘that go up,’ by adding a sump guard. That’ll deflect any stray shop scissors, then. 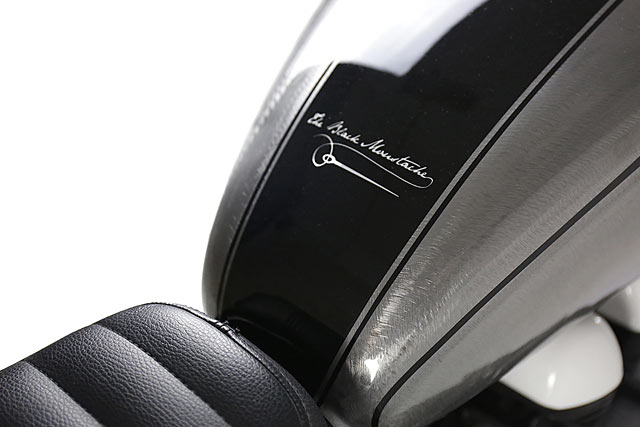 Apparent they sew with Moustaches in Spain…

“The hardest part has undoubtedly been the modification of the tail unit, which is unlike any other we’ve ever made. We had to insert two protruding ovals in stainless steel on the outside of the plastic moulding to get the rear number plates looking like they were meant to be there.” 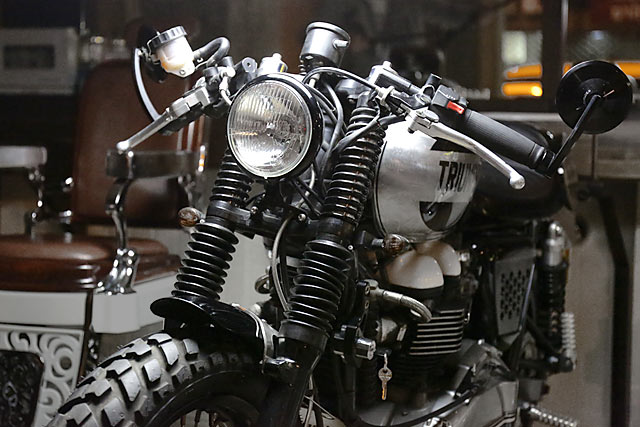 “In the end, we like pretty much everything on this bike. Its balance, its sobriety of line and restrained colours,” says Matias. “It’s hard to single out a real favourite piece, but maybe the front with the new headlight, black springs and the sump guard is one of the best angles.” And while we can’t disagree, we think we have discovered an even better combination. That of Hinckley twins and Matias himself. It seems that whenever they get together, things really seem to start singing. 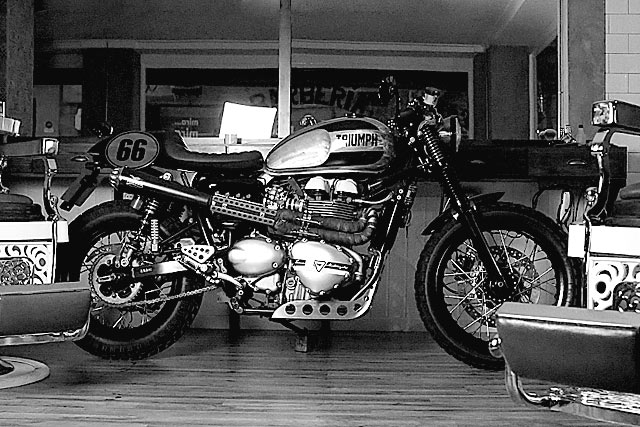 Just a little off the back (wheel), please