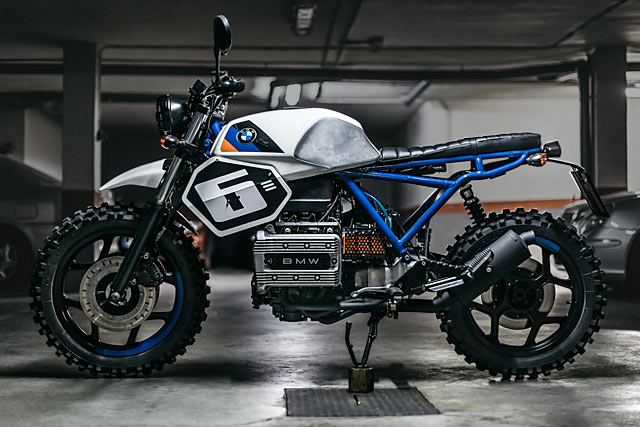 The journey through adult life we’re told is a relatively straight forward process. Work, breed, sleep – there’s even a rough guide to follow. Family and society steer many of us into careers we’re not really sure we want to follow, but before you know it the show’s over and the pension cheques start to arrive. But some restless souls are meant for more than one path and despite walking the same road for many decades, they decide it’s never too late to change. For Spain’s Carlos Ormazabal, a near lifetime’s career at camera giant Nikon would come to an end when a thirst for something new took hold. It’s been quenched by the opening of his own custom bike shop called The Foundry MC. And with just his second drink, he’s ready to serve a barnstorming 1991 BMW K75 street tracker inspired by one of the industry’s best. 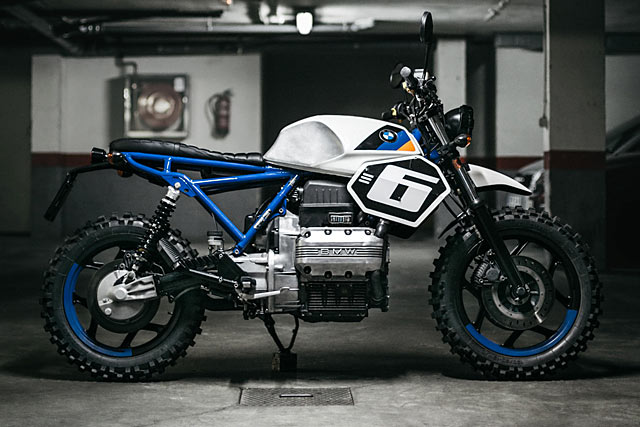 The motorcycle bug had been with Carlos since he was just 16 but it wasn’t until just a few years ago that the 55-year-old finally got the chance to build a bike of his own. A Regal Raptor with hints of Shinya Kimura and Carlos had a drastic realisation, “During that build, I realised that was what I really wanted to do for the rest of my life. But I didn’t have enough skills”. So he enrolled himself in a TIG welding course and spent his time honing his craft until just the right day would come. When it did the shop was opened near Madrid, a new career had begun and the first bike finished was a Suzuki GSXR 750 Street Fighter with more than a hint of Cafe Racer. 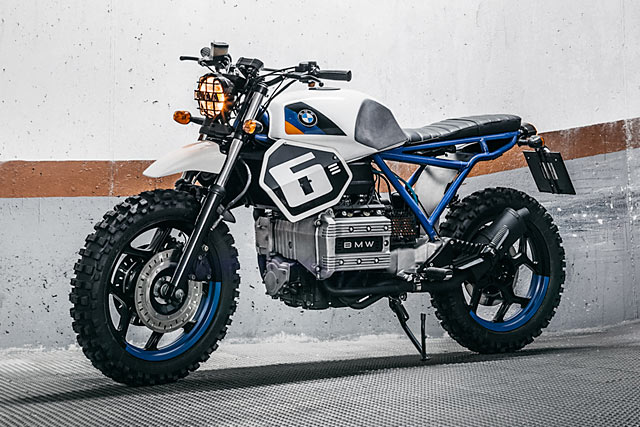 But approaching the build of his second creation Carlos makes no apology about where the inspiration comes from, “Easy; the BMW K100 built by Karlito Ed Turner was the most influential inspiration.” and if you’re going to pick a role model for a builder few are better than our friend Ed. Other machines like the classic Montesa H6 would provide ideas but first Carlos had to find the right donor machine. The K75 was discovered in reasonable condition near Zaragoza and the cash was paid. This was not a commissioned build, Carlos would buy and build the bike with his own money and hope his new business venture would show a return. 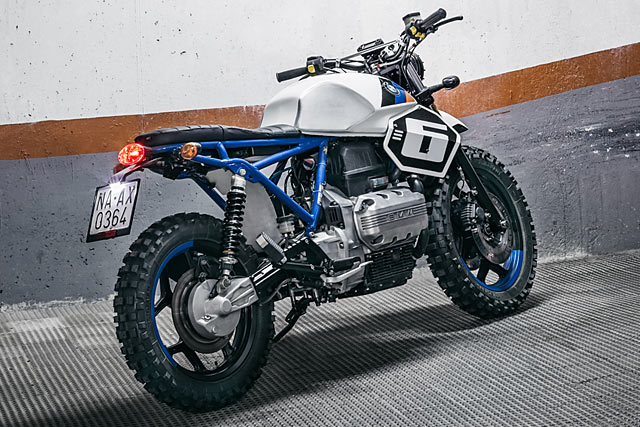 But clearly the stress to succeed hasn’t fazed him with the entire build running like clockwork. The donor bike was a good runner but drawing inspiration from BMW’s HP R1200 meant a full strip down. Not only did it allow for the cleaning and replacement of many parts but left the frame a blank canvas to be sprayed that gorgeous HP Blue. But before he was wielding a spray gun, Carlos first had some ideas he could bring to life with his new TIG skills. The rear subframe was cut off and an entirely new piece fabricated that shortens and raises the rear 50mm. 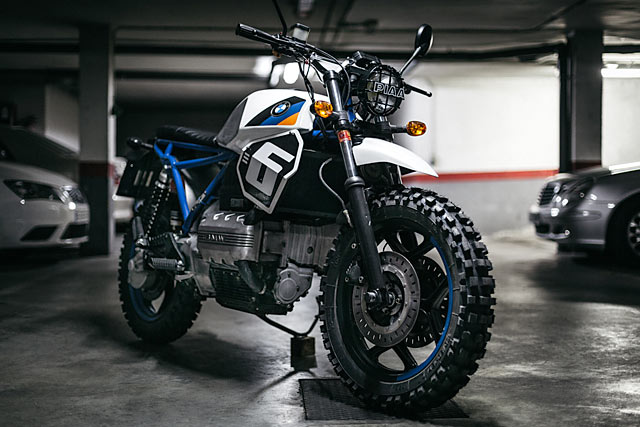 The new subframe also acts as the rear mounting point for the tank that allows it to sit in an entirely more aggressive fashion on the frame. With the basic look now sorted the frame was closed out at the rear with a new hoop and the whole thing sprayed in that BMW Blue. Having gone up so high on the frame the seat is a sleek and slender unit, black leather, in a two up design. The simple seat is offset by the unique lines of the K tank, further accentuated by the paint scheme that is a mix of everything from white, raw metal and splashes of colour. 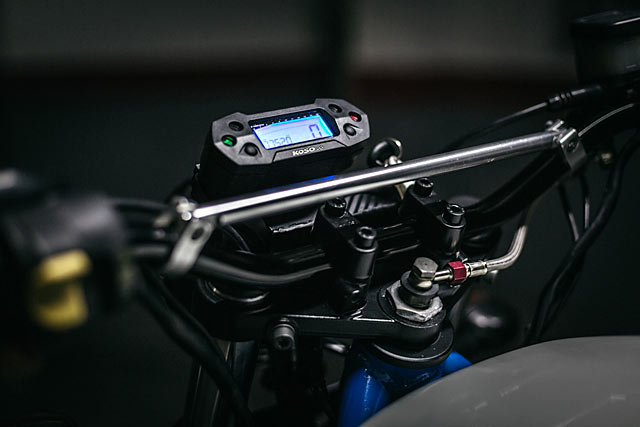 Having raised the tank and ditched all of the K series bike’s awful fairings it left more of the cooling system exposed than was to Carlos’s liking. So a set of race plates are neatly folded and shaped to match the tanks lines while providing more of that street warrior look so popular in today’s trackers. The front fender was cleverly re-purposed, that’s the stock road item, cut and then mounted below the triple trees for the full off-road look. 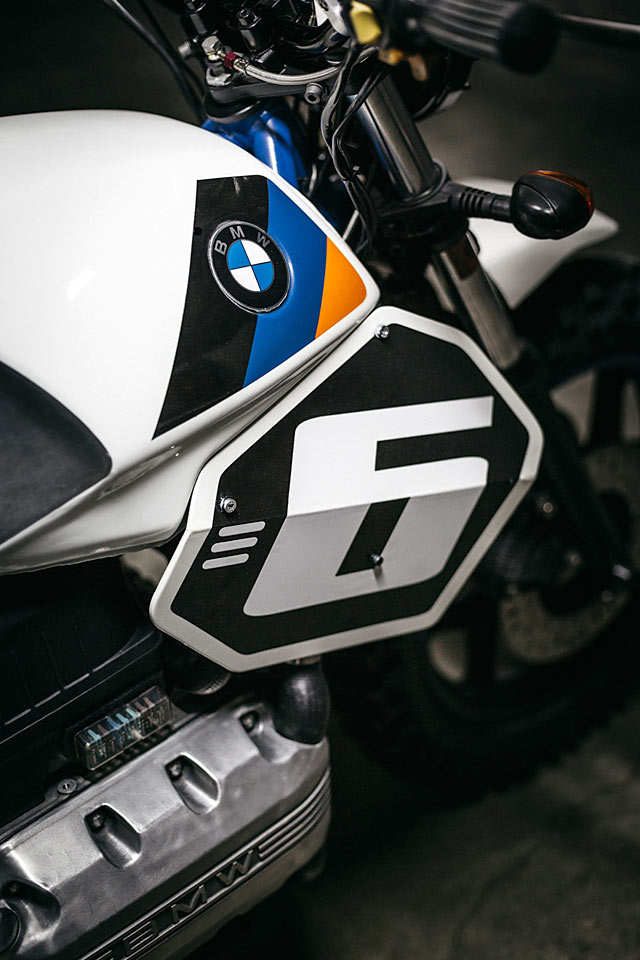 The engine in the K75 is a peach, plenty of torque for all occasions, just enough power to have fun and shaft drive for unbreakable reliability. These things will still be going when most others have entered the wrecking yard in the sky, but the electronics can be a mess. So to clean everything up Carlos took his time to “relocate all the wiring harness and electronics into the airbox including a very small LiPo Battery.” To give his ride a raucous note, Carlos then fitted up a SBK Leo Vince Carbon muffler with a custom midpipe. 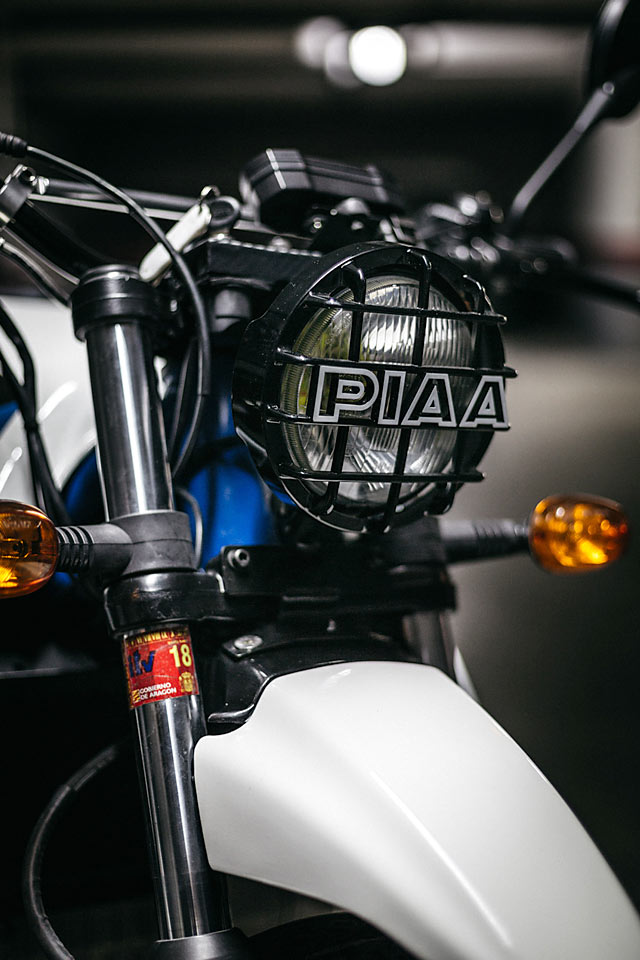 Having turned the old tourer into a high-waisted harder charger the suspension had to be brought up to spec. Searching through the large YSS catalogue Carlos found a shock normally meant for a K1100 that would give him the 35mm extra length he needed while providing far superior dampening over stock. The standard front forks have been given a refresh and sans gaiters you get an idea of the enormous amount of wheel travel there is to play with. While twin disc front brakes ensure there is always plenty at the lever should you go a little overboard.

Those levers are mounted up onto a set of new Hebo enduro handlebars. The rest of the front end is perfectly utilitarian, just the ticket for a BMW, with a grilled out PIAA headlight taking pride of place. This look along with the amber lensed indicators and rear numberplate stay are straight from the Ed Turner playbook; making no apology for functionality. A Koso digital speedo provides just enough information and is mounted on a bracket of Carlos’s own design. 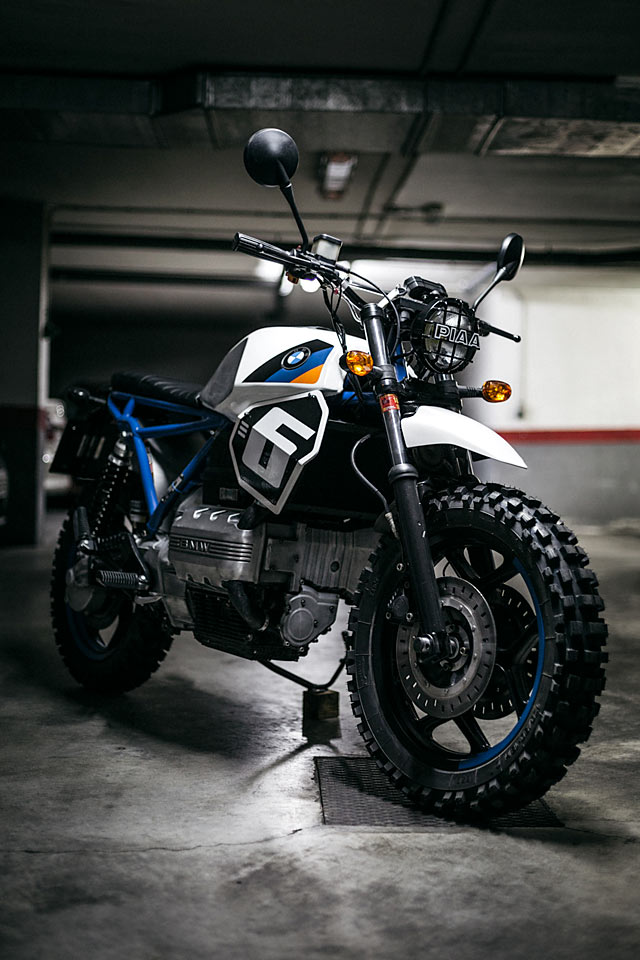 Which brings us to the only thing he didn’t do on the build, mount those insanely aggressive Heidenau K74 all-purpose tyres to the repainted BMW rims. With his age getting up in years I should probably call him Mr Ormazabal out of respect. But also because anyone who comes this late to the game and delivers this kind of quality deserves more than a tip of the cap. With the Super Bike crackle, HP Paint and a go anywhere machine, Carlos won’t find it hard to drum up new business. The Foundry MC is officially in full effect. 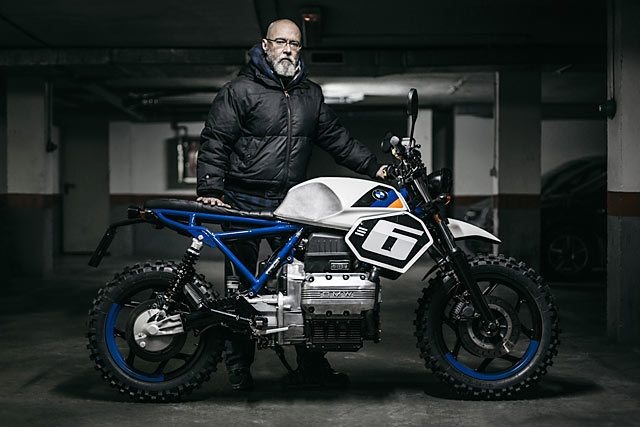 Carlos demonstrates the joy of six