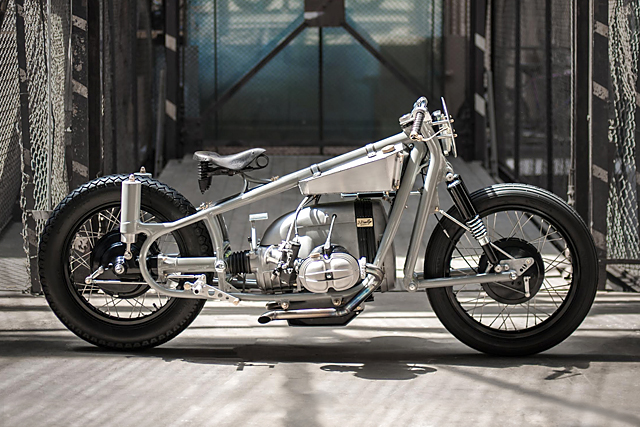 Let’s just get it out of the way shall we? C’est magnifique. Because there was simply no way to write about this exquisite French crafted BMW without saying it. This machine is the answer to the question, “Can you build a motorcycle that has it all?” Many say it’s an impossible task; exquisite vintage looks, bulk horsepower with race-winning speed and capable of a reliable Sunday cruise with corners to kill. But Ludwig Ascher wanted  everything and as an airhead specialist at his shop St Brooklyn Motorcycles in Saint-Brieuc, Brittany, he decided to build a BMW with the lot. It’s a 1955 BMW Sprint Racer with a hefty heart transplant they call “L’Etonnante”. 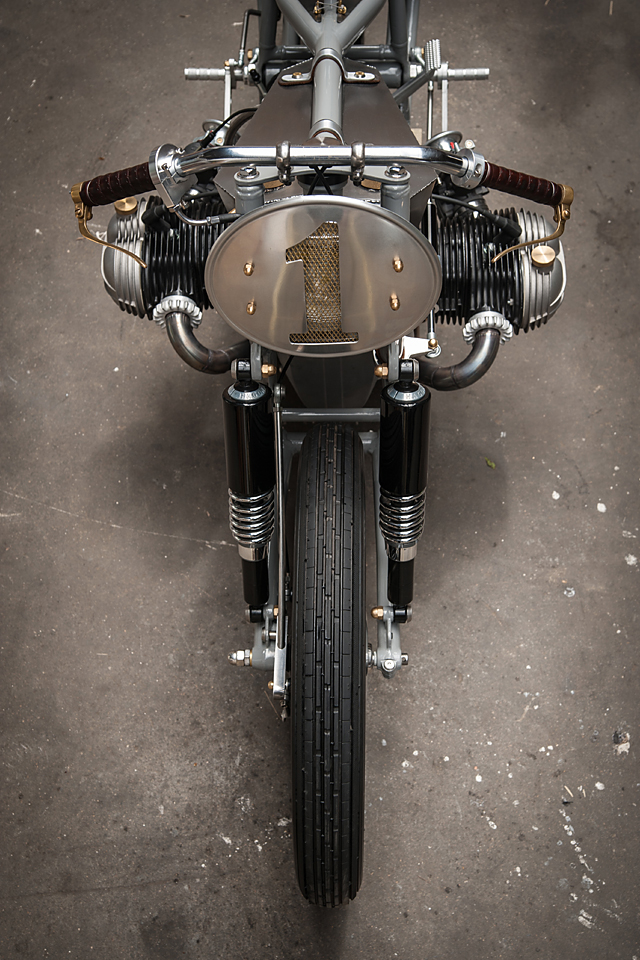 It means “The Surprising,” and for Ludwig, this is all down to it “not only being surprising because of its unique design, but also thanks to its exceptional performance.” What is truly remarkable is that although he has built the BMW for the express purpose of competing in the 1/8th mile ‘Sultans of Sprint’ drag racing series at events like the Glemseck 101, the BMW handles the curves of a coast road a treat. And despite the big horsepower, the engine ticks over smoothly like cream in a churn. All of this is done from a beautiful French Barn-come-workshop where our stylish Breton builder arrives to start the day in a BMW car; such is his loyalty to the brand. 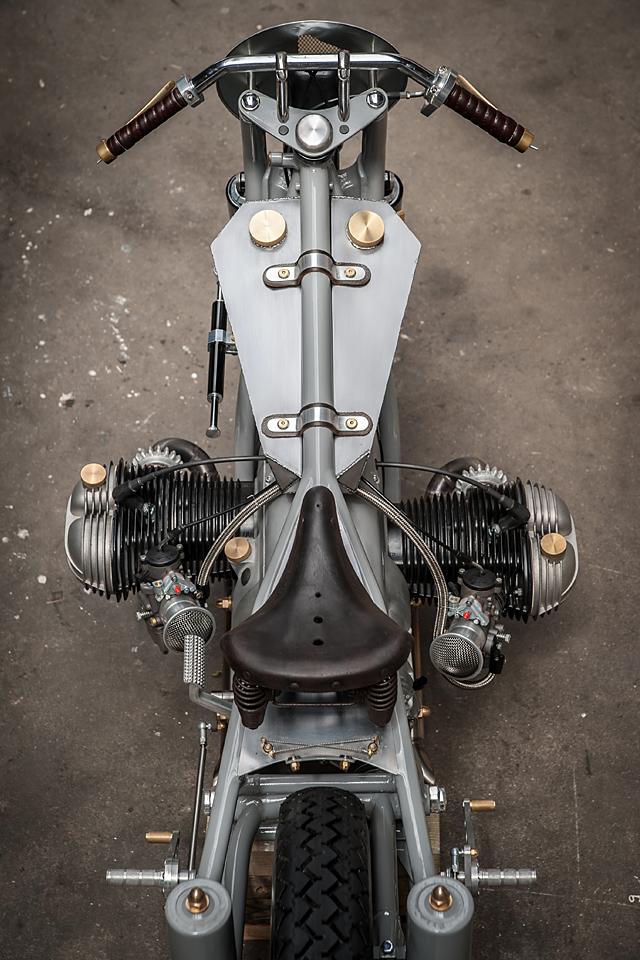 Starting with a bare ’55 BMW frame, Ludwig spent what must have been countless hours getting the metal of the chassis meticulously smooth. All of the welds, every twist and turn in the metal has been kissed and caressed until each line flows seamlessly into the next. With metal work this good, the natural grey colour choice simply allows the eye to enjoy every curve. In contrast, the hand-shaped raw metal tank takes on a more vintage and purposeful feel, with its exposed welds and deliberate hard angles. But all of this is softened with the use of brass for many of the fixtures and fittings that instantly reminds you of the classic racers of old. Which is exactly where Ludwig got his inspiration, having spent considerable time marvelling at the Bonneville record chasers of yesteryear. Typical of a race machine, the bike’s front wears a numberplate with numero un meshed out in brass. More of the copper and zinc alloy is used on exposed nuts throughout the build, with the inverted levers getting the biggest dose. These take pride of place on the short length boardtrack bars that are finished in the best leather available, the way pretty much everything has been done on this build. 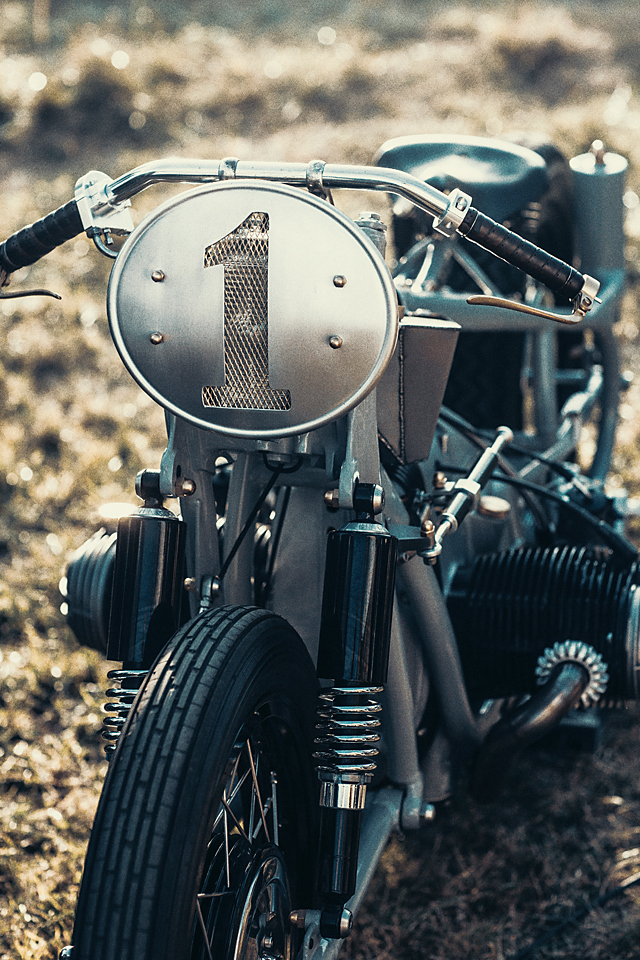 The beautiful front suspension is a leading link design known as an ‘Earles Fork’ – the creation of Englishman Ernest Richard George Earles. Unlike all telescopic forks that dive under braking, the Earles unit rises providing easier steering input under turn in. While telescopic fork technology has long since surpassed such a design, the unit does prove valuable on such a drag bike, providing precise control to keep things straight. It also looks damn cool and Ludwig has rebuilt the entire unit with new and NOS components. There is even a little extra suspension from the incredible 1930’s French motorcycle seat that is a work of art all on its own. 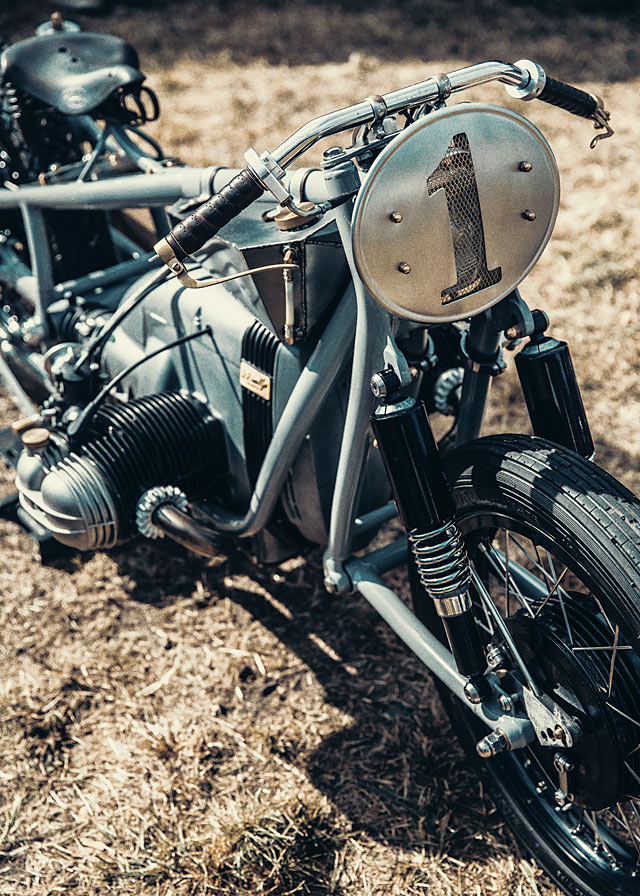 The rear suspension is no less interesting, with this era of BMW making the slow move away from the rigid and plunger frames. Combined with the Earles front end, L’Etonnante essentially has a swingarm both front and rear. The backend unit uses oil under pressure shocks to give a compliant ride favoured by law enforcement at the time. The genius of their presentation in this build is Ludwig’s use of brass fittings, rose joints and bush bearing rod ends throughout the build. The result is the suspension, foot controls and their respective mechanisms all adopting a uniform appearance that is both a mechanical masterpiece and visual feast for the eyes. 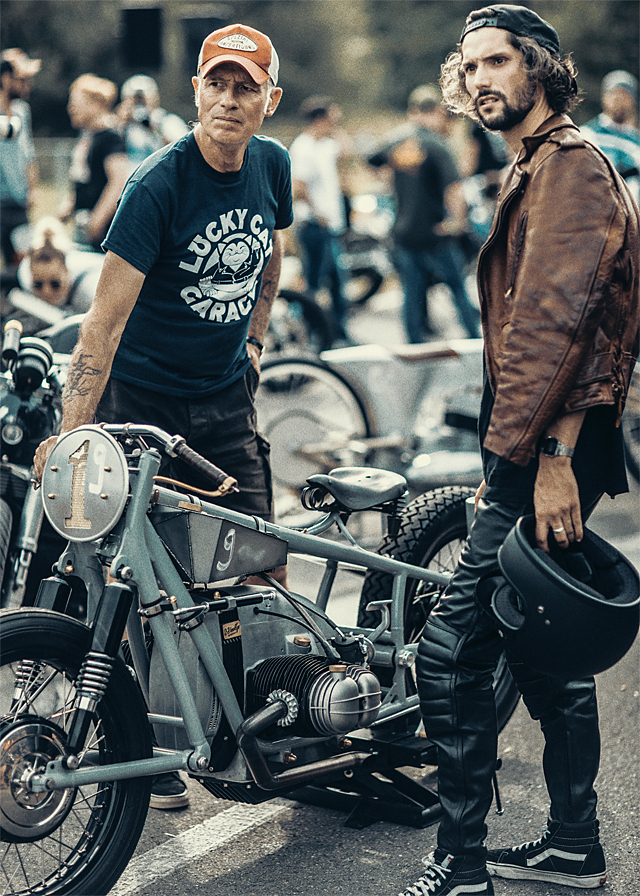 As with any bike built to race, the engine in L’Etonnante makes maximum power, but this Bavarian barnstormer is truly something special. Unlike the rest of the bike, the basis for this motor is a 1980 1000cc unit to take full advantage of the bigger cubes and the thirty-odd years of extra engine development. Still an airheaded boxer with 2 valves per cylinder, the improvements come in the form of Ludwig’s engine building perfection. Balanced pistons reduce capacity to 853cc and swing on a set of polished rods that are balanced to 0.1 of a gram. These run inside modified cylinders that are all bolted together with custom copper gaskets for the perfect seal. 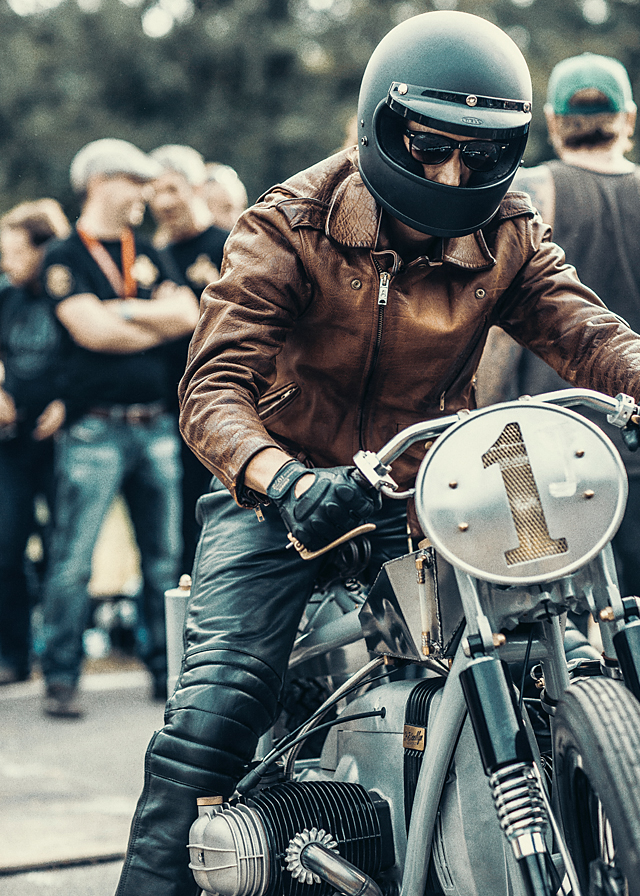 The heads are just as special, with modified and resized intake and exhaust ports that now utilise smaller custom valves to maintain gas velocity with the reduced engine capacity. Fuelling is courtesy of a pair of Dellorto PHf36 carburettors, wearing custom velocity stacks and tuned to absolute perfection. Lighting the fire is an Infinitech tcip4 inductive ignition system capable of sparking the enormous amounts of fuel the engine ingests. And spitting out the waste is a set of handcrafted stainless steel headers that, despite their short length, are not overly obnoxious. 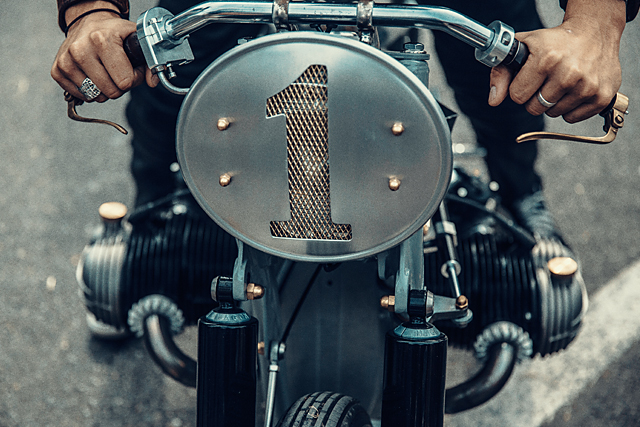 This can be attributed to the remarkable job Ludwig has done at setting this engine up. While it might be a race motor, it starts first kick and idles as smoothly as any modern fuel injected machine. The only hint something is serious about this beast before the throttle is cracked is the fuel spitting from the mesh filters as its BMW boxer burbles away. The visuals are just as impressive, with the airbox eliminator giving the engine a beautiful vintage look, while a perfect combination of raw metal and black paint with stunning brass badges captivates the eye whether near or far. Again with that damn European swagger

Slowing the fancy flier down is left to the beautiful factory drums with the front packing more power than you may expect with it being a duplex item. The rear single drum makes up for any design inefficiencies with its sheer size. And with both having been fully rebuilt, they look better than the day they were born. Acting as the hubs, Ludwig has re-laced them both with stainless spokes to a set of a pair of lightweight blacked out rims.

Reducing unsprung mass is a vital step when building an 1/8th mile racer, but you can expect that by the time L’Etonnante hits the track, the vintage Avon rear tyre will have been reduced in size by a good few smoking millimetres. The last word is Ludwig’s, who after all that hard work is nothing but the best of French in describing his beloved, “L’Etonnante is indisputably a hypnotic jewel that is just asking to roar.” We couldn’t agree more. 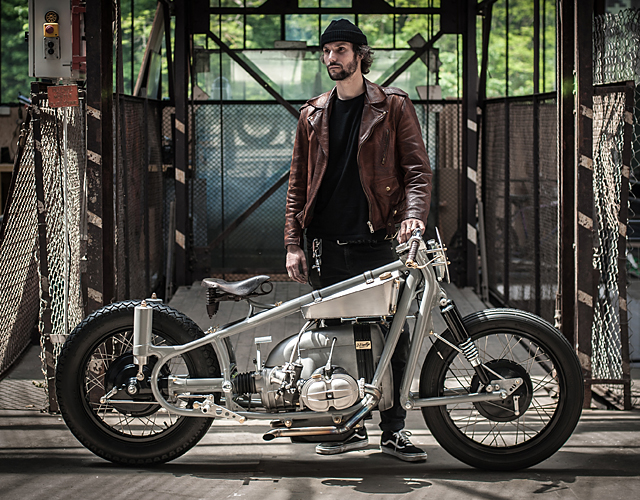