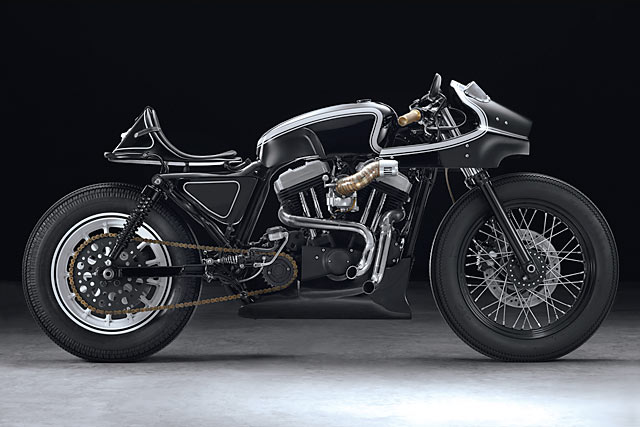 It can take years. Each second feels like an eternity. From the moment you spot ‘the one’ crossing the road in front of you until the day you finally get up close and personal. But when we spotted this sporty shorty in the workshop corner of Malaysia’s Beautiful Machines, we knew we had to have her. That was when they were preparing their incredible ‘Monster’ for the Yokohama MoonEyes Hot Rod & Custom Show. But we couldn’t just show her off to you in any old state, so we took one for the team and waited until we could get just the right shots. Now for her big debut we can finally present ‘Puting Beliung’; it means ‘Tornado’ and she’s a cafe‘d Harley Davidson Sportster XL1200N Nightster that’ll literally sweep you off your feet. 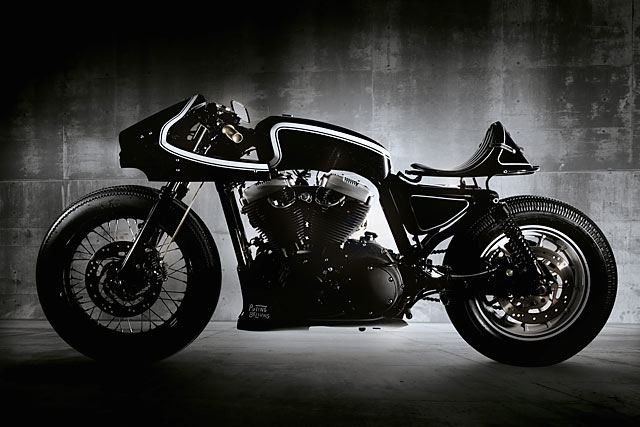 Five years ago, Rajay Singh and Eng Chin Guan decided to set up Beautiful Machines as a Harley service centre. But their creative side soon got the best of them and now rather than performing simple oil changes they build complete one-off creations. Having been around the mechanical side of motorcycles since their childhood, they don’t simply craft show bikes that barely run. In the growing trend of South East Asian custom builders they sculpt rolling art works, but this one rides so well she’s done more than a handful of cross-country journeys with the owner right there in the saddle. 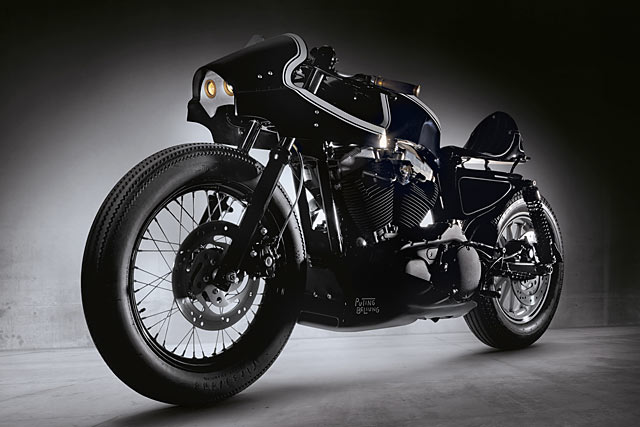 “And if that doesn’t happen, we then have a fist fight behind the shop and the winner’s ideas stay.”

Like many a Beautiful Machine, this one started life as a Harley Sportster with the inspiration coming from “a lot of late nights and too many cigarettes. We wanted a machine that seemed to move silently and that mysteriously disappears into the shadows,” explains the crew. But the actual design process is a team effort with everyone at the shop involved. “In our shop each build is a collaboration of many talents, we never use computers or sketch things out. The process is very organic; we kind of start in one direction and one good idea will lead to another. And if that doesn’t happen, we then have a fist fight behind the shop and the winner’s ideas stay.” 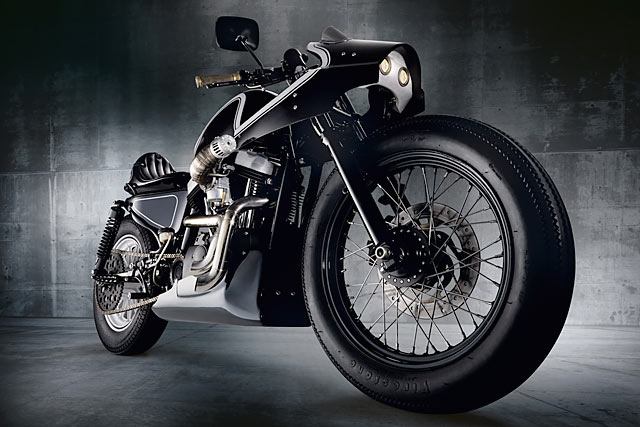 Of course no punches were actually thrown but many of the stock Harley parts were, straight onto the floor where they belong. With that cathartic experience out of the way, the styling of the machine could begin and this Sportster is all about the oil tank. Minimising its visual impact was the goal, a clean middle from which the rest of the bike could flow. The stock unit is scrapped and a neat new item was hand fabricated that follows the frames lines rather than bulging out. With a thin waist, this girl then needed bigger proportions up front and the stock tank has been beautifully re-sculpted: long, gently curving and totally smooth to the touch. 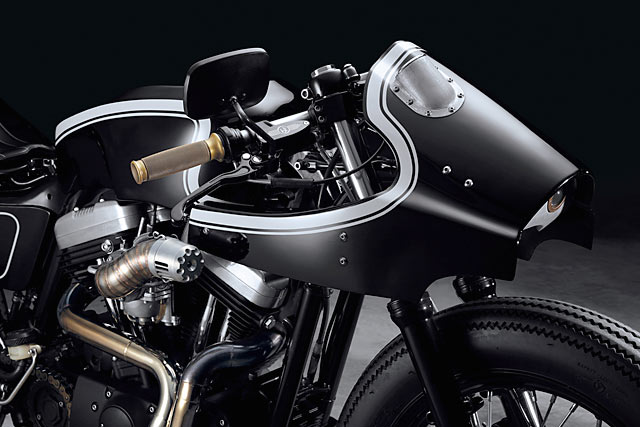 Still talking about the bike, the front end is a total re-design of what you are ever likely to see from a Harley and is a signature of Beautiful Machines. The half fairing style cowling is clearly inspired by bikes of old, but with a totally alien and futuristic feel. This is further accentuated by the way it hangs far forward over the front tyre with a set of eyes, twin headlights, recessed back into the piece for an aggressive feel. It might look all for show, but with a gentle up kick to the design, a lucky Malaysian journalist who got to ride the Sporty reported far better wind protection than he could have ever imagined. 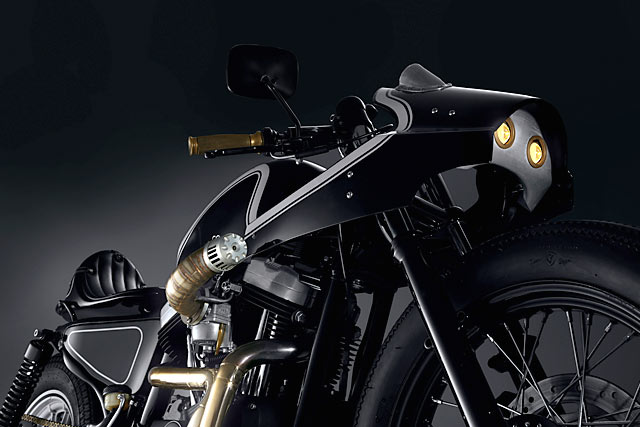 Back to the rear end, and with the subframe now all but removed the seat base and tail-piece hover over the frame to provide more negative space around the custom oil tank. This is achieved by bending and welding thin round bar and mounts normally used when fitting up a rear fender. But whereas the front end is all about exaggerated proportions, the rear is short and purposeful with a big round cafe racer styled hump that would fit perfectly into the hands. 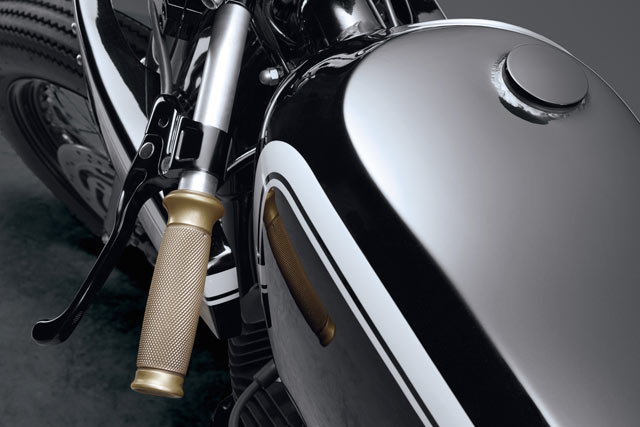 The seat itself is not designed for those who like a lot of padding but the quality of the leather work and stitching is simply first class. The lush black paint work with racing stripes wouldn’t be controversial at most shops, but “Deciding on the colour, all our builds to this point had been finish in raw metal and this was our first ‘painted’ bike so can you imagine the number of fist fights we had?” But instead of fists flying, it was paint guns and with the paint laid on thick, the black gives a rich depth that only adds to her impressive lines. 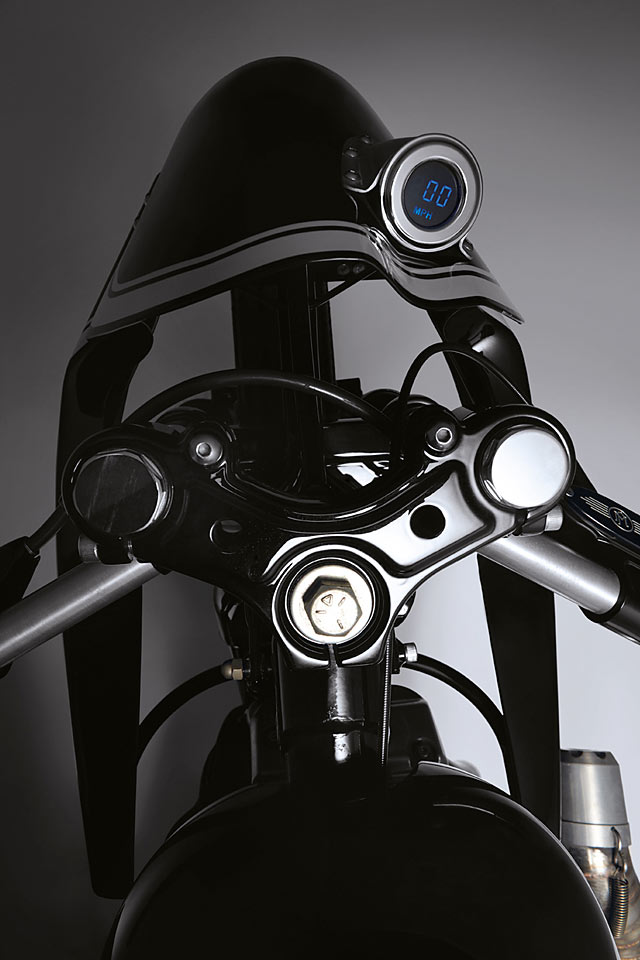 With the fists down and mouth guards out, work turned to the engine and again the oil tank dictated so much of what would happen next. The team decided there was no point having gone to all that effort to create a slim profile tank to improve the lines if there was then a bird’s nest of wires on display. 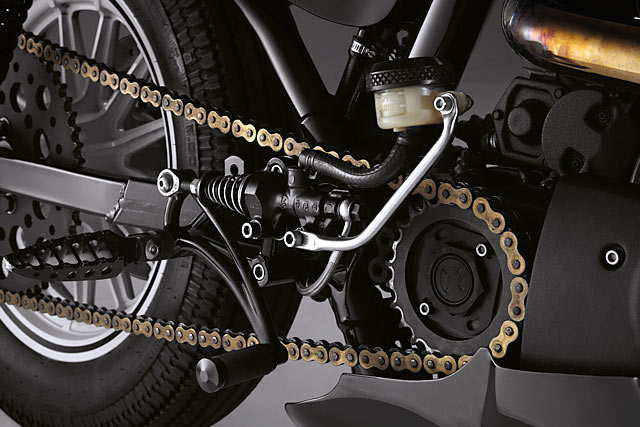 So the fuel injected 1200cc V-Twin has had the squirters removed and an old school solution put in its place. An S&S carb now fuels the Tornado with a custom air filter mounted at the end of a beautifully crafted lobster cut intake runner. The exhaust doesn’t let down the show either, making a hell of a noise blasting out the bike’s sound track with twin side exit pipes.

“So the fuel injected 1200cc V-Twin has had the squirters removed and an old school solution put in its place.” 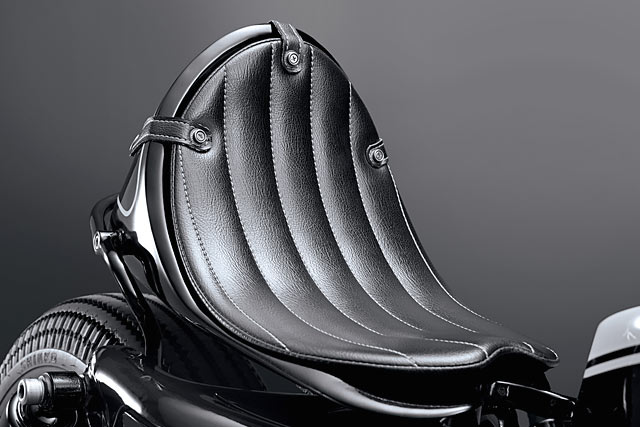 Helping to centralise the mass of the engine, it was decided that a belly pan would suit the look of the build. So the skilled metal workers at Beautiful Machines were back out with the hammers and sand bag, sculpting and smoothing until the alloy was a perfect fit. But having covered up some of the mechanicals, they then wanted to create more of that raw and aggressive feel. To this end, the belt drive and its associated components were tossed aside for a chain and finger chomping sprocket teeth. 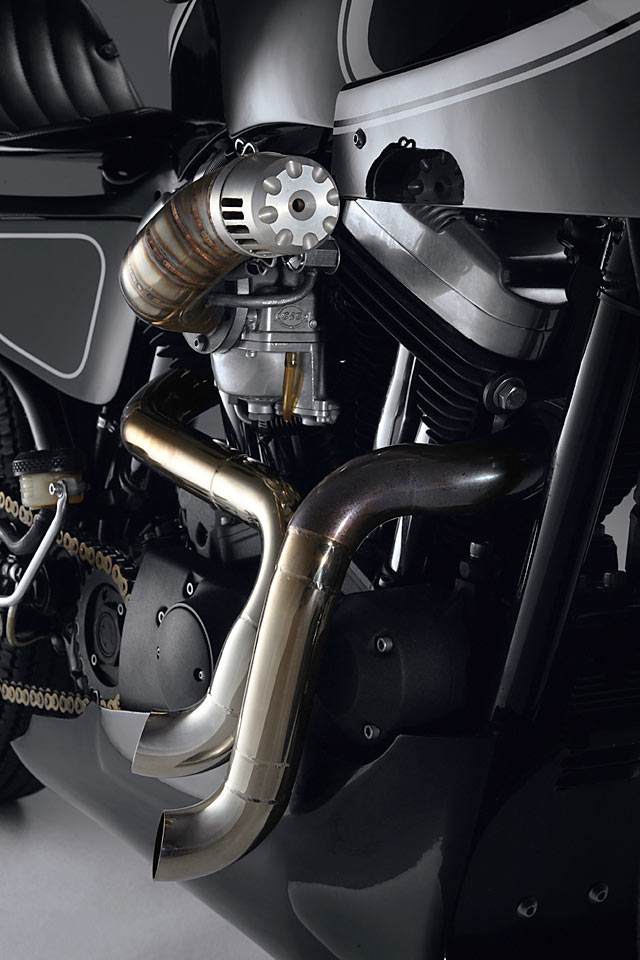 With the bike being built to ride, form didn’t totally steal the show as functionality is a high priority on even the wildest of Beautiful Machines builds. Although the bars have been switched out for clip-ons their wide-angle still retains plenty of leverage and they’re finished with turned brass grips. 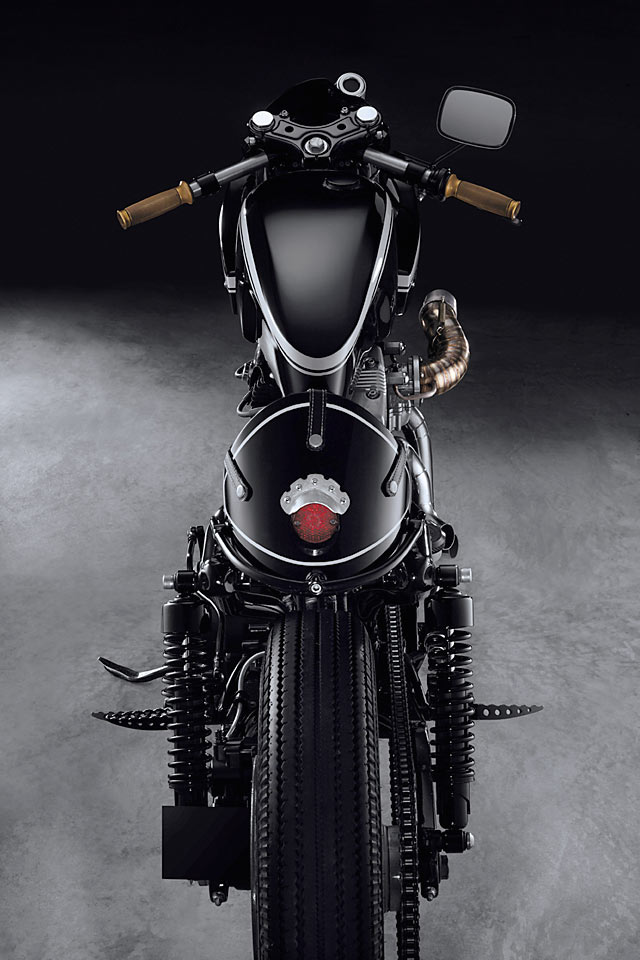 A touch of the 21st century is added to the Harley Nightster with a Digital speedo moulded into the front cowl. A similar trick was used when piecing the tail light into the aluminium cafe hump and finally Puting Beliung was ready to wreak havoc. But as we close out this love affair with a hottie we chased across continents, we take one look back as she tears away into the night, and we reminded once again why it was love at first sight. She looks so good, but man can she cause some trouble. 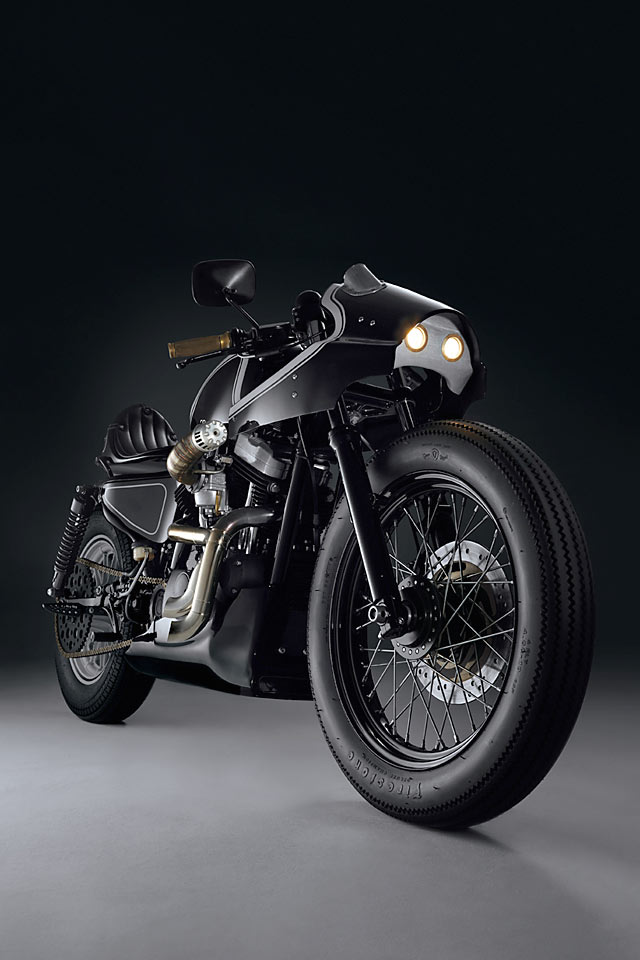