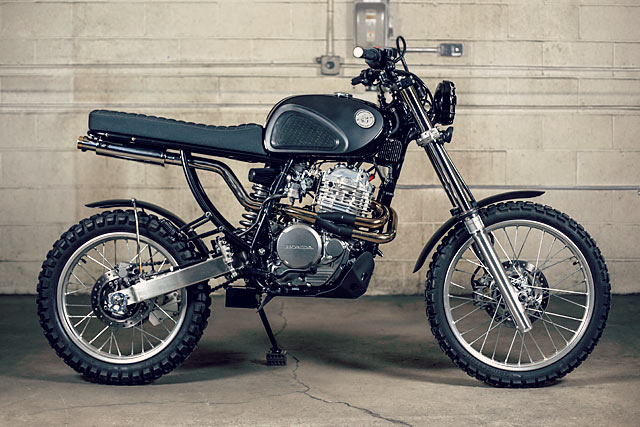 New tools customising old bikes. If you had to be blunt about it, that’s probably how you’d surmise the current custom bike scene. You need only to look at the old guard with their thinly veiled cries denigrating the beards and beanies to see that a ‘new tool’ generation has taken over from the old one. But today’s bike flips that equation on its coiffured head. With tools that date back to New York in the 1880s and a bike that’s barely out of diapers, today’s Honda XR650L from Hill Moto, still ticks all the cool custom boxes. 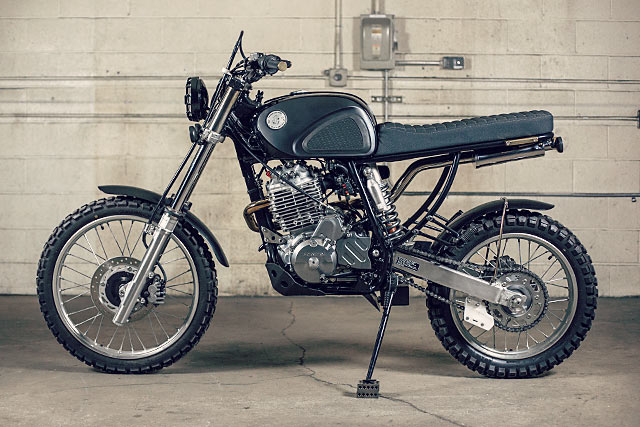 Hill Hudson was in a philosophical mood when we caught up with him.“I’ve spent the last four years questioning the meaning of life under failing fluorescent lights, in the back of a cinderblock industrial building with no windows. I had no idea I would end up here, working as a metal fabricator or building motorcycles for clients. But when I was in art school a handful of years ago, my Brooklynite Grandfather passed away leaving behind an odd but inspiring legacy.” 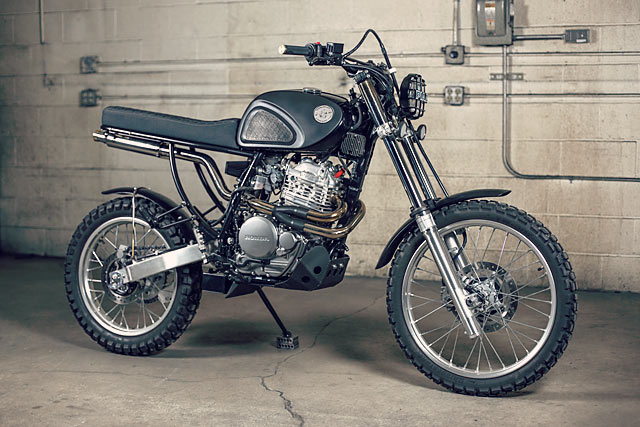 Not a bike for the height deprived, we’re guessing

That side of Hill’s family owned and operated a lace paper doily factory that his great great granddad started in New York in the late 1800’s. Sounds like a movie script already. “When it closed down, my older brother loaded up what remained of the factory and drove it from New York to the west coast. Destiny stepped in, and we both took to the calling to keep our grandfathers tools in motion, hence my slogan “Handmade with a Dead Man’s Tools.”

Then we get down to brass tacks about Hill’s new build. “This go around, I’ve built up an Vintage Dirtbike 2014 Honda XR650L. The client wanted the bike to be as practical as possible, while still keeping the doors open for me to run free with the custom aspects. I essentially wanted to build a motorbike that was a simple mix of modern and vintage.” I think I’m seeing a theme here… 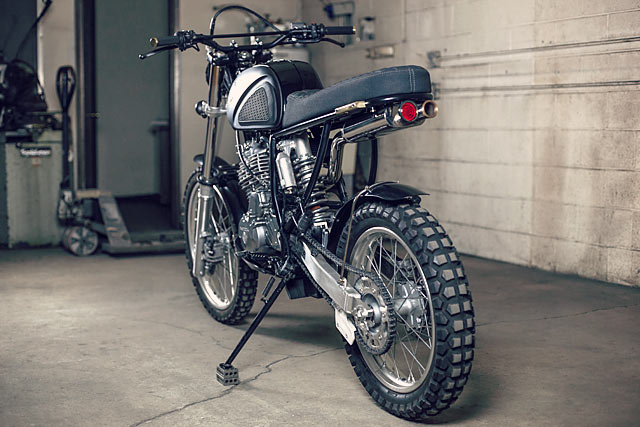 Unusually for a private build, the client purchased the bike right off of the showroom floor and wheeled it into Hill’s shop after putting just 500 miles on it. “The first thing I did was to strip it down and remove the subframe; I wanted to lower the height a little and smooth out the bike’s defining lines.”

Hill fabbed up the exhaust and muffler from stainless and had some fun tucking it up under the seat, which is something he’s apparently been waiting to do for a while. “I was worried how the bike might sound because I’ve never made a muffler before, but it sounds really nice actually and it’s not too far from the stock muffler sound.” 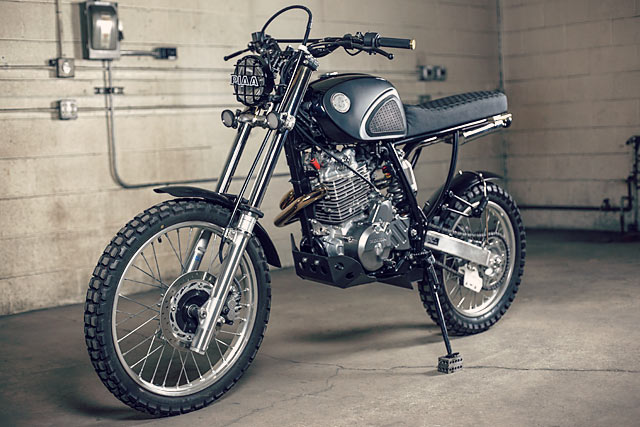 As is par for the course with any decent builder, Hill wanted to make everything harder for himself so he wasted an entire month building a bespoke pneumatic planishing hammer from scratch just to make the fenders. “I was fixing to build the tank too, but then one day I put that Honda CB77 tank on the frame and I just couldn’t take it off. I loved how it looked. 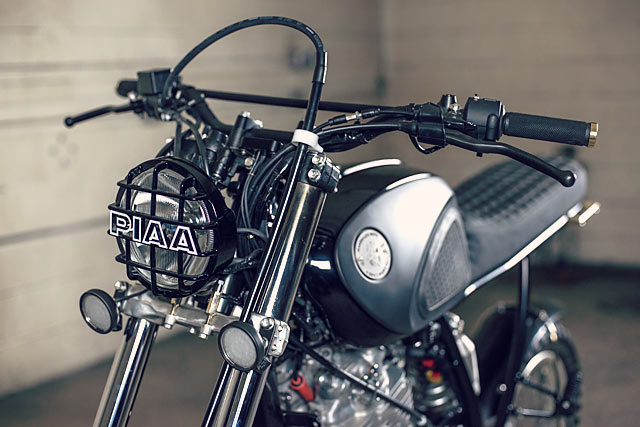 “But I had the most fun, and spent the most time, on the tail-end of the bike. I figured that’s the view everyone has when you rip past them, so why not make it a good one, right? I offset the machined taillight to balance out the opposing machined brass exhaust ring, which were both in turn sandwiched between those amazing little Motogadget blinkers and a brass grab handle. It was fun, yes. But it was also definitely the hardest part of the build.” 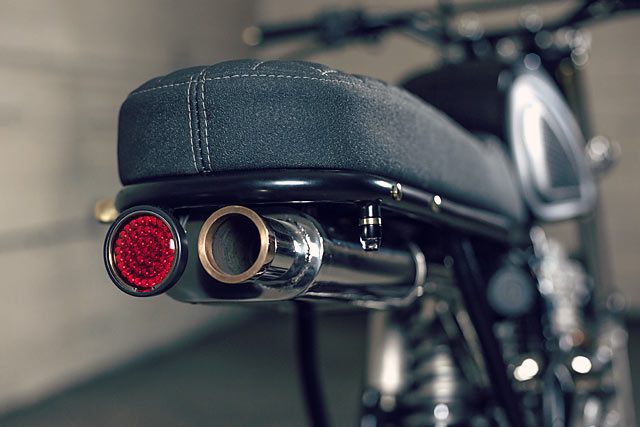 “It’s hard to say what I like best about the finished bike, mainly because I’ve been staring at it for over a year now. But I did have some compliments come my way at this year’s The 1 Moto Show in Portland. The bike actually won the ‘Best Dirt Bike in show’ award. I was taken aback, because I’ve never won anything before let alone an award for a bike I’ve built.” 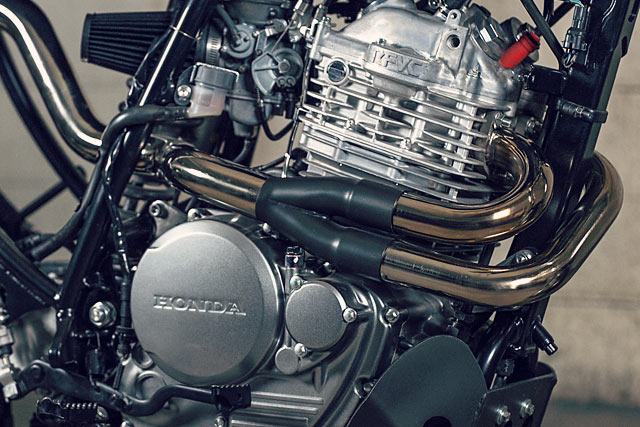 Hill says that, at the end of the day, he put way too many hours into the Honda for how simple it looks. But as the saying goes, “You have to work incredibly hard to make something complex look simple.” “I guess that was sort of the goal,” Hill concludes. “To keep the bike practical, rideable and not overbuilt.” Goal scored, we’d say. 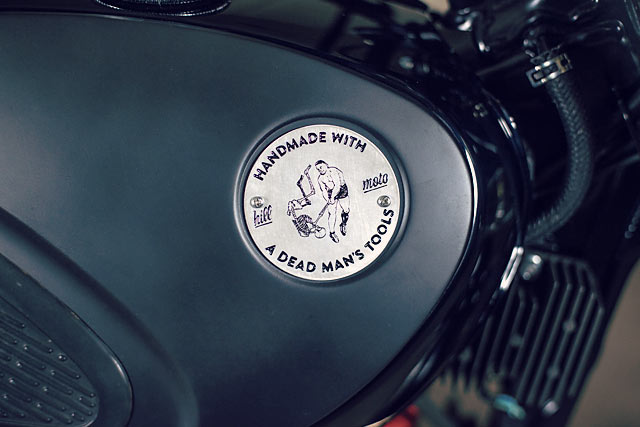 Pretty sure the dead man won’t be needing them