BRAKE THROUGH. A Royal Enfield Thunderbird from J&D Custom Co. 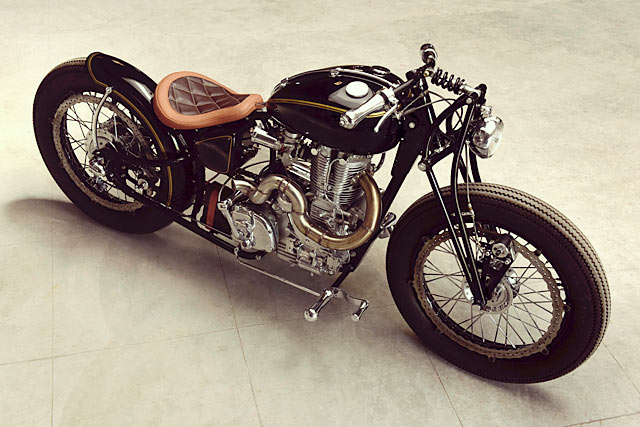 The Royal Enfield motorcycle has long occupied the imagination of millions of Indian motorcyclists, and the company has earned a cult-like following around the world. The motorcycles earn their popularity because of their old school designs, the thumping engine, and a real hand built feel. But more than anything, it’s the bike’s ability to be customised that makes us love it so much. It has served as the chassis to build dream motorbikes for thousands of custom bike builders just like me. So here’s my story. 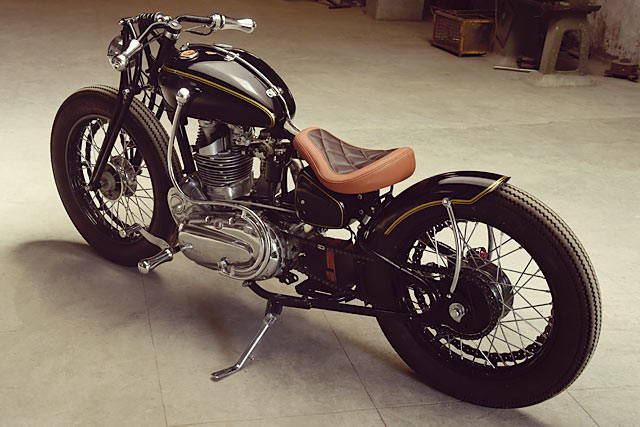 My name is Jay D. Patel. I am a custom motorcycle builder based in India. I established J&D Custom Co. after dropping out from my engineering studies. It was my passion to design & build custom motorcycles on my own that made me do it. So I started working at my father’s engineering workshop to learn some fabrication and technical skills and after few months of training, I bought a used 150cc Pulsar and built my first custom bobber.

Actually, I still build custom motorcycles at my father’s workshop, which is a proper setup with a lathe, drill machine and proper tools etc. I also built an English wheel for metal shaping which is helping me in a great way. I don’t have any workers or helpers, as I do all my work on my own. So it’s like a one man show: from designing the bike, to fabrication, to welding – I do it all. 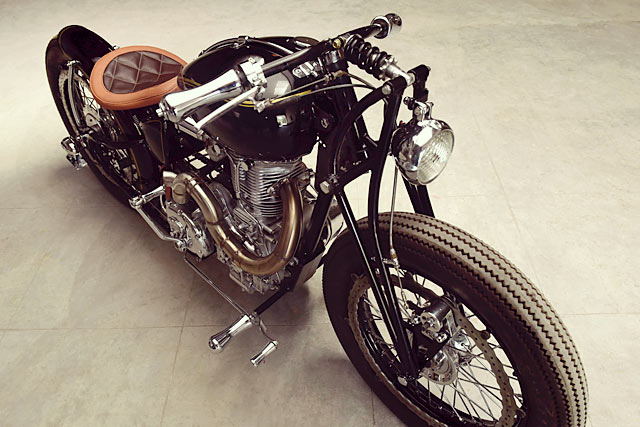 This is the first time I have attempted to build a custom bike on the Royal Enfield platform. I built it to pay homage to the motorbike which has fuelled the minds of thousands of custom bike builders worldwide. The bike is built with this thought in mind, which I nodded to by keeping the iconic tank and engine in focus and then blending it with other elements of a classic bobber. The hardtail is representative of the commitment of custom bike builder, “No matter how hard the road gets, just keeping thumping ahead.” 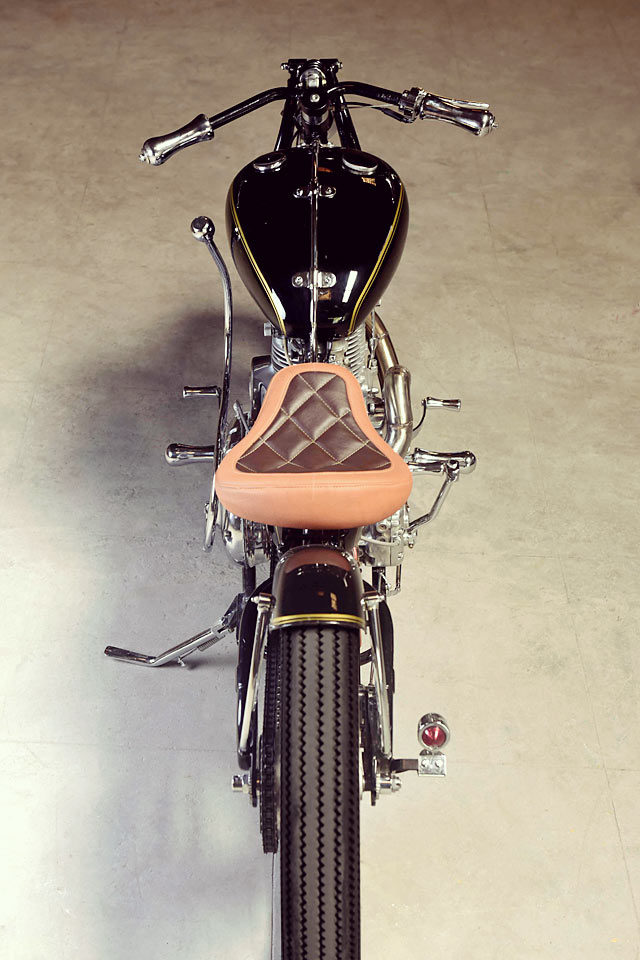 The build is a great story to tell, as it’s a mixture of old school aesthetics with modern parts. I always try to experiment new things in every build I do, but this build has many of them. As mentioned, it’s based on the Royal Enfield Thunderbird 350cc AVL block. Apart from the engine block, everything is handmade from scratch. The fuel tank was inspired by Royal Enfield’s signature very own signature tanks, while the dual fuel caps on it adds a great vintage appeal to the bike. The paintwork of the bike is also inspired by legendary Royal Enfield pin-striping. 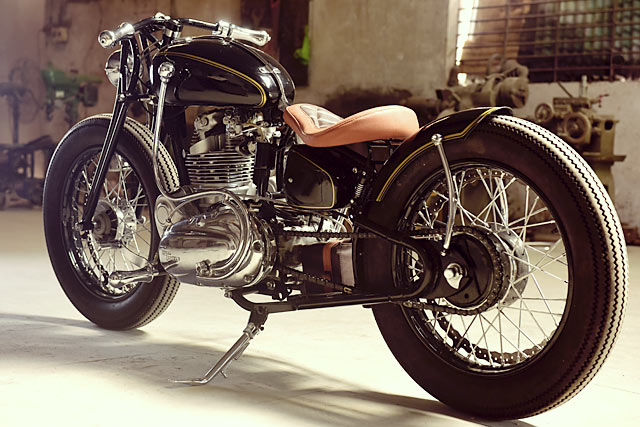 The front portion gets some old school design touches, with a classic linkage suspension system and a 4 inch aluminium headlamp, while the other half is a hardtail. The carb equipped with a handmade velocity stack filter for fresh air while the exhaust is handcrafted from stainless steel bends which have colored welding joints, achieved by me after 1 solid week of TIG welding practice. All the professional welders in my town said that this kind of weld was not possible. 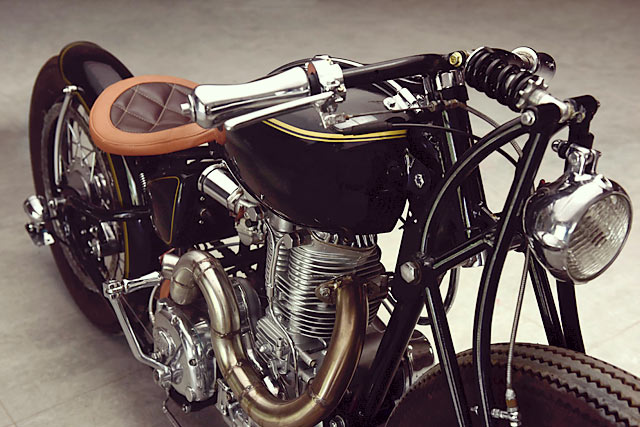 The electrical system of the Royal Enfield is all hidden in the box under the seat. It took 4 days to shorten the wiring loom into something which would fit into the box. It was a bit challenging, as a new wiring loom was not available, so if anything goes wrong then it would have been very hard to get the bike started. Everything from the starter relay to the rectifier or anything else electrically related is kept in that box with the ignition key, push button starter switch, a toggle-type kill switch and a light on/off switch. 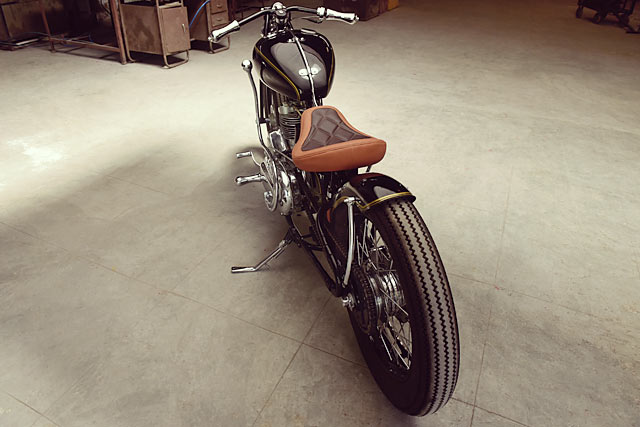 The handlebar grips and footrests are machined from raw steel bars, while the front brake lever is handcrafted. The most exciting feature of this bike is probably the suicide clutch and jockey shifter. The owner of the bike asked me if I could build a jockey shifter like old Indians or BSAs as he wanted the old school feel which would really grab the attention of everyone. The seat is made of pure leather in a two-tone combination with diamond stitching and a matching battery case. 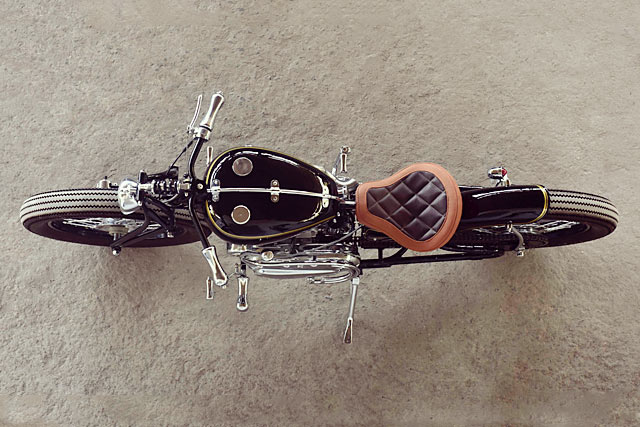 Of course, the perimeter discs were very hard to realise. But I took the challenge and you can see the results. It took almost 3 months for the designing and manufacturing. I made 4 or 5 different designs and after improvising, I finalised the 6th design.

Welding mounts onto the wheel rim to mount the discs was also a very challenging task as all the brackets needed to be perfect parallel to each other for the perfect fitment of the discs. After I finished this process successfully, it was time to design some calipers for a proper braking system. But instead of going with hydraulic calipers, I choose mechanical calipers as I wanted to give an old school look as well as some mechanical lever charm. 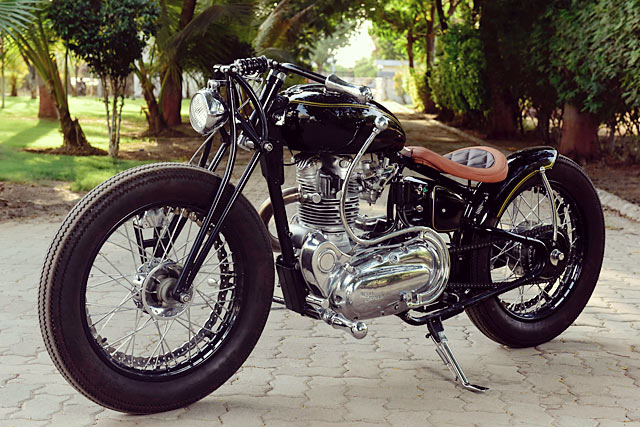 Its hard for me to choose any best parts of the Royal Enfield, as it is the combination of each and every part which creates the whole design. Basically, I designed all the parts while keeping the other parts in mind so I could create a beautiful example of pure craftsmanship and art. But the two things I admire the most in the build are the vintage rubber tyres and the perimeter discs. I think without these parts, the bike will be not as charming as it is now. 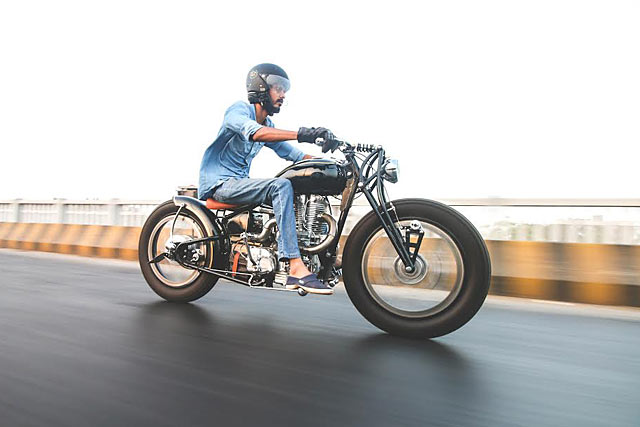 Jay on the way