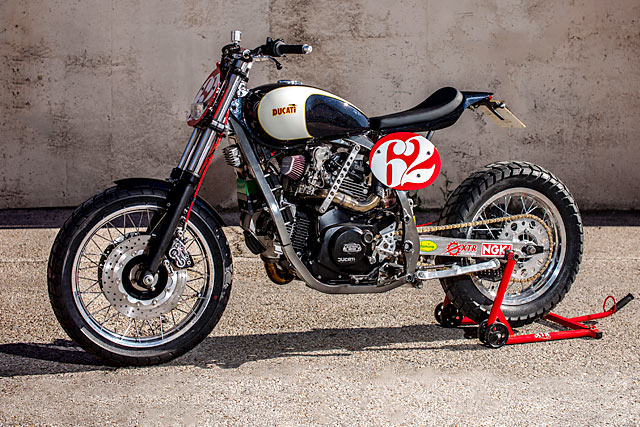 Over the past eight years, Pipeburn has brought you bikes from all over the world and from every manufacturer you care to name. There’s even some I’d never even heard of. But as it happens, a custom Cagiva had never landed in our net. They are an Italian manufacturer with quite an important story to tell. Thankfully we’ve snagged a big one, and it comes from a man with a rare gift of taking any bike at all and building an absolute beast. From the incredible Pepo Rosell of XTR Pepo, here’s an ’86 Cagiva Elefant 350 Dirt Tracker that goes by the name ‘Chico Malo.’ 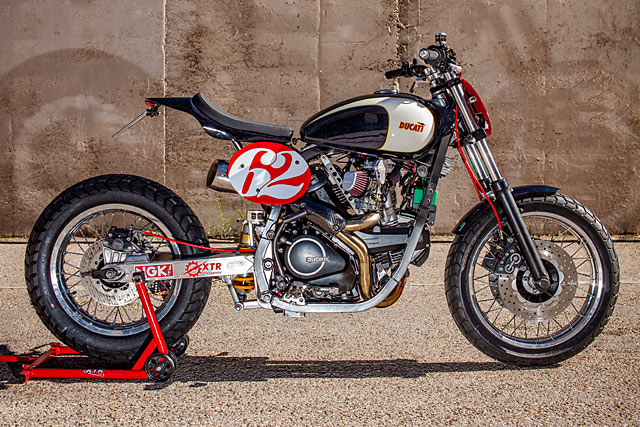 Cagiva has had an incredible history, having owned some of the most illustrious of brands for periods of time, including Ducati, Husqvarna and MV Agusta. Racing has always been at the heart of the operation with multiple wins in the glory years of the Paris-Dakar, GP success in the 2-stroke 500cc days and even World Motocross titles. But in recent years the brand has slowly fallen apart, which as it would happen is just how Pepo found this particular example. In a barn some 100 kilometres out of his base in Madrid, this 350 had long ago lent up against the wall and died. 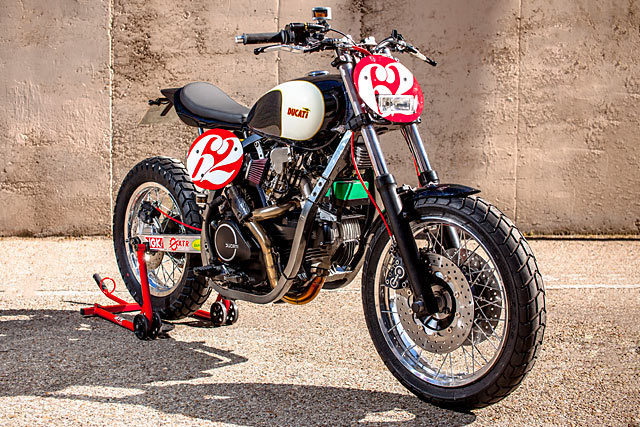 But its barebones were all that the genius that is Pepo Rosell needed to craft this little Italian bad boy. Knowing the huge changes he had in store Pepo took the bike back to a bare frame and stripped every component down. The frame itself has been modified for the new tank and subframe, while the swingarm and engine supports were heavily polished before being bolted back on. The subframe is one of XTR’s beautiful hand rolled round bar items for total simplicity and maximum weight saving. Even the side stand and linkages got some re-working and a polish before going back on. 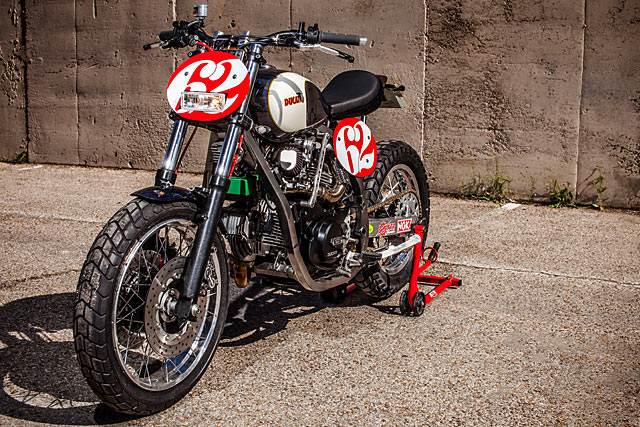 Sitting on top of the new frame is a modified Mash 125 gas tank which is a huge stylistic improvement from the stock plastic item. None of the factory off-road plastics have survived with the side covers now coming in the form of race plates; a regular sight on XTR builds. While out back a beautifully sculpted tracker seat sits on the custom frame and along with the upholstery is more of Pepo’s handiwork. To catch the eye as he whizzes by the Pintumoto paint is a base black with copious amounts of rainbow flake. It’s neatly broken up on the tank thanks to classic cream-white, although period correct Ducati emblems mean guessing this was ever a Cagiva is a purists only pursuit! 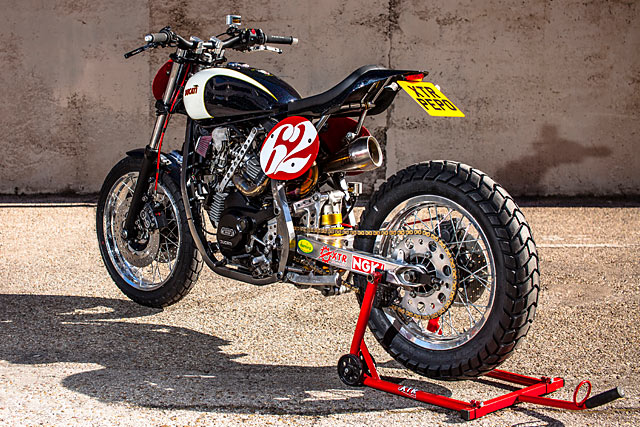 The Elefant now totally devoid of its Adventure bike appearance, Pepo got down to making the old dune jumper into a sideways slider. The stock forks are in the bin and the whole front end has been replaced with a BMW R100R setup. Lowered through the trees the beefy CNC’d risers hold a set of theme fitting Vicma Conical handlebars. A Honda CBR 900 master cylinder sits on one side of the bars with a Suzuki GSX-R 600 clutch unit on the other. Both have custom folding adjustable levers with Rizoma providing the brake fluid reservoirs front and rear. 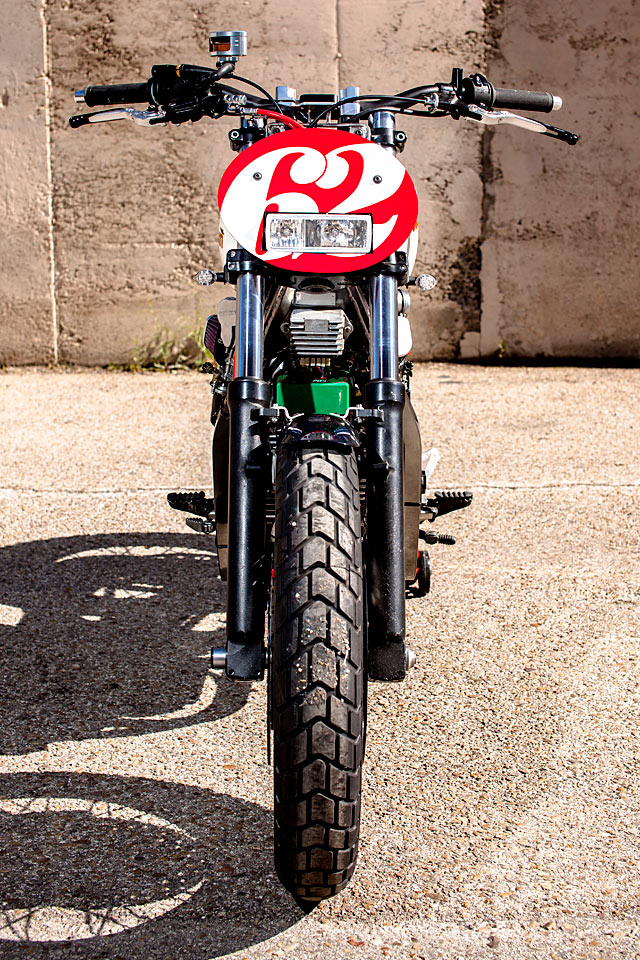 To finish out the brake package Pepo replaced the discs front and rear with drilled Brembo items. The calipers also come courtesy of the big B and Fren Tubo brake lines in a braided red pattern send the power. With the handling and braking package now near perfect the XTR wizard needed a way to transform the sloppy rear end. The solution comes with a custom shortened Ohlins rear shock, the perfect way to dial in those sideways slides! Getting the arse end to hang out is made that much easier thanks to a Domino quick action throttle and grips. 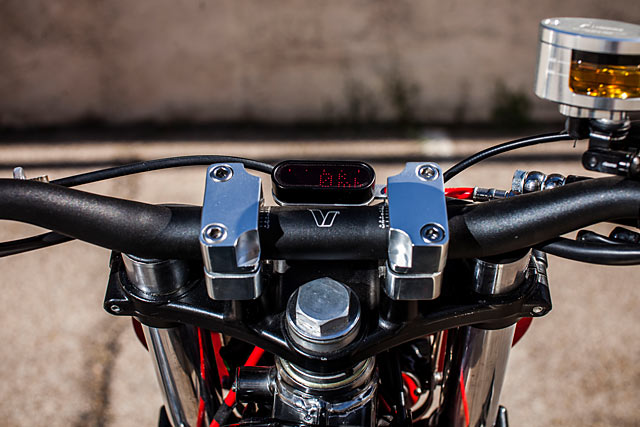 All the while Pepo was working on the incredible rolling chassis he had the Ducati Pantah engine, stock in the Elefant, sitting up on the bench. He had big plans for the little 350cc L-Twin donk and that begins by more than doubling the swept capacity! Thankfully the Pantah engines had been offered in capacities up to 750cc giving Pepo an idea on specs. But taking a 350cc unit out to seven fiddy is a don’t try this at home kids operation. The big bore motor has worked heads for increased flow and compression. Surely assembling such an incredible short block was hard; Pepo replies simply “It wasn’t”. 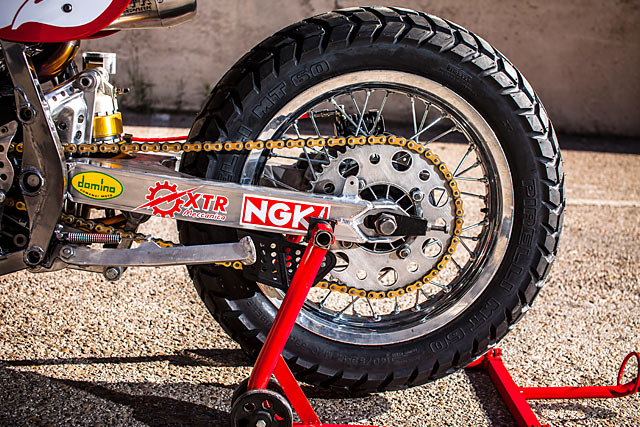 We really are not worthy, but he wasn’t finished there. To get enough fuel into the pots the stock Italian carbs have been replaced with twin Keihin FCR 38 flat slide units sucking air through DNA filters. These would literally drown the stock spark so a Silent Hetkit CDI based electronic ignition kit is fitted and with 16 maps provides exceptional fine tuning. With such a confined space in which to work making an exhaust system was no easy task. But again Pepo makes the magnificent look easy with his Super Mario 2 into 1 exhaust system with a SPARK megaphone muffler. To hear it come to life you can either give the kick starter a boot or thumb the electric starter thanks to Triumph and Leonelli switch block combo. These also control the XTR LED rear light that sits on a Pepo hand-made number plate holder. There are XTR LED blinkers to keep the fuzz happy and an XTR front light pokes through the final race plate in proper Dirt Tracker for the road style. A Motogadget motoscope mini gives all the information you’d want to be looking at while hanging onto this bucking beast. 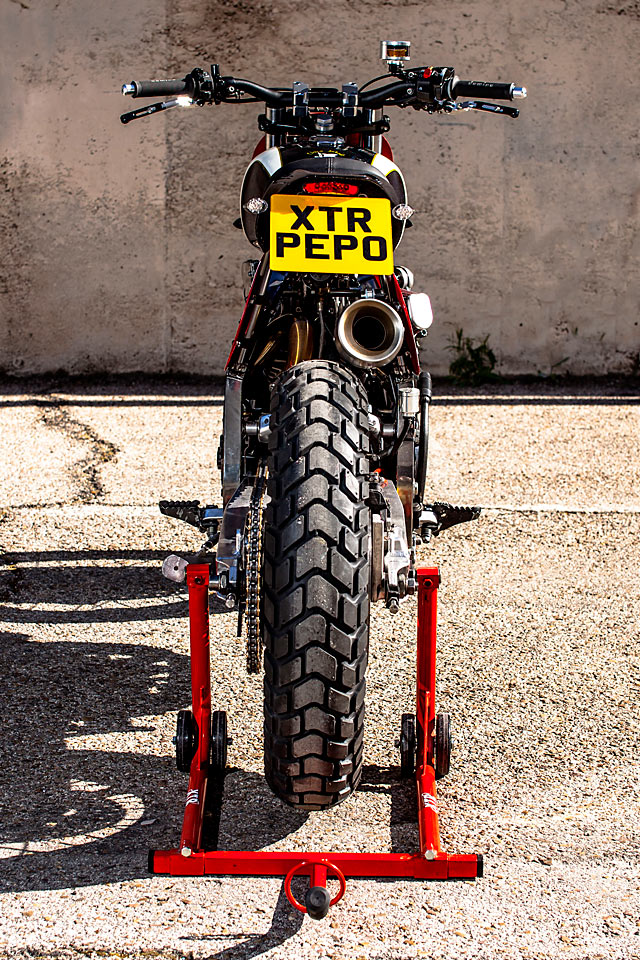 Finally a LIPO battery provides the cranking amps to turn over the big L-Twin and we soon discover the hardest part of this incredible build. As the man himself explains it’s the one area that always provides headaches on such bikes “as always it was to design and make all the electrical wiring fit it in such a little space,” At least we finally know that Pepo is human! So with all the hard work done, fuel in and ignition lit, what’s she like? “To ride the bike is so funny, because it really is a Chico Malo (Bad Boy).” A slow overland Elefant is now a little dirty rascal with attitude to boot and what a way to witness our first Cagiva build. 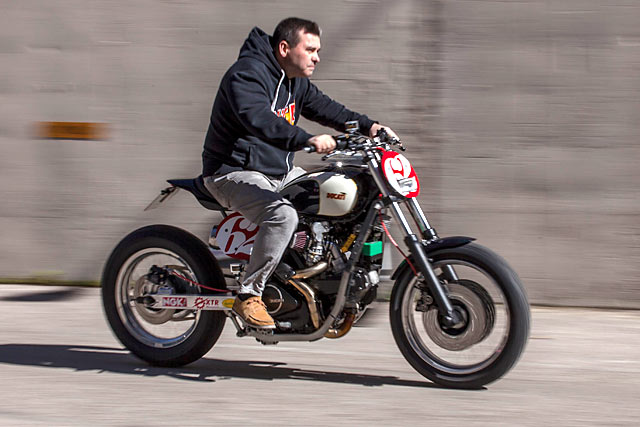