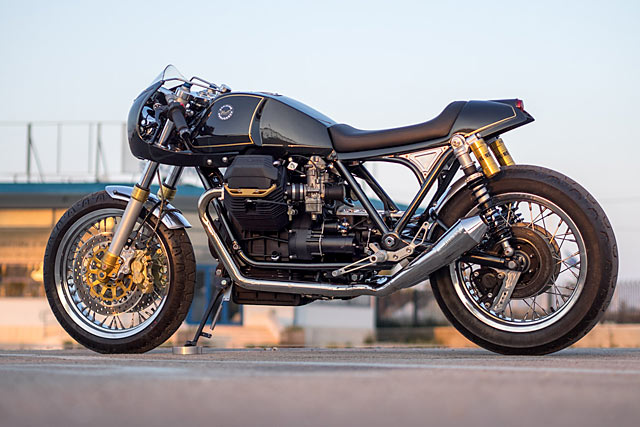 In recent times it has become all too common a cliché to call a custom motorcycle of a certain quality, a rolling piece of art. It’s not that many of these machines don’t deserve the title and I’d personally take a Max Hazan over an Auguste Rodin any day. But where most art is enjoyed as the finished product, custom bikes are often built by or with considerable input from the prospective owner. From Picasso to Pink Floyd they didn’t sit around with their would be consumers of their work and take input, they simply created. But there was a time, many centuries ago, when the well to do would commission works from their favourite artists and wait for the surprise of the great unveiling. This is the story of such a creation, VITALIS 850 by Filippo Barbacane of Officine Rossopuro, using a Moto Guzzi 850 Le Mans as the canvas. 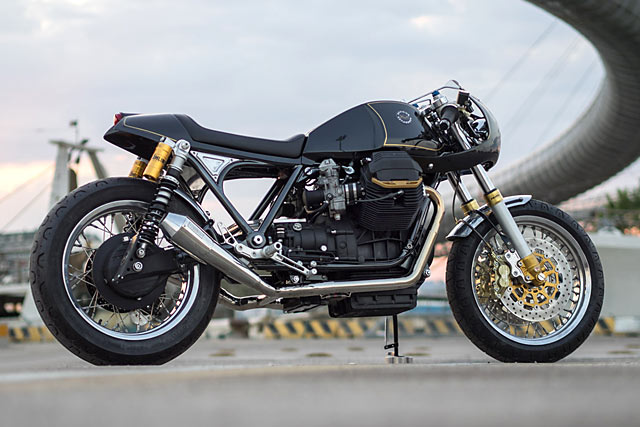 Readers of Pipeburn will be very familiar with the work of Filippo who plies his trade from a small workshop Abruzzo, Italy. In fact the very last time we featured one of his builds, Ritmo Veloce, we spoke of how such bikes speak a universal language that all Moto Guzzi fans understand. Well it seems those words crossed the Atlantic as the owner of this gorgeous machine called the Officine Rossopuro shop from San Francisco to place an order and gave Filippo absolute carte blanche as to what he should deliver. 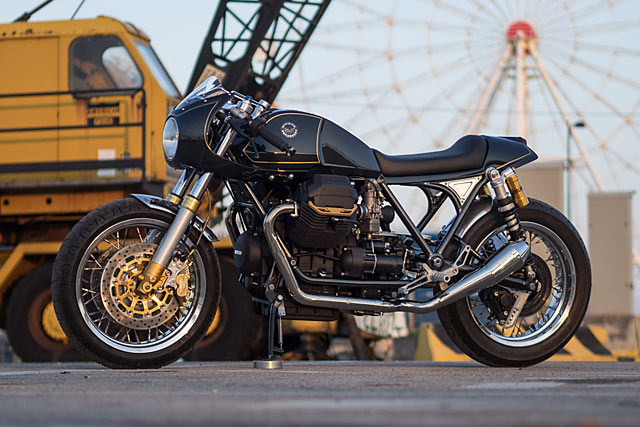 To give himself a base with which to work Barbacane found an early eighties Moto Guzzi Le Mans Mk III but it is the name that would dictate the purpose behind the creation. “Vitalis is a Latin word, its meaning is “necessary”, “vital”, in short, a wild thing without which you cannot live. This is motorcycling for me, one thing without which you cannot live. A motorcycle is not just an object, because it is able to communicate emotions, to make you feel joy, pain, anxiety and fear, as a person, as a living life,” expounds a gesticulating Filippo. 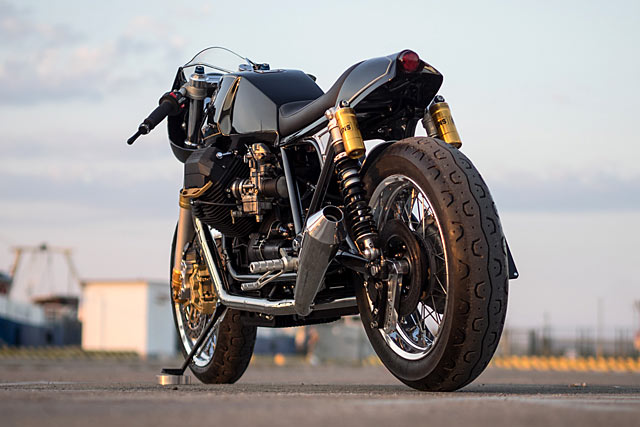 The Le Mans MkIII was a perfect selection with which to work, with the US clean air regulations choking the life out of motorcycling for a period, Guzzi simply refused to play by the rules. The MkIII was a no compromise machine with big power, a gorgeous Tonti frame and unapologetically Italian styling. If it had a flaw it was weight and immediately Filippo set about bringing this number down! The entire rear section of the frame from directly behind the engine has been cut off and a new rear end engineered. This allowed for the use of modern, lightweight materials to reconstruct the now narrower and more aggressive sub frame. 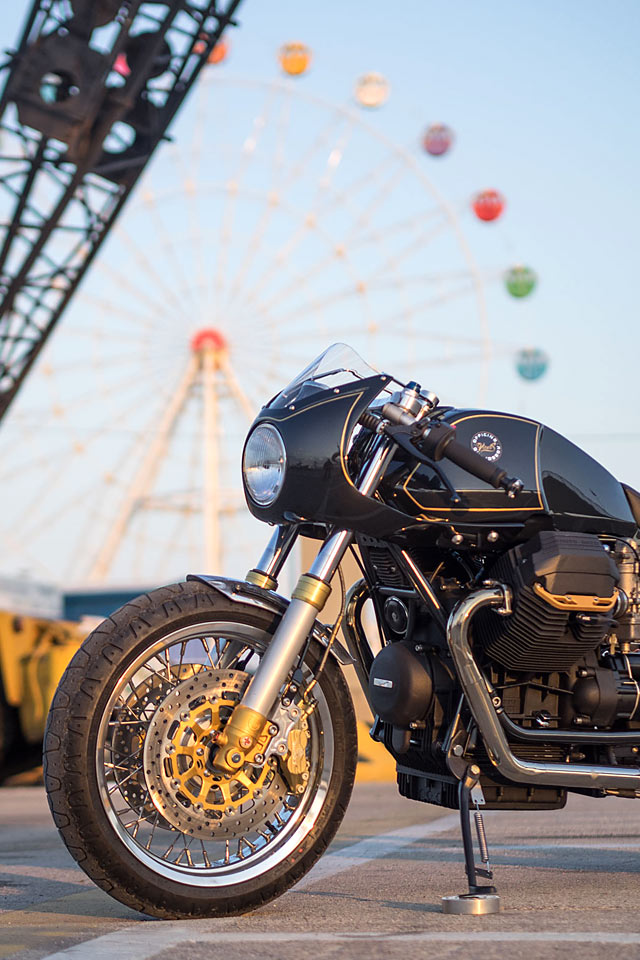 To visually display this weight loss program the lower frame tubes have been stripped of all components to articulate a more slender skeleton. To further remove weight while adding increased rigidity Filippo machined the gussets, engine mounts and bracing from lightweight 7075 aluminium alloy. Having shaved many a kilogram off the dry weight, efforts went the extra mile to save even grams. The adjustable rearsets are machined in-house from alloy replacing the steel components, so too the shock mounts. While the big factory front guard has been ditched for a hand rolled item with custom mounts.

When it came time for the body work Filippo had a clear image in his mind. “The line would be modern and retro at the same time, the basic idea was to have a fairing but that was not a windshield of a full fairing but something different, a middle ground.” He’s hit it out of the park, with each piece hand beaten, the fairing as if old and new collide with ’70s styling and modern miniature bubble screen. The tank is another master class in metal fabrication with absolutely flawless lines, while the tail sections inverted V styling shows off plenty of rear tyre. 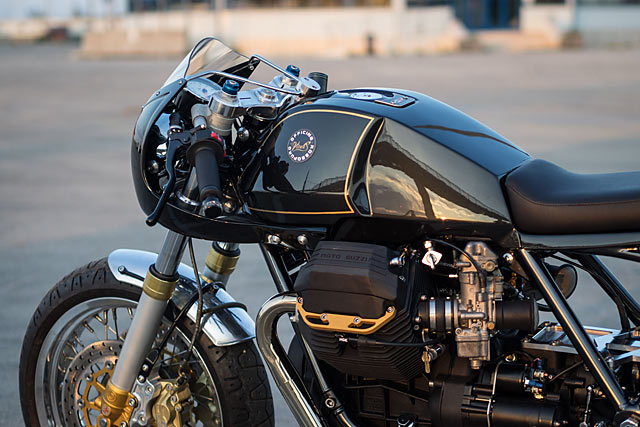 The subtle touches are just as good. The way in which the taillight is frenched into the rear is perfection personified, as is the fairing mounts and metal work that caresses the edge of the filler cap. All of which is covered in another subtle paint job that is a trade mark of Officine Rossopuro, with the colour palette never over powering the craftsmanship. The pinstriping simply accentuates each line, while the leather seat provides plenty of comfort for the rider without interfering in the purity of the design. 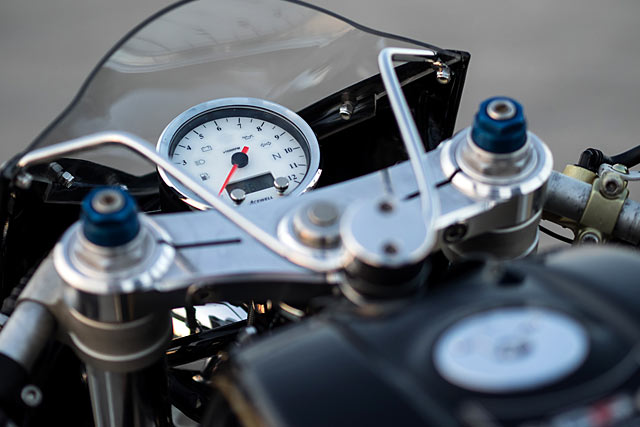 But at the heart of any Moto Guzzi is that beautiful V-Twin and Filippo has made sure this 844cc lump is in better condition than the day it left the factory. A full overhaul was carried out on the 2 valve motor that with its Dell’Orto carbs properly tuned pumps out an effortless 80-odd horsepower. More power comes thanks to the beautiful stainless pipes that follow the lines of the frame and end out in a pair of Mass Exhaust cans designed specifically for the project. While the engine itself was treated to a lashing of heat proof paint, matching velocity stacks and Filippo’s own machined head guards in pinstripe matching gold. 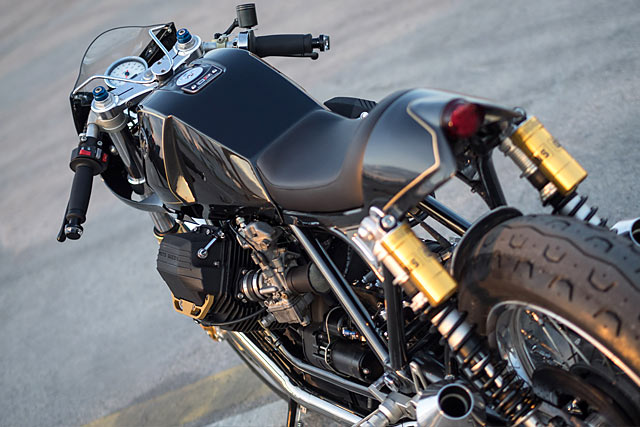 To bring the suspension up to scratch the thirty year old 35mm factory forks have been changed out for a set of beefy 45mm Paioli racing items. Rather than mess around with trying to find triple clamps to match, a brand new set was purpose made up for the job, CNC’d from high-grade aluminium. Down on the lower legs a set of 320 mm Brembo drilled discs and multi piston calipers take the braking from good to unbelievable. While having re-designed the rear end of the bike new shocks were called for and a bike of this quality deserves only one brand. Ohlins. 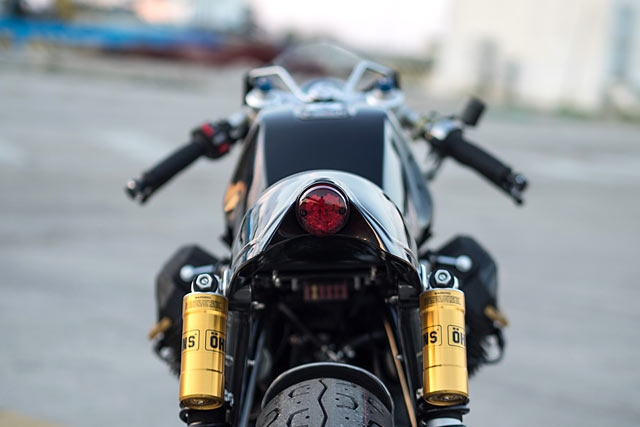 With the ugly factory mag wheels never an option, Filippo wanted to go down the spoked route but with a little extra twist. Being a shaft drive, simply picking something else up from the scrap yard isn’t an option, so custom-made 17″ rims front and rear get the job. Designed to allow for the running of modern tubeless tyres, work was also carried out to allow for a big 160 section rear to add some visual muscle. Filippo braced the swingarm with another of his own CNC machined parts and fitted up the Pirelli Phantom rubber.

“With the ugly factory mag wheels never an option, Filippo wanted to go down the spoked route but with a little extra twist.” 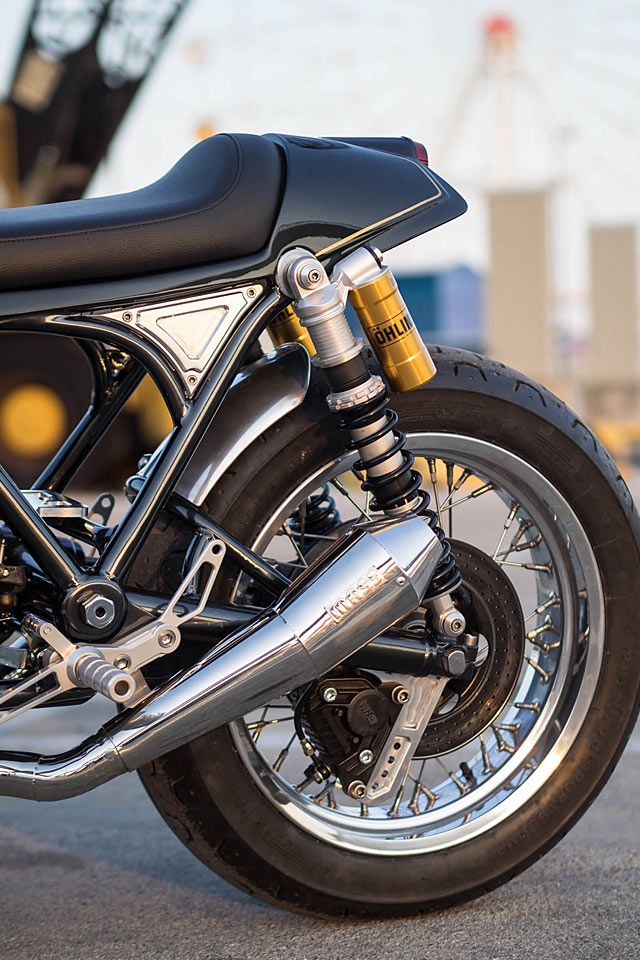 The finishing touches were all about making sure the bike would be road legal for the California customer without doing anything to disturb the visual majesty. An all new wiring loom and modern switchblocks ensure a clean finish with modern reliability. While the single Acewell instrument and bar end indicators keep the fuzz happy when out on a sunny Sunday blast. It’s almost impossible to find words to sum up such a flawless creation but it’s easy to believe once an art work like VITALIS is part of your collection, who would ever want to live without it.