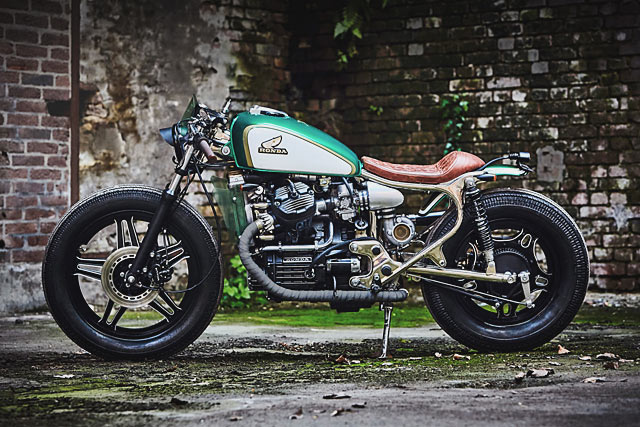 Consider the humble Honda CX. If ever the Honda Motor Corporation made a bike that perfectly summed up the company and its ethos, this would be it. Impeccably engineered, virtually indestructible and just a little bit dull. In Germany, they call it a ‘Schlammpumpe’ or ‘Slurry Pump’. In English, ‘The Plastic Maggot’. They say that after a nuclear war, the only creatures to survive will be the cockroaches. Well, we’re here to tell you that they’ll all be riding CXs. And one very, very lucky German Cockroach will be rocking this turbo’d bad boy from Essen’s Kingston Customs. 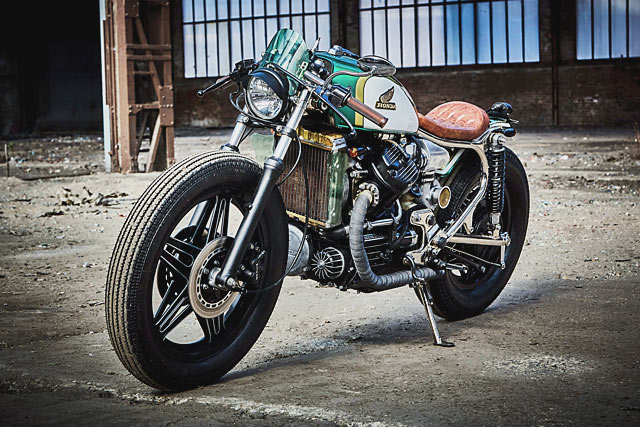 “Kingston Custom bikes always get a new identity”, says owner Dirk Oehlerking, “They get a new style with as much charm and character as I can give them. And the Honda CX500 is ideal for redesigning and rebuilding; especially for cafe racers, scramblers or flat trackers”.

After Dirk’s recent Honda CX 500 cafe, he was looking for a new challenge to give himself. And with his forced induction track record that includes a BMW with a Porsche turbo and his ‘White Phantom’ turbo R80RT, only a sociopath wouldn’t be excited at seeing what he has in store. The answer is this. 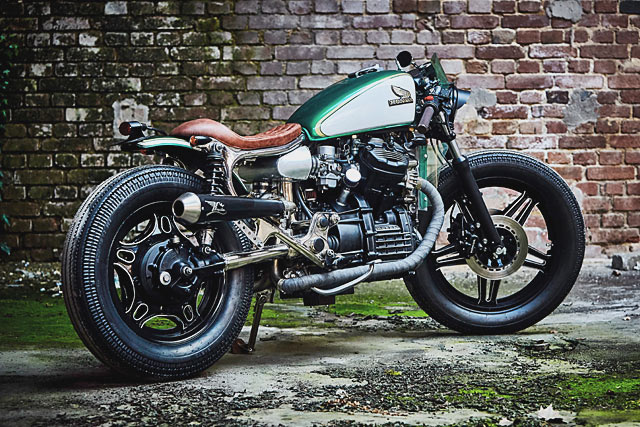 “Everyone knows the Honda CX500”, smiles Dirk. “People do make fun of it, but many also talk about it lovingly and with a lot of enthusiasm in their voices. Me included. And when you know just how good they can look when customised. Who would have thought the old ‘slurry pump’ could be such a rocket!” 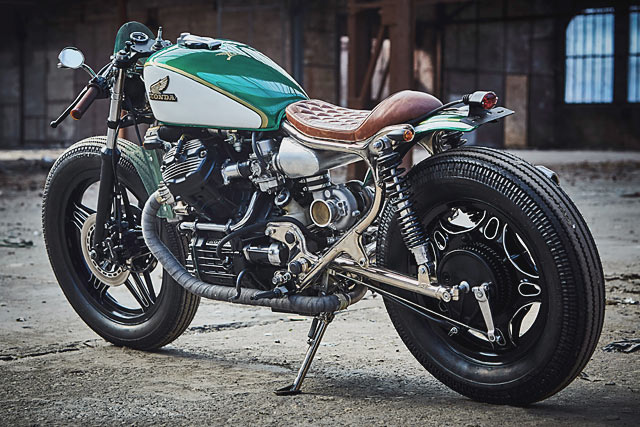 We talked recently about responsible builders stripping engines to ensure the bike they built was reliable. I’d now like to add an exemption to the rule; the CX Honda’s v-twin. “The Honda has a beautiful v-engine, which is incredibly reliable even after 35 years of service. I’ll always guarantee them without hesitation – even after I’ve added a turbo. This motorcycle with this engine will live forever”.

“The CX has been rebuilt by many customisers, but none that I know of have a used a turbocharger. So I am building a special Kingston bike: the Kingston Honda CX 500 CT, or Cafe Turbo”. ‘Cafe Turbo’. We like the sound of that. 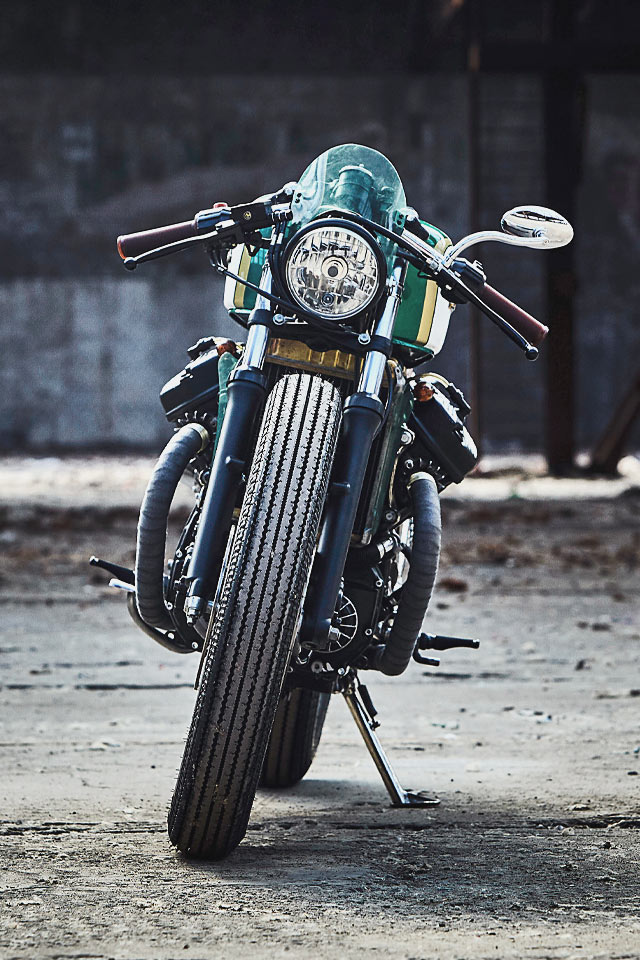 “Despite the bullet-proof engine, I still went for a full rebuild. Every single part of the bike goes through my hands and is tested, machined, altered or re-manufactured. The engine was completely disassembled and modified for reliable turbocharger operation. The compression ratio has been adapted, the carburettors were modified for blow-through operation and the turbocharger was plumbed with its own oil supply. I have also welded a second petcock into the tank to allow for the fuel return”. 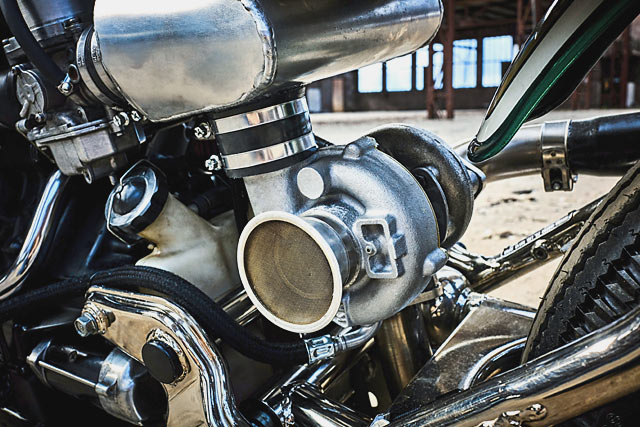 The pressure regulator and the petrol pump were placed under the tank. Dirk’s goal was to keep everything super clean so that the turbocharger with its aluminum air box nestled in the rear frame is perfectly presented. Job done, then. The bike’s frame was then stripped, polished and completely nickel-plated. 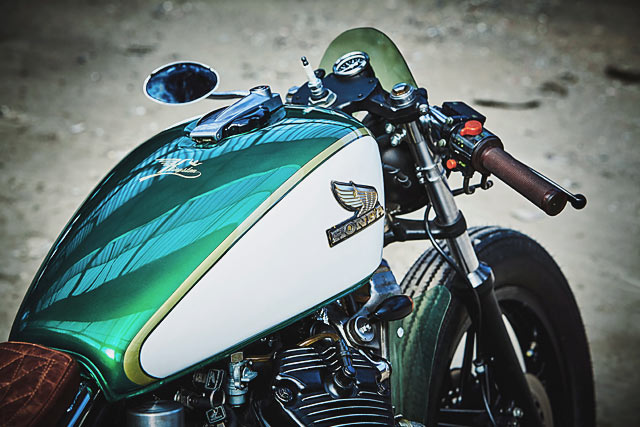 The cafe racer was then equipped with a bespoke seat and battery box, a matt black reverse cone pipe was high-mounted for the turbo’s output and the front fender was shortened and switched to the rear. Cue the furious anger from the fender police, but if you ask us it looks amazing. 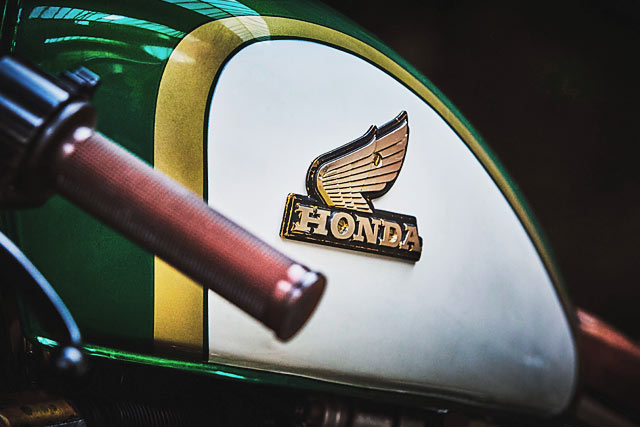 Final tweaks included Spiegler steel braided brake cables, a Bates-style headlight and some Shinco Tires. Out back there’s 5.00-16s and up front you’ll find 4.00-19s. And as for the all important turbocharger, it’s a Borg Warner K24 running at 0.9 bar that’s boosted the Honda’s power to 75hp at 8000 rpm with 78 Nm of torque. That’s not bad considering Honda only managed 82hp from their own CX500 Turbo. 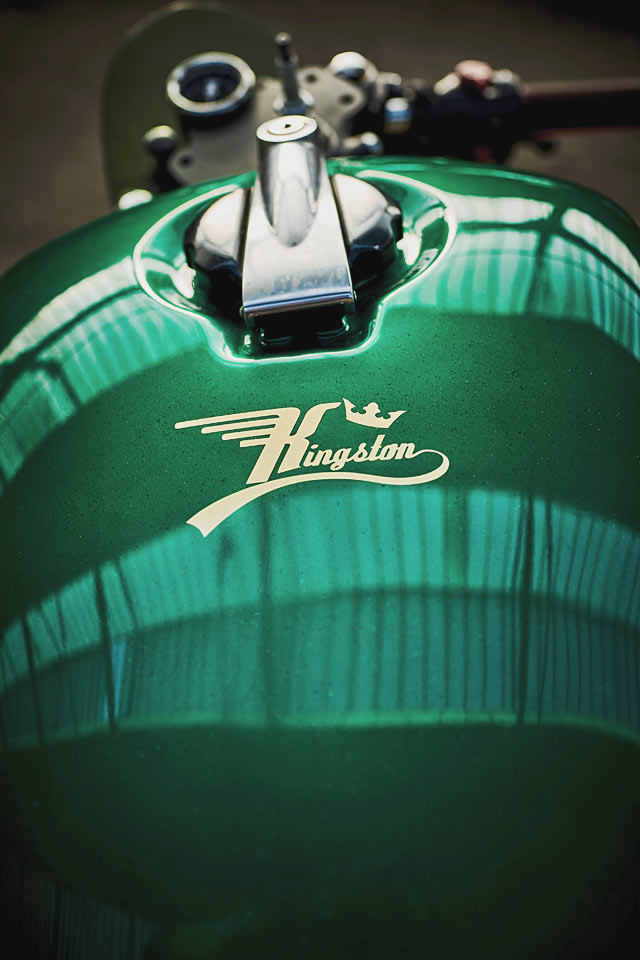 So the cool photos are all fine and dandy, but the real icing on the cake was seeing the bike in the flesh at the 2017 Wheels & Waves show. Trust us when we say that the Honda looked (and sounded) even better in real life. And meeting the man himself after 5 years of email-only communications was pretty damn cool as well. We can’t wait to see what his turbo-obsessed brain makes next. 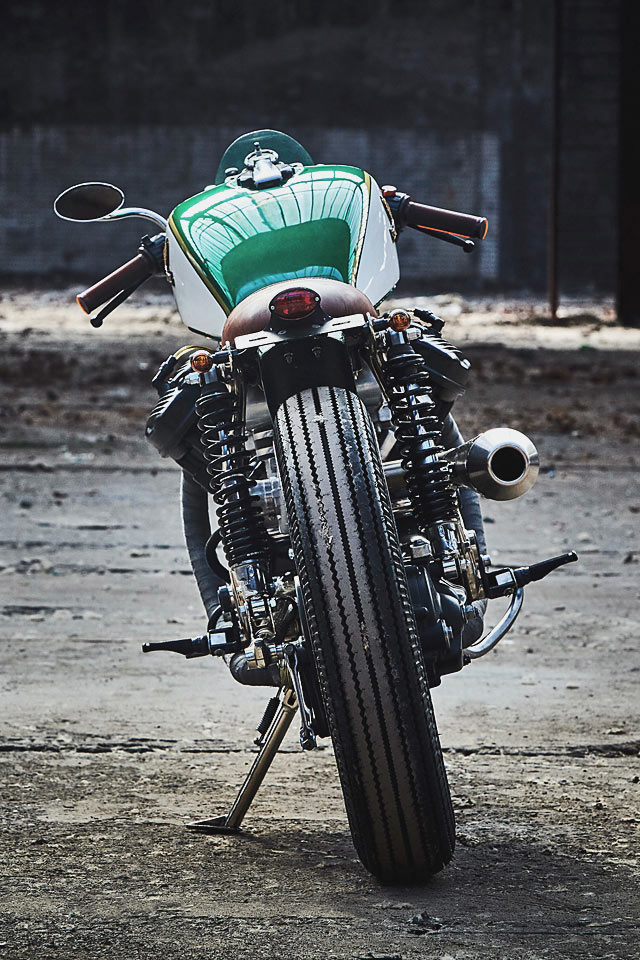 Anyone else have an overwhelming urge to clean the tread?