SNAP TO IT. Meet The ‘Arm Breaker’ Yamaha XJR1300 By France’s Bad Winners 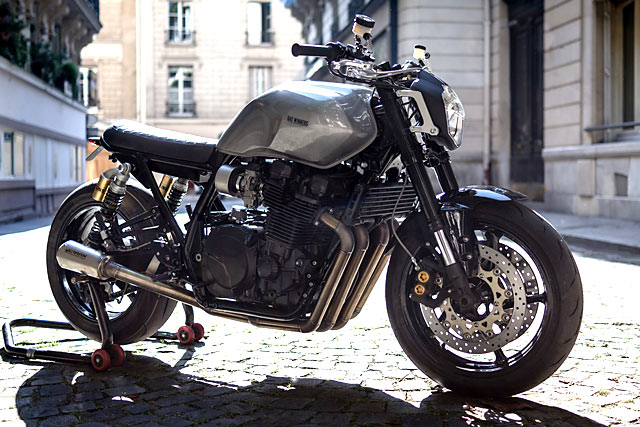 Walk into any gym around the world these days and there’ll be a line up for the mirror as jacked up shirtless individuals get the perfect selfie for Instagram. But over in the distant corner, large but unassuming, is a big man who comes in everyday and gets the job done without a fuss. Imposing, all natural and capable of benching more weight than the rest of the posers could ever dream of. In the motorcycle world that individual is the Yamaha XJR1300 that still relies on classic looks and a big cube air-cooled engine to fill an important niche in the company’s line up. But Walid from Bad Winners in France decided it was time to show the juice heads what real muscle is all about and has turned this 2005 example into a brutal beast he calls The Arm Breaker. 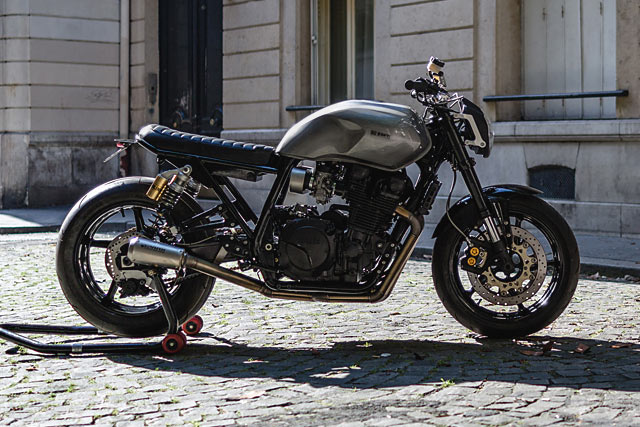 Based in the eastern suburbs of Paris, Bad Winners has become an exceptionally successful custom shop since it was founded just six years ago. Already with three custom series of motorcycles that customers can choose from, plus one-off builds, there is little down time for head honcho Walid. Currently he’s got 14 customer bikes in the works that need to be completed while also working on his own machine for the 2018 AMD World Championship. But for a man who started fixing motorcycles at the age of seven in his cousin’s garage it’s all in a day’s work and he’s never flustered. 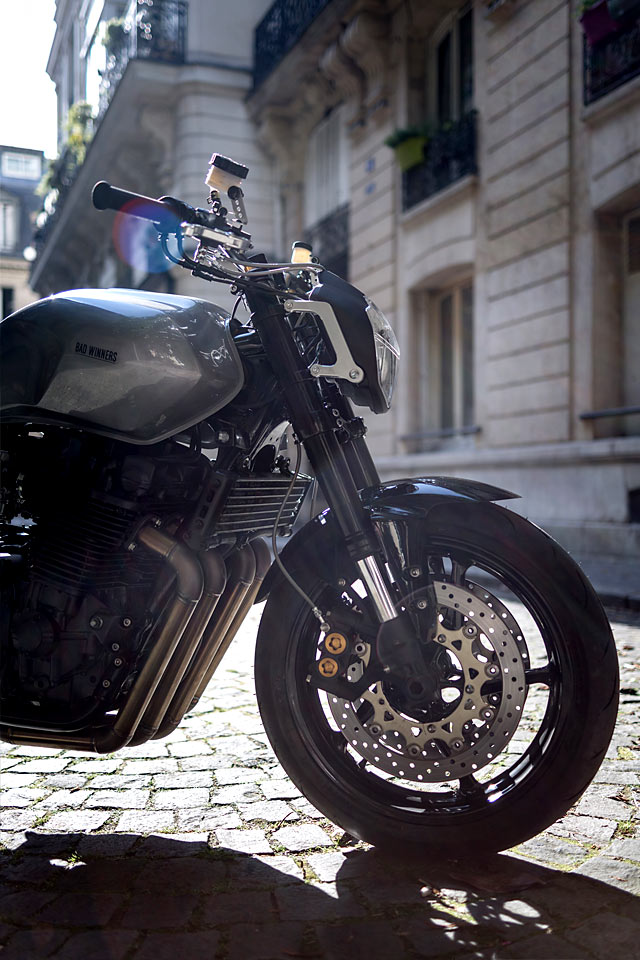 So when a customer came to him with this 2005 Yamaha XJR1300 in what can only be described as terrible condition the unflappable Frenchman knew exactly how to handle the build! Sleek and clean looks were the order of the day, a bike that could still be ridden two up and then the show piece. That big block 4 cylinder engine would get bulked up in a big way giving his customer a chance to really flex in the traffic light grand prix. But given the state of the bike that came to him Walid first he needed to strip it down to the frame for a full inspection. 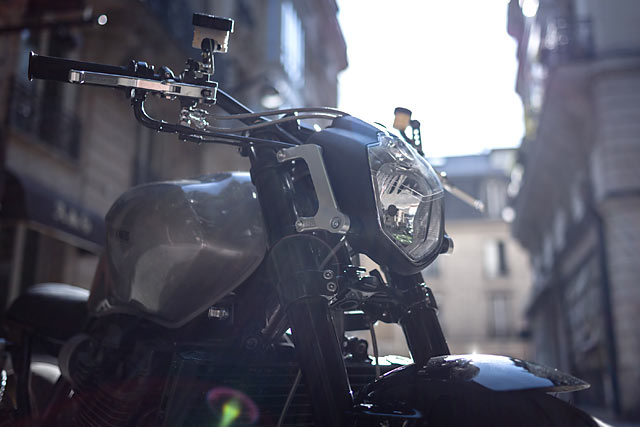 “When I started this project, the first thing was to open the engine completely as the owner didn’t take care of his bike for a long time,” explains Walid. So with the engine on the bench and now with a perfect excuse to go crazy on its rebuild he first focussed his attention on giving the XJR the looks the motor to come deserved. All the plastic tail pieces, side covers and extra gubbins were removed and the frame smoothed out. With grinder in hand the subframe was taken off before a new tubular steel piece was created with an up-kicked hoop and the whole chassis given a fresh coat of black paint. 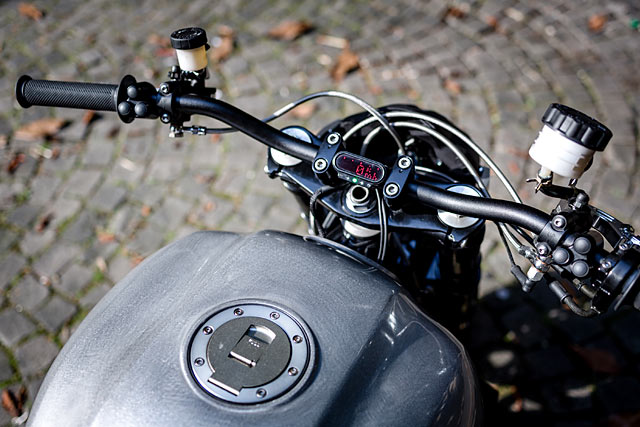 Up top a perfectly shaped and stitched leather seat halves the size of the original while still allowing for comfortable two up riding. Underneath the seat Walid fabricated a lightweight box to store the electrics and other vital components in without disturbing the clean lines. The engine, swingarm and front fender have all be painted frame matching black, there is no razzmatazz here! To keep the street rod look continuing the damaged stock tank has been body worked brilliantly and its millimeter perfect. More than confident in his ability to finish off metal flawlessly there is no colour, just a coat of clear to protect the steel and small Bad Winners logos in black on the sides. 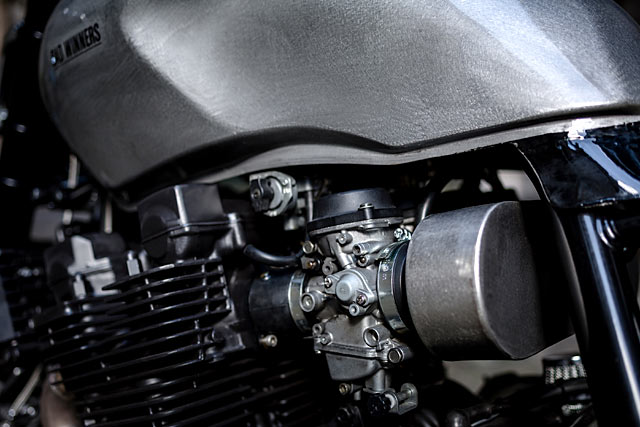 But you can’t have a muscle bike without a torque twisting engine and straight out of the box the 1251cc DOHC Yamaha motor has always been a winner. But Walid wanted much more than that and with the slugs out the engine was bored to take a Wiseco piston kit to bring the swept capacity up to 1390cc. A full stainless exhaust system purges the waste with a howling Spark exhaust technology end can for that GP look. To help evenly fill the cylinders there’s a fabricated airbox to feed the four carburettors. But such a package is no easy thing to tune “it took me ages to find the right set up,” explains Walid. 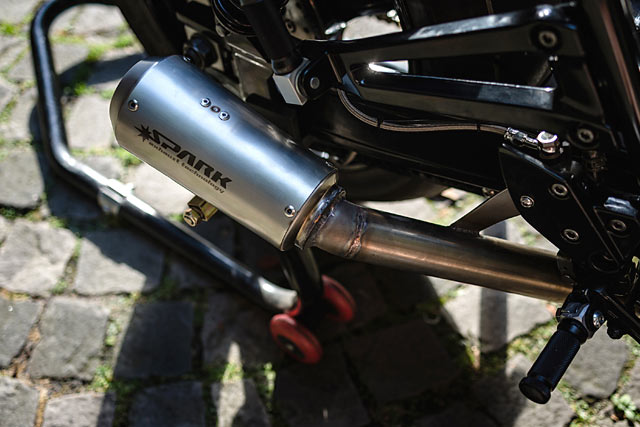 But when he had it right the air-cooled engine was putting out superbike torque figures with a monstrous 132nm of torque and a warp speed inducing 137hp. To get all that power to the ground Yamaha had already ensured the rear end was spot on with a set of fully adjustable Ohlins rear shocks. But the front end was never what it could have been, soft and not providing the level of grip to inspire confidence. So to set things right a full R1 front end has been fitted, USD Kayaba forks, stiff triple trees and all the adjustability required to tune the new outfit to work with the heavier XJR setup. 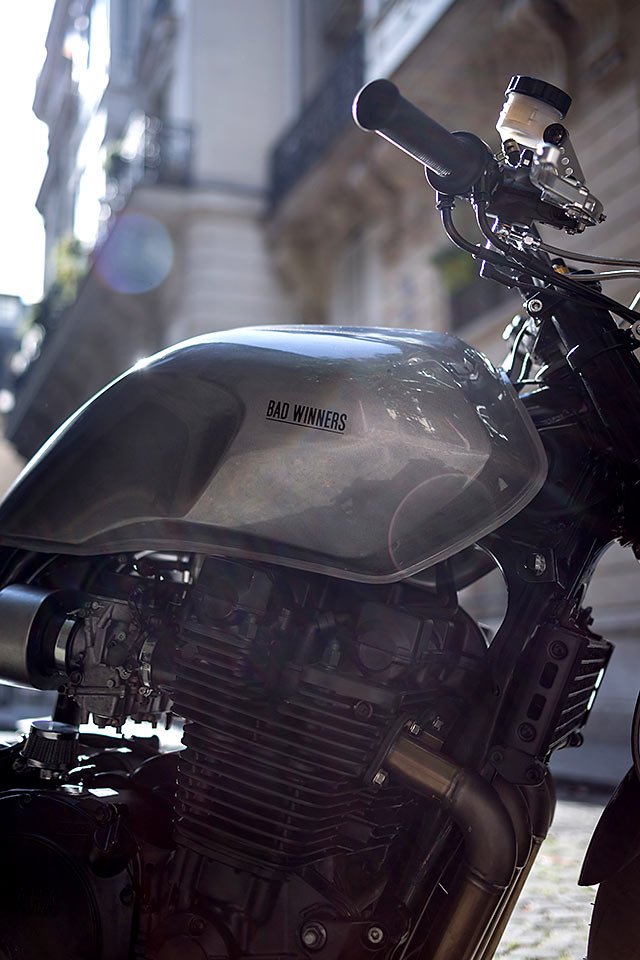 What Walid expected this machine to do was pretty simple, “accelerate fast and brake hard.” So the addition of the R1’s 320mm twin disc rotors up front with four piston calipers is a big improvement both in size and quality over stock. Out back the upgrade required a new caliper mount which was designed and CNC’d in-house for perfect looks and performance. All of which would be a total waste of time if there was no braking force getting to where it’s needed. So an all new radial master cylinder provides the power and the fluid is feed through stainless braided lines all-round. The final step was to bolt up the lighter R1 wheels that were first shod in sticky Bridgestone Battlax rubber. 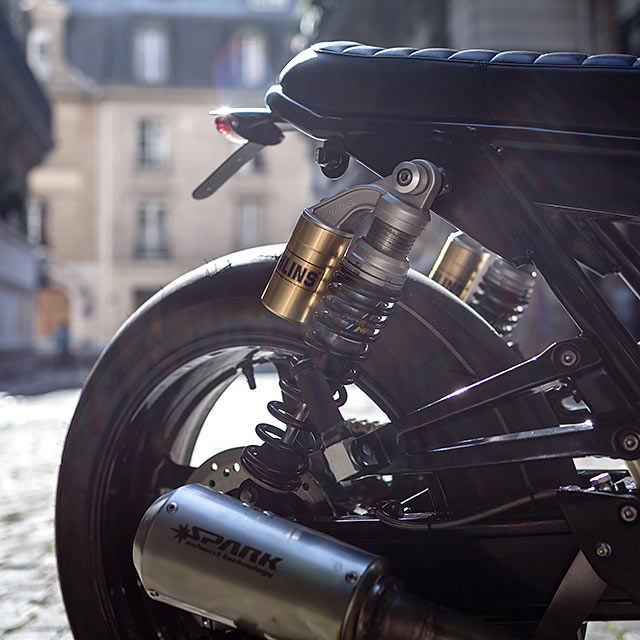 To help maintain the clean and simple look he was after, Walid spared no expense on the Yamaha’s wiring loom, choosing the very best from Motogadget. A small motoscope mini takes over the instrument duties where once a huge twin gauge setup sat. On the bars are three button switches to maintain all the factory features the big XJR has to offer. While giving full control of the monster steed is left to a pair of machined pegs for both rider and pillion and a set of machined levers from aftermarket legends Braking. The headlight brings things closer to 2017 and if Yamaha was to offer a MT13 you get the feeling they’d follow Walid’s lead. 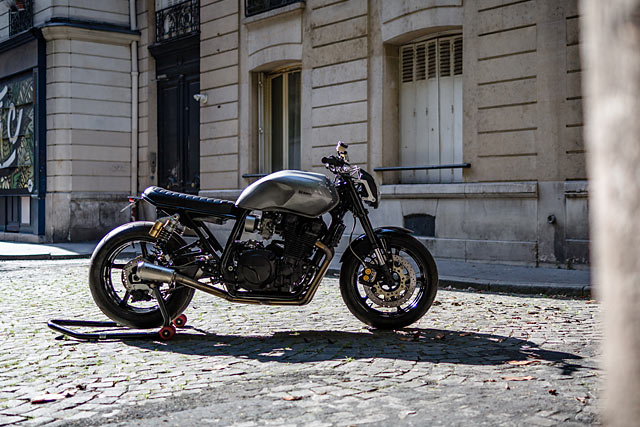 A set of low-rise bars with black grips are as much for hanging onto as they are steering the bike. “I called the bike The Arm Breaker as the torque is insane,” laughs Walid. That’s because the torque figure is not only big, it comes in at incredibly low RPM and pulls all the way through the rev range. White knuckle fever is only a twist of the wrist away and there is a totally different sensation of speed from a machine with so much muscle that never seems to get tired. Now with his own Bad Winners custom to call his own it’s a safe bet that the owner is taking much better care of his Hot Rodded Yamaha XJR when looking after it and especially when riding it.