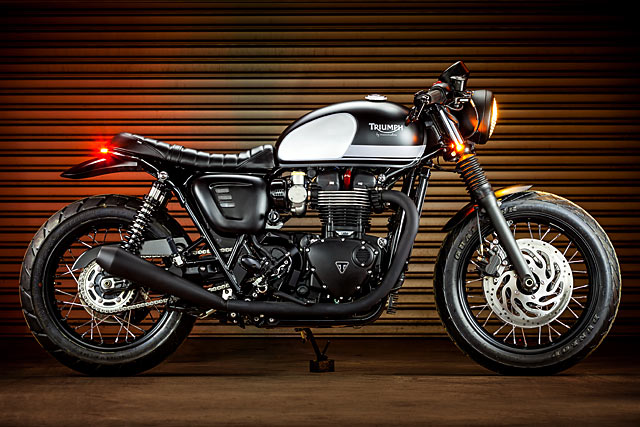 In our review of the new model Triumph T100, we argued that it was in many respects the better bike when compared to its beefier cousin, the T120. Channelling that thought, Macco Motor’s latest build was for a customer that took a T120 over and above a Thruxton when faced with a similar dilemma. Well, that’s if you can use the phrase ‘dilemma’ when the very same customer calls a bike’s lines and style ‘perfect’. Here’s Macco’s ‘Renegade’ Triumph, a classic-looking bike that forced them to start from zero. 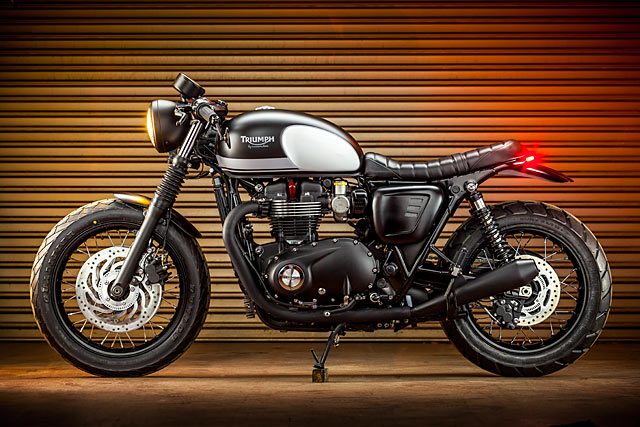 “This is a 2016 Triumph Bonneville T120”, says Jose. “We got it for Nick, our customer who lives in London”. Of course, there’s no jaw-dropping barn find or family heirloom stories here. “We bought it new from our official Triumph dealer,” Jose explains. As you can imagine, if you’ve budgeted to get a shop go nuts on a brand new T120 on your dime, you’re probably not going to be expecting to pick one up dirt cheap on Craigslist. 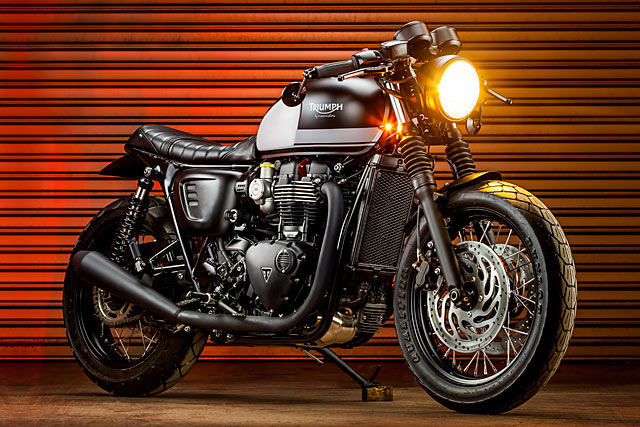 The brief was a cinch. Basically, Nick wanted a black and silver brat cafe bike based on a T120. “Obviously our first question was, “Why not a Thruxton R?” But Nick always wanted the T120 as a donor bike. “He said that he just preferred the T120’s lines and style,” remembers Jose. “In his mind, it was simply the perfect one for him”. 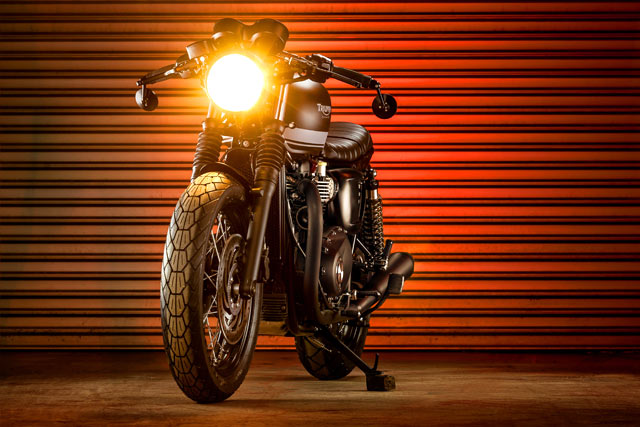 This marks their fourth T120, so now Macco have become very adept at solving some of the problems that totally stumped them when they first built one. “As regular Pipeburn readers might know, we are now quite used to customising Triumph bikes. But when we received this T120 we realised that we needed to start from zero and forget everything we did with the previous models; everything we’d used before just didn’t seem to work with this new frame and the rest of the bike”. 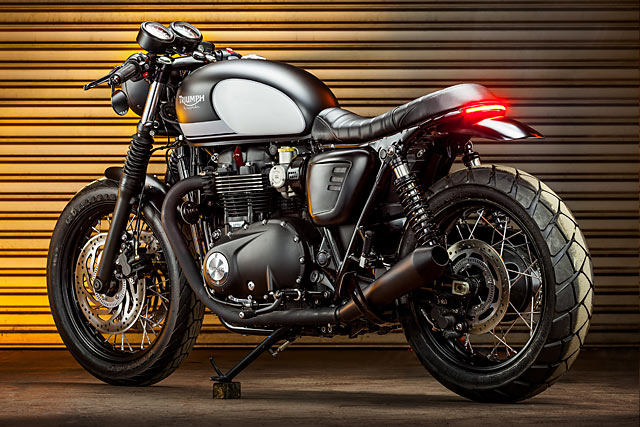 First cab off the rank was to ‘clean’ the front aspects of the bike and attach some clip-ons. “Afterwards, we took off the upper yoke and removed the ignition mount. Now the yoke is super clean and the ignition has been relocated under the seat”. 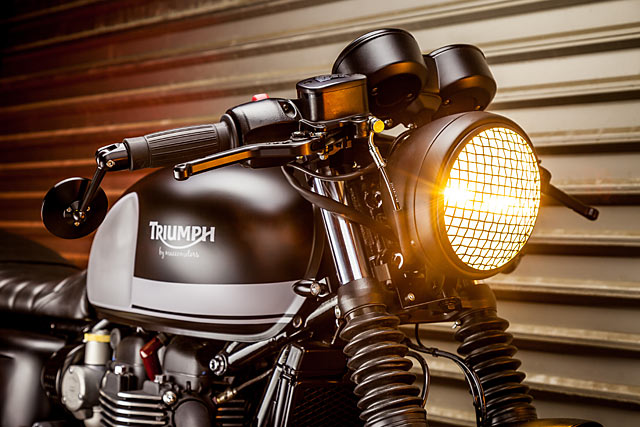 The boys then found a rather cool 6½” grilled headlight that they’d never used before. “We decided to go with it, but it took quite a large amount of mounting tweaks and light modifications before it was sitting exactly where and how we wanted”. 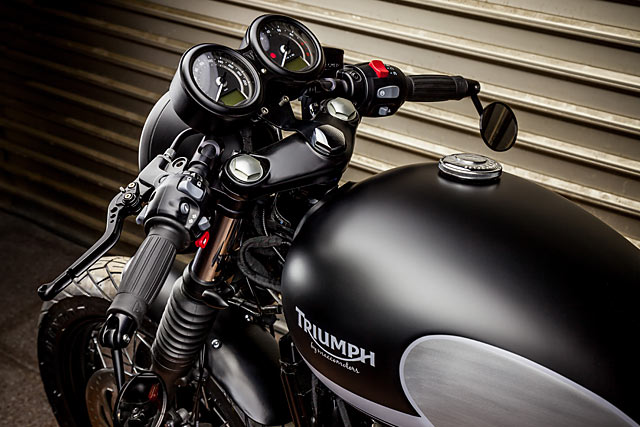 Two new parts were then designed and machined: one to relocate the rectifier closer to the radiator, the other one was the new instruments bracket, sans ignition barrel. For the relocation of the ignition and rectifier, both sets of cables to and from the units had to be extended and hidden accordingly. 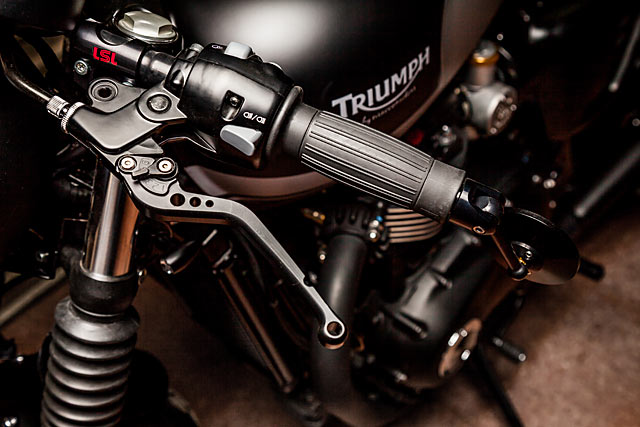 Gear-wise, LSL brackets and clip-ons, racing-style clutch and brake levers, barrel grips and some LSL bar-end mirrors complete the beautifully clean look on the front of the bike. “One of our favorite tire combinations has been used on this build: a 17″ Metzeler Tourance rear and an 18″ Dunlop F20 front”. And much to the ‘Fender Fanatics Club’ undoubtedly vocal approvals, front and rear fibreglass mudguards have been built especially for this project. 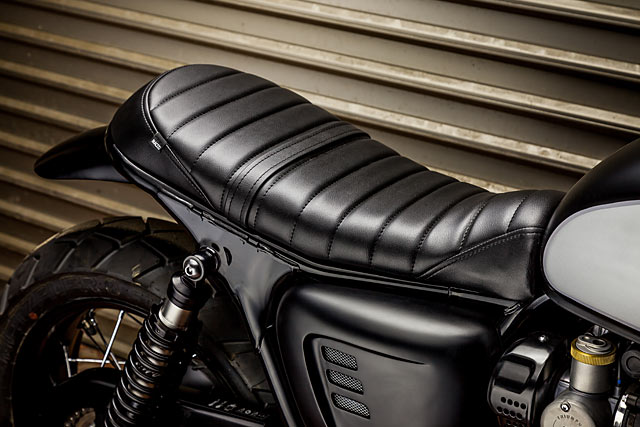 “Then we moved our attention to the rear of the cafe brat. Of course, the frame’s shape is different to the previous models’ too. So we built a new loop and steel seat base to suit and in the loop we included a new set of combo LED tail light and turn signals”. The classic look of the British Customs Predator exhausts, Rizoma sprocket cover and Macco Motors side panels perfectly complete the look. 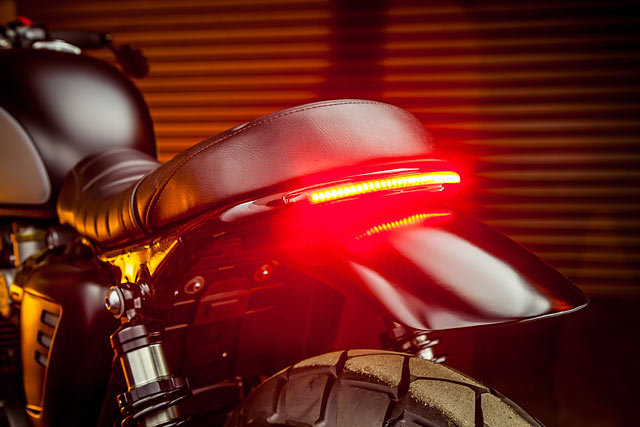 In retrospect, the hardest part was finding the right places to relocate the rectifier and ignition. “When we first talked to Nick, we were considering the possibility of hiding the instruments’ electronics but when a customer chooses a Triumph T120, chances are they are also looking for the bike’s newer features, such as ABS or riding modes. So we just left the instruments in the front and managed as best we could”.

“What we like most now that the Triumph is finished is the combinations of both classic and muscle looks that it has. It’s something we really like and that we’ll definitely look at exploring more in the future”. 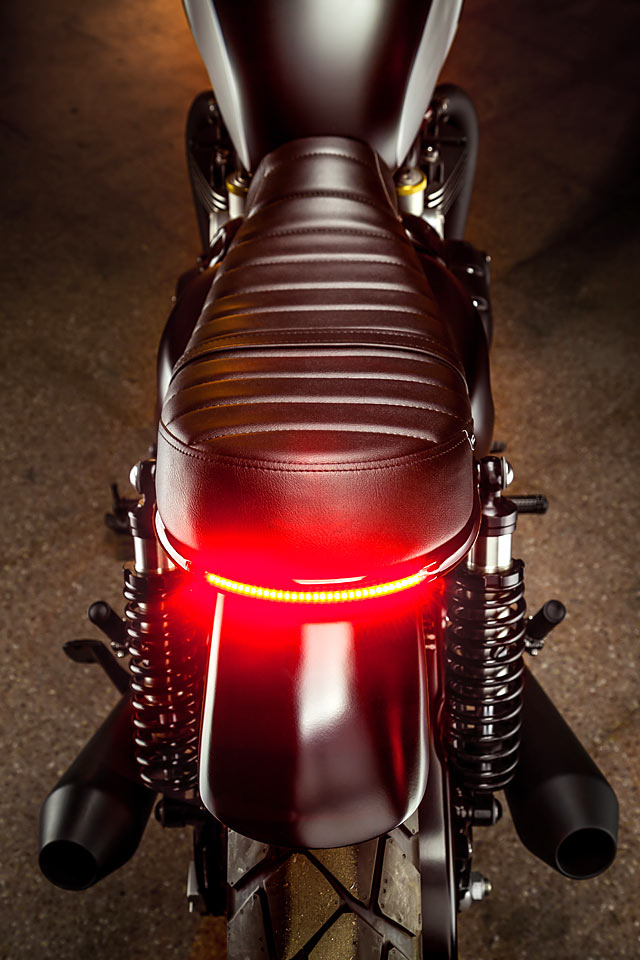