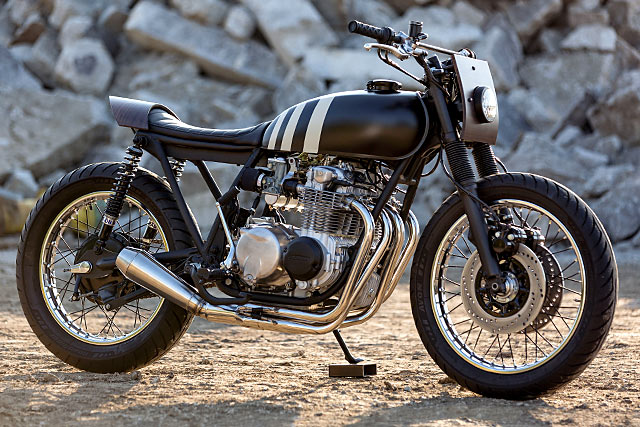 For a professional furniture maker like Monnom’s Mike Gustafson, using wood on a daily basis is a necessity. But when he swaps hats to his role as a custom bike builder, the exact opposite is true. That’s because using wood on custom bikes is damn tricky at the best of times and in many cases it can look downright nasty. But with his designer’s eye, Mike took the wooden bull by the horns and created this terrifically timbered Honda CB550 Street Tracker he calls the ‘M3’. 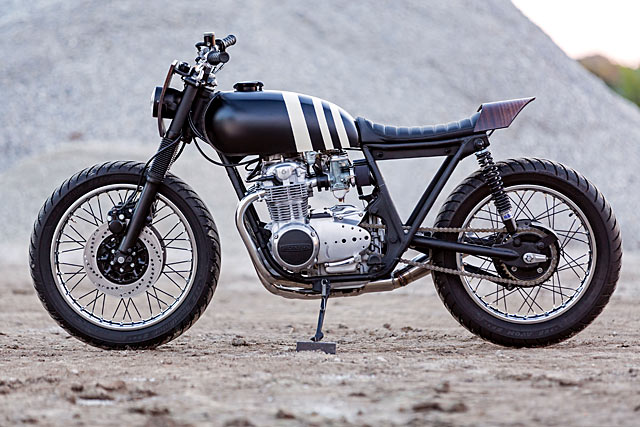 Mike’s Monnom Customs is located in Des Moines, Iowa. Building bikes takes up about 40% of his time. For the other 60%, he designs and builds custom furniture under the banner of ‘Nestcraft Studios’. “I used to do a bit of mechanical bike work on the side,” says Mike, “But I have since let those projects go so I can focus solely on building complete customs”. 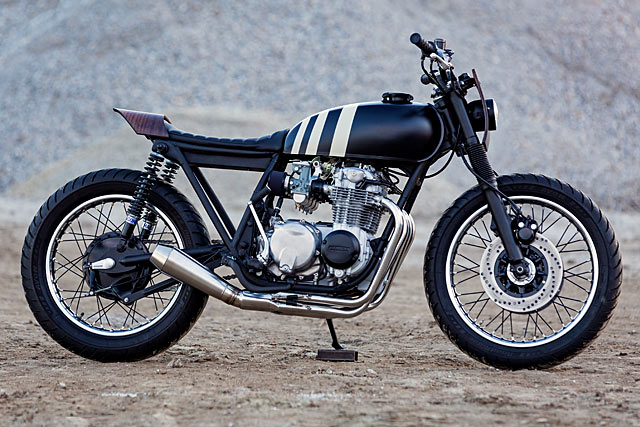 “These bikes take a lot of time, especially when you’re incorporating new materials and ideas into them. A lot of the time is not spent working on bikes, but experimenting with materials, shapes and questioning your own design aesthetics’. Clearly, Mike doesn’t like to force things; he says that a month or two longer in the building process usually equates to a much more balanced bike, both in form and in function. Mike knew he wanted to incorporate a few wood elements into the build, but he also wanted to make the M3 as aggressive and sharp as possible. “I wanted the lines of a flat tracker bike with a bold, clean street look. Minimalism is always important to me with these builds and I knew the client wanted as much black as possible’. To stay on brief, Mike kept two words in mind, ‘Tough’ and ‘refined’. 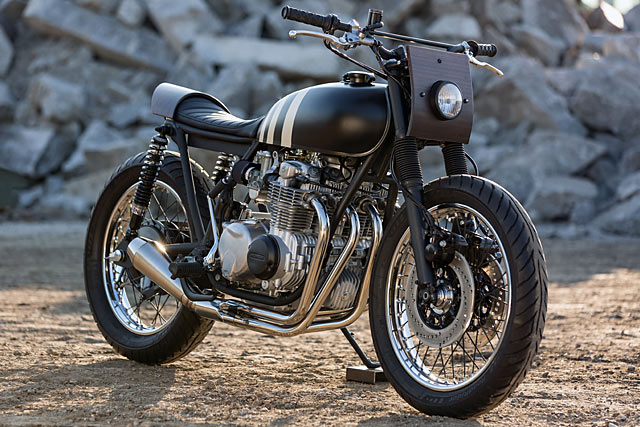 “The build began with the client’s existing ‘76 Honda CB550, which had been laid down at least once in the last few years. I was lucky enough to acquire a CB550 parts bike around the same time I began the project, so I was able to utilize a few undamaged engine parts from it. I started by rebuilding the CB550 motor with some new rings, a cam tensioner and gaskets amongst other things. I also rebuilt the carbs and properly jetted them”. 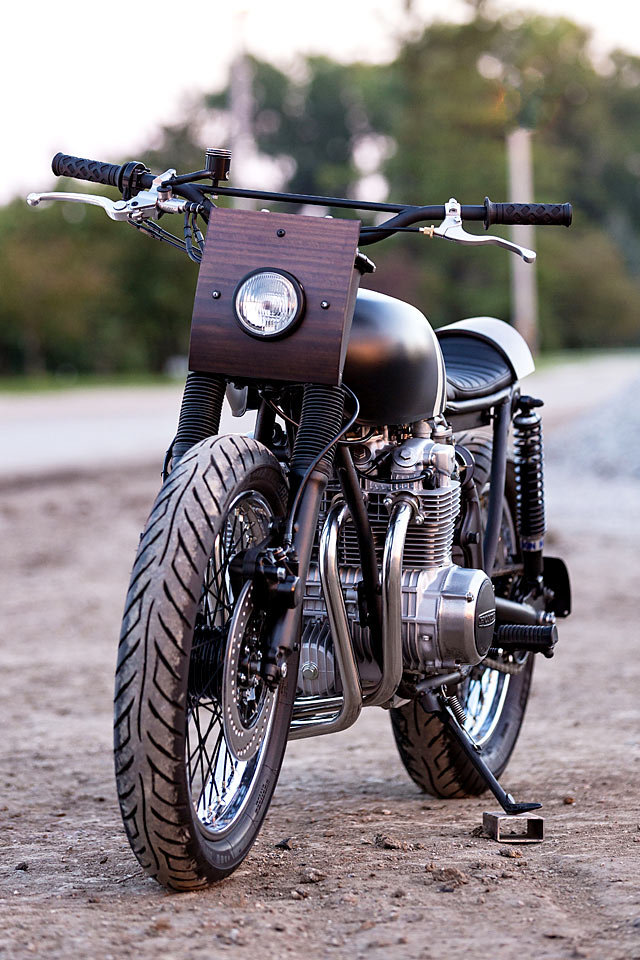 Mike wanted to do a brushed steel look on this bike instead of the usual mirror polish he’s so fond of on the engine cases, so all the parts were cleaned and brushed before reassembly. Much of the bike is powder coated with a textured matte black so all the steel fabricated parts, spokes, frame, swingarm and fork tubes were prepped and sent to the local powder coating shop. 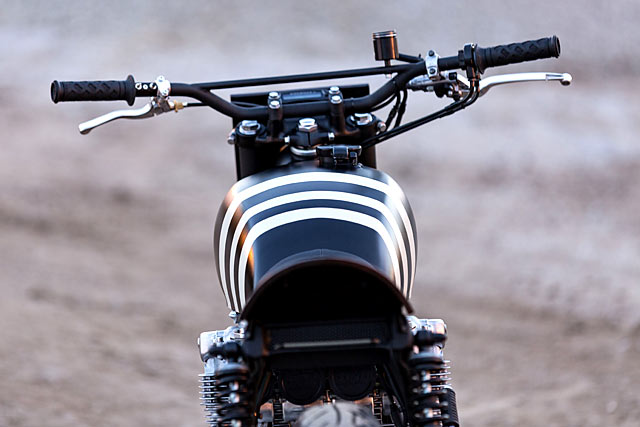 “The bike was then fitted with Dyna coils and electronic ignition, dual drilled front discs with a new Nissin master cylinder, Hagon shocks, an oversized set of Avon Roadrider tires, a Cone Engineering slip-on exhaust, stainless steel headers and a Trailtech speedo. I also swapped out the ’76 tank for the older Honda CB550-style unit from the ’74 parts bike. 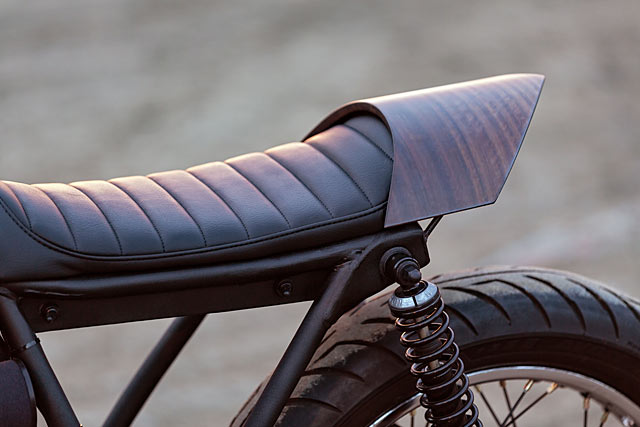 The wood elements on the bike were inspired by the seat cowls and number plates commonly found on flat tracker racing bikes. Mike played with several different shapes and wood species; finally he settled on using a dark, fumed Eucalyptus veneer. Then he created the bending forms of the appropriate shape and vacuum formed the front number plate and rear cowl wood cores for the Honda. A veneer was applied and the items were coated with a matte clear finish. “I think the wood is an elegant touch to a very tough-looking bike”. 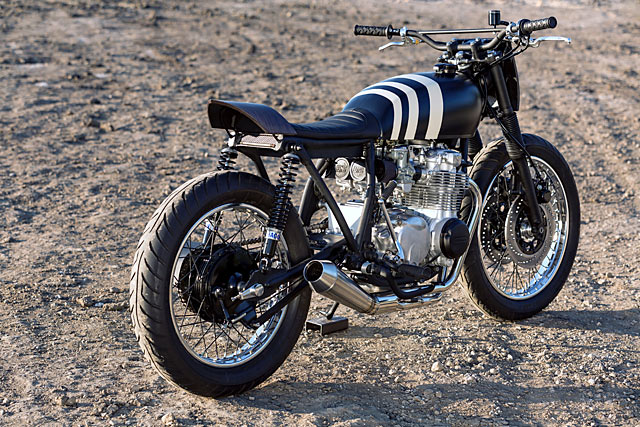 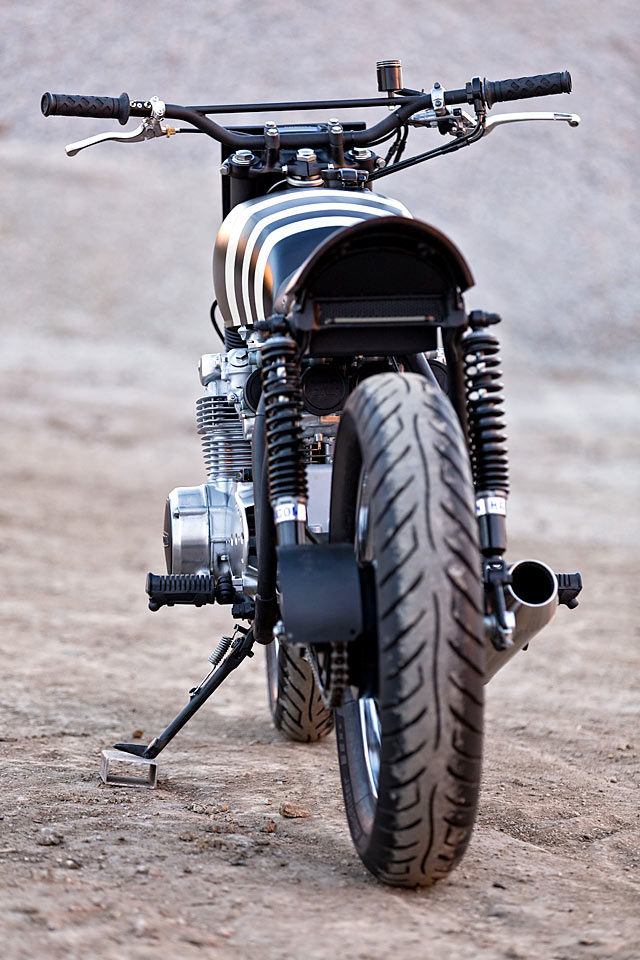 “I love the stance of this tracker and the way the wood flows into the overall feel of the build. When you look at the profile of the bike, there is a distinct line that flows over the tank to the seat and then off the point of the tail. Those flowing, crisp lines are sometimes hard to achieve but when you can do it, it creates such a timeless look and feel”. 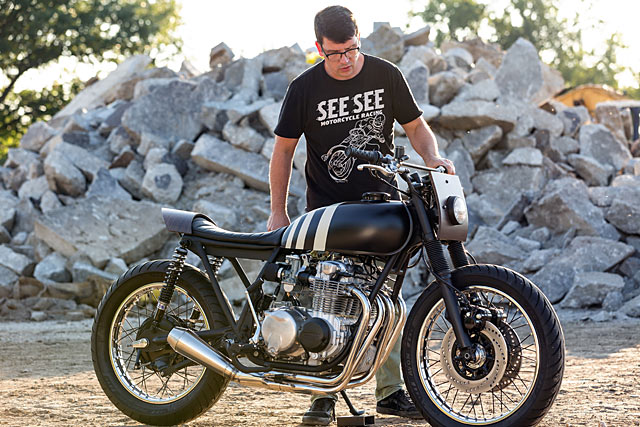