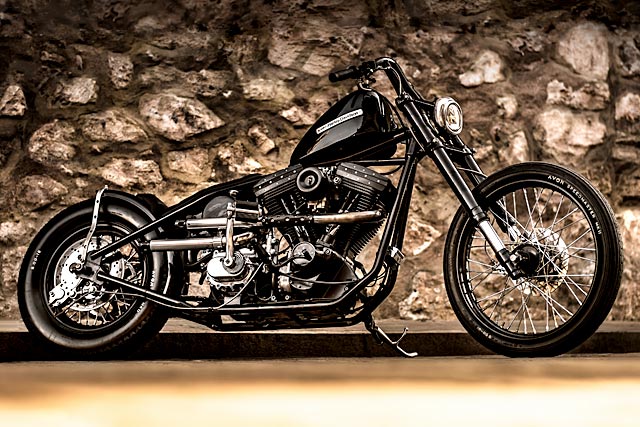 Argentina’s Lucky Customs have done more for 1980’s Harley Davidson than anyone else in recent years. A few months back we ran a show-stopping turbo salt racer from the Cordoba-based business and now they’ve followed up with this spectacular blacked-out 1984 Evo chopper dubbed ‘Rock’n’Rolla’. 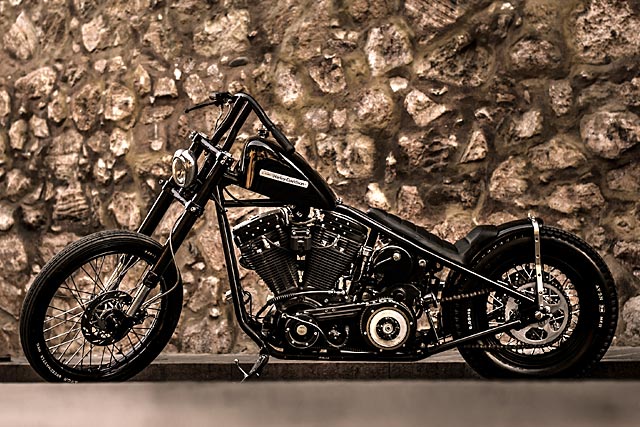 Now I say it’s a 1984 Evo Harley Davidson but in reality there’s not much about the bike that’s stock. The engine remains about the same but everything aside from that has been binned, ground down, cut off or replaced with another part. Which is rarely store bought. The hands-on team at Lucky Custom aren’t fans of off the shelf items. ‘We make everything in a very traditional way,’ head of the shop, Lucas Layum, says. ‘The fuel tank, fenders, seat, handlebars and footpegs were all made especially for this project.’ 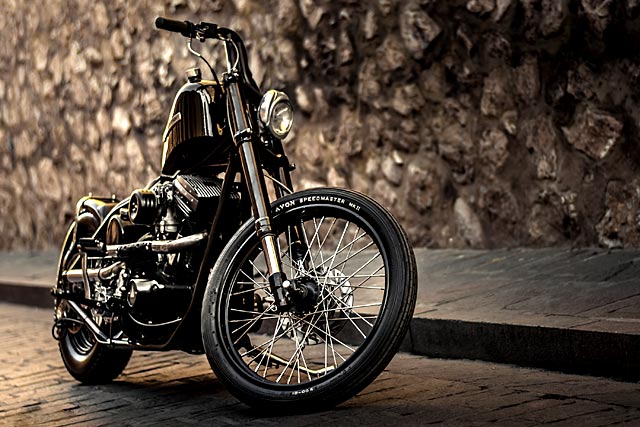 That was partially because the team at Lucky Customs are a clever bunch of bastards and partially because of a curious set of requirements laid down by the client. It had to be built with a tall rider in mind. While being six foot two hardly makes him a giant, that kind of frame can make riding a balled up chopper a painful experience – and make the rider look pretty stupid as well. 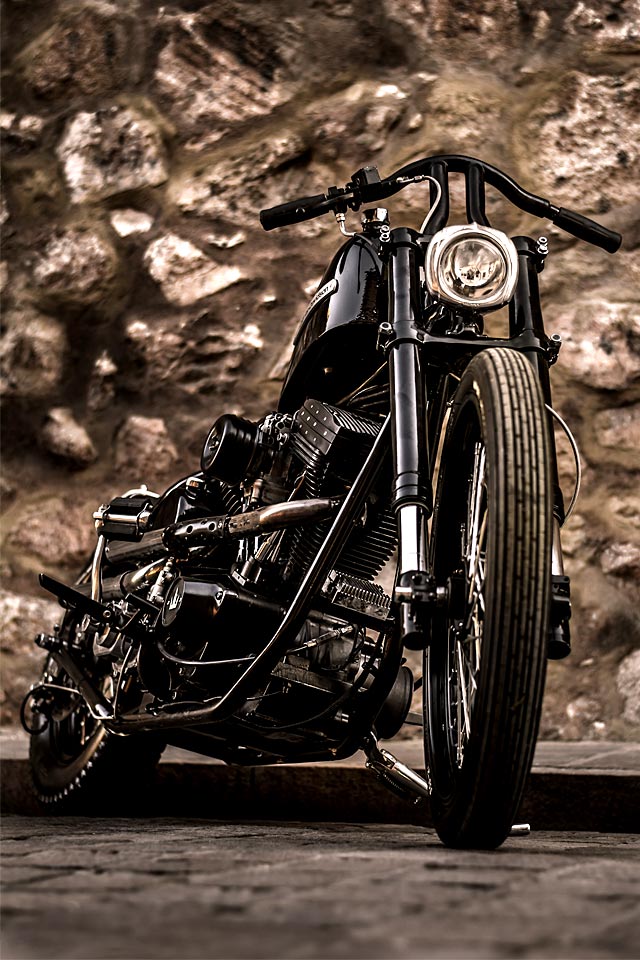 So take a careful look at the handlebar position, footpeg mounts and seating arrangement you can tell how it’ll suit a larger guy without attracting comments about monkeys fucking footballs. It’s well really well thought out. 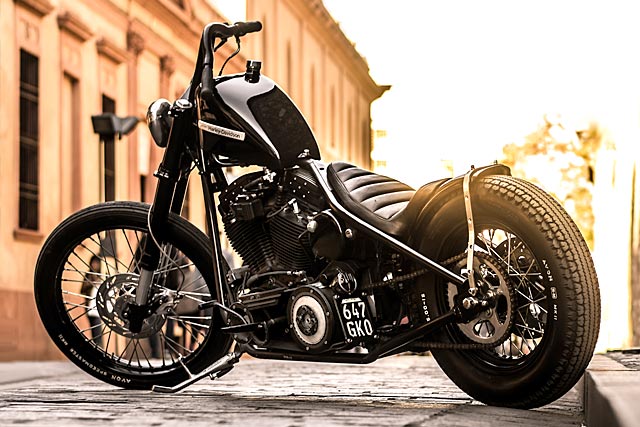 While that meant hundreds of hours of fabrication, the team did use a few off the shelf items in neat ways giving this take on the 70’s chopper a more modern twist. Take the front end – the  Rock‘n’Rolla runs modified Yamaha YZ USD forks and Performance Machine brakes, allowing the bike to stop as well as it runs. 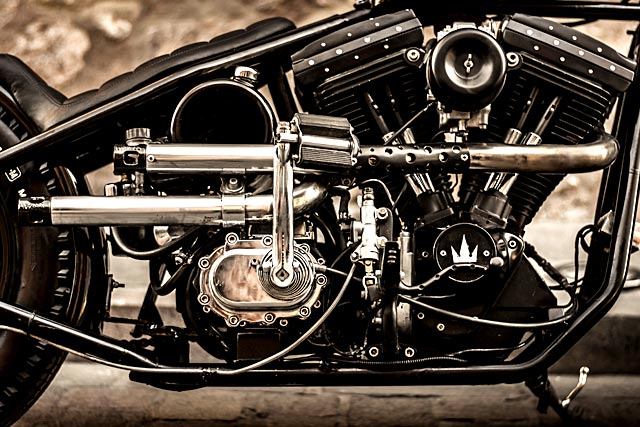 “ ‘(It) breathes out through a stainless steel exhaust system made by the shop. It sounds like thunder,’ Lucas adds.”

Which should be pretty well, considering the engine has had a freshen up, a five speed gearbox installed and mated to a dry clutch and suicide shift style arrangement. The whole assembly is fed by a whopping Keihin carburettor and breathes out through a stainless steel exhaust system made by the shop. ‘It sounds like thunder,’ Lucas adds. 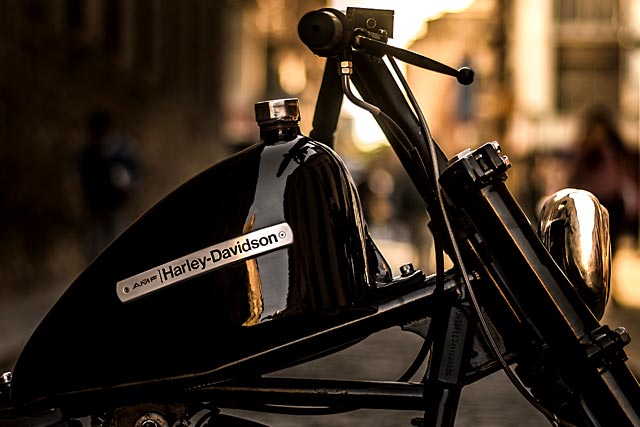 Stepping back, the Rock’n’Rolla is outfitted in a subdued black colour scheme, with miles of gloss black paint and powdercoat, with a few select pieces of chrome and polished metal. It’s designed to be a throwback to timeless 1970’s Harley choppers, although a bit more subdued than most. 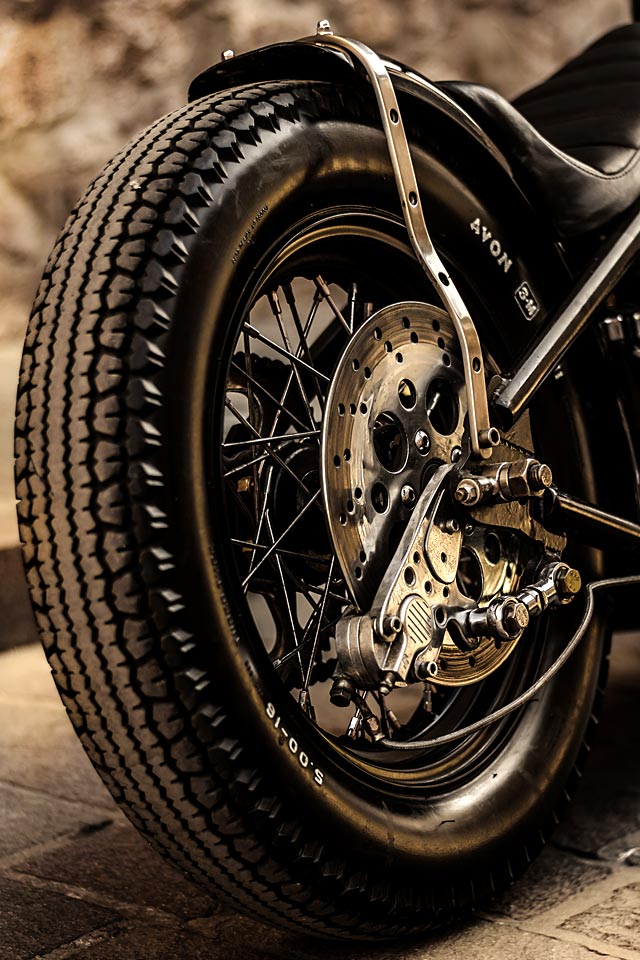 “For me the very definition of style is a Harley chopper or bobber from the 70’s”.

And it all works really well together – as you’d expect from a shop that has 46 bikes now under their belt. Rock’n’Rolla is clean as all hell, will run and handle neatly and is a terrific homage to 1970’s choppers with a few sweet modern additions. For the new owner it’ll fit like a well-oiled black glove. And the shop is proud of it too. ‘What I like is it’s dark look that never goes out of style,’ Lucas says. ‘For me the very definition of style is a Harley chopper or bobber from the 70’s.’ 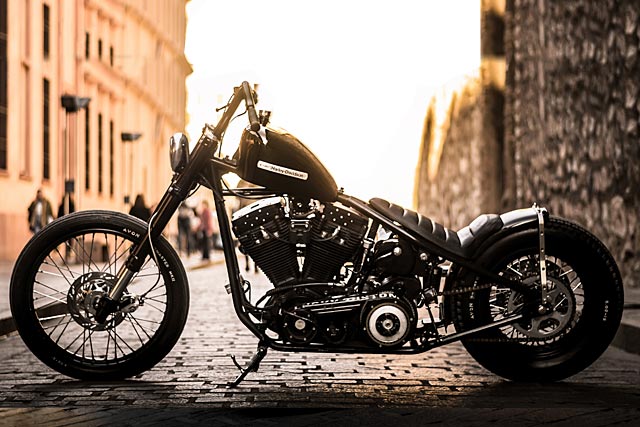