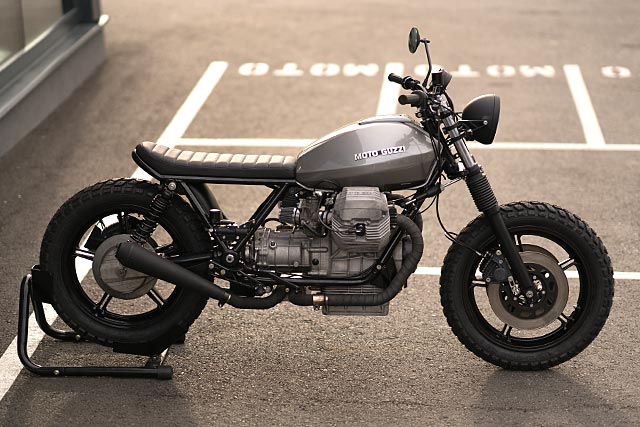 Your average motorcycle is made up of around 2000 individual parts. And any customiser worth their salt will have to consider each and every one of those before they get to a finished custom bike. Some will gloss over these details, but we think it’s fair to say that Austria’s David Widmann and his NCT Motorcycles is not one of those builders. And with the release of this Moto Guzzi T5, his latest build, he’s proven it. Like a bit of attention to detail in your customs? You’ve got it. 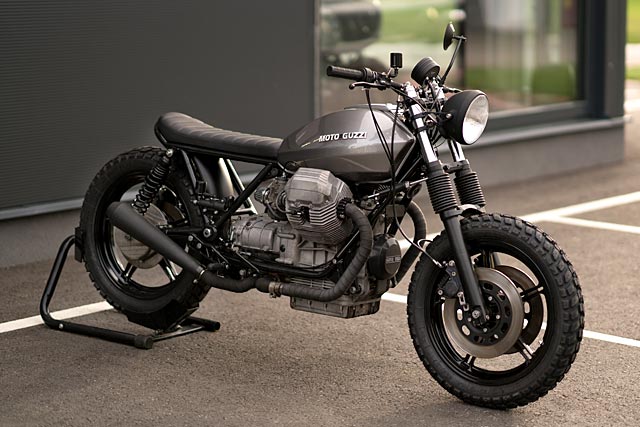 It’s been a while since NCT finished their first Moto Guzzi, but luckily for us they thought it was a good time to present their second T5 Guzzi build. A custom project for a client with very high standards, tool time wasn’t started until they had agreed on a clear concept and design. “Once we’d ticked that box, we started stripping down the bike,” says Dave. Then NCT team member Manuel Tilke, their resident chassis and sheet metal specialist, reworked the frame by cutting off the rearward excess and rebuilding it with a jaunty upturn above the rear axle. 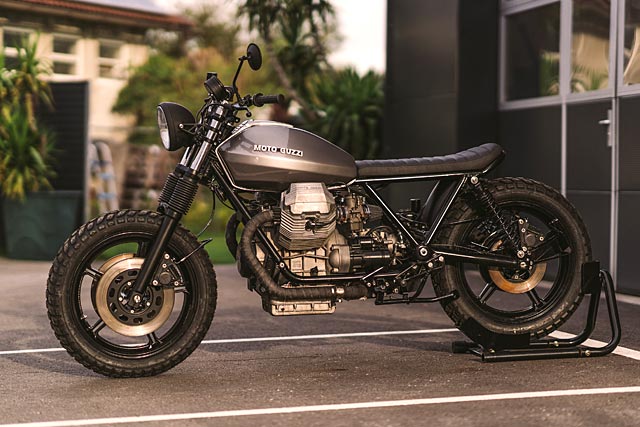 A touch of brat, too

“The next step was to design, fabricate and cover the new seat. It was wrapped by a very good local saddler that we’ve been working with since the start”. Manuel also reworked the original footrests, giving them a brand new look.

“Powder coating of the frame, rims, footrests and the license plate took around three days. When we got them back Mario Wieser-Kollandour, our Workshop Manager, put the revamped v-twin engine back where it belongs”. It also got a complete internal overhaul, a fresh two-in-one handmade exhaust system, a matt black muffler and two new air filters for a little more aural bite. 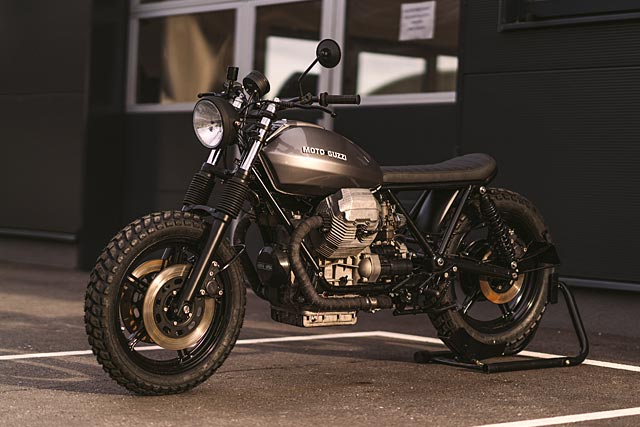 The factory rims then got two new Heidenau K60 wheels with their handy 50/50 road/dirt bias. Oh and the front forks received new gators, too. “In addition, we decided to paint the front fork lowers in black. Our client had made it clear that the bike had to have decent brakes, so we installed two new brake discs in the front along with a raft of other items to ensure it was a solid stopper”. 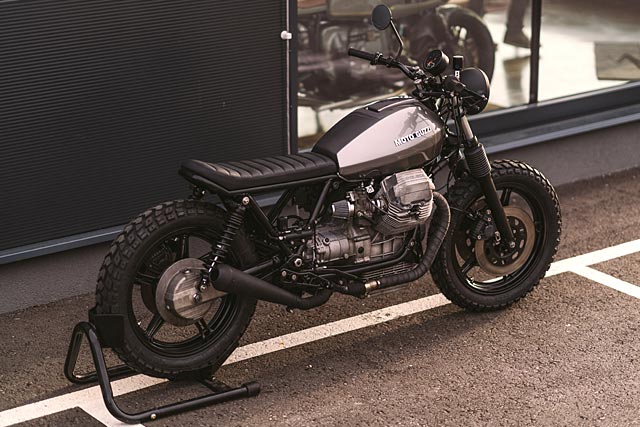 The original factory suspension was replaced with new Biturbo units and the original Guzzi ‘up and back’ touring ‘bars were swapped for new, scrambler-friendly LSL items. “Some cool details include the Brembo brake pump and the new Rizoma reservoir. In addition to that, we have also replaced the bike’s throttle and the clutch cable to make sure they last the distance”. 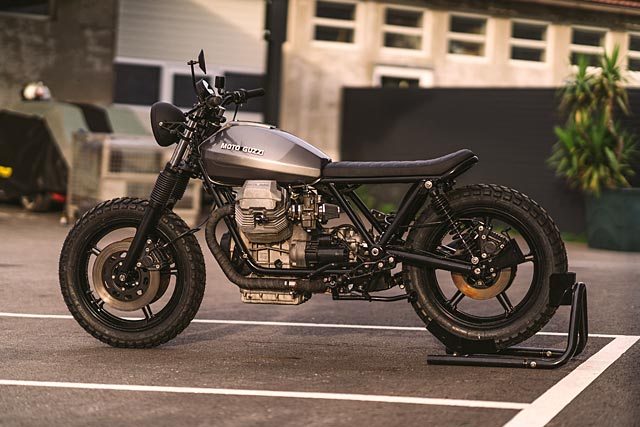 For a minimalistic clean look, Dave turned to the ever-reliable Motogadget with the popular M-unit controller wired to a new, smaller battery hiding underneath the engine. “Motogadget really helps with hiding all those messy wires”,  says Dave, so it was possible to give the bike the clean, minimalistic look it was so clearly wanting. 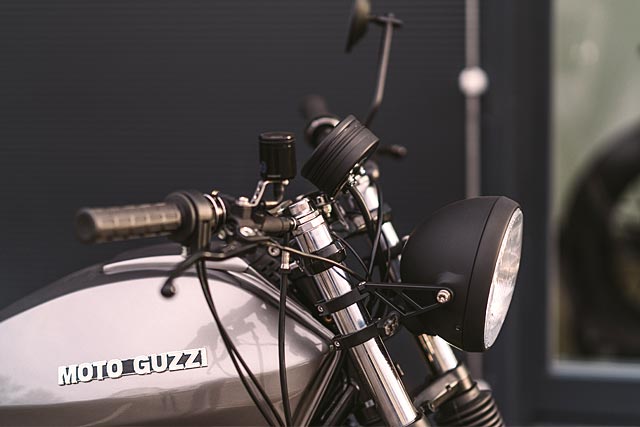 The closer you get, the better it looks

“In addition to the M-unit, we also mounted two tiny M-switches on the Guzzi’s bars. The speedometer is from Acewell and the new turn signals in the front and back are mini LED items. The old headlight was also replaced”. And as a last hurrah, Manuel gave the tank a beautiful new color scheme in a deep metallic silver. 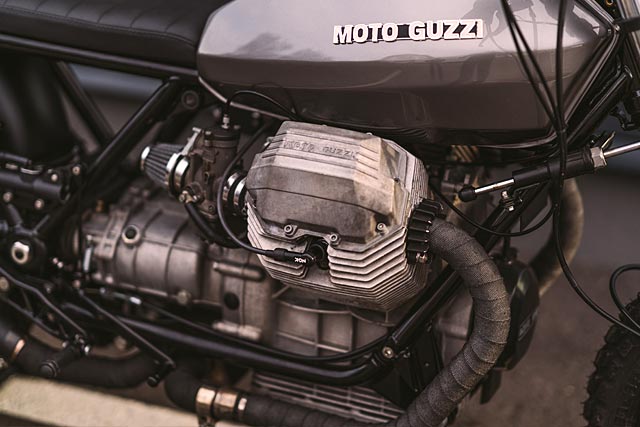 Just the right amount of patina

Dave says that the hardest part was probably the exhaust. How so? “We had to include a silencer underneath the engine because without it, the bike would be too loud. We’ve tried it before. Also, it was easier to get a clean two-in-one exhaust solution this way”. 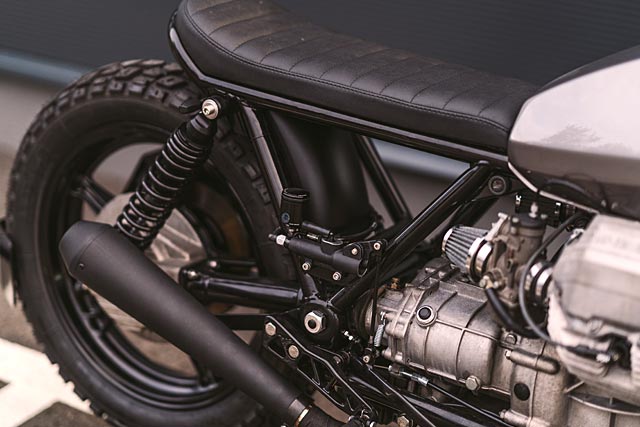 “What we like most is the color scheme of the finished bike,” says Dave in closing. “You can see that it all goes together perfectly and it gives the bike a mean, minimal, precise look”. You’re preaching to the converted, David. You had us at “custom Guzzi”. 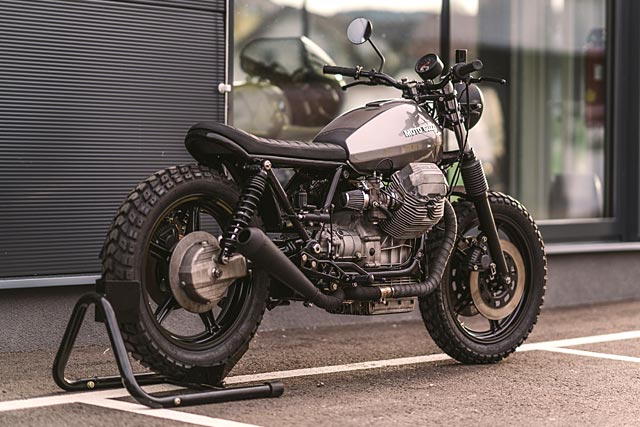