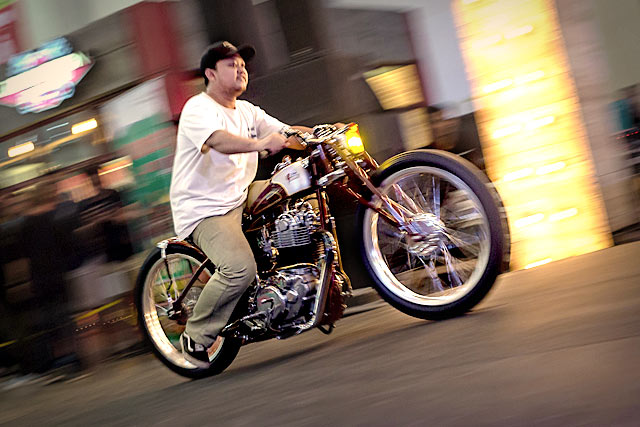 In our second big South-East Asian event for 2017, and easily one of the best shows all year, October saw us in Yogyakarta, Indonesia, for two days of custom motorcycle wet dreams, beers and sate sticks all wrapped up in a very cool hoedown called ‘Kustomfest’. We came, we saw, we wandered. And at the end of it, we were glad we did. 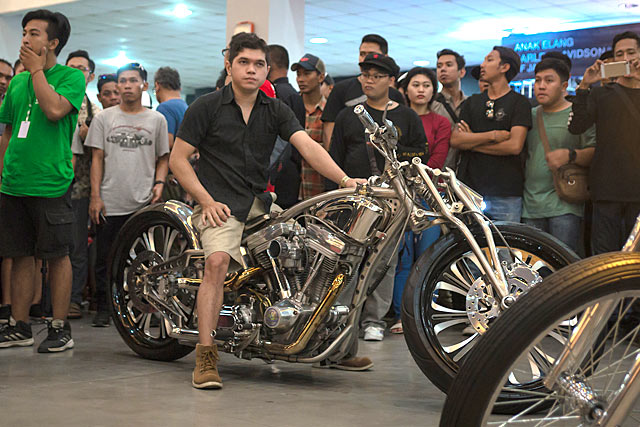 Yogyakarta aka Jogjakarta aka ‘Jogja’ is Indonesia’s old capital, and is placed about halfway between Jakarta and the island of Bali, smack bang in the middle of central Java. If you can imagine all the best bits of Jakarta and Denpassar in one not so big city, you’d be on the right track. It’s also smack bang alongside the sometimes dormant Mount Merapi volcano. Locals assured me that it only erupted every four years or so, and it’d been about three years since its last tango. Good to know. 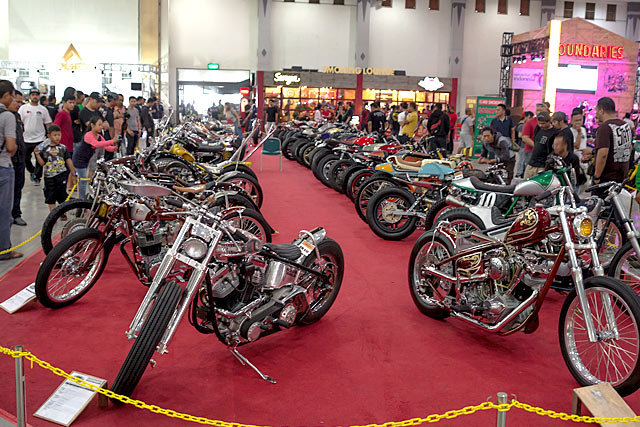 After meeting our P.A. Ratna, who made us feel like kings while we were there, we were quickly whisked of to the show on the afternoon before its official opening. The frantic race to get things ready for the next morning jarred markedly with the casual, unfussed attitude of the Javanese locals. Clearly they had a long night ahead of them. 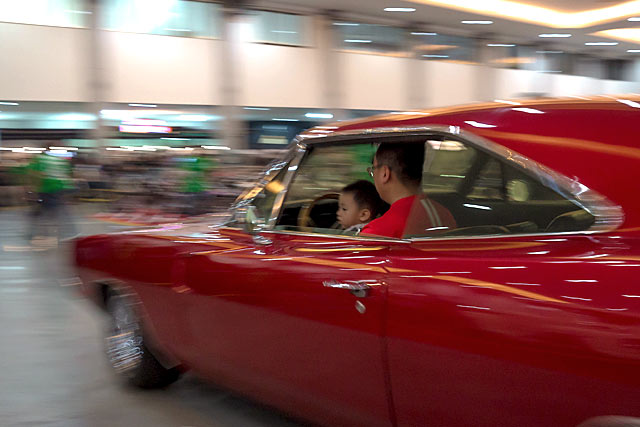 Woken by the local Mosque’s calls to prayer (all 5 of them), I grab a quick bite to eat and head back to the convention centre. The show’s in full flight. The previous day’s army of tradesmen have disappeared into the humid morning air and the crowds, both local and international are descending. What a scene. 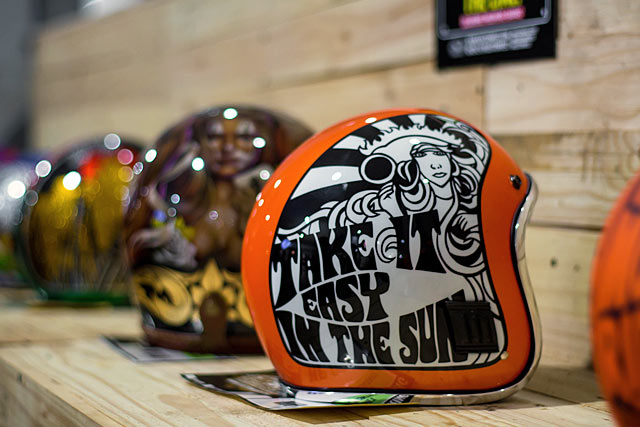 Held under the one roof, the show’s divided into three distinct sections. The display booths occupy the eastern third of the space and include such luminaries as Deus ex Machina, Royal Enfield and local builders Studio Motor. The middle area is an ocean of custom bikes, with the only respite being the event’s main stage. And the western end was occupied by our four-wheeled brethren, including some homesick-inducing Aussie metal. I looked longingly at a Torana, Monaro and Statesman before my patriotic tears prevented me from seeing them properly. 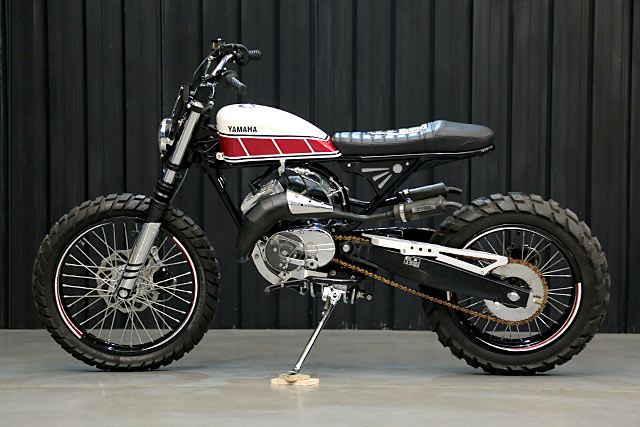 Moto celebrities were in abundance. I was stoked to again catch up with Kai from Cherry’s, along with the always smiling Shige from Mooneyes Japan. Some new acquaintances included Christian from Sosa Metalworks and Yaniv Evan from Hollywood’s Powerplant Motorcycles. Local bike royalty was almost too extensive to mention, but finally getting to meet Studio Motors and Thrive Motorcycles was way cool. Veteran Aussie Indo stalwarts Geoff and Luke from Return of the Cafe Racers/Tank Moto/Fuel mag provided some familiar accents and advice on what to do when. 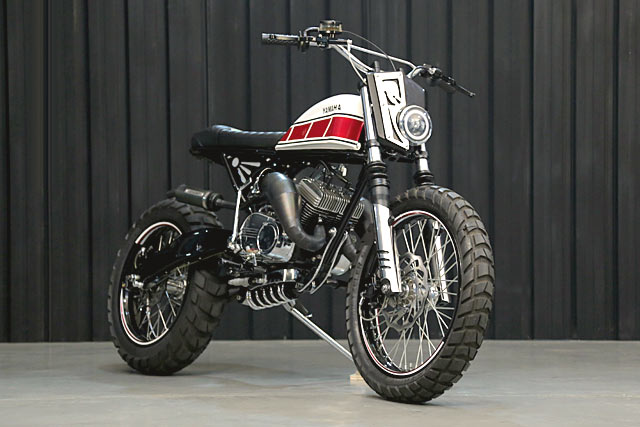 And then there were the bikes. Show’s like this tend to give you the feeling that there’s just way too many cool things to wrap your head around and that you’re probably missing out on entire goldmines of goodness. Kustomfest was no different; just when I thought I’d made a complete mental list of my favourites, I’d see another bike that would blow me away. Needless to say, the bikes you see here are just the tip of the show’s iceberg; nonetheless they were they ones that really floated our boats. 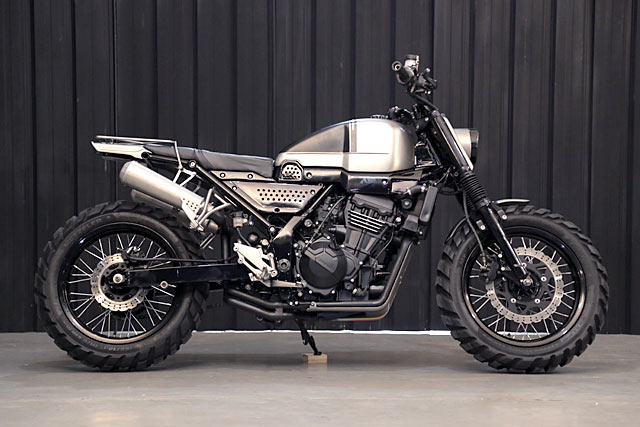 There was a distinct focus on boardtrackers and scramblers, at least in the show’s ‘open’ sections. And the usual (yet always cool) Japanese influences that understandably dominate at the Asian shows were there, too. Plenty of out-there sissy-barred choppers and bobbers with whitewalls were on display. We’ve sifted through thousands of photos to produce the minuscule collection you see here. 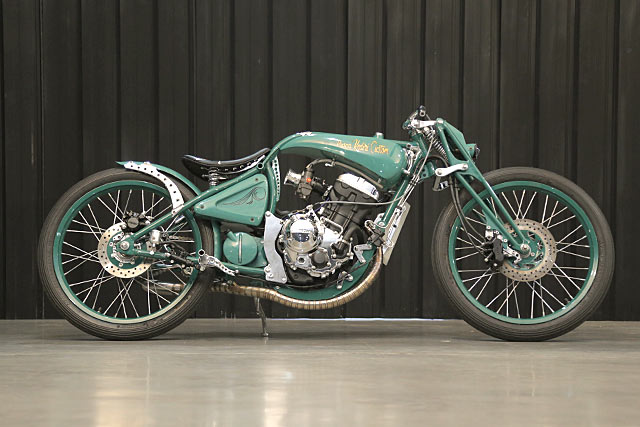 A Honda board tracker from Puspa Kediri Kustoms

Dropping some cash on a gold flake helmet and some awesome pin striping from Japanese brushers Jetwrench Art Studio, we eventually had ourselves a suitable trophy which was duly awarded to the local boys at Custom Concept Industries for the awesomely minimal Yamaha RD scrambler (Above). What it lacked in bling and fuss in more than made up for in pure ‘it must really rip’-ness. Not being able to ride it like a lunatic was a genuine downer. 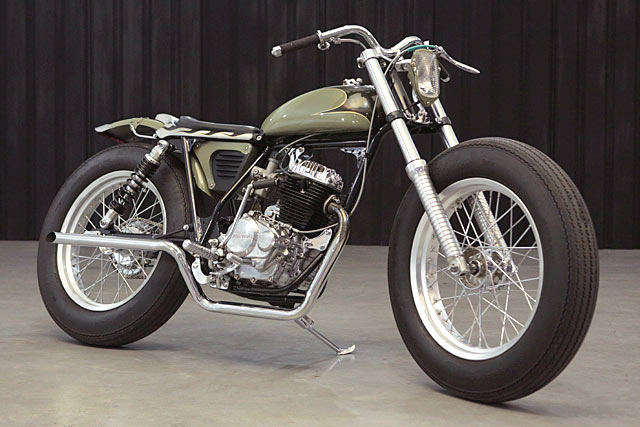 Sunday afternoon saw us descend into a well-earned beers and food fest which eventually moved on to the official after party. Nothing says ‘off the hook’ like free bottles of whisky being passed around and the Monday morning vibe was decidedly damaged. Happy, but damaged. 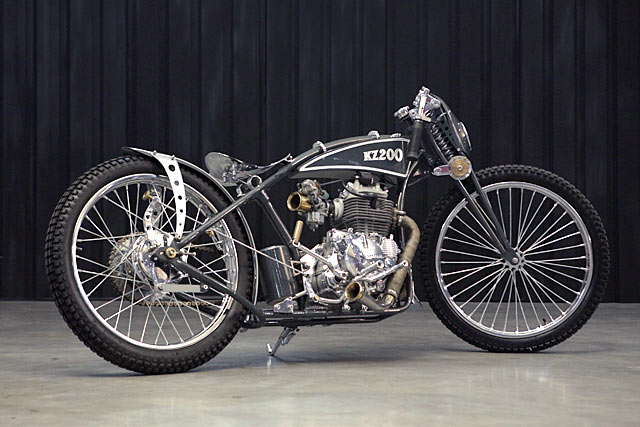 All up, it was a truly awesome show and one that we’ll seriously look forward to next year. With its mix of tropical weather, number and range of bikes, international pulling power and chilled vibe you’d be hard-pressed to beat it pretty much anywhere outside of Japan. And that’s including Australia. If you’ve been planning a trip to the bottom right part of the map, you’d be crazier than Donald Trump’s P.A. to miss this one in 2018. See you there. 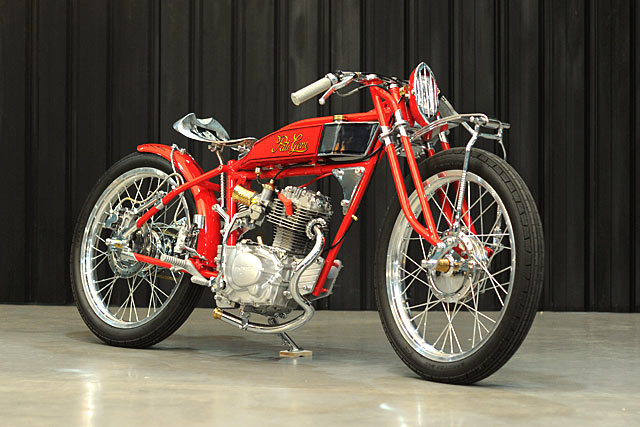 A Honda boardtracker by BNJ Workshop 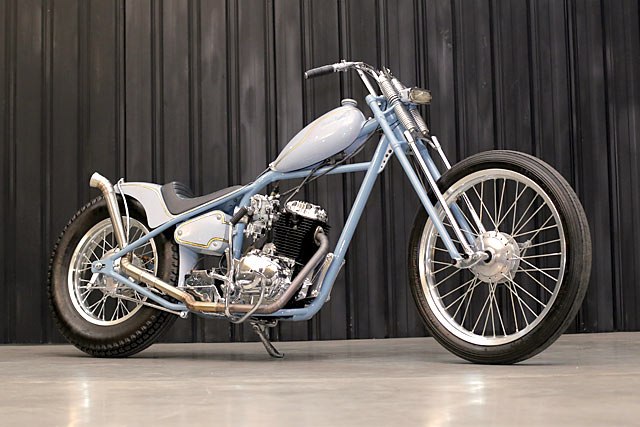 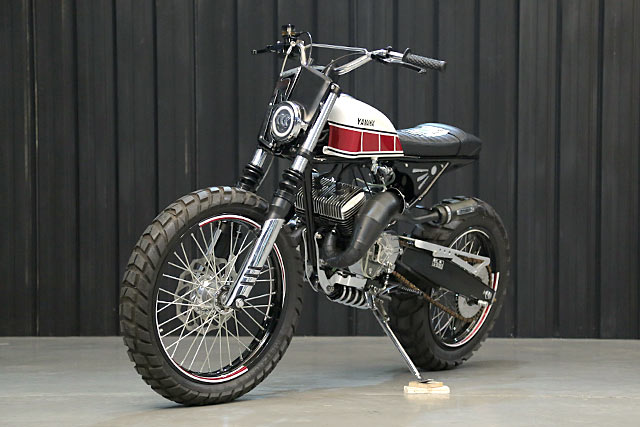 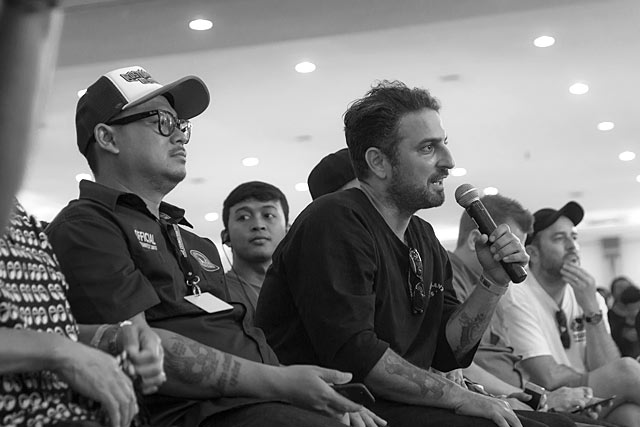