THE WIZARD OF OZZ. A Ducati ST4S Cafe Fighter By Ozz Customs 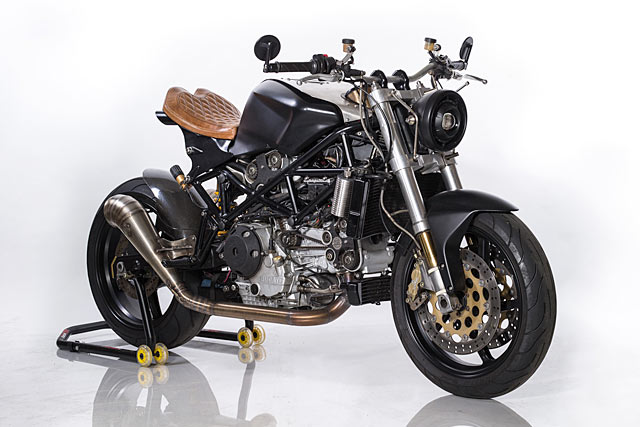 Despite being one of the most enlightened countries in the world the Netherlands custom scene is quieter than you’d expect. I’ve no idea why this is – they could be all too busy getting ripped, getting drunk or falling off pushbikes to really catch the bug. But for whatever reason, Roosendaal-based Ozz Customs breaks the silence yet again with their latest build, a Ducati ST4S touring bike cut down into a mean cafe fighter. 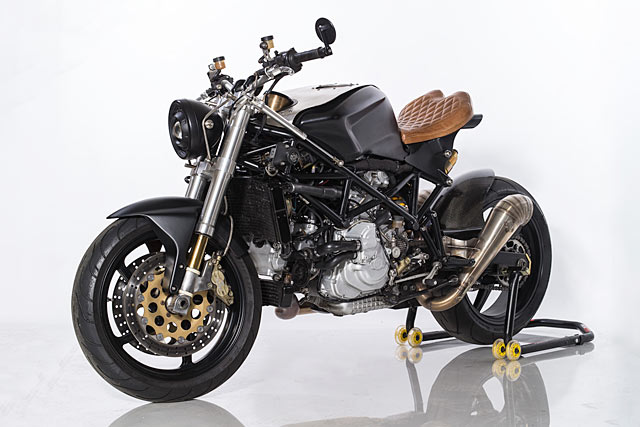 First up, Jeroen ‘Ozzy’ Potters is quick to point out that his shop is much more than a motorcycle workshop. ‘It’s not just a shop, it’s a man cave!’ he says, ‘We’ve got welding equipment, a lathe, grinders, compressor… all the things a man needs. We’ve also got big speakers for music and a fridge for beer!’ 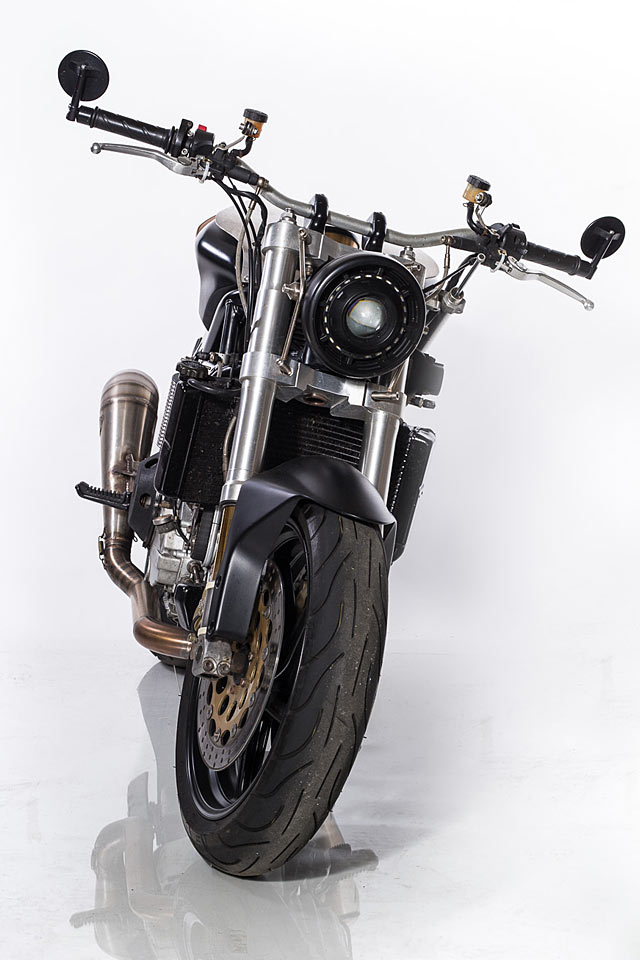 But it’s not all about getting trashed and listening to music in the land of Ozz. A few years ago they produced a traditional cafe racer based on a stinking old two-stroke Suzuki T500. ‘I desperately wanted to ride it, but the vibrations made my prosthetic leg hurt like hell,’ Ozzy explains. ‘So eventually somebody offered to trade it for a 2001 Ducati ST4S. It’s not the most beautiful Ducati – but it’s still a Ducati, it has bucketloads of character and a 996cc engine.’ 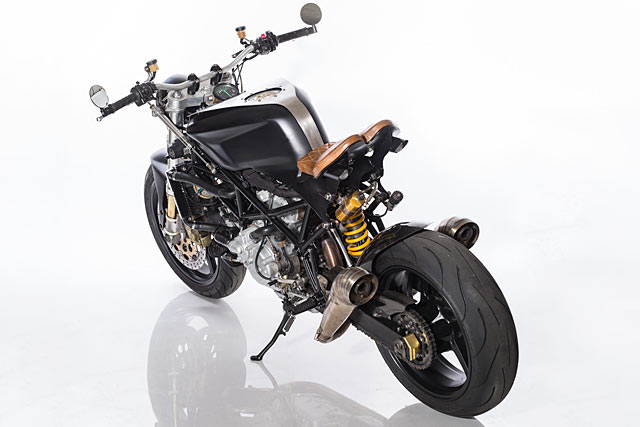 The first thing Ozz did was remove the wind-beating fairing and laid them aside. ‘If anybody is after some plastics for a ST4S, I’ve still got them here!’ he says.  After a quick hack with a grinder to remove the tail section they had a few drinks and studied the stock fuel tank, a curious mix of soft lines and a straight right angle down to the standard seat. 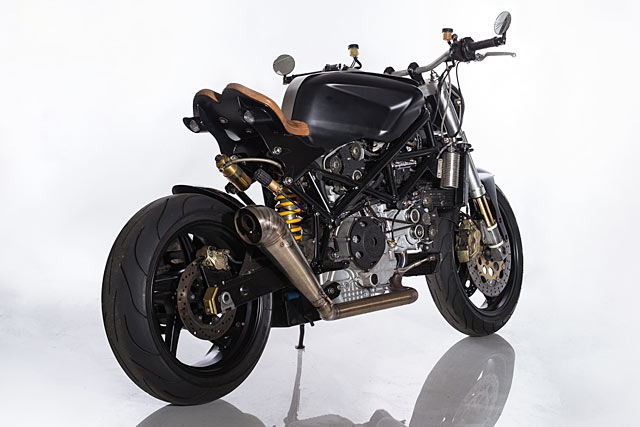 ‘A friend of mine is a Ducati specialist and had a plastic fuel tank for a 1098 sitting around,’ Ozzy explains. ‘That’s smaller and has a better look. But not exactly what I wanted. So I made a stainless sheet steel cover for it by hand.’ While he was there, the sides of the tank were also smoothed down, to help match the rear of the bike. 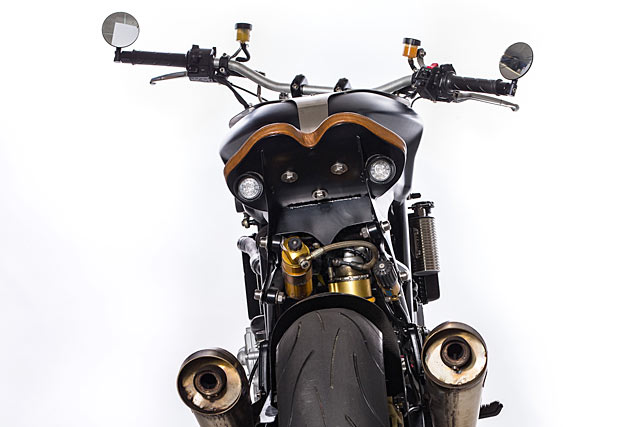 ‘At the back I made the tail from cardboard and kept altering it until I was happy with the final result. Then I made it out of sheet steel.’ At the same time Ozzy inserted the tail lights into the seat. ‘That tail was the hardest part to build,’ he explains, ‘together with the seat pan’. After it was completed, local stitching gurus Miller Upholstery did the honour of building the saddle. 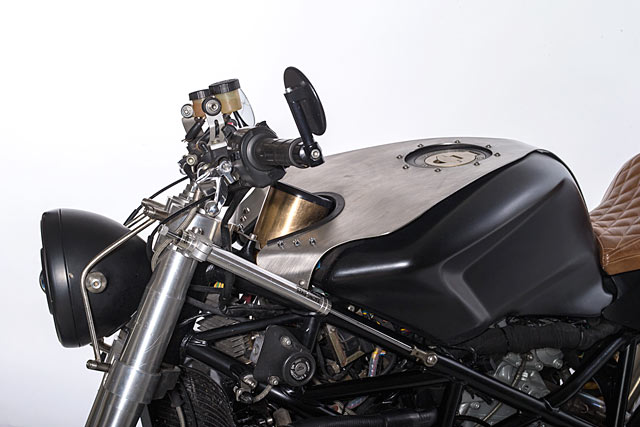 Up front, triple clamps were designed in CAD and then milled out by a friend of the workshop. Above that a superbike handlebar is held into place by Honda risers. The USD forks and capable Brembo brakes are left standard. 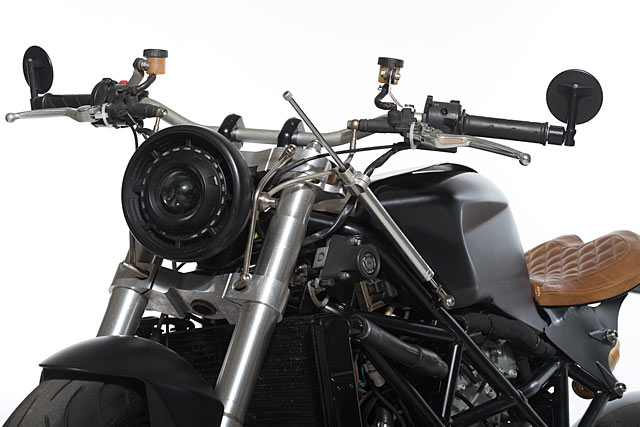 The engine itself remains relatively stock. ‘The side where the belt drive is so beautiful I wanted to keep it open and on display,’ Ozzy says. ‘So I made some custom covers for it.’ The covers on the belt drive protectors and dry clutch plate are both painted in a ‘wrinkle’ finish, a favourite of the Harley Davidson crowd. 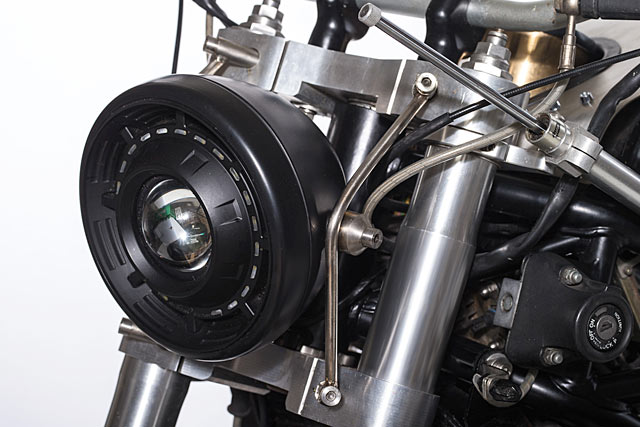 Internally though the Ducati has gone for a trim. The flywheel has been machined down, from 1.8 kilos to only 1 kilogram. ‘After all that shaving it was put on a dyno and we remapped the ECU. It’s got around 110 horses at the rear wheel now,’ Ozzy says. ‘This winter we’ll upgrade the exhaust and open up the airbox and it’ll improve even more.’ In the meantime the bike, which rolled out of Bologna tipping the scales at 225 kilos now weighs only 192. I can’t repeat the exact phrase that Ozzy used to describe how quickly the bike winds the power on but it involved scared, molested primates. 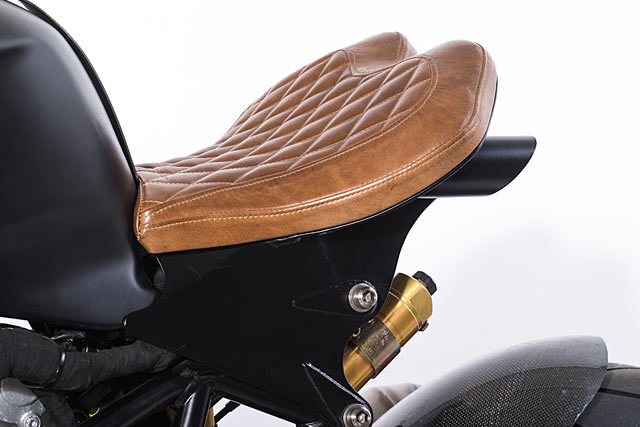 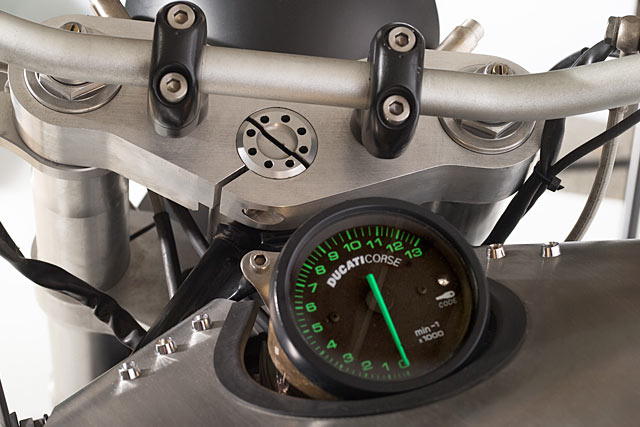 All in all Ozz Customs have crafted a pretty bland Ducati sports tourer into something reminiscent of what factory manufacturers are trying to build themselves. It’s a lightweight, powerful bike that’ll absolutely hammer – and one that straddles the line between cafe racer and a bike that really hauls ass. But no one is happier with the bike than Ozzy himself. ‘I love the overall look of it and the smaller details of the build. I just love it!’