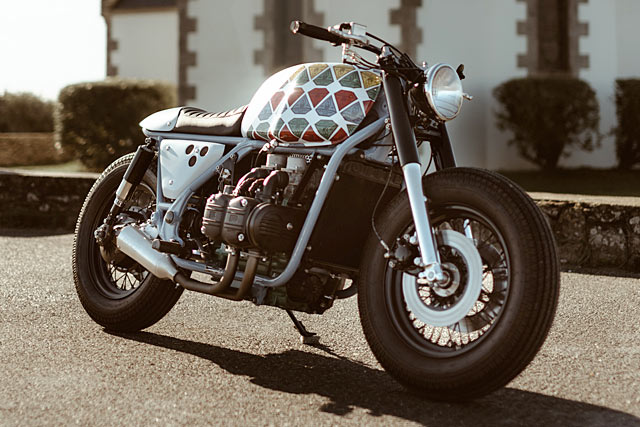 Here’s a fun fact. Shoichiro Irimajiri, the Honda engineer who designed the first generation Honda Gold Wing engine, had spent the previous 10 years making Grand Prix engines. His initial concept for the Gold Wing was a 1500cc flat six engine that put out a conservative 80bhp and propelled the test bike to well in excess of 140mph. This notion of pushing hard from the get-go is embodied by France’s Sur Les Chapeaux De Roues, whose name quite literally means ‘Getting Off to a Flying Start‘. Here’s their latest build; an ‘81 Honda Gold Wing that clearly knows a thing or two about flying starts. 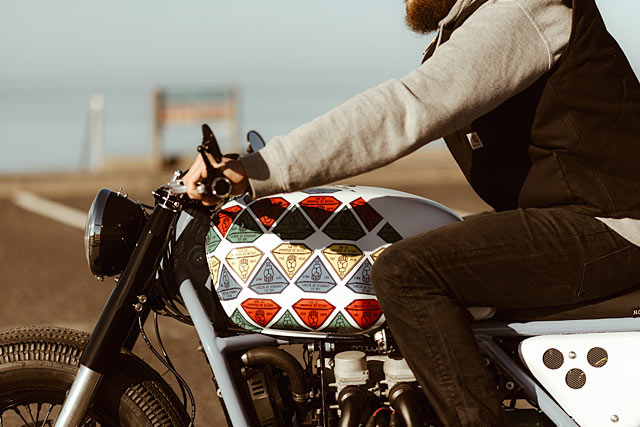 In a scene that sounds like it came straight out of a classic French movie, SLCDR’s Manu started the shop in 2013 by converting the Brittany-based workshop at his Grandfather’s farm. “Since then, I have been customising and rebuilding motorbikes in the very same location. I often work solo, but my friend Yann has helped me out in the past when needed”. Sounds a lot like the perfect set-up to us. 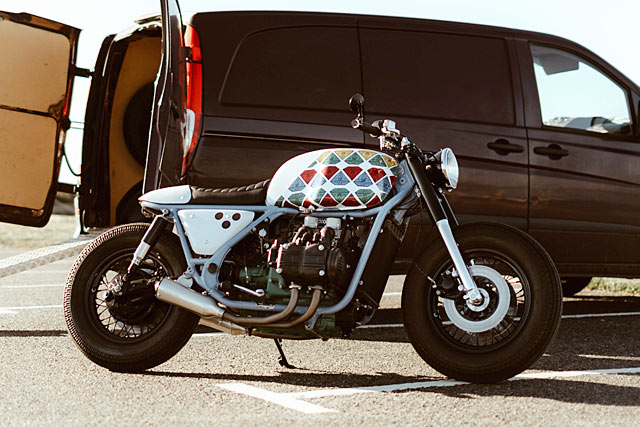 “This is our new bike. It’s a 1981 Gold Wing; we made it for a Belgium customer who had seen our previous Gold Wing when he visited The Bike Shed Paris Show in 2016”. As customers like to do, he got in touch with Manu and asked for a repeat performance. “Usually we never do the same bike twice, but this time we accepted the offer on the provision that we could refine some of the details and try something a little different with the paint”. The customer happily agreed, and the build was kicked off post haste. 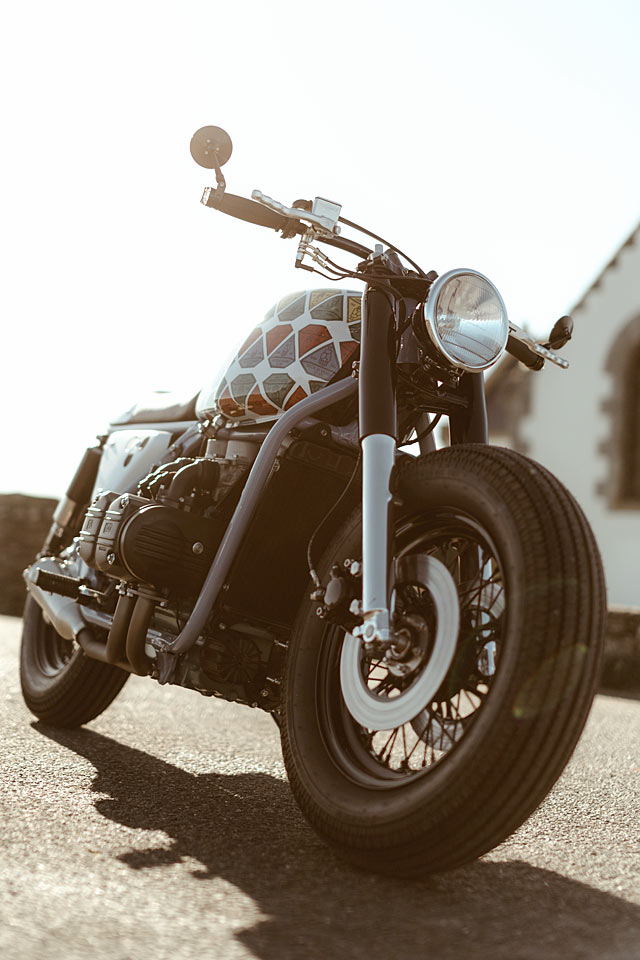 The donor GL1000 was located in an old workshop elsewhere in Brittany (they must have a lot of them) and was in a respectable, running condition. As with most of the Gold Wings sold at the time, it was maxed out with the typical add-ons including a radio, farings and another half ton of wallet-draining, dealer-pleasing do-dads. “We started by removing all the parts we didn’t need,” says Manu with a wry smile. We’re guessing that the pile of spares wouldn’t have been a small one.

“As with most of the Gold Wings sold at the time, it was maxed out with the typical half ton of wallet-draining, dealer-pleasing do-dads”. 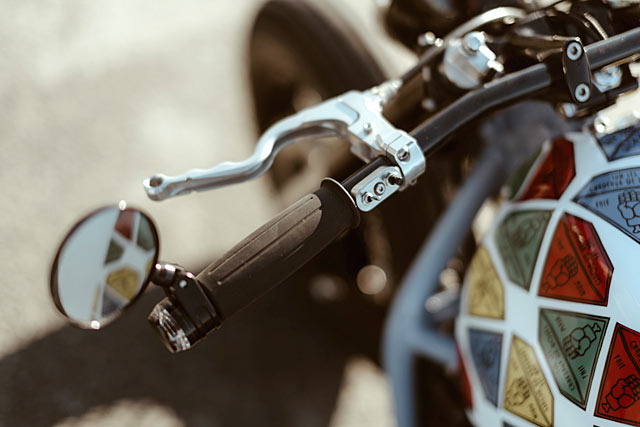 “Then we tackled the fuel tank relocation. Almost 70% of the bike’s frame had to be rebuilt, as the original fuel tank was located under the seat and we wanted to mount an old BMW unit onto the bike”. He proceeded to rebuild the rear and upper parts of the frame with 25CD4S CroMoly steel. “After this was done, we modified the BMW tank to integrate a Motogadget speedo and a pop up gas cap”. 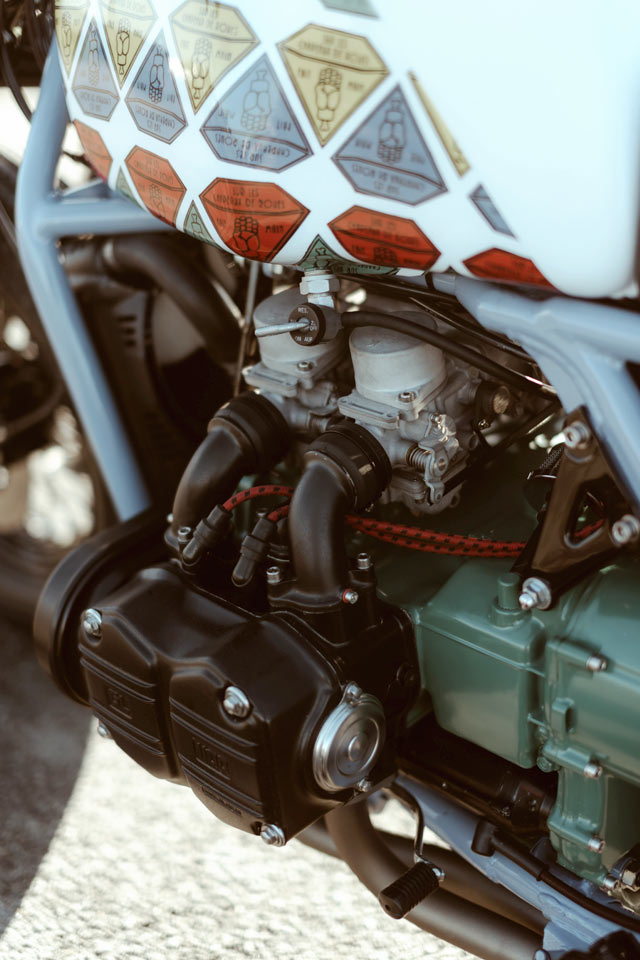 Then came the time for Manu’s details. Steel fork covers and aluminium side covers were fabbed up, along with an aluminium seat cover to allow it to handle both single and two-up. Next, he adapted a first generation Honda Gold Wing hub to some Harley 16″ rims and retro Shinko tires. Lastly, some British Hagon rear shocks were added to the blunt end and a new black leather seat was stitched up and bolted on. 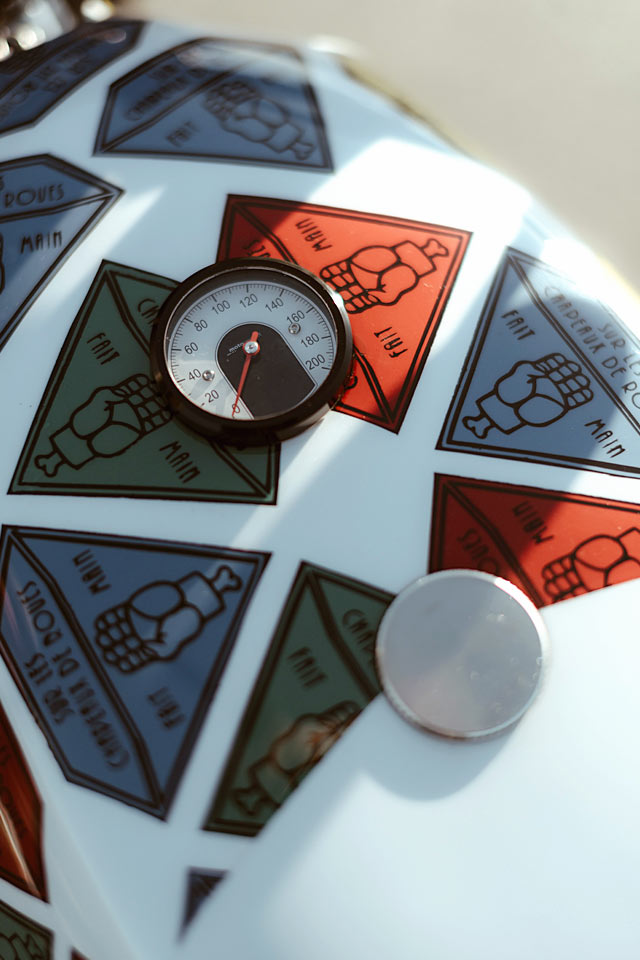 “We didn’t forget the engine, either. It was fully rebuilt with genuine Honda parts and given a subtle colour paint job. But it was the tank’s paint that really tested us. The writing on it says ‘handmade’, and that’s exactly what it was. Each and every logo was hand painted”. Then to finish things up, it was clear coated; there’s a full gloss on one side and satin on the other. 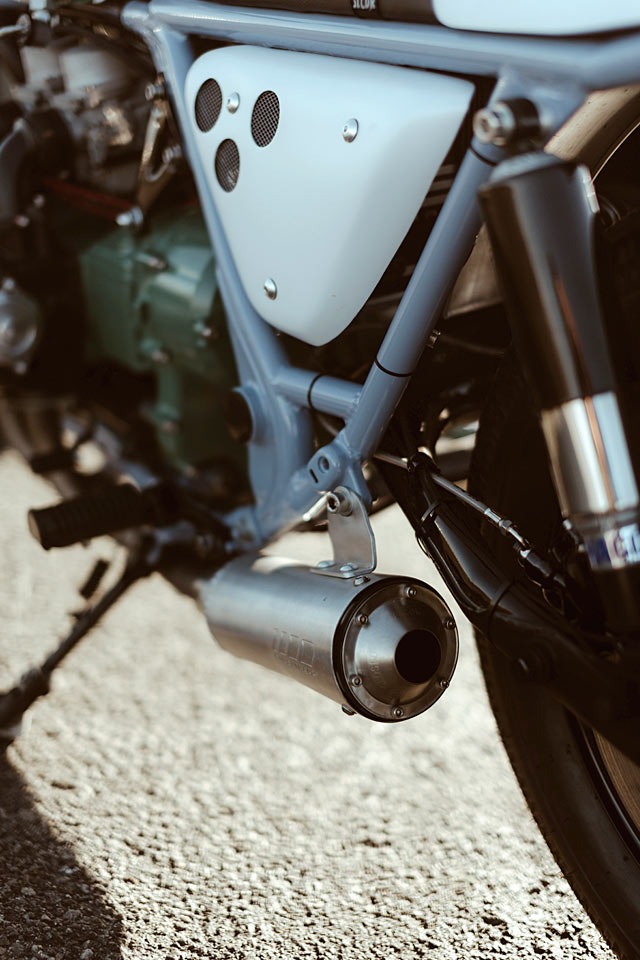 And while Manu clearly loves all of his creation, his focus seems to be on the Honda’s exhaust note. “The sound is very fun; it makes you want to ride the bike again and again. The bike’s classic four flat with this exhaust and air filter? It’s really magic”. 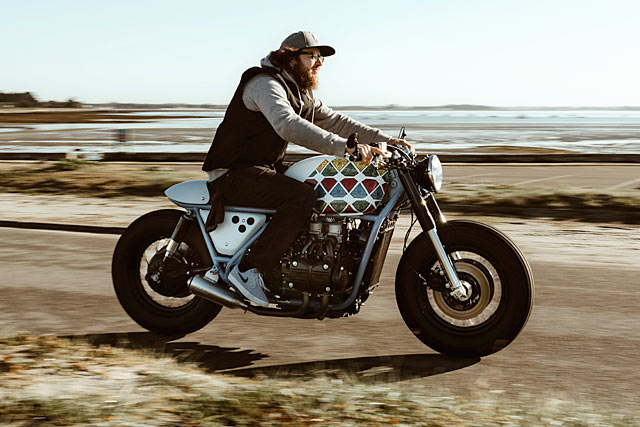 SNAKES AND LATTICE. The ‘Cobra’ Honda XR250 from Argentina’s Lucky Customs
MORE THAN MEETS THE EYE. A Fully Transformed Ducati Tracker From Benjie’s