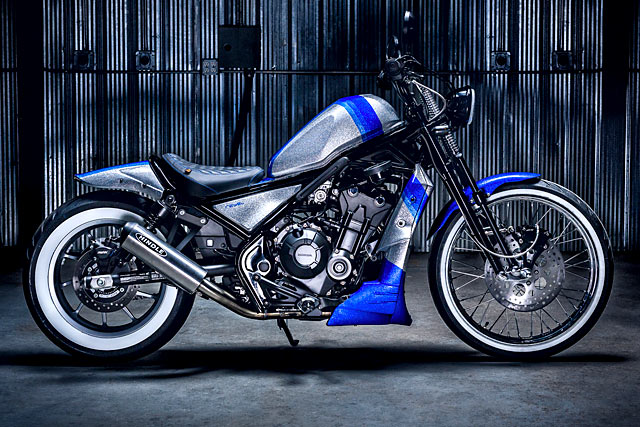 It’d be easy to discount Honda’s new custom-friendly Rebel platform as too little too late from one of Japan’s most conservative manufacturers. Hell, we can almost hear Soichiro San turning in his grave at the thought of anyone but his own beloved Hamamatsu team wrenching on a bike with the company’s full consent. But with an ad campaign expressly asking new owners to ‘make it their own,’ it was only a matter of time before thing started to get a little out there. And thanks to Canada’s Rob Chappell and his Origin8or Custom Cycles, that time is now. 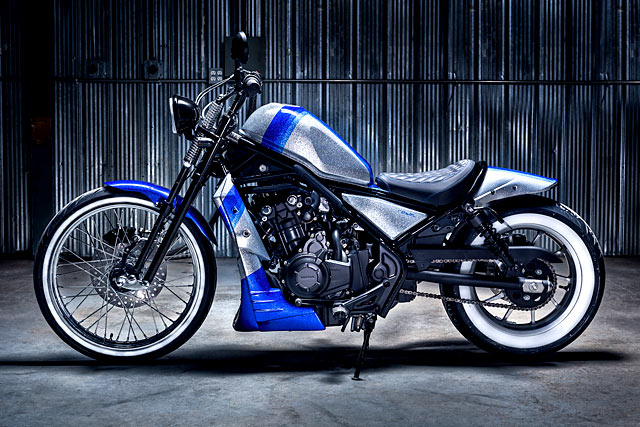 “This bike was commissioned by Honda Canada,” Says Rob. “It’s going to be shown off at ‘The Motorcycle Shows’ 2018 events beginning in Calgary this weekend.  I had done a fair bit of research into the bike’s specs as well as creating a Photoshop mock-up for Honda’s approval before it arrived. Based on the wheels both being 16″, I knew it begged for that traditional bobber look, especially since it already had that Frisco’d-looking tank. I measured the stock front-end height and put a call into TC Bros, who agreed to help out with the springer front end amongst other things”. 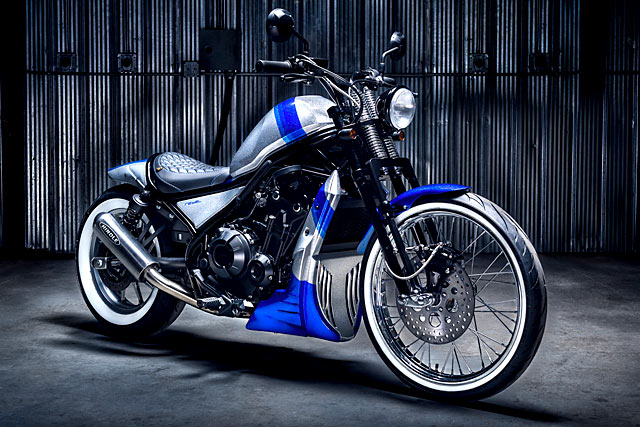 Front end sorted, Rob then turned his attention to the exhaust. Hindle Exhaust’s dyno revealed a ‘whopping’ 38hp at the rear wheel. Hindel’s Scott and Rob worked on the design, finally deciding upon a high-mount style that followed the bikes frame. “I knew I wasn’t building it with a passenger in mind and this by far is the best look for the bike in my opinion,” he says. 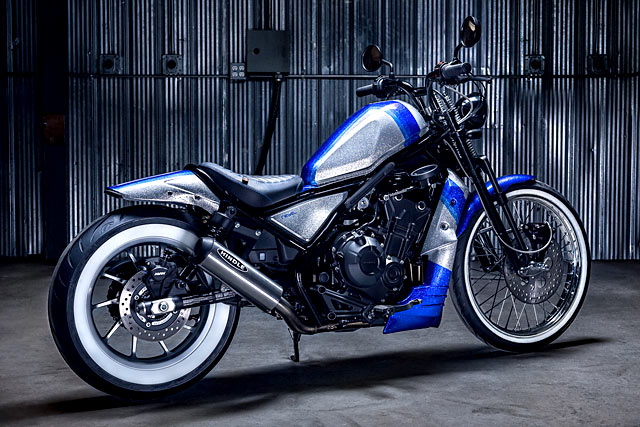 ”I shipped the seat off to my brother at Tuffside and began to consider the paint and other finishing details. I had created the original rendering in greyscale as I didn’t want the folks at Honda fussing over my color choice, but I knew I would be going with a metal flake paint job to achieve the desired old-meets-new effect. I had Chris stitch up the seat in a diamond pattern with deep blue stitch on matte black; we used the stock pan for ease of fitment, but I asked him to carve out the center of the seat so he could build it up and add some softer foam”. 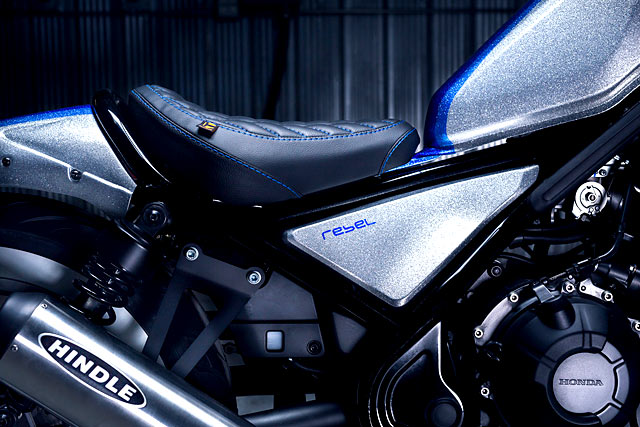 Following Honda‘s ‘Make it your own’ theme, Rob wanted to purchase some readily available parts rather than creating a series of custom one-offs. And with the timing and budget constraints, this seemed like the smartest route, too. “A quick eBay search yielded a large variety of bolt-ons, but the two that caught my eye were the short rear fender with integrated tail light and a chin scoop which helps bulk up the bike’s look significantly”. 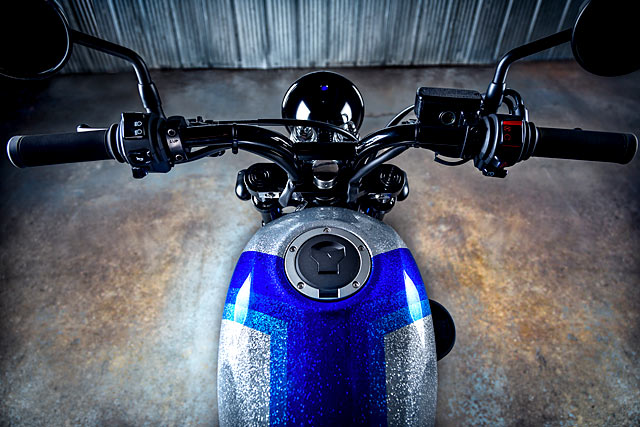 “I ran into some complications with the springer front end, as I had kind of expected. The unit tapers in at the top triple, which is fine if you have an old bike with a single backbone but the Rebel’s frame has two top frame bars that come off the headstock at an angle. This gave me absolutely zero turning as the springer hit the frame. I thought it over and decided to make my own springer back half using only the stock Moto Iron front and springs. I took some measurements and drew it all up on the computer creating a new lower triple, mid spring mount and top triple. My painter Mat Tobin has a CNC mill set up at his home and he agreed to cut it all out for me”. 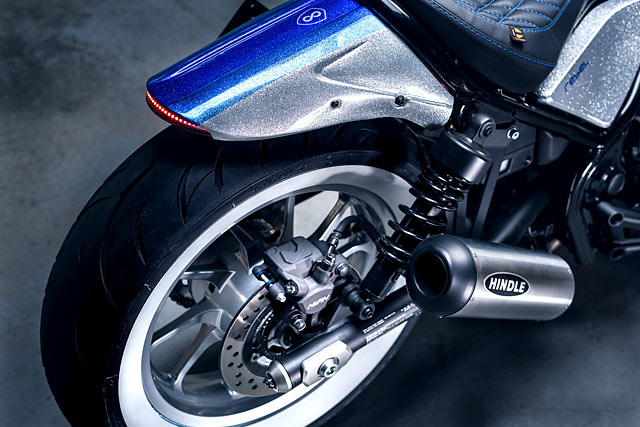 But this wasn’t the last of the front end issues. Hello ABS sensor ring. “I had plans to mount it to the rotor side as with the stock bike, but there was zero clearance with the caliper mount. Then after staring at the rim for quite some time, I finally had an ‘ah-ha’ moment. There was plenty of room on the other side of the hub, so I recreated the ring on my computer and sent it out for water jetting to make it really flat. Next I machined an aluminum ring that would slide over the hub and be held in place with set-screws. This allows me to move the pick up in or out depending on how the sensor reads it”.

“But this wasn’t the last of the front end issues. Hello ABS sensor ring.” 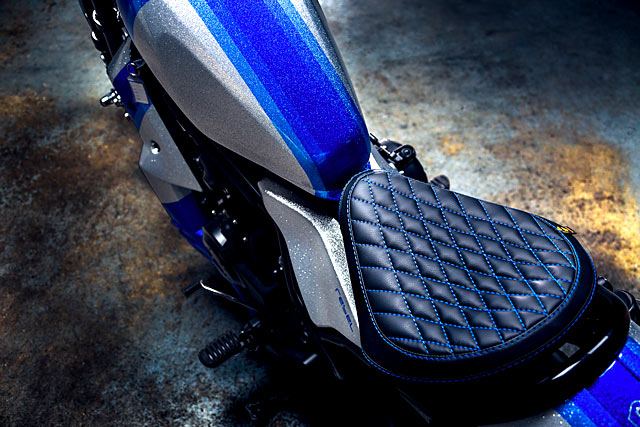 “The forks and rear wheel were then sent off for powder; the front end went gloss black and the rear wheel went chrome so it would look better with the laced front wheel. Following with the retro bobber theme, I went with a white-walled Avon Cobra AV 72/150 rear and Avon AV 71/90 front.

For the paint work I wanted a 70’s vibe, so we hit it all with a House of Kolors silver flake knowing we would lay some candy blue on later on. Once Mat showed up with the tins I got to work figuring out the angles; the tank is a bit of an odd shape and I wanted to break it up as much as possible with some sharp lines to contrast against the bikes original curves”. 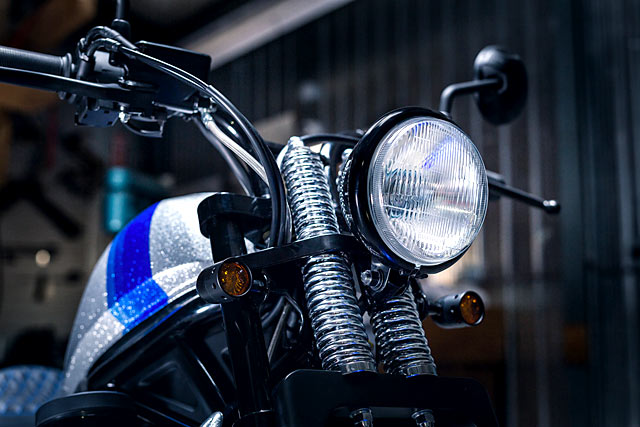 The final step was to add a Power Commander which Dynojet donated to the cause. “In the end the bike gained about 10% in the mid-range. Where the stock bike fell kind of flat, it now pulls steady up to the redline. It’s not a super fast ride but the gains in midrange make it much more street-able around town and a more enjoyable ride overall”. 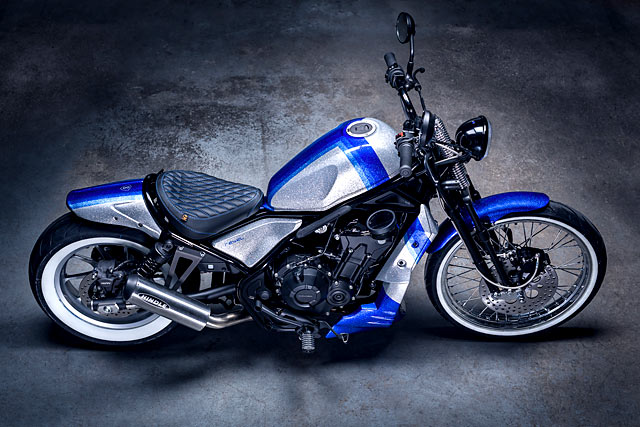 “In North America I know people would ask, ‘why put that kind of money into a Rebel?’ It’s easy when it’s Honda money, but in Thailand these bikes are real heavy hitters. Builders are spending as much on rims and tires as they did on the bike and adding Ohlins and Brembo, too. Check out what they are doing – it’s seriously impressive”. Be sure to watch for it on the Canadian bike tour and on Canada’s ESPN in the spring.