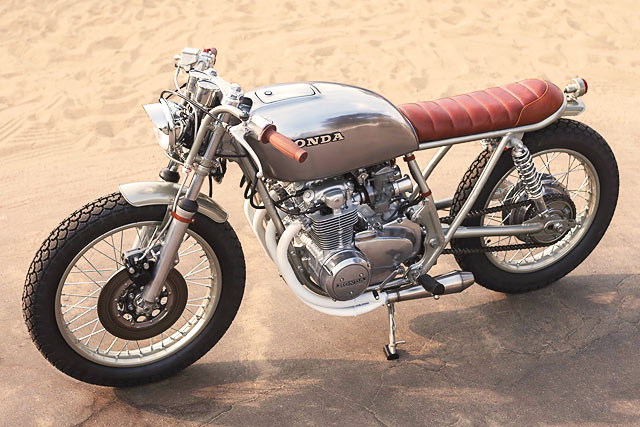 If there’s one thing about this whole moto blogging malarkey that really warms the hemispherical cockles of our big old hearts, it’s seeing new builders go from strength to strength. When it happens, it never fails to put a smile on our faces. So we were chuffed to learn that since we’d last heard from California’s Brandon Nelson, the El Segundo local has gone from garage hobbyist to commercial builder. Here’s his first commission; a ‘78 Honda CB550K he calls ‘Ginger’. 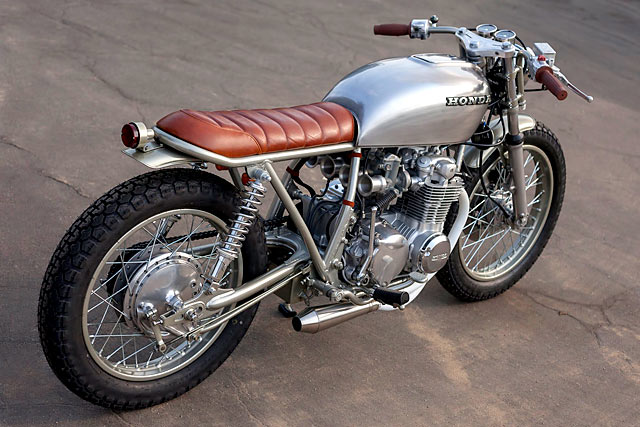 After being featured on Pipeburn and putting Doris (his previous build) up for sale to fund his next project, Brandon was contacted by a guy who was interested in building him a bike. “He saw Doris online and wanted something similar, but tailored more specifically to his tastes,” says Brandon. “Up until this point I had only built bikes for myself, but I’d always had daydreams of wrenching in my workshop for a living, so I saw this as an opportunity to see if I could execute a build for someone on commission”. 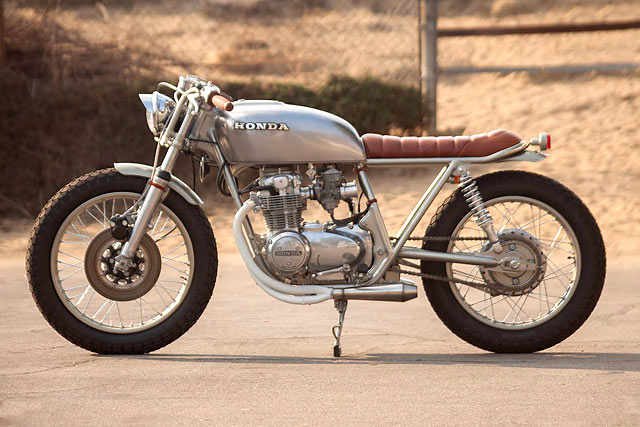 “I met with my client, Pat, to outline key elements of the build, establish a timeline and agree on a price. The brief was simple; he wanted me to build something ‘timeless’. Other details we agreed on were to include some bare metal and to keep it clean and simple; Pat knew he wanted to remove the airbox, replace the tires and shorten the exhaust while keeping a raw metal tank. I knew I wanted to give the bike a few unique features where I could while trying to further obscure the bike’s original era”. 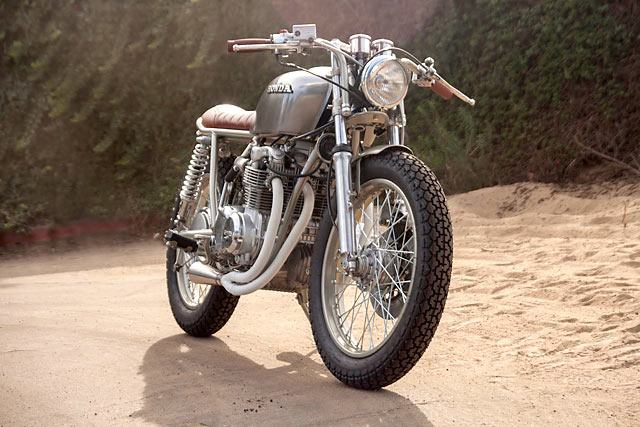 The donor bike was mostly original and only had a meagre 22k miles on the clock; too bad it didn’t actually run. Brandon took a bunch of reference photos and proceeded to mock-up a concept in Photoshop for Pat’s approval. Then the real work started. “I kicked things off by reconfiguring the stock 4-into-4 pipes to a more compact 4-into-2 setup, ending in a pair of stainless reverse cone mufflers. I removed the stock airbox and replaced the filters with raw aluminum velocity stacks. The motor got a fresh top end along with a carb rebuild, rejet, and dyna electronic ignition”. 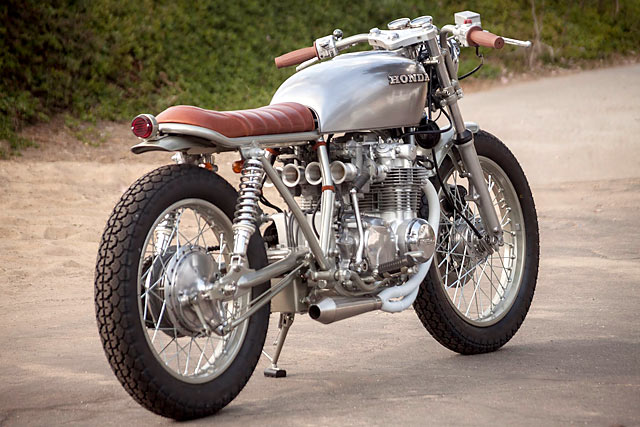 Next, the stock rear frame was removed and replaced with new tubing that would allow the straight line of the tank to continue all the way back through the seat. Then new shocks and shock mounts were added to stiffen up the ride. The seat shape was carved out of auto foam to get the right lines, then shipped off to New Church Moto for the leather work which clearly turned out pretty damn well. Under the seat you’ll find a slim electronics tray that houses the starter solenoid, a Motogadget m-unit and the regulator/rectifier. Look closely below the swingarm to see the custom battery box that houses a discreet Shorai Lithium Ion battery. 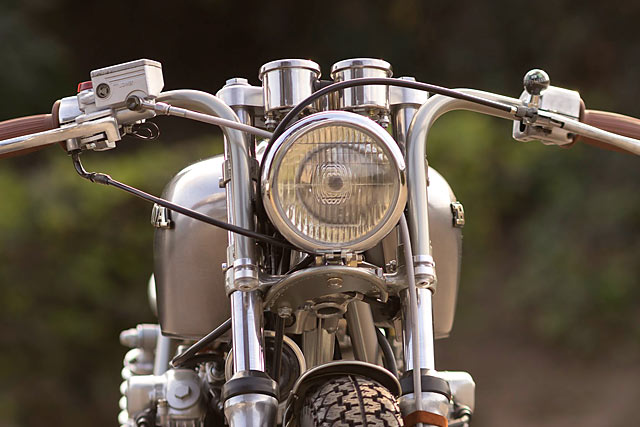 “I knew I wanted the handlebars to be something special – I had been toying with the idea of making a set of adjustable clip-on handlebars. The stock triple clamp was replaced with a CNC version that deletes the old handlebar mounts. I sourced a set of Frisco-style handlebars that had the 90° bend I was after and welded on some fork clamps from an old set of traditional style clip-ons”.

“I knew I wanted the handlebars to be something special – I had been toying with the idea of making a set of adjustable clip-on handlebars”. 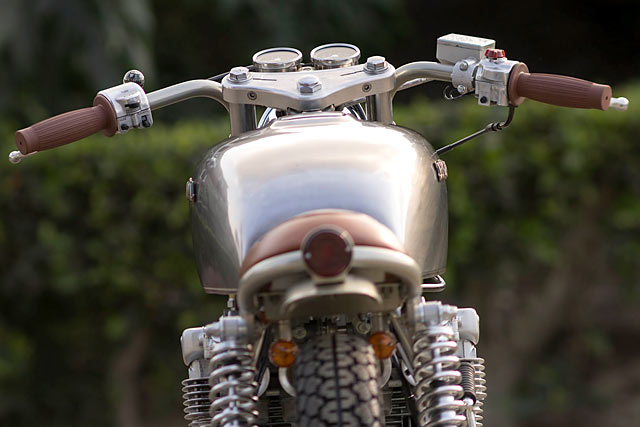 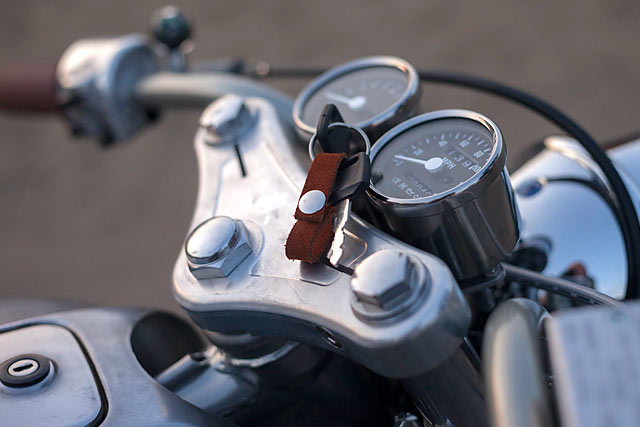 Brandon’s finishing touches made sure nothing on the bike was overlooked. “This was a completely frame-off project where every part was polished, painted, or powder coated. The forks, shocks, and brakes were all fully rebuilt. The wheels were trued with all new spokes and a fresh set of Dunlop K70 tires and the job was done”. 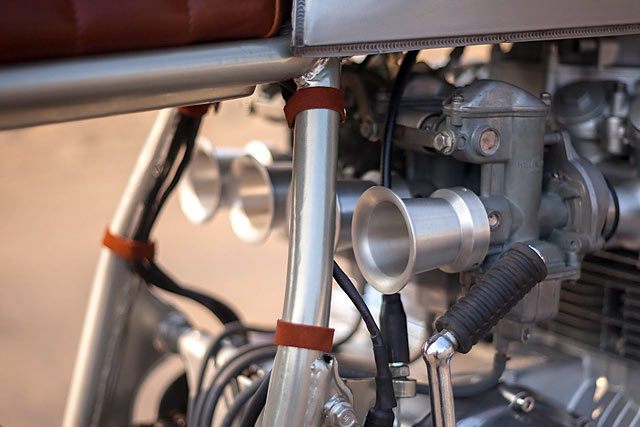 “I delivered the Honda to Pat and he was very happy with the result. So much so that he asked me to build another bike for him. So, am I ready to quit my day job and start building bikes full-time? I have a lot more to learn about fabrication, time management, and budgeting before that happens. This project was a great experience working within someone else’s constraints and proved that I can be creatively satisfied working on projects that aren’t solely for me. I won’t be opening my own shop too soon, but I can still dream”. 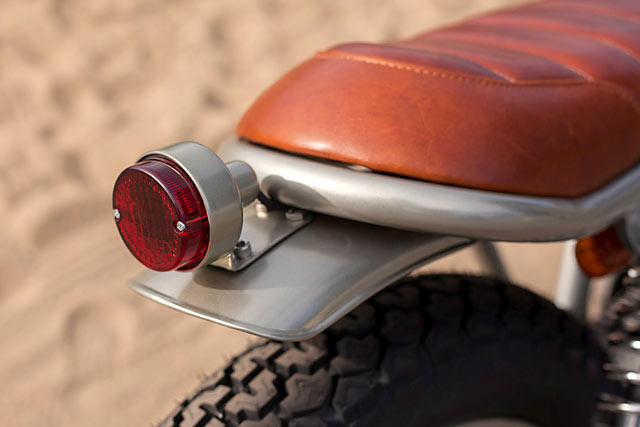