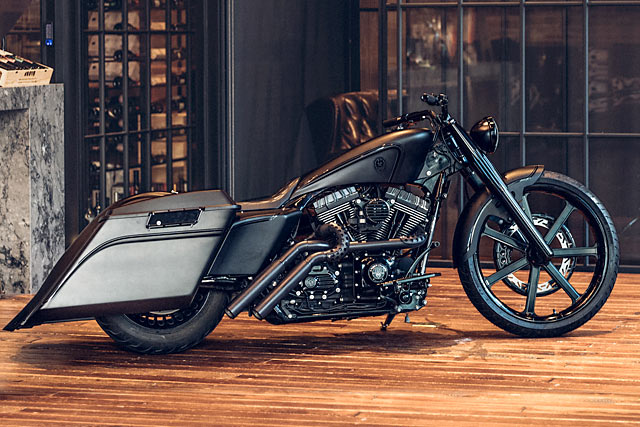 It’s a style of motorcycle so popular that manufacturers have been offering them for years, whole magazines are dedicated to showing them off and workshops around the globe exclusively specialise in their customisation. And yet in nine years of Pipeburn we’ve never featured a single one, and they’ve been totally absent from the ever booming retro revival that has enveloped the entire motorcycle scene. But when a builder as good as Taiwan’s Winston Yeh decided to try his hand at building a Bagger we would have been crazy to resist. Feast your eyes on Rough Crafts’ 2012 Harley-Davidson Road King, a Tourer with ‘tude they call ‘Noir King’. 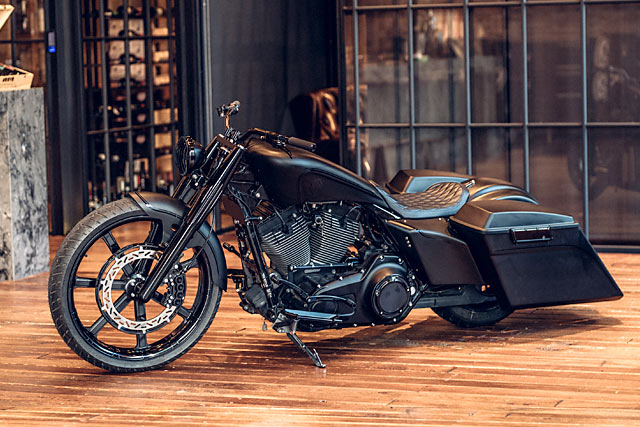 Winston and the Rough Crafts crew have one of the more impressive portfolios in the custom motorcycle scene but the lack of Bagger builds for the Taiwan based shop comes about for one simple reason.“Through all these years, we’ve never built a Bagger and have been asked if we refuse to build one so many times, but it’s never the case, after the success of our Sportsters and Softails, somehow customers who asked us to build bikes never asked for a Bagger,” explains the shop’s main man. The build came about when the world famous customisers, the Ness family, headed up by patriarch Arlen, got to wondering just what a Rough Crafts Bagger would look like. 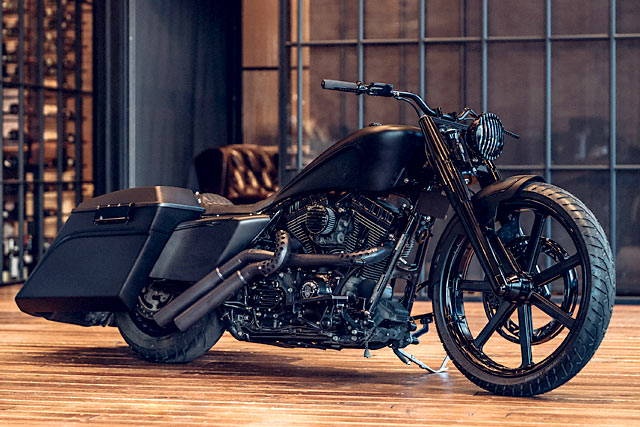 With a huge line of parts in their catalogue for the style and Winston sharing a working relationship with third generation builder Zach it was decided the idea should become a reality. “Their Down-N-Out bag/fender kit is hands down the cleanest and nicest looking bag kit on the market for me, so me and Zach had been talking about when I do build a Bagger it would be only natural to make it a Rough Crafts X Arlen Ness build, as we don’t have many parts for Baggers and they do offer a wide range besides the bag kit, so it challenges me to do a Rough Crafts twist on their world famous parts,” an enthusiastic Winston recalls. 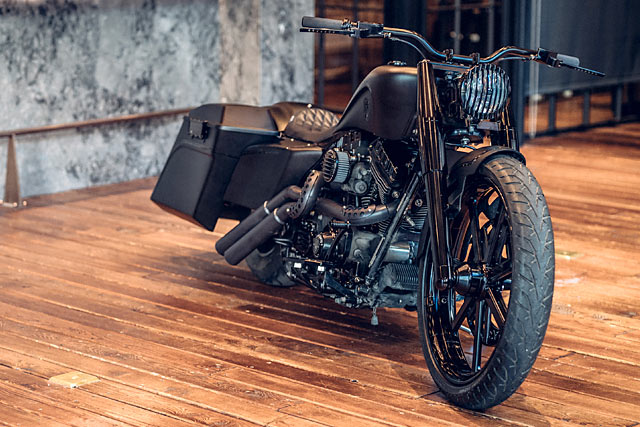 With the 2012 Road King acquired it wasn’t long before boxes of Arlen Ness parts started to arrive and Winston had to decide how much of the Bagger scene he would adopt and what portion of the bike would remain in signature Rough Crafts style. The vital saddlebags are the aforementioned Down-n-Out pieces from the Ness catalogue which are available with multiple exhaust outlet options: dual, single or no exhaust outlets. The choice for Winston was simple, “I always think the coolest look for a Bagger is to have no exhausts coming out, so the bags and fender creates a full ‘skirt’ look from the rear.”

“Winston had to decide how much of the Bagger scene he would adopt and what portion of the bike would remain in signature Rough Crafts style”. 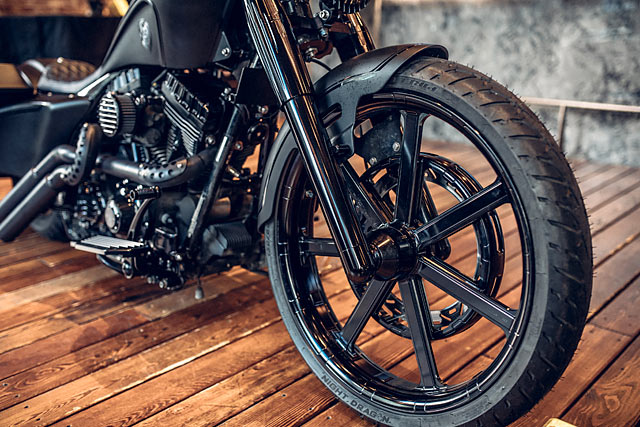 Could have been so wrong, but Winston got it so right

Made from strong, yet lightweight composite material the rear end creates an overall presence in sheer size that few other two wheeled machines can match. While most choose to contrast the huge surfaces areas with chrome accents, Rough Crafts have a colour scheme that’s straight from the Bat Cave and bevelled saddlebag latch covers in black ensure there is no shiny stuff here. To give some balance to the front end an Arlen Ness Wrapper fender was chosen but has been modified in house to create just the right look. Everything in between would be hand fabricated by Rough Crafts in Taiwan and this is where the Bagger takes on their unique style. 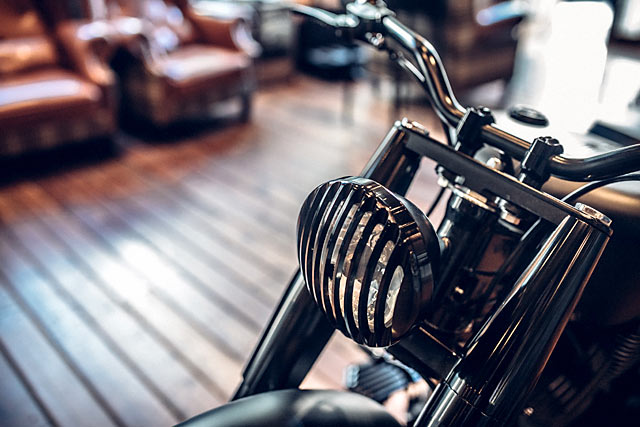 The major component that required crafting was the fuel tank and it brilliantly manages to combine the signature Rough Crafts look while still working flawlessly with the Ness parts. Its a much longer and larger tank than the team would normally be required to fabricate, its broad shoulders flow like a woman’s body back to a slim waist, with the bags the perfect hips. The stunning metal work features long and sleek knee dents and is topped off with one of the shops own machined gas caps. The seat was also made in house, the generously portioned diamond stitched black leather item provides the perfect junction between Ness and RC, while giving excellent support for long days in the saddle. 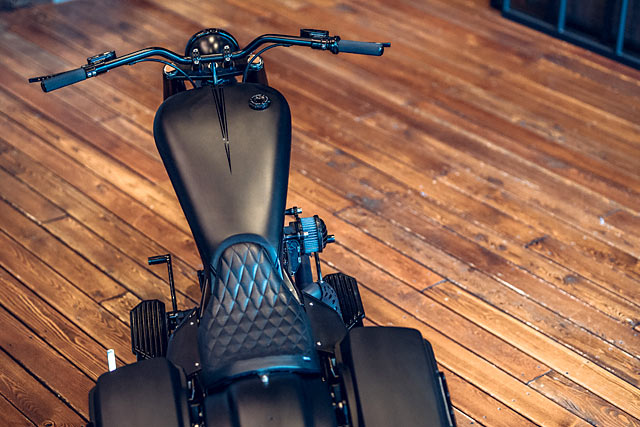 Sons of Anarchy never had it this good

The Harley’s matte black paint work is back again with the task falling to Air Runner Custom Paint Studio to cover the substantial Baggers size. While the graphics that help accentuate the sculpted curves of the body work were applied by Rough Crafts themselves. But there was still a long way to go on the Bagger build and the family Ness would provide many of the parts to come. An Arlen Ness raked triple tree setup for the front is taken from the Softail part of the catalogue to give the stretched look without going overboard. Further down the progressively sprung forks, Arlen Ness Hot Legs create the single 15in disc/dual caliper finish with RC’s own FAT/FIN fork covers. 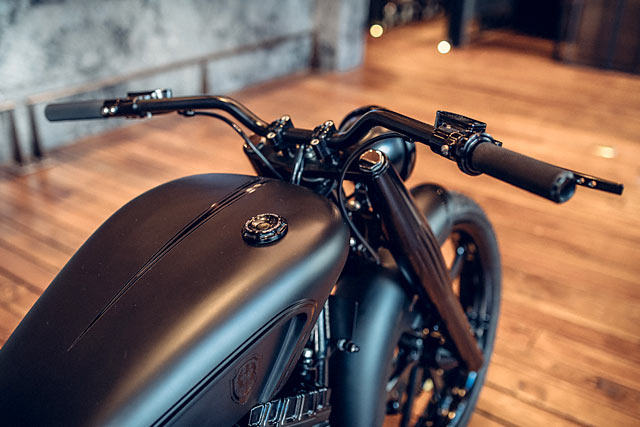 But the standout feature is clearly that big front rim, although Winston explains this was actually the conservative option, “instead of going for the trend of the bigger the front wheel the better, we decided to stay with a 23″ front, looks more balanced for the whole bike.” The wheel itself is an Arlen Ness bevelled, blacked out 23×3.50″ wearing a Pirelli Night Dragon 130/60-23″ tyre. The stock 16” rear is maintained, although painted the same colour as the Ness item and gets a Pirelli Night Dragon 180/70-16″ to suit the Bagger kit. Making it sit like a low rider and still get up and boogie is a Legend Air Ride system that replaces the standard rear shocks. 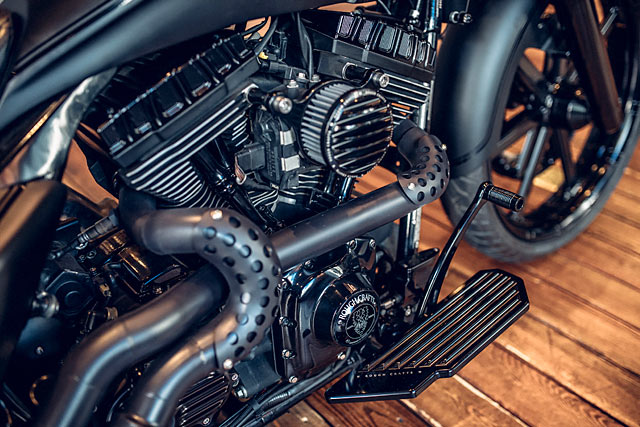 Powering Noir King when it raises its rear is a HD 96ci Twin Cam motor that’s been dressed up and murdered out. The Arlen Ness catalogue provides covers for the Rocker tops, lifter blocks and primary drive. While the timing cover was made at Rough Craft even the dipstick is from the Arlen Ness bevelled range. To give the motor some extra pep Winston made a Rough Crafts air cleaner that utilises a Sprint filter. But the real bark comes from the custom made exhaust system, twin pipes designed to clear the rear boxes with punched heat shields for a trouble free ride. A Performance Machine hydraulic clutch slave finishes out the driveline that runs through the stock HD 6 speed. 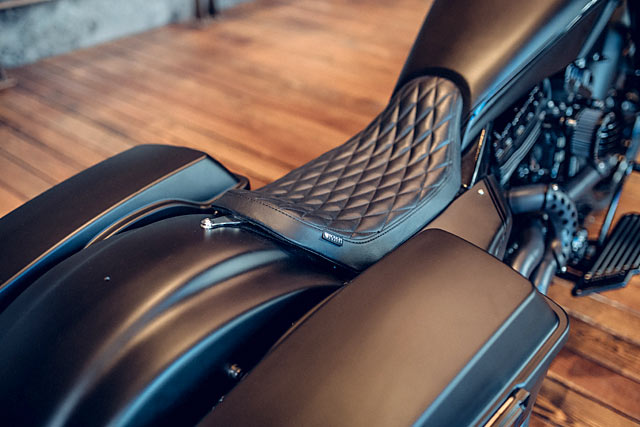 Keeping the rider locked in place the Rough Crafts floorboards give the real Bagger look and line up neatly with the new foot controls from you guessed it, Arlen Ness. Handlebar height was one of the crucial selections for the visual impact of the bike and modified RC fighter bars keep the things low and lean. This theme is continued with no large front fairing as is common for the style, instead all of the lighting is from Rough Crafts own supply. While the switchgear and controls are the most minimalist items Winston could find from Ness and Performance Machine.

The finished Harley is one of the most bad ass bikes you’re ever likely to see, a Bagger so good it looks like Batman should be riding it! Which is exactly what it was going to take to get such a bike on the Pipeburn pages, but when you combine the genius of Rough Crafts with an open Arlen Ness catalogue the results were always going to be insane. 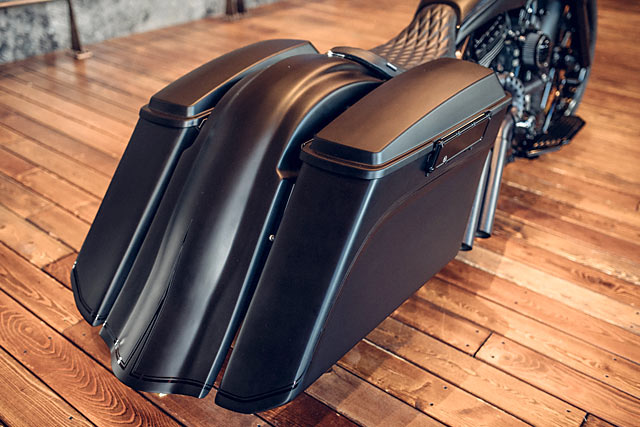