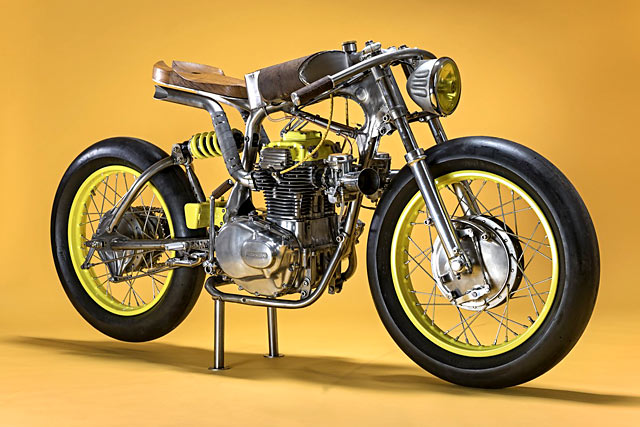 When Austria’s Titan Motorcycles first set up a workshop, they stuffed their storage area with a collection of rusted-out motos they’d collected from the 70’s and 80’s. And in the years since they’ve been wandering through, vulture-like, picking interesting bits off for use in their custom builds. But this time around they’ve dragged out a whole motorcycle, a clapped-out Honda CB350 they’ve turned into a wacky racer dubbed the ‘One’. 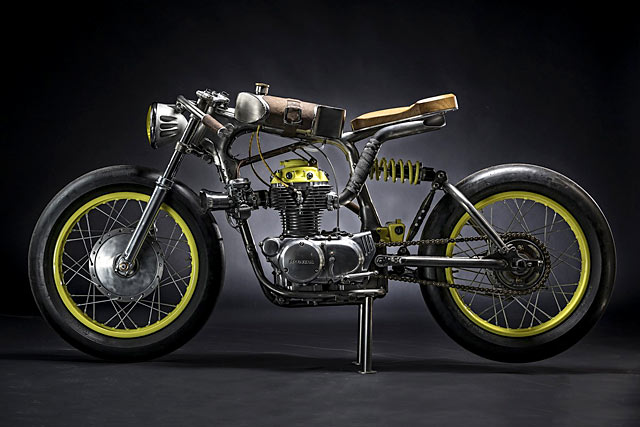 The donor for ‘One’ was typical of the of the bikes the team had set aside – an oil-stained Honda engine in a sad looking frame with pimped out forks and rusted wheels. The whole process, from when it was first rescued from the bike graveyard to its final form you see today took over two years, with the two man team of Tom Possod and Michael Siebenhofer approaching the project with equal parts ingenuity and good humour. 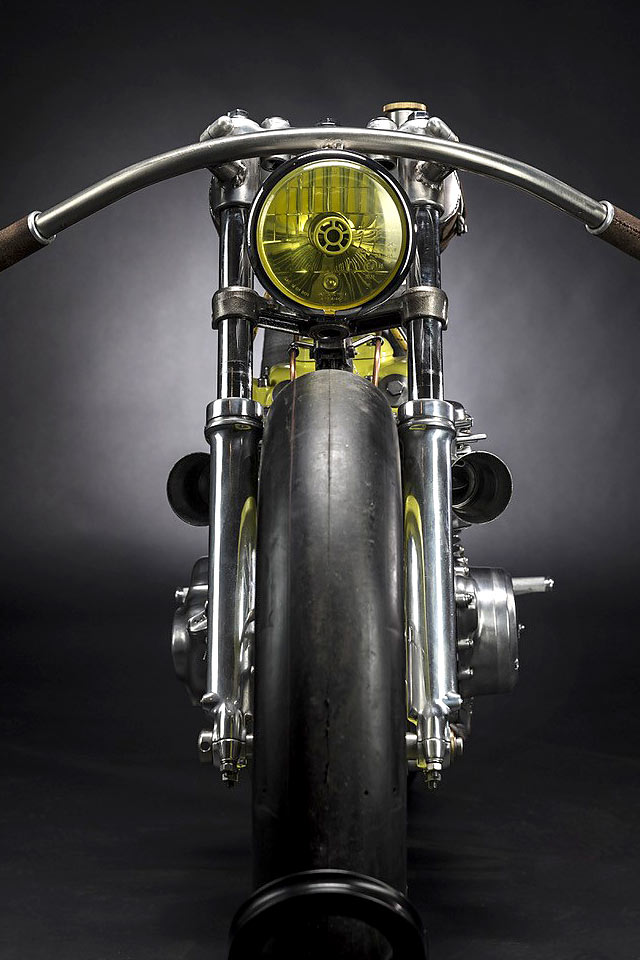 The concept for the build itself was inspired by a long love of racing motorcycles from the 50’s through to the 1970’s. ‘I’ve never had enough money for a proper racing bike from this period,’ Michael says, ‘so I’m compensating with this Honda build’. That racing DNA runs deep, with Michael making an early decision to leave much of it unpainted. ‘It was clear to me there had to be no paint. Paint is mass, whether it be sprung or unsprung,’ he says, with barely a straight face.

“It was clear to me there had to be no paint. Paint is mass, whether it be sprung or unsprung.” 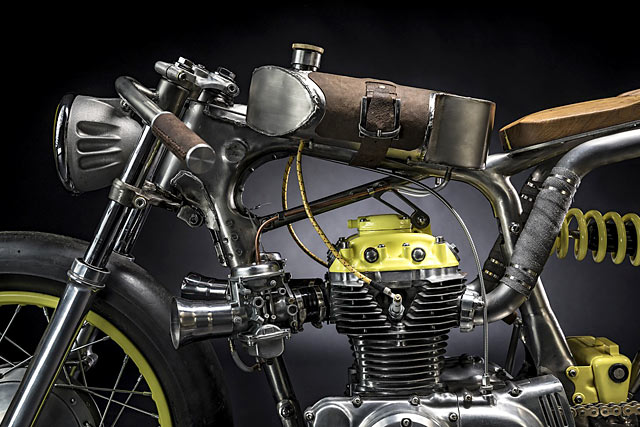 The Honda’s suspension was next to get altered, with the team realising that most modern racing bikes run horizontal shocks, so they modified the CB to match. ‘Why not?’ shrugs Michael. At the same time the front was lowered and spring rate increased. And that seat? Yes, it’s wood. Is it comfortable? ‘Don’t ask stupid questions,’ Michael replies. 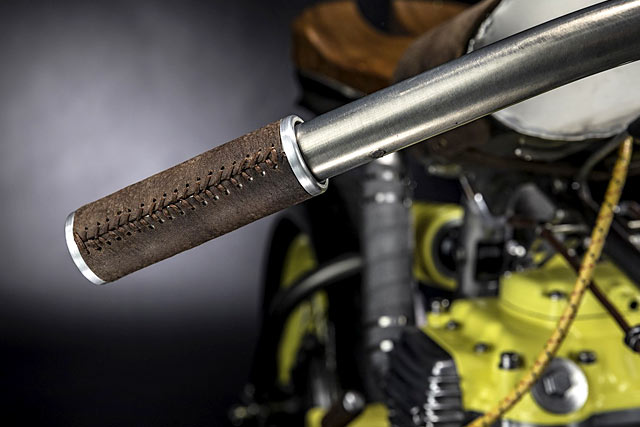 That seat actually came about after a discussion with another bike builder, Rudi Garnweidner, who went hunting around for the right type of wood to match the bike. They eventually settled on olive wood, with some yellow epoxy run through the grain to match the highlights on the bike. It’s actually a neat little piece, hollowed out to take all the components that make up the simplified wiring loom. 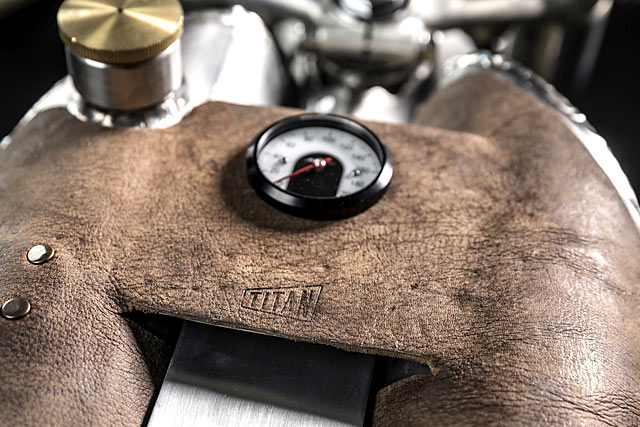 But the wooden seat isn’t the strangest thing about this racer – it’s the cylinder head. It now faces backwards. The whole assembly has been spun 180 degrees so the carbs now sit at the front and the exhausts run directly out the back. It took a hell of a lot of work to do. The timing chain needed to be adjusted, a new cam needed to be ground and oil lines needed to be rerouted. ‘Why’d did I do it?’ Michael asks, ‘Because I can’.

“But the wooden seat isn’t the strangest thing about this bike – it’s the cylinder head. It now faces backwards.” 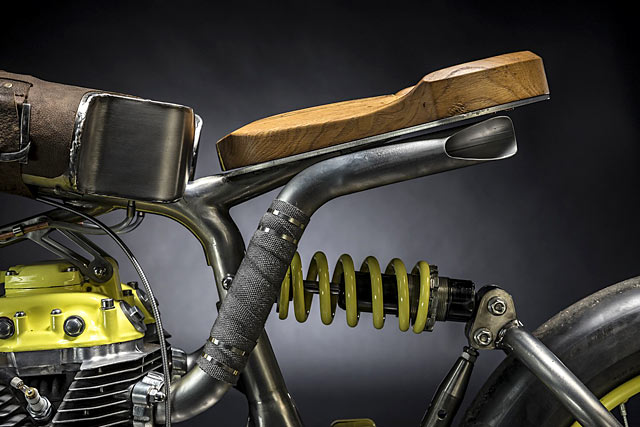 Can’t argue with that. Other aspects of the build are more conventional, although the attention to detail and quality of components is impressive. The ‘One’ runs a Motogadget speedometer, LSL footpegs, an internal throttle cable assembly, a gorgeous headlight from EMD and a steering damper taken from a Triumph Street Triple. Much of the metal work, including the fuel tank, is made from Titanium, and finished in with a layer of clear powder coat. The bike runs VeeRubber racing slicks on both ends. 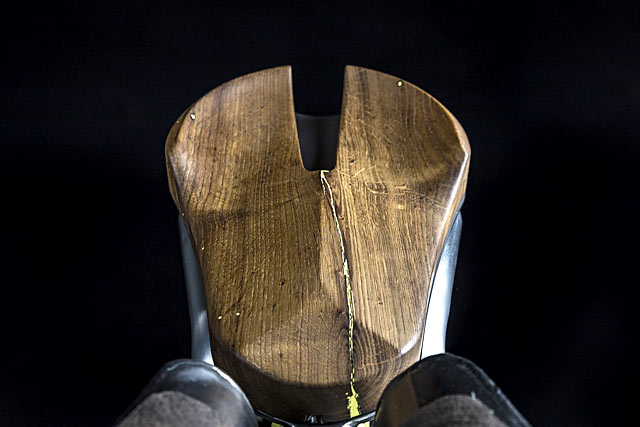 Seat is made from antique olivewood 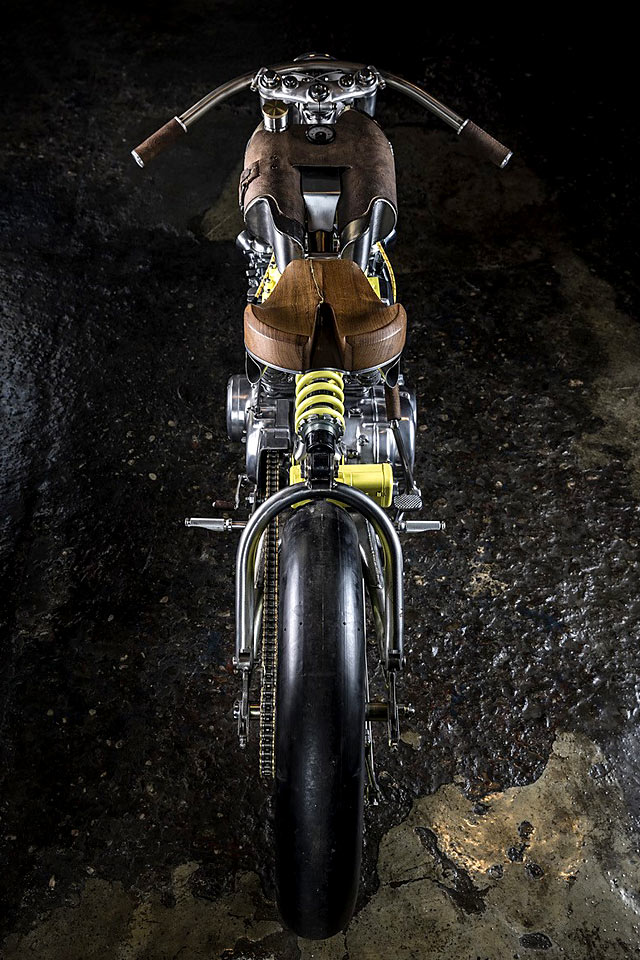 Titan Motorcycle’s ‘One’ racer is a build that’s equal parts excellent fabrication, quality components and Austrian insanity that’s somehow works incredibly well. This Honda is one of those motorcycles that’s equal parts in-your-face and subtle at the same time. We can’t wait to see what else they’ll drag out of the storage shed next. 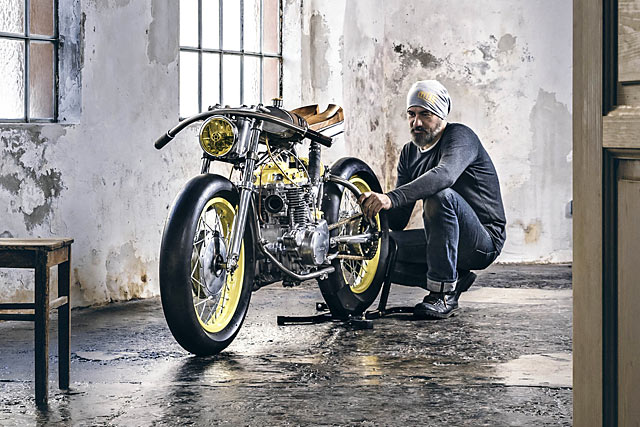