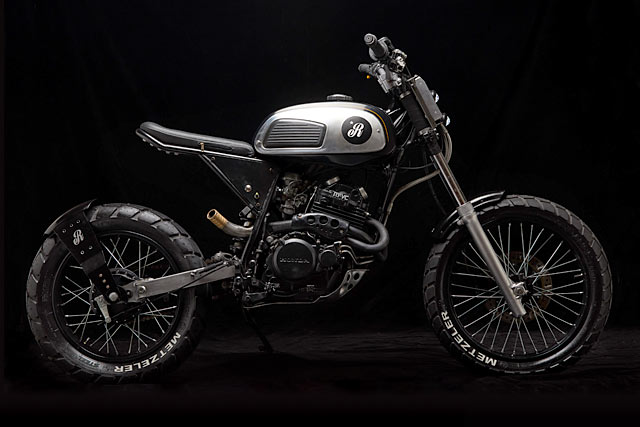 There is something about the bond between childhood best friends that is impossible to break and for many, they’re the greatest years of life. You don’t need much, just the free days of the holidays, that one best friend and the smallest things will entertain you. As the quote goes, “we didn’t realise we were making memories, we just knew we were having fun!” While most get all serious about things and leave those years behind, two friends from Cordoba, Argentina decided why not keep them going and make motorcycles as their memories. Together Franco Loson and Carlos Sartor are Republica Motocicletas and their latest adventure is a crazy cool 1994 Honda NX350 Sahara they call ‘Old Power.’ 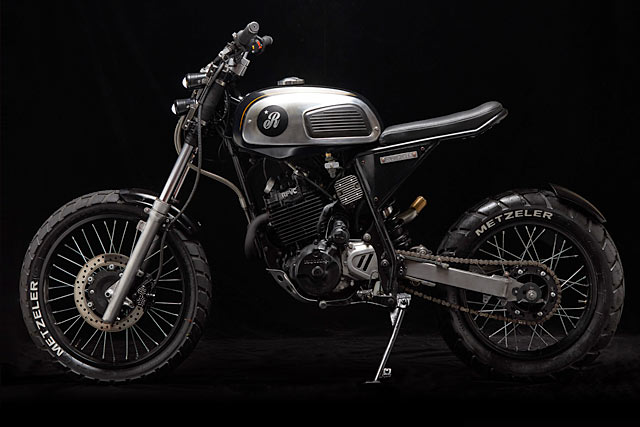 Having been in operation for just three years they’ve hit the ground running with fifteen full custom builds already completed and the team is rounded out by Mauro Sartor and Lucas Versellon. Word travels fast and there is a backlog of orders to be worked on as they try and balance building both their own creations to be sold on completion and bikes by customer request. So how does Franco describe this Honda build?  “When creating this bike we seek to achieve a unique motorcycle in its type, I would call it a futuristic scrambler, it is a motorcycle that when people see it, they do not know what the motorcycle is about and it arouses all kinds of reactions and emotions.” 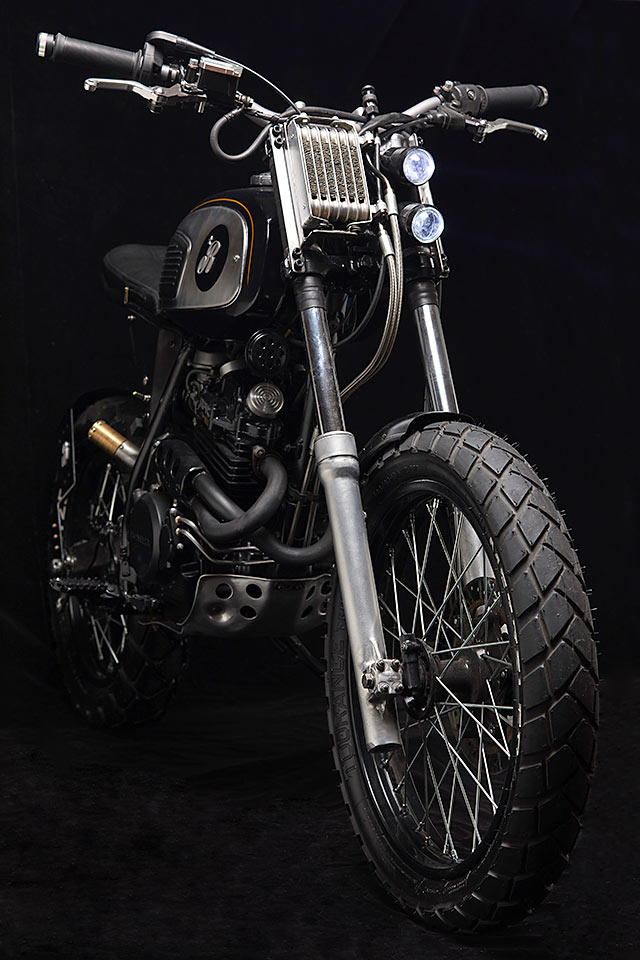 This is the attitude to all bike builds at Republica Motocicletas, there are plenty of shops doing things the conventional way and even the owner of this Honda had an eye on building a traditional custom. But as the boys began the design he was quickly won over and he too fell in love with the unorthodox way in which they work. You see the team don’t design a complete bike, they start creating individual parts to match the overall theme and then seek to bring them together in one homogeneous creation. 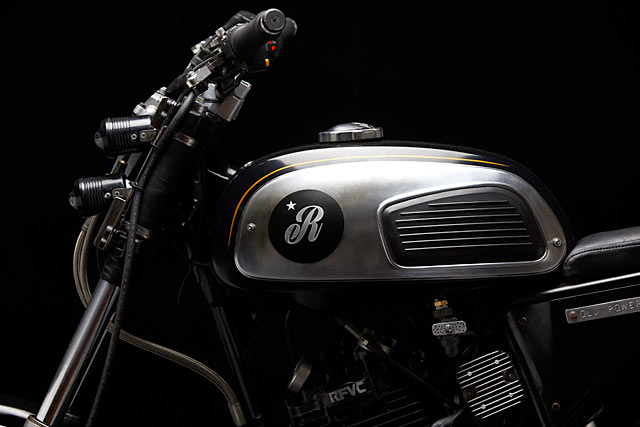 The first of these pieces is the beautiful ’65 Jawa fuel tank that has been heavily customised to fit the Honda NX backbone and get the right look. As a replacement for the ’80s designed plastic piece it couldn’t be better and set the tone for a stripped down machine with features old and new. Classic knee pads give the authentic trials touch while the raw metal finish set off by the Republica logo leaves no doubt as to just who built this Honda. Its all finished off with black paint work for the perfect contrast while a hand applied single pinstripe is the cherry on top. 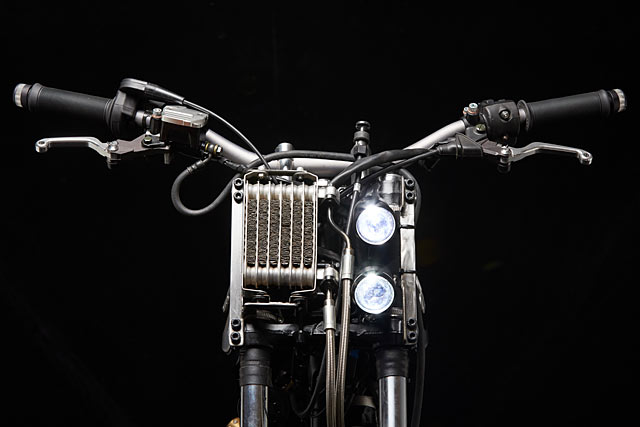 Removing all the Honda NX Sahara’s plastics left an exposed square headlight sitting out in the wind like the proverbial dogs bollocks. This would never do and offsetting the Jawa tank for a future feel comes in the way of twin LED projector lights. But much bigger plans were afoot with the decision made to tidy up the engine area by remounting the oil cooler like a number board. A reworking of the outlets, new braided lines and some clever mounts and not only is a unique aesthetic acquired but you couldn’t possibly hope for better airflow.

“Removing all the NX Sahara’s plastics left an exposed square headlight sitting out in the wind like the proverbial dogs bollocks.” 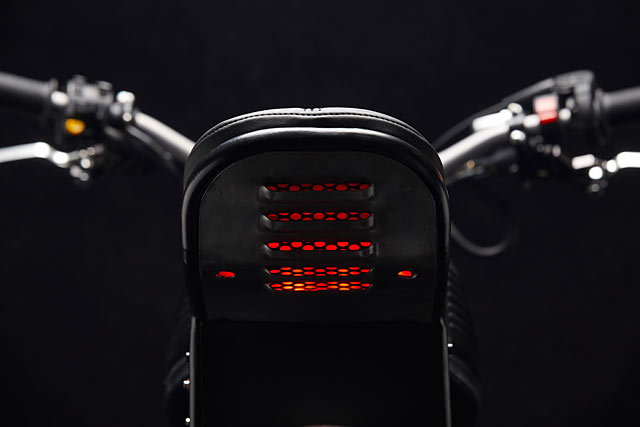 With the front coming together so well and offering a feast for the eyes, it was decided the rear would take on a more understated look. But that doesn’t mean a few clever tricks wouldn’t be applied, first however the grinder came out to hack the back end off. In its place is an all new steel subframe designed to drastically shorten the machine and conform to the new lines. The old leather looking support gets a distinctive stitch pattern on top, the zipper provides a utilitarian look and a place for your iPhone. But it’s underneath where the party happens, LED tail lights hidden behind a meshed out steel panel. 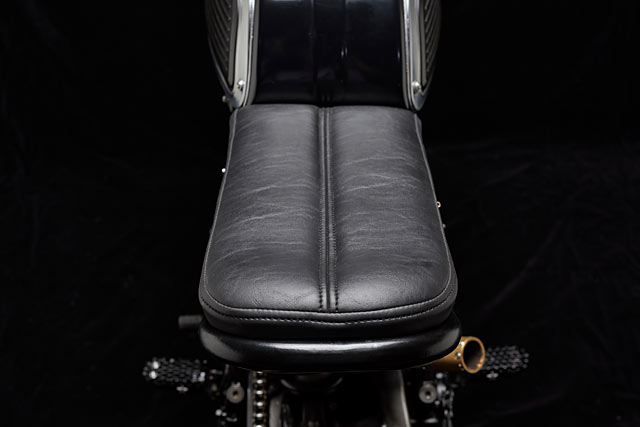 To finish off the Honda’s rear, the no fender haters have been appeased with a hand built rear guard in the floating style of Ducati’s Diavel cruiser. Another Republica logo was cut with counter sunk accents and some brass to match the features to come. To fill the gap created in the body by the new subframe a pair of side covers were cut, but their simple look defies what lies beneath. Not only do the electrics get hidden there, so do some of the rear brake componentry and for extra measure there is even a USB charger! 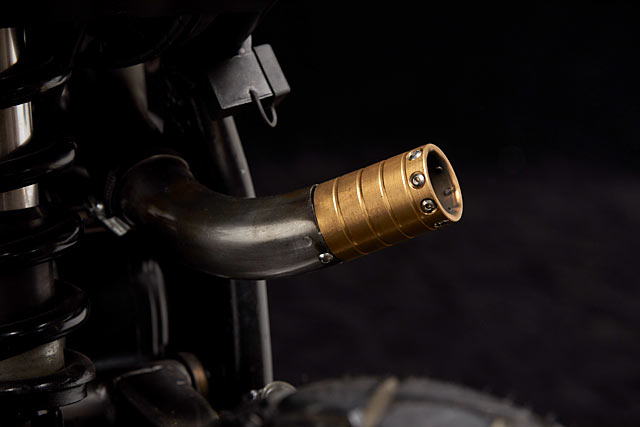 “We seek to create a unique motorcycle that is futuristic and practical at the same time, allowing the user to use it both on the road and in the mountains, we sought to achieve a motorcycle that blows people’s minds when they see her on the street,” explains Franco. That mix of practical and artisan brilliance extends to the engine with in house machined alloy details transforming the look of the understated single. The custom exhaust system is a far cry from the Honda factory item; instead of finishing out with a huge rear can uses three piece headers and a bronze machined end cap. 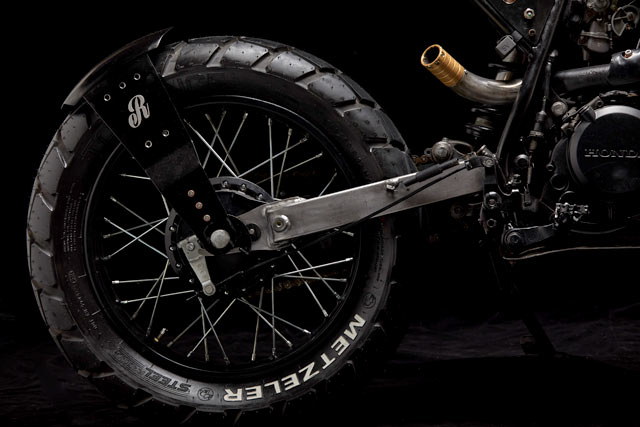 And the Honda factory brakes and suspension have all been overhauled to ensure perfect operation and the swingarm sanded for a more industrial feel. To reduce the sheer amount of chrome coming from the stanchions they’ve been cloth wrapped in black. Above sits a set of competition off road bars decked out in all the goodies a rider could desire. A set of shorty adjustable levers, new comp grips with LED bar end signals and even the master cylinder cover gets a machined cap so it doesn’t feel left out. The off-road look is complimented thanks to bear trap pegs with more company logos and a bash plate to protect the engine. 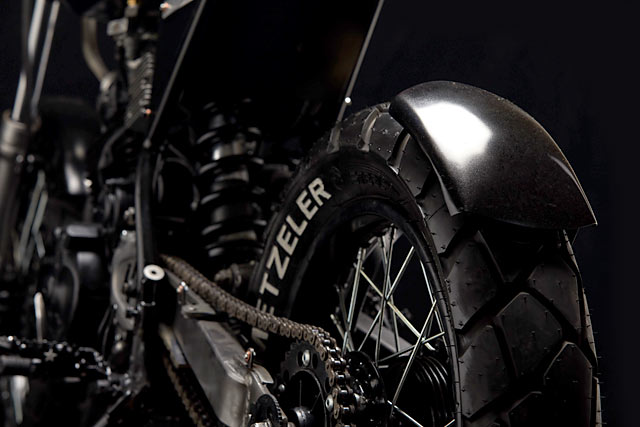 The final step was to lace up the factory hubs with all new rims using stainless steel spokes for added quality and longevity. While the wheels are all wrapped up in Metzeler Tourance rubber for the perfect on and off road tyre experience. The owner is rightfully thrilled with the end result of five month‘s hard graft, so too the team of four friends that made it all happen! “What we like most about OLD POWER, is the aesthetics that we achieve at the end. When we saw the bike finished we realised that there is no detail left at random, every detail has hours of work and design.” A process that has already started again as the next lucky customer has their bike given the best friend feel of Republica Motocicletas. 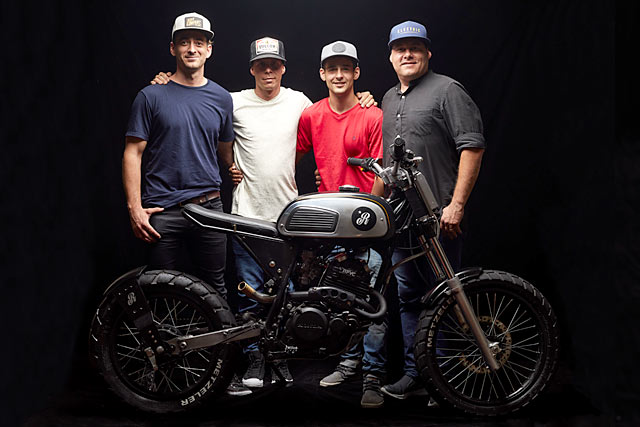