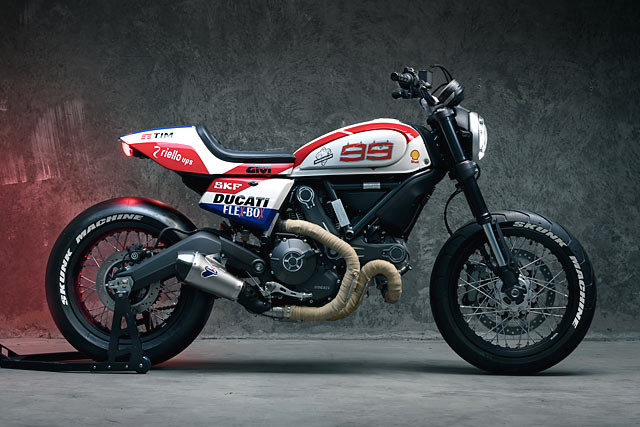 Esoteric arguments about a custom bike’s relative merits are all good and well, but as we all know it always comes down to the same old fact that there’s no accounting for taste. I like red. You like blue. The rest is mere conjecture. But all bets are off when you own a bike signed by Jorge Lorenzo; how can you possibly argue against that? And with a Ducati racer like this from Melbourne’s Skunk Machine, why would you want to?

Skunk Machine was born in 2015 and has steadily grown over the past few years. “I am selective of the projects that I take on, as I am only one person,” says business owner, Carl Cerra. “I make sure I can focus on each project as if they are my own personal bikes. I have worked in many Automotive Design Studios around the world for almost 25 years and I apply many of the techniques and the experience I have gained on my bikes. There’s is a huge difference between ‘Custom’ and ‘Design’;  I try to make my work look as though it was rolled out by the factory. Simple, clean and refined.” 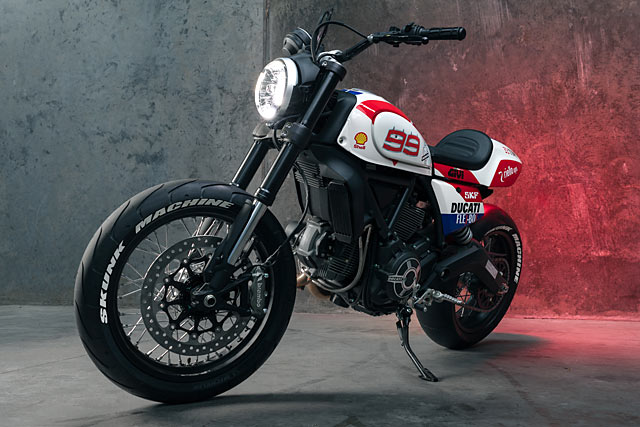 “Mate. Can you do something shit hot with this? I want to show it off at my bar.”

The bike was brought to Carl by a long-time customer and good friend Anthony. Opening a bar in Albury in March 2018, his brief to Carl was as Aussie as it was succinct, “Mate. Can you do something shit hot with this? I want to show it off at my bar. I want something racy.” “Of course I said, “F#$@ yeah,” chuckles Carl. Hey presto, the perfect Aussie response, too. 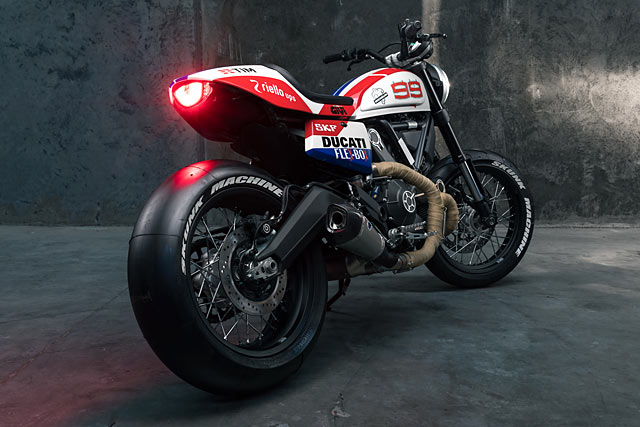 “Due to the fact that it was a sports bar and Anthony is a Ducati fan, we decided to make a MotoGP-inspired bike. We had a few beers and a brain storm, then decided on a budget.” Now clearly, Anthony is quite a resourceful gent. After a few emails and phone calls, he’d somehow arranged to have Jorge Lorenzo sign the bike’s tail at the Melbourne MotoGP last November. “We were invited to his trailer and we showed him my renderings. He seemed to like the design and was kind enough to sign the tail for me. We hung out for a while then went back to watch the racing.” As you do… 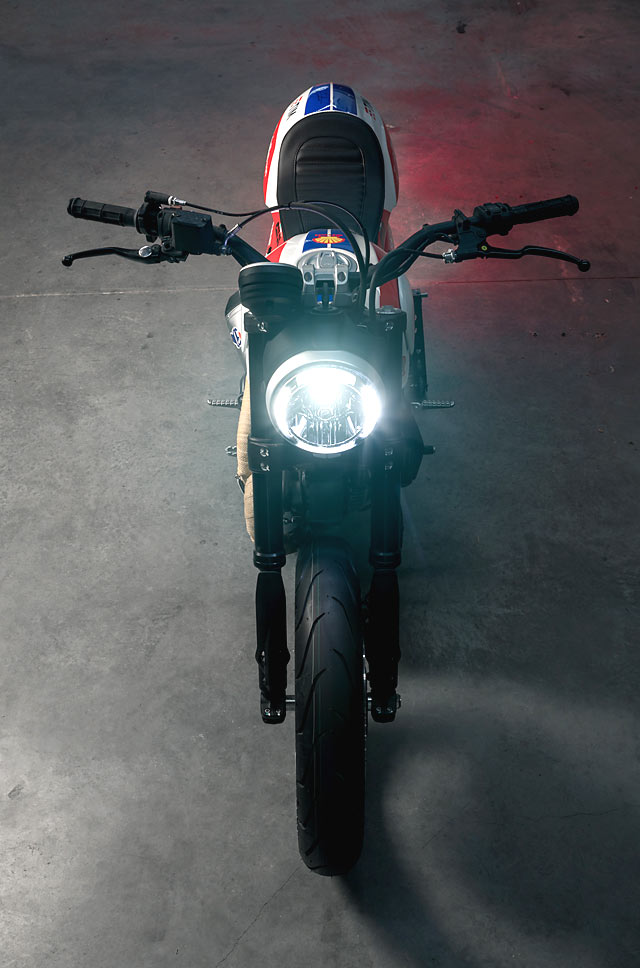 “I began with a series of detailed sketches to get the Ducati’s graphics right. We decided to delete the Indicators, chop off the rear sets and wrap the pipes. Once I was happy with the plan, I began the bodywork and started thinking about how exactly the decals would be done.” 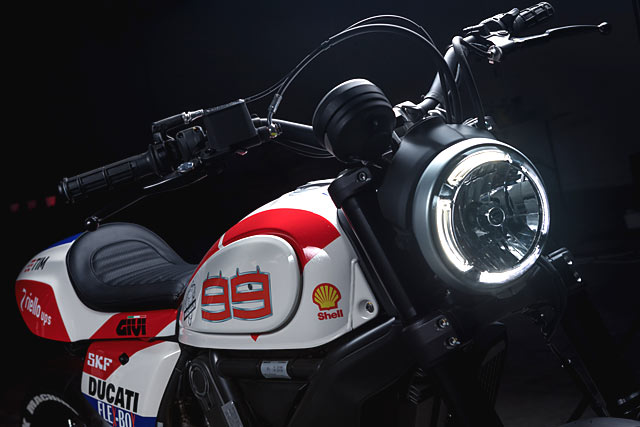 The four piece kit that was used to transform the Ducati is one that Carl designed a couple of years ago and subsequently made production moulds for. “It comes with the double-skinned seat cowl, the upholstered seat, two side covers and all the required locking hardware. If you look at my website, you can see the design and clay modelling process that I used to create it. We also got permission to use all the racing logos, so I got them printed and cut. Once they were stuck in position, I carefully sanded around the signature and sealed it and the logos with a final coat of clear.” 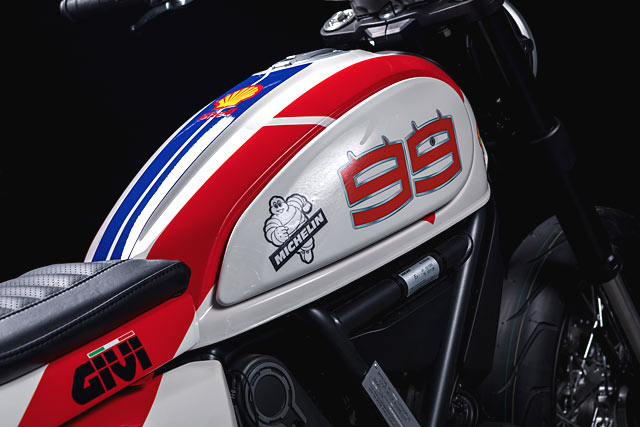 “It wouldn’t be a ‘Trackster’ without a slick on the rear, so I swapped out the Pirelli for a 190×17″ Michelin slick seeing they are also a Ducati GP bike sponsor. Unfortunately you can’t get an 18″ front slick, so I chose to go with a Michelin Scorcher. I think the tread pattern works well for this build. I also added some real rubber tyre lettering I had made up to make sure everyone at the bar knows who built it.” 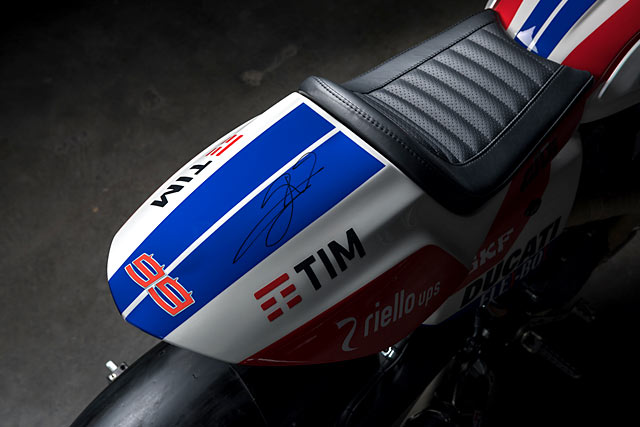 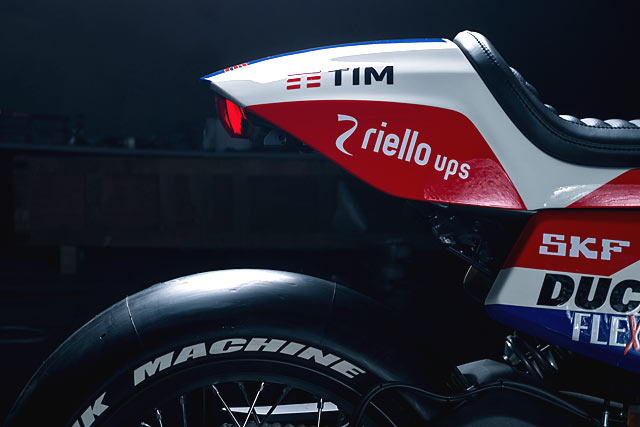 “I guess the hardest part of the build was trying to arrange Jorge to sign the Ducati’s tail piece,” notes Carl, with a wry smile. “The thing I like best about a build was the the reaction from Anthony. Most of the time, customers can’t really visualise the final product until it’s sitting in front of them all shiny and new. I pray for a big grin… once that appears, I can breathe again. Thankfully he loved it; I can’t wait to see it at the bar.” Here’s cheers to that. 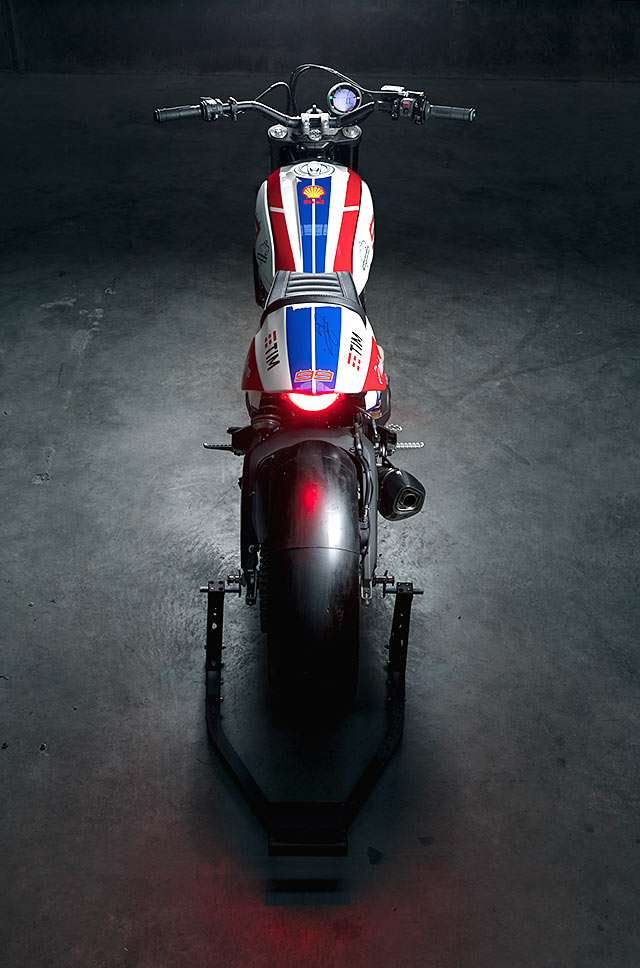