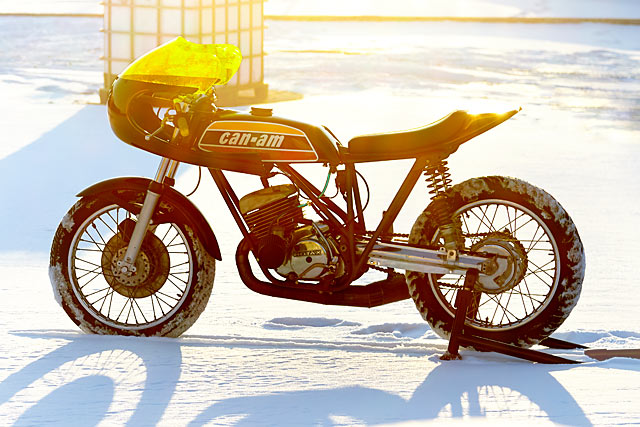 The custom bike scene, like pretty much everything else in life, has trends. Right now it seems to be BMW boxers. A while ago, every second bike we received was a CB Honda with Firestones. And back when we first started, SR Yamahas were all the rage. Now these trends come and go, but there’s one thing that we’re pretty damn sure of. It will never be the turn of the Can-Am Enduro in the lime light. You’d be hard-pressed to think of a more obtuse, esoteric bike if you tried. Which is exactly why we love this custom racing Can-Am from Cleveland’s Chi-Jer’s Vintage Bike Works. It just doesn’t get any more unique than this. 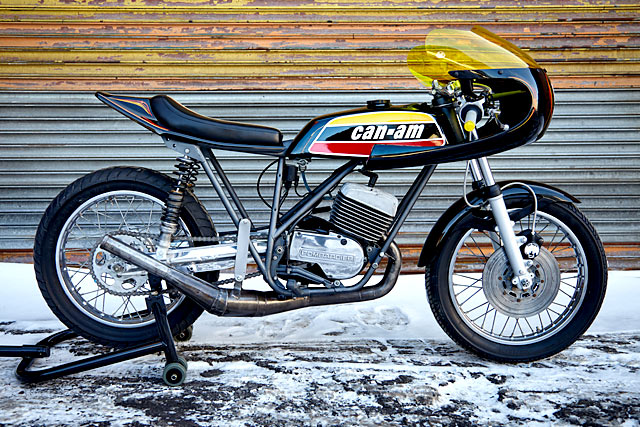 “Chi-Jer’s Vintage Bike Works isn’t a single shop,” says team member PJ Grakauskas. “It’s a collaboration between family and friends spread out over northeast Ohio and three generations. Chi-Jer is short for ‘Chicago Jerry’, my Pops. Our last name ‘Grakauskas’ has always led to nicknames. I grew up on two wheels and started wrenching on bikes again with him a number of years ago in order to spend more time together. I caught the custom virus and started building rad machines I wanted to ride. Luckily, I had an abundance of parts accumulated over many years in the family barn to use.” 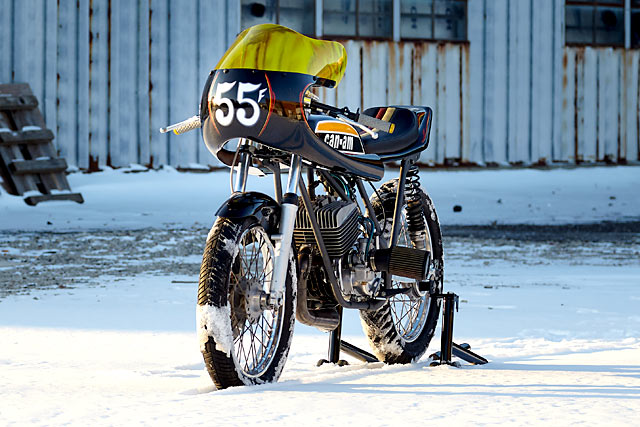 “I guess you could call it a café racer, kind of a hybrid with the flat track seat and no rearsets. It started life as a 1975 Can-Am TnT 250 Enduro. I always refer to it as my ‘Birthday Bike’ for reasons I’ll explain soon. We also call it ‘55 Fast’, because 55F is Pop’s AHRMA racing number.” 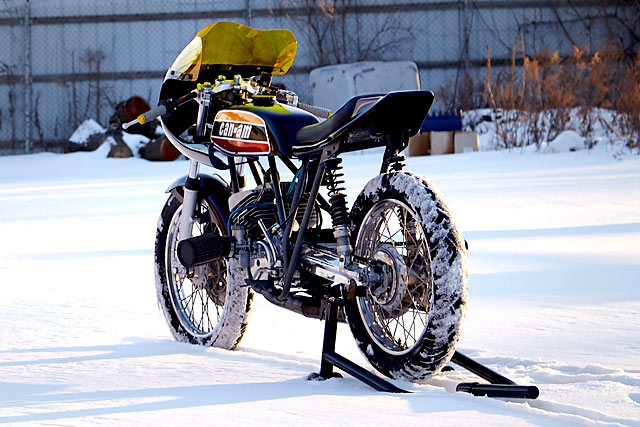 PJ recalls that the bike was nabbed after turning up in some vintage MX deal or a swap meet. “Pops picked it up and had intended to strip it for vintage MX racing, but somehow I learned it had a title so I wouldn’t let him use it for that. He later gifted it to me with the signed title on my birthday many years later – hence the name.” 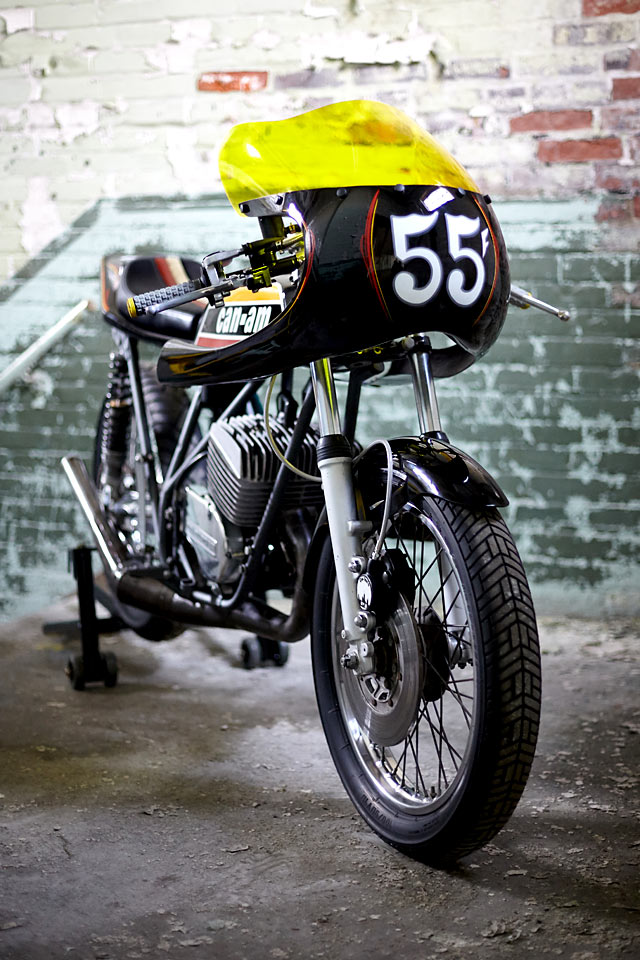 PJ had been hanging out with so many of the ‘older guys’ that have been racing for years, so he says he wanted to pay homage to their era. “The days when privateers and ’run what you brung’ was a way of life. I grew up in Ford Econoline vans with everything in the back removed to haul bikes. Channeling this, I tried to make this bike look like it was owned by the local neighbourhood’s fastest racer.”

“I grew up in Ford Econoline vans with everything in the back removed to haul bikes.” 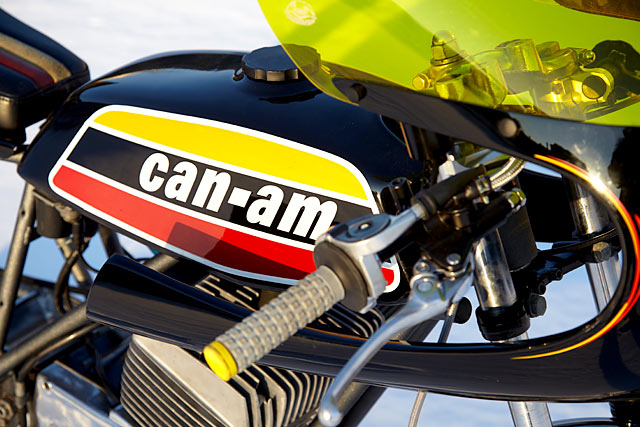 Rather than a big, intense project, PJ says that the build was spread out over many years – all while he was still riding the thing. “The bike, not being a priority, got put on the back burner. Then the holy grail became available; that side draft clutch cover! It is the clutch cover that KART racers used. I always wanted one but I could never find it, so I scooped it up when someone posted it online. Then I just started collecting parts. Some were acquired from vintage swap meets, but many of them just needed to be pulled from the barn and cleaned up.” 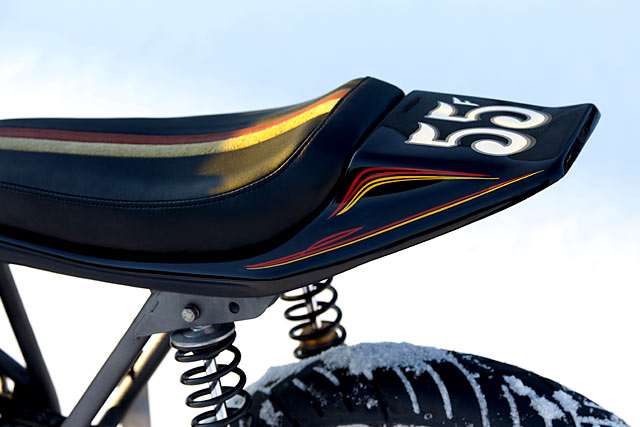 “These included the racer’s flat track pipe, the Öhlins rear shocks, and an aluminum swingarm from a later model Can-Am. I also took the complete front end from my personal stash of Yamaha RD350 parts.” And once the bones were there, it was go time. “The motor was completely gone through and the two-stroke automatic lubrication system was deleted, which requires some drilling through cases. I was able to vapor blast and fab many parts at the local community garage, Skidmark. I’m proud to say that my 8-year-old son helped out and learned a lot, too.” 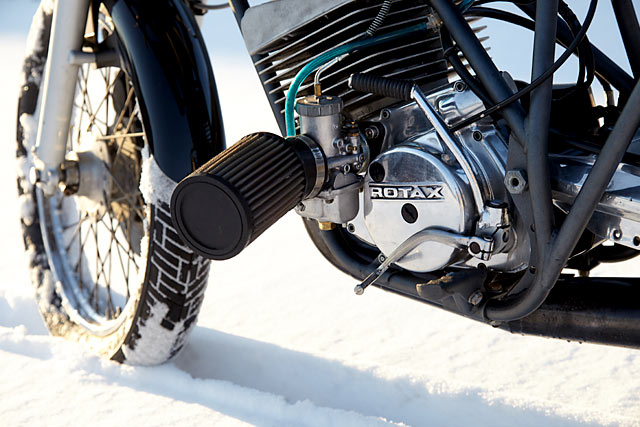 “The use of the side draft intake for the rotary valve drove me crazy. Luckily, the cases on the Can-Am are easy to split if need be. Some fine tuning, shimming and grinding took place. Just when you’d think it was good you would find misalignment somewhere else. The kicker shaft would bind on the cover and it was tedious to file, tighten, check, remove, and repeat until good. Still, we got there in the end.” 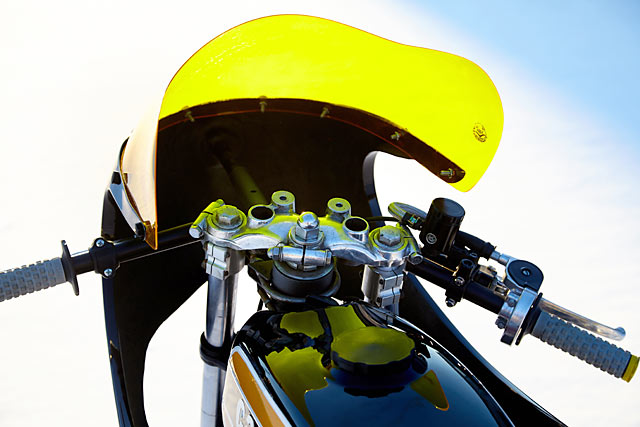 “The friendships that grew from this are staggering. It is priceless. Much of the work that was outsourced was done by close friends and like-minded people, bartering with each other for services and parts. 6th City Cycles in Cleveland took care of the powder coating, Krossover customs laid the paint, Atomic Bob killed the vintage pinstripping, Ginger from New Church Moto did the seat upholstery, and PSP shined up the aluminum bits. But so much of the racer’s fabrication and building was able to be done because of Skidmark Garage their equipment, space, and the family of friends there.”