When you’re a kid everything seems big, adults appear to be giants and a semi-trailer truck may as well be a Transformer. Even the childhood home feels like a castle until one day you return as an adult and realise it’s just a regular old three bedroom house. So too the bikes of our youth, which is why Daan Borsje, the main man at Moto Adonis, constantly increased the size and capacity of his little Yamaha RD50 to keep pace as he grew. That machine would be relevant once again when years later an old friend from the neighbourhood asked Daan to create a motorcycle to bring his childhood dream into adult sized reality. The result is a Cafe Tracker 1997 Yamaha Virago XV1100 with plenty of RD50 influence. Meet the ‘Elegant Bastard’. 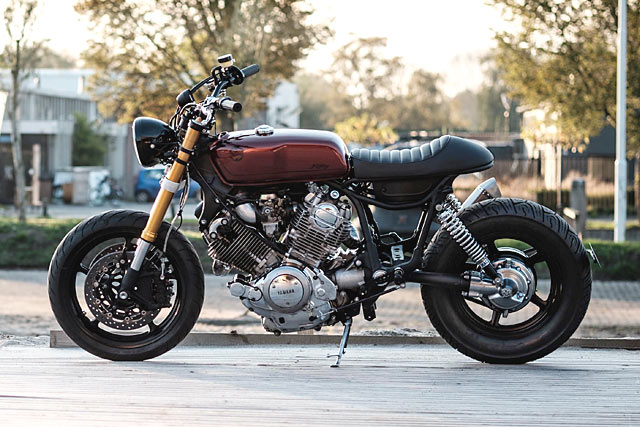 From his workshop in the Dutch city of Roosendaal, Daan has become a dab hand at creating tasty customs and his Yamahas in particular lead the charge.  Which worked out nicely as customer Luk has been riding the Japanese marques creations since he was twelve years old and decided having seen the work of Moto Adonis it was the place to take his XV. Although he wasn’t quite sure what he was signing up for as Daan explains with a laugh, “He thought I would keep his bike in original form, but he gave me his blessing after I’ve told him about my story.” The final piece to the puzzle to bring the story full circle for these lifelong Yamaha fans was that the inspiration would be drawn from Daan’s old RD50. 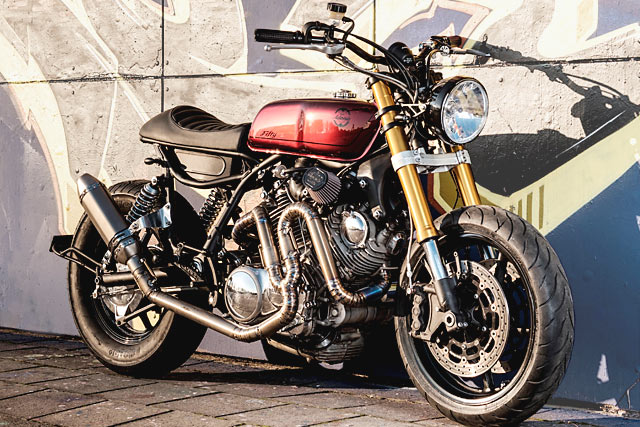 The big cruiser was soon up on the bench stripped of all its body work and the front end pulled off so Daan could begin to envision the lines of the bike he was to create. In his mind he saw a slimmed down machine, much like a cafe racer but with an upright riding position and exaggerated looks that give it the bastard name. The first step was to rework the rear section of the frame, the drop seat cruiser look making way for a rear hooped section. An insert was cut to flush fit a tail light before the new round bar subframe was welded onto the original. Any surplus tabs were cut off, holes filled before the whole thing was smoothed out and painted matte black. 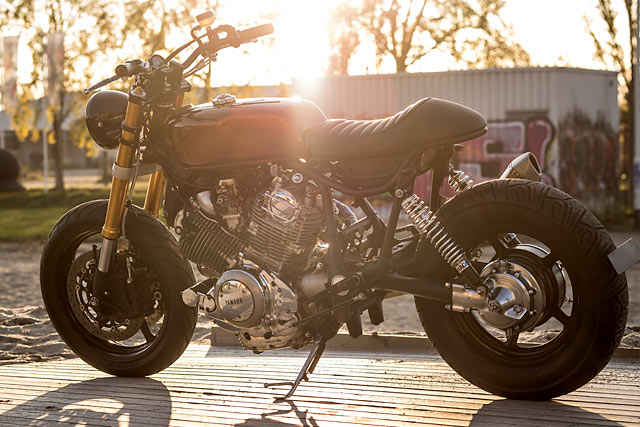 But if the rear end was heading for a classic look, the fuel tank would be anything but and when Daan says he was drawing inspiration from the little RD he wasn’t joking. Soon the big Yamaha XV tank was replaced by a far smaller unit that has been modified to fit over the back bone and mounted so the bottom seam runs flawlessly with the seat’s line. To really make the little tank pop its been sprayed in a deep candy apple red, with subtle black graphics and a new chrome filler cap. The cafe styled seat is all black leather with plenty of foam for a comfy ride on a tough looking bike. While keeping things legal, a neat number plate holder sits behind the rear wheel, attached to the swingarm. 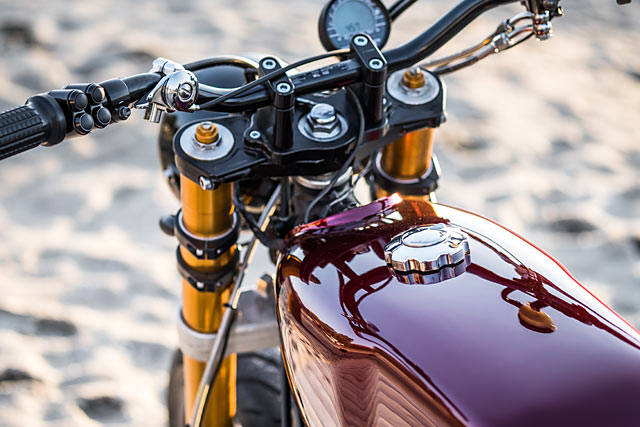 Being the veteran of Virago builds that he is Daan knows how to make them handle and the first step is ditching the pogo stick like front forks. Keeping it in the family the replacement front end comes from a 2007 Yamaha R1 that had received an all new internal fork design that year with extra rebound adjustment perfect for handling the big XV’s weight. They also come equipped with the over the top twin disc setup that’s clamped by dual six piston calipers, this thing stops! The twin shock rear is not made to feel left out with a set of custom Hagon units from the UK specialists with the rear hub polished up to match. 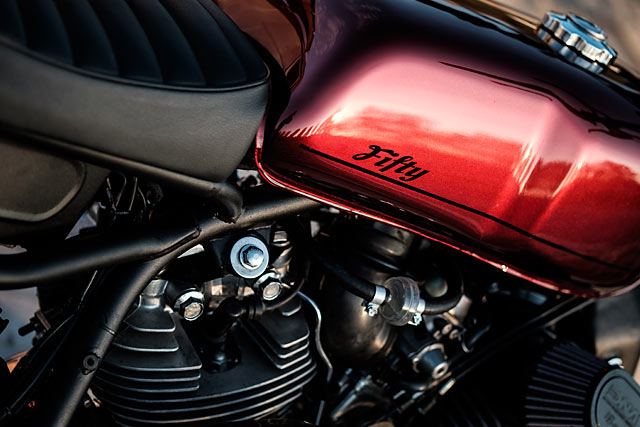 Of course what makes the Yamaha XV so popular is the simplicity of an air-cooled v-twin and the thunderous torque it delivers from down low. With 1063cc and 2 valve heads you can twist the throttle in any gear and she’ll just start pulling. But that can be a slightly dull experience without the right soundtrack and a little more top end and a K&N filter was the first addition to improve these flaws. The real talking point however is the full handmade titanium system, that consumed hours of Daan’s time but was more than worth the effort. Two into one headers with plenty of exposed welds on the lobster cuts lead back to a modern sportsbike style end can for a raucous scream.

“What makes the XV so popular is the simplicity of an air-cooled v-twin and the thunderous torque it delivers.” 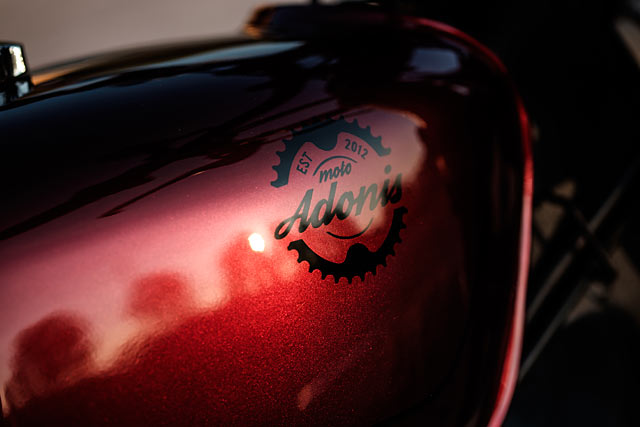 The big advantage of using such an exotic metal is the weight saving it provides and having stripped plenty of the original, 221kg Daan started going to extremes. The stock wiring harness was gutted and a new one built with only the best components and the bare essentials, “all the wiring had to make way for the simple Motogadget m.unit with m.switch, we fitted a nice small rear-light in the back and added some high-end Premium blinkers for the front and back.” That wiring is now hidden neatly in an under seat housing, an uber clean solution with the deletion of the side covers and addition of the small tank. 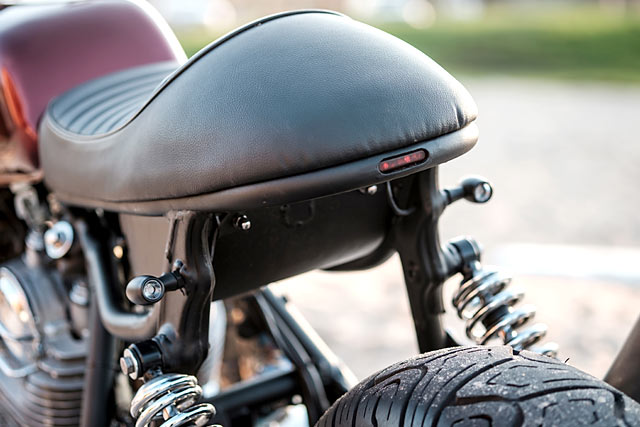 What did we do before LEDs? 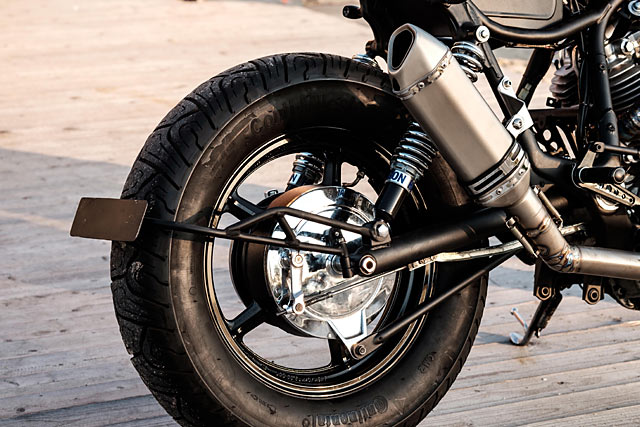 The R1 clip-ons were removed and a set of risers attached to the top triple clamp allowing for the fitment of low-rise bars that help add some tracker style to this cafe weapon. Machined headlight clamps affix an all new housing and the front end is finished off with a single all in one speedo and upgraded master cylinder. The oversized forward controls that come from the factory had to go and with custom-made linkages all new rearsets bolt up a treat. Now all that’s left to do is for Luk to climb aboard his Yamaha urban warrior and attack the streets with all the enthusiasm of a ten-year old and Moto Adonis have once again created the perfect big boys toy; a very Elegant Bastard! 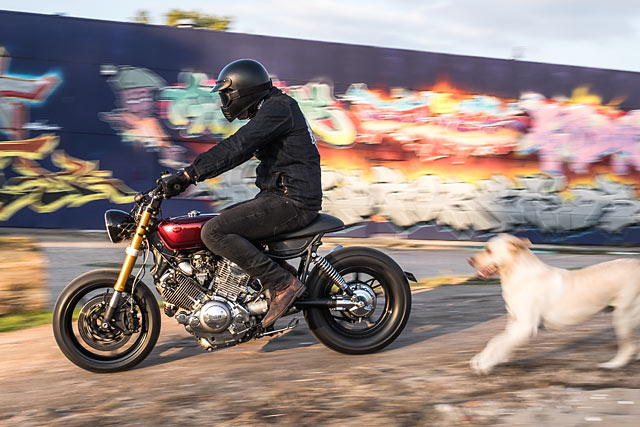