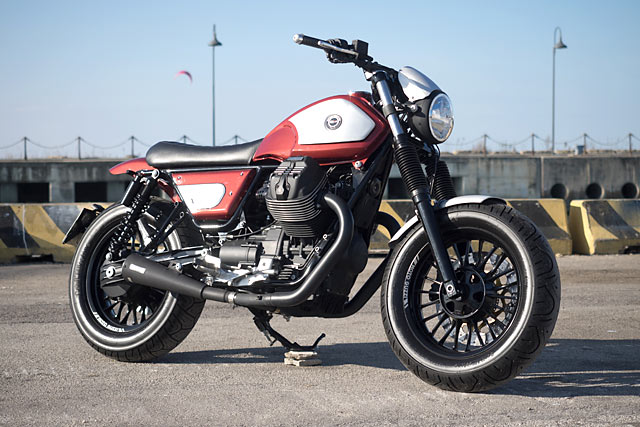 For all the new kids on the block that come charging into the custom bike scene with guns blazing there are still the old hands who have seen the trends come and go. One such man is Italy’s Filippo Barbacane who since 1993 has been applying his skills to motorcycles and in the process built perhaps the world’s greatest catalogue of customised Moto Guzzi masterpieces. The head honcho of Officine Rossopuro was looking for a way to commemorate ten years since he built ‘80’, one of his most popular bikes, and decided to pay it tribute by setting a challenge. Take a brand new Moto Guzzi V9 Bobber and create a crazy cool street machine called ‘VIX‘ (or ‘V9’ in Roman numerals) that maintains the bikes strict Euro 4 compliance. 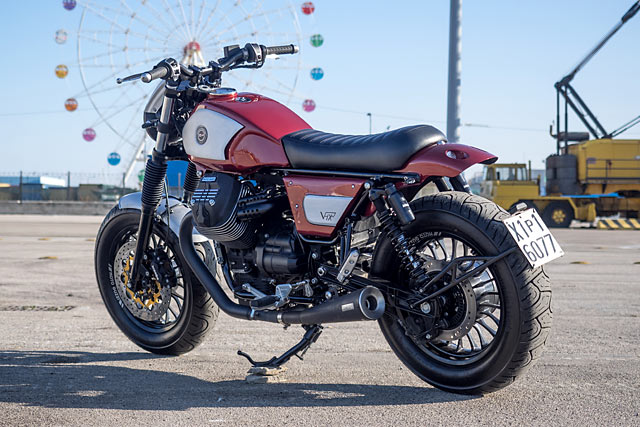 That wasn’t the only test for Filippo who prefers a starting platform from more simple times, “I do not use a lot of new bikes because they have too many electronics and I don’t really like modern electronics, but I wanted to try to make a special based on the new Guzzi, because Moto Guzzi also chose a style that was a bit custom for these latest motorcycles, but I think also the potential to make a very different bike is there.” In the search to create his own take on the new V9 one thing he refused to sacrifice was the absolute road legality of the bike and its compliance to Euro 4 standards. 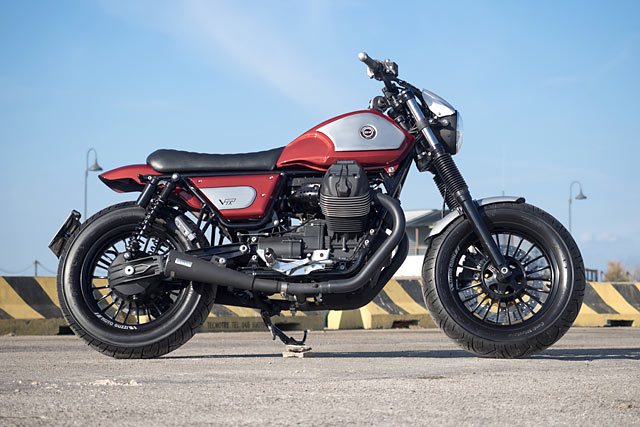 Whereas most of his builds involve taking a grinder to the stock frame, fitting up a raucous exhaust and showing scant regard for the feelings of the authorities this would be a somewhat more sensible build. The philosophy is sound as most consumers who shell out for brand new bikes don’t fancy too much the idea of them being cut up nor voiding the warranty, let alone suffer the endless harassment of the police. But from the beautiful town of Pescara where he operates, Filippo knew despite the limitations he could still make one hell of a bike, most of all one that was truly fun to ride. “I just wanted to undress the motorcycle of everything and make it more sporty and light.” 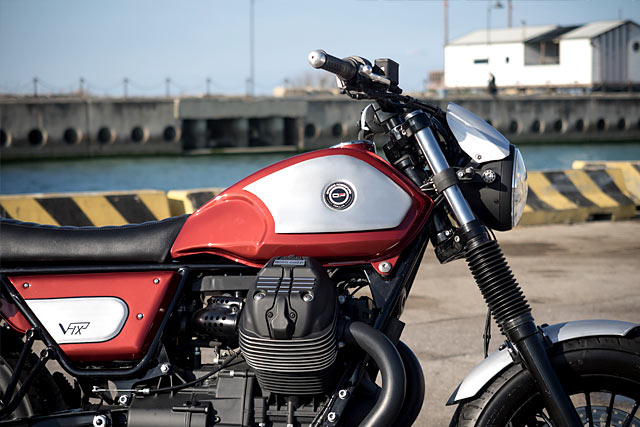 Like all bikes that roll out of Officine Rossopuro the body work is incredible, the master metal worker always finding a way to beautifully compliment the lines of a Guzzi. But to set himself yet another challenge Filippo wanted to make the tank and panels out of both steel and aluminium in what he calls a ‘hybrid body’. The gorgeous tank combines the two with the lines contoured to pick up some of the styling cues of the stock V9 while still being 100% original. The speedo is flawlessly integrated, slightly raised to make viewing a breeze for the rider. 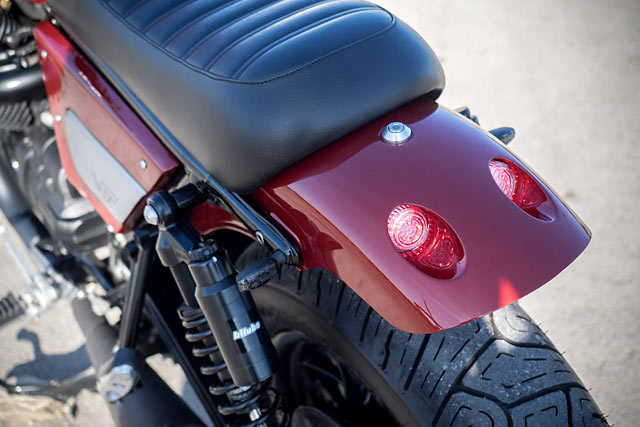 The pop-up filler cap is flush mounted to leave a smooth surface to run your hands over, while Filippo’s now famous knee dents are back with a special design just for the V9. The aluminium panelling not only has the shop logo applied but with completely hidden bolts they appear to hover magically over the tank. The Guzzi’s side panels are a mix of raw and painted alloy with the design a cleaner version of the stock part, while the aluminium front fender and neat cowl are also left in their natural state. 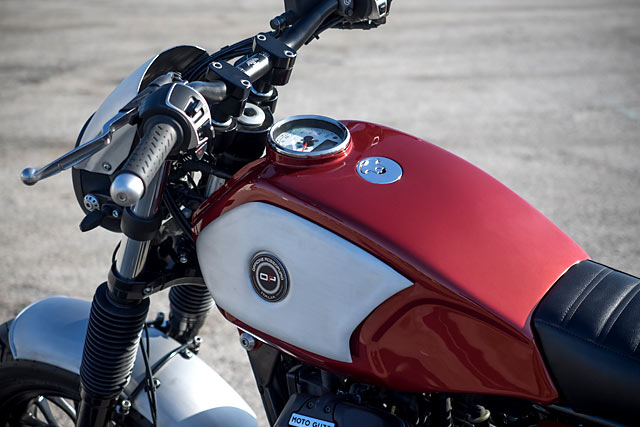 The rear tail and fender piece is simply a work of art, reverting back to steel for its construction it is a perfect combination of form and function. The design is substantial enough to act as a proper rear guard, while the seat latch locking mechanism is placed directly inline with the filler for that detailed touch. But the pièce de résistance is the way the frenched in tail lights are all but invisible from side on and only reveal themselves as you move to the rear of the bike. To compliment the raw metal and black, the red for VIX comes from close to Filippo’s heart, “the colour used is similar to that of my old bike made 10 years ago, 80. I really love this memory!”

“The rear tail and fender piece is simply a work of art. It is a perfect combination of form and function.” 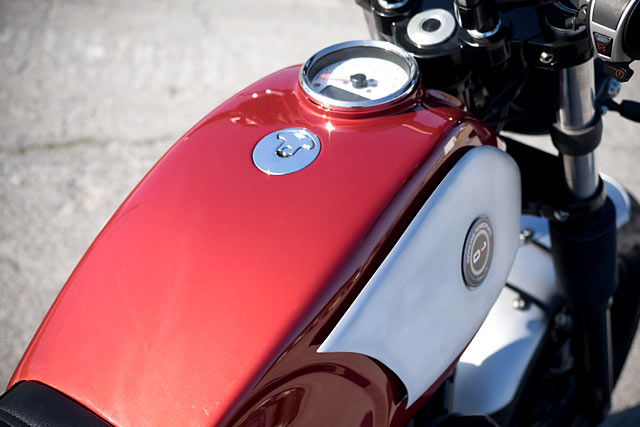 The all new Guzzi comes with an unusual tyre combination for a modern road bike with beefy rubber at both ends. Filippo has deliberately designed the body work to visually minimise the look of the front tyre while showing off the big rear end. But to get the stance just so he threw away the factory shocks and replaced them with a set of longer premium Bitubo items, with almost unlimited adjustment. Up front the fork gaiters give the long factory stanchions a shorter look and VIX takes on a much more balanced stance. That is only further improved by the flatter than factory bars now in black with machined alloy ends. 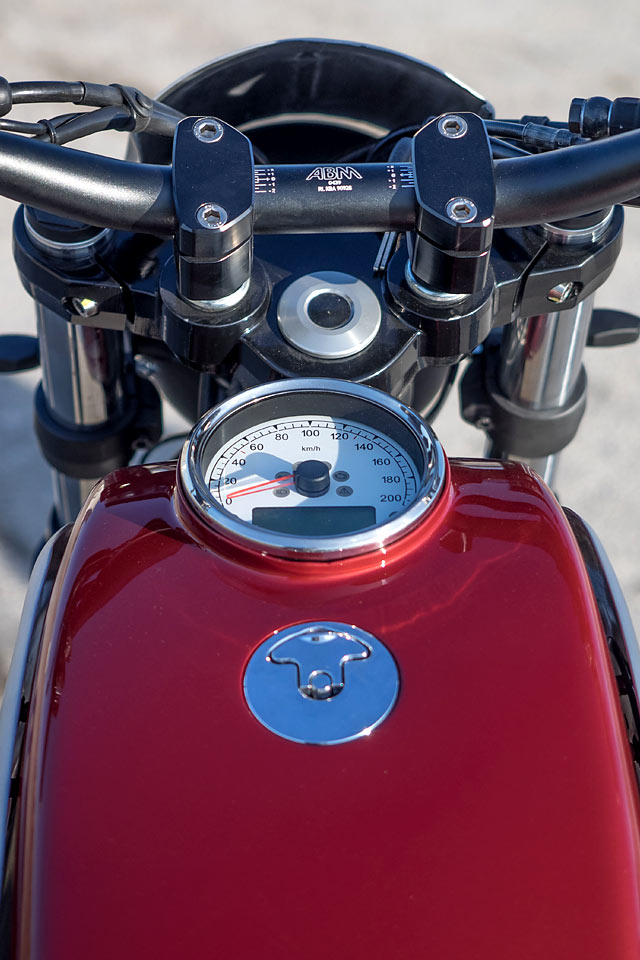 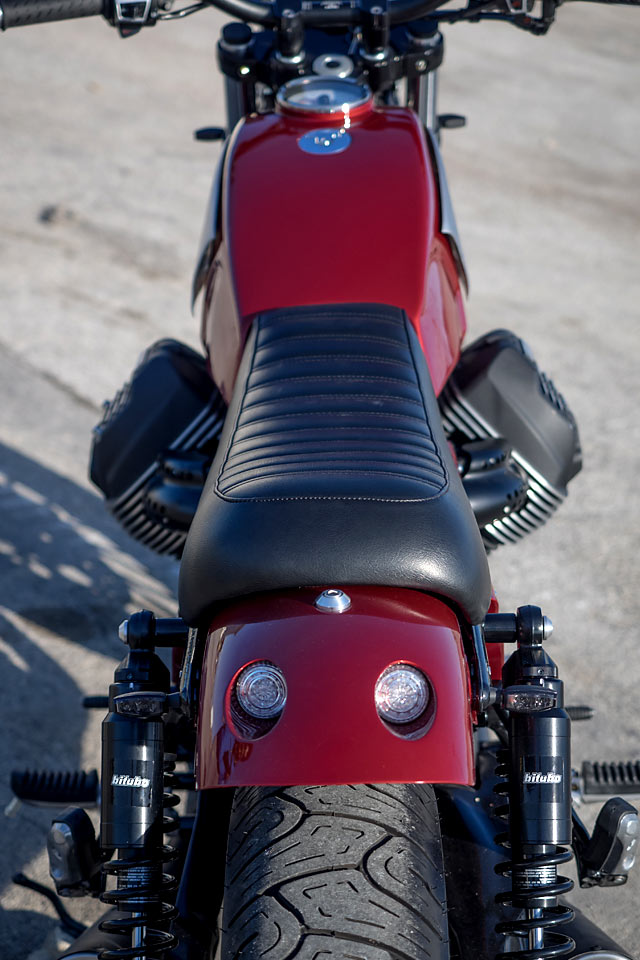 Of course even on a more sedate build, no bike leaves Officine Rossopuro without getting a few more ponies and an all new soundtrack. So based on Filippo’s own design and fabricated by Mass Moto, the new exhaust not only achieves both but has been homologated to fully comply with Euro 4 regulations. So too the small smoked out indicators at all four corners, so try as they might even the most overzealous law enforcement officer won’t be able to book you for the modifications on this Abruzzo beast. Fancy the reliability of an all new bike, with flawless customisation and full road legality? Then call Officine Rossopuro because this Guzzi is now looking for a new owner, all you have to do is get in touch, slap down your money and get your kicks. 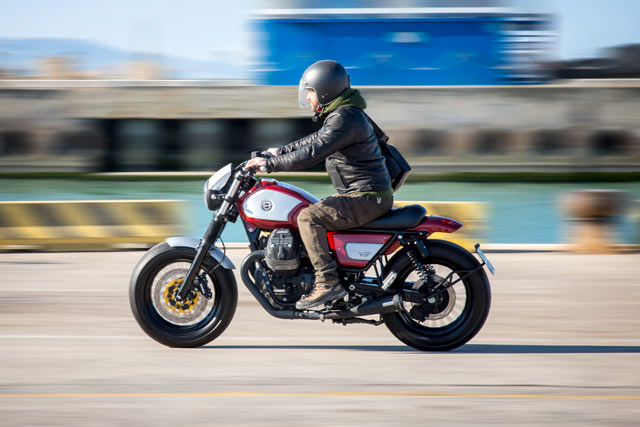