If you’re anything like us, one mention of running moonshine in the 70s and your head will be full of orange Dodge Chargers, getting sideways on dirt roads and comically inept police. But California’s Boxer Metal took a decidedly ‘out of the box’ approach to the nefarious task at hand. Why not run the booze on a bike? Sure, your jug carrying capacity might be restricted but a decent scrambler would be able to avoid the roads, and therefore the law, like a Charger could only dream of. And so their BMW R80/7 ‘Moonshine Runner’ scrambler was born. 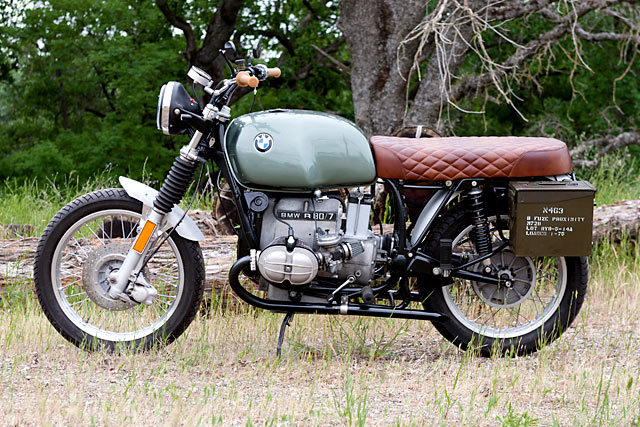 Boxer Metal is run by Rebecca and Chris; two modern-day Robin Hoods who also manage to customise bikes and manufacture some seriously good parts for BMW models, to boot. And while their 55 years of combined industry experience may lead you to believe that they are approaching ‘porch and rocking chair’ age, a quick look at their social media feeds may surprise you. “As well as working together, we live together, raise a family together and travel together,” says Bec. “We both love what we do and we love working with our customers, too. With two creative minds going seven days a week, the ideas are always exciting.” Starting with a broken and busted 1978 BMW R80/7, Boxer Metal were asked to make a scrambler that could handle all of Southern California’s urban hazards as well as it does a run on the beach or an off-road stint in the California Mountains. Put simply, it had to be thoroughly Californiacated. 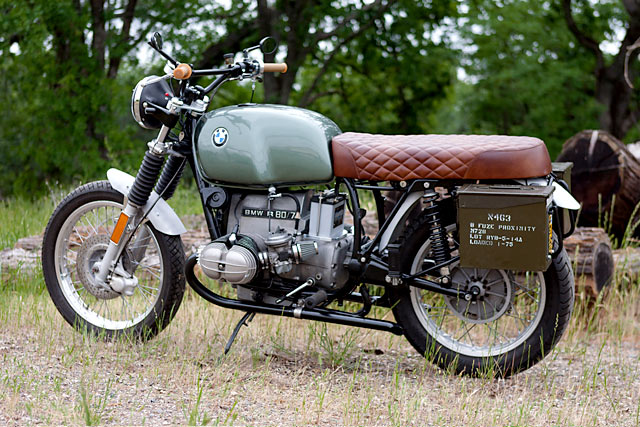 When running moonshine, you can never have enough ammo…

“Our customer wanted to get from home to work, and from work to the beach with a minimal amount of effort. Since lane splitting is now legal in California, we chose to make the bike as light as possible and provide all of the lighting with LEDs. Unfortunately, during this initial phase of the build, our customer was involved in an accident and the motorcycle was brought to us wrecked and in pieces.” Ouch. 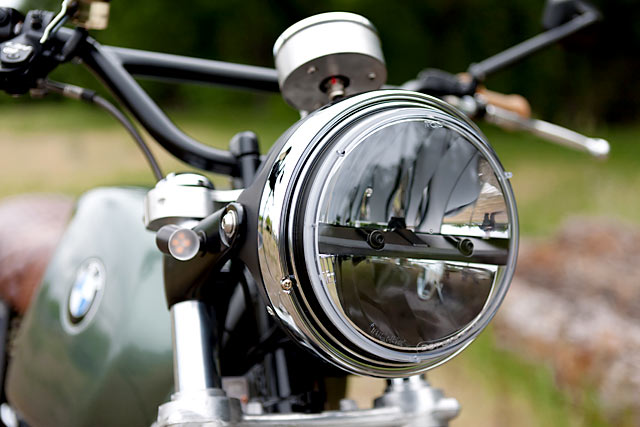 To help make lane splitting and navigating through traffic easier, shedding some weight was the first port of call. Then the bike’s ‘all-road’ abilities had to be considered. “This way the customer could also enjoy a weekend getaway in the neighbouring mountains; up to places like the ‘Rock Store’, where you might find the likes of Jay Leno and other celebrities sipping on their coffees on a Sunday morning.” 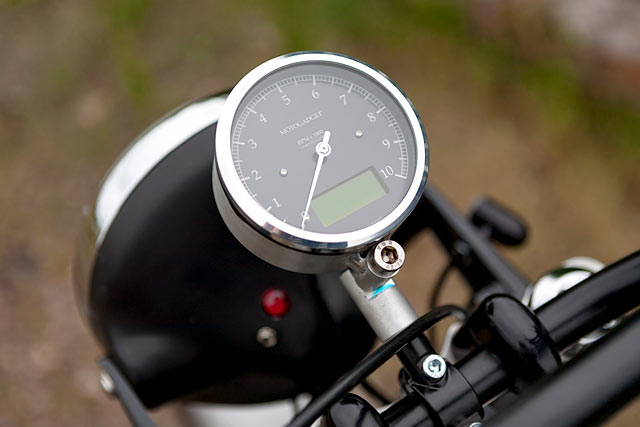 At first sight, Chris and Rebecca were quite surprised at the condition of the bike. The customer said that the crashed frame had been checked at his local shop and had been given the thumbs up, but the two were sceptical. Getting a second opinion, it turned out that the frame was in fact bent from that accident. After straightening, the lower triple clamp, fork tubes and front wheel were replaced with good used parts, and a Boxer Metal upper triple clamp was installed.

“The customer said that the crashed frame had been checked and had been given the thumbs up, but the two were sceptical.”

Next, the forks were rebuilt and aligned by Chris for a smooth ride. Since the bike was completely disassembled, a few key parts were dispatched for powder coating. The engine had previously had a significant amount of work done on it so Chris and Rebecca were left with detailing duties, replacing the valve covers and fixing the bad exhaust threads with a German bolt-on kit. “As always, the custom exhaust was built at Boxer Metal,” says Chris. “The transmission was in great shape, so all it needed was to be cleaned and detailed. And the scrambler’s rear drive was rebuilt by Boxer Metal with brand new splines.” 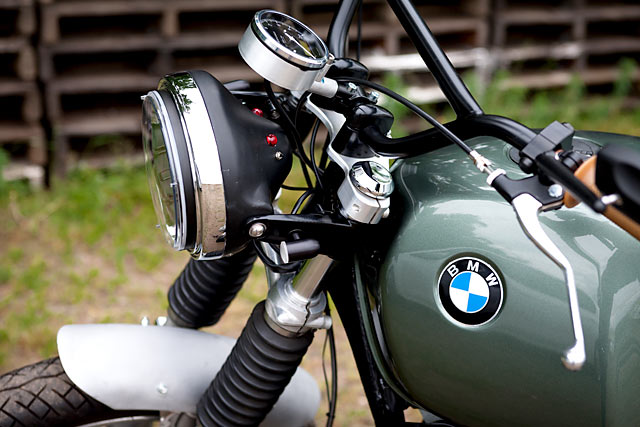 Then a suite of a Motogadget goodies were sourced, including an M-unit, some M-switch handlebar controls and a Chronoclassic Speedo with a Boxer Metal-made mounting bracket. All of the bike’s lighting was upgraded. A 7″ LED headlight and some Hightech Speed front indicators were bolted on, allowing the addition of a Boxer Metal battery box kit to save on weight.

Cosmetically, the gas tank was boiled, resealed and repainted the original Battleship Green shade it arrived with. Boxer Metal aluminum fenders front and rear were added and the seat was reupholstered with some warm brown leather by Ginger at New Church Moto. “The last detail of the build process was to install the customer-supplied ammo cans. Chris decided to use stock BMW saddle bag mounts, as this would allow the customer some versatility in the future.” 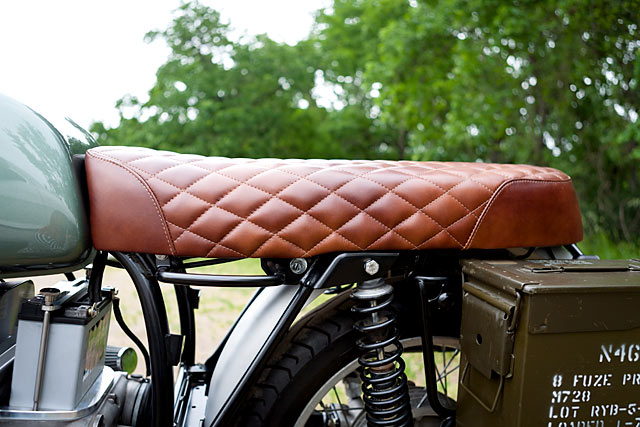 “The hardest part of the build was the first impression we got when the bike arrived at the shop,” grimaces Chris. “It was in pieces and covered in oil, grease, and grime. It made us think that the bike was not worth the time or money to put back together. But the customer’s love for the bike dictated that no matter what, he wanted his ‘first motorcycle love’ to be resurrected.” And clearly, that’s exactly what the two did. 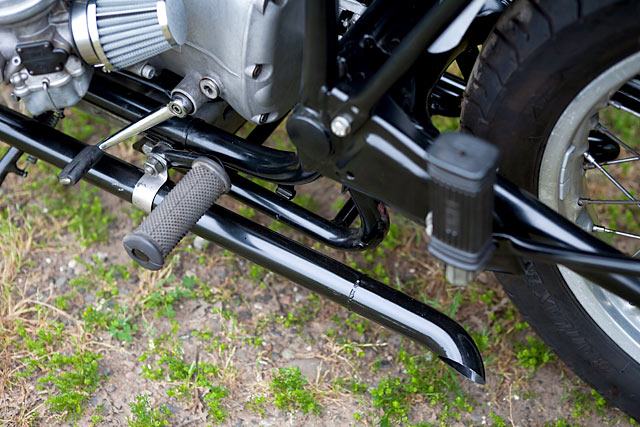 Pipes are clean and classic

The duo says that the best thing about the whole process was the look on the customer’s face when he showed up to ride the scrambler home. “He was so happy! It was even better getting a text message when he arrived home with a grin on his face and a big thumbs up that everything went well,” says Bec. Future plans for a second phase of the build will likely see a surfboard rack and a Boxer Metal big brake kit added to the equation – something that Chris and Bec are no doubt looking forward to helping him out with. 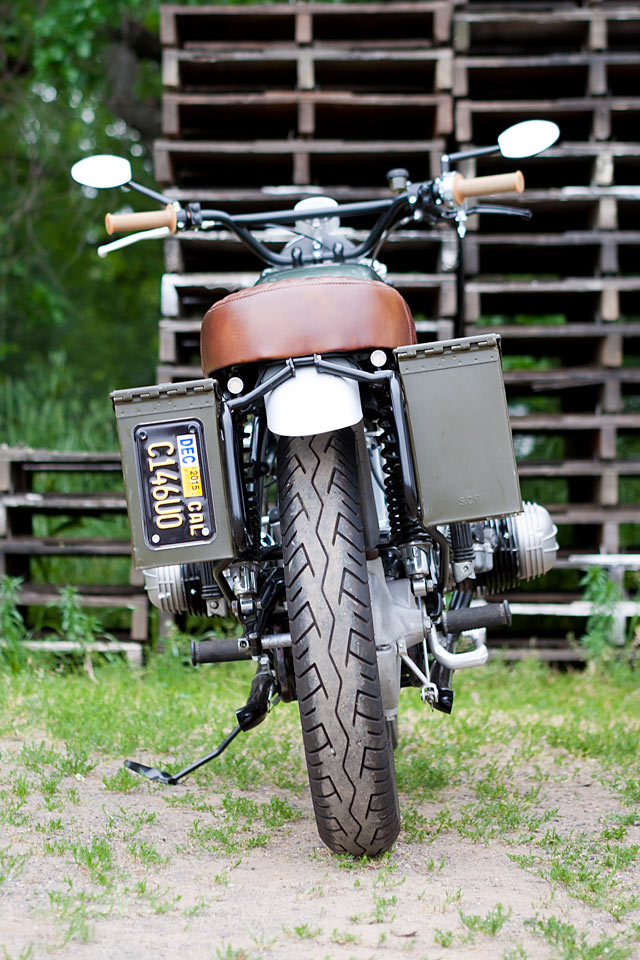