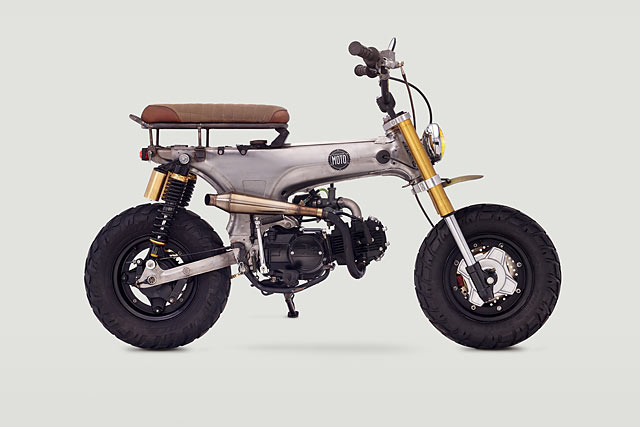 Chasing dreams. It’s the subject of many a self-help manual, Hollywood movie and dolphin-covered motivational poster. It’s also the leading answer you’ll get when you ask most motorcycle riders and customisers why they do what they do. ‘It’s always been a dream of mine,’ they’ll say with a smile. Or, ‘I dreamt about doing it as a child.” Having both his moto licence and his own custom shop, Classified Moto’s John Ryland is 2-for-2 in the dreams-made-real stakes. But he still had one castle in the air he wanted to bring down to earth. The ability to do wheelies. It’s not only the subject of the shop’s latest video, it’s also the raison d’être for heir latest custom. Meet ‘Junior’, their Honda CT70 scrambler – the bike that wheelies built. 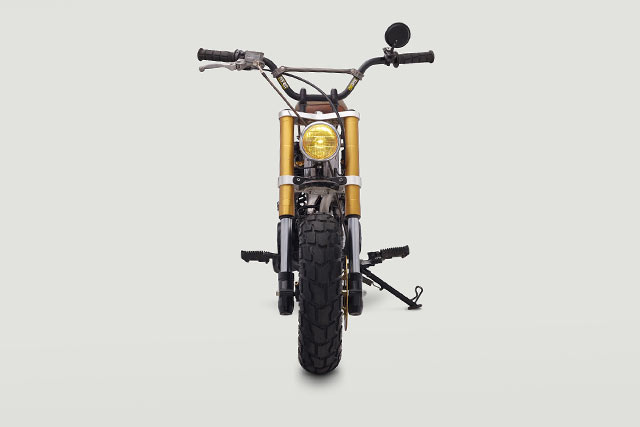 As the last classified bike we posted was in 2016, we figured there was probably some catching up we needed to do. So, what’s Mr Ryland been up to, then? “Classified is going on its eighth or ninth year in business, and we’re always looking for ways to keep things interesting both from a design point of view and overall job satisfaction standpoint. We’ve definitely had to dig deep in the design department because there are so many bikes out there now that could be confused with Classified bikes. Kinda fun to see, but we know we can’t just keep doing the same thing and stay relevant.” 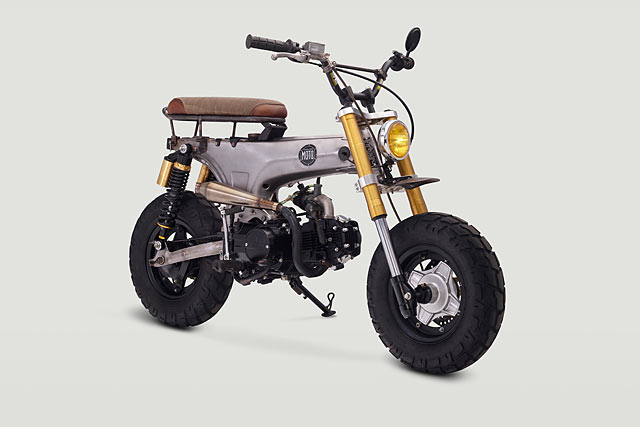 One thing they’re clearly getting a lot of energy from is their new YouTube series, RESTRICTED. “We’re doing the entire thing in-house, from writing and shooting to scoring. It’s been a blast.” And we’re here to say that watching them ain’t too bad, either. In fact, we’d like to go as far as saying that they’ve kinda moved the whole genre forward a step or three. Gone are the usual clichés of slow-motion sparks and man buns; instead we get honest-to-goodness storylines and creative originality. Hell, when was the last time you saw a custom bike video that opened with a dream sequence set in 1980? 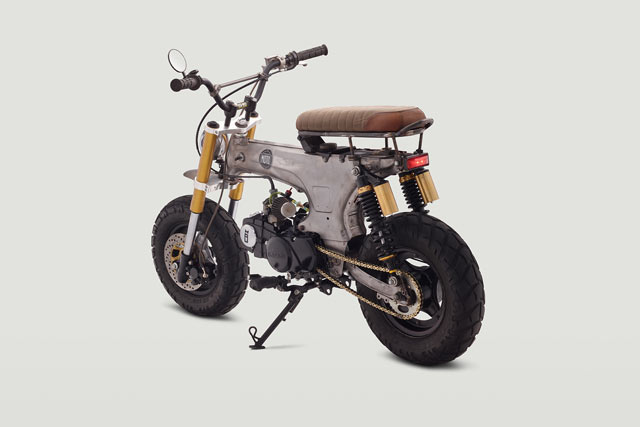 The latest episode (see below) is about this silly cool 1991 Honda Scrambler CT70, and them learning how to do wheelies with it. “We call the bike ‘Junior’, which is short for “Frank Jr.” Frank is the Speed Triple we built last year for Rebel Yell Bourbon. This bike was meant to be a loosely interpreted miniature version of Frank.” John tells us that he was buying a GSX-R front end for one of his builds many years ago and the guy selling it had the little CT in his shed as well. “He made me an offer I couldn’t refuse, and I took it back to the shop.“ 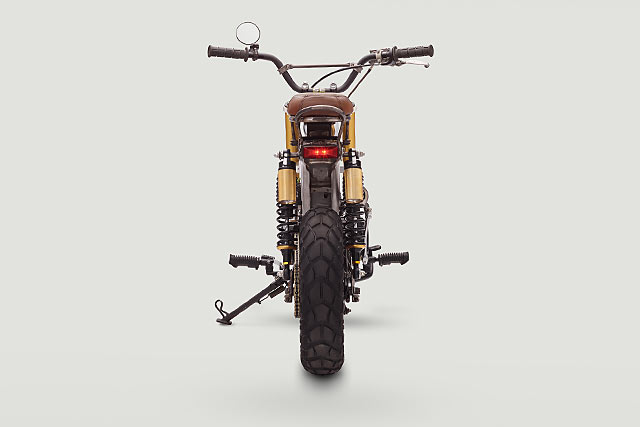 “Ever since I was a kid I wanted a minibike,” daydreams John. “It was not on the cards. As a kid, I wasn’t allowed to do anything that could be considered dangerous. Ironic that I ended up owning a motorcycle shop in my middle age, then. But we built Junior to have that ‘Classified look’ after learning to pop wheelies on it. It kept showing up in pics and videos we made, so we wanted him to put his best foot forward.”

“As a kid, I wasn’t allowed to do anything that could be considered dangerous. Ironic that I ended up owning a motorcycle shop” 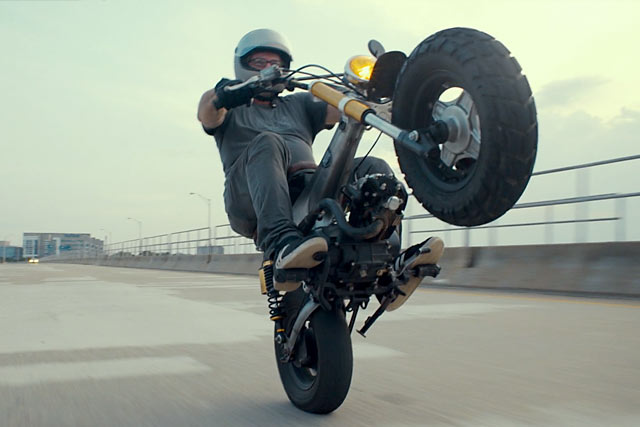 As far as Classified’s builds go, there’s nothing too complicated about this one. But that doesn’t mean it’s average, either. Hell, could a wheelie-poppin’ Honda CT70 scrambler ever be ‘average’? “It’s a bolt-on front end and brake setup. Some off-the-shelf canister shocks at the rear. The frame is stripped, like we do with a lot of our tanks. But this bike is more a statement about taking time out to be silly and have fun. Because as fun as you might thing the motorcycle business is, it can be very stressful a lot of the time. Junior is like a reminder to not take everything so seriously.” 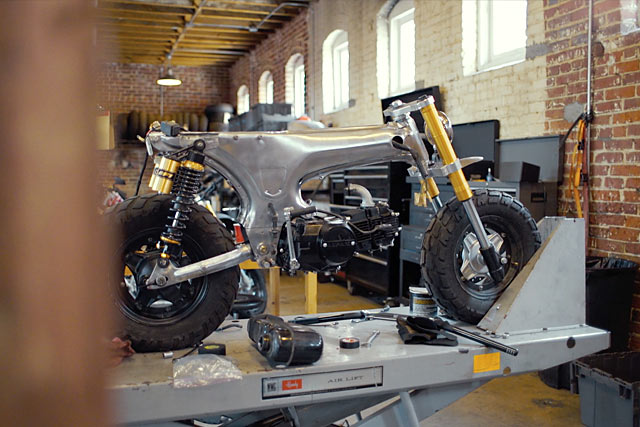 “The only hard part about the build was when we decided at the last-minute to finish it so we could take it to Sturgis with the Rebel Yell Bourbon crew. The Honda had been functioning, but not strictly ‘Classified’ for a while. Then suddenly we thought, ‘we need to get this thing to Sturgis and ride wheelies through the campground!’ It was a good motivator, but was cutting it very close.” 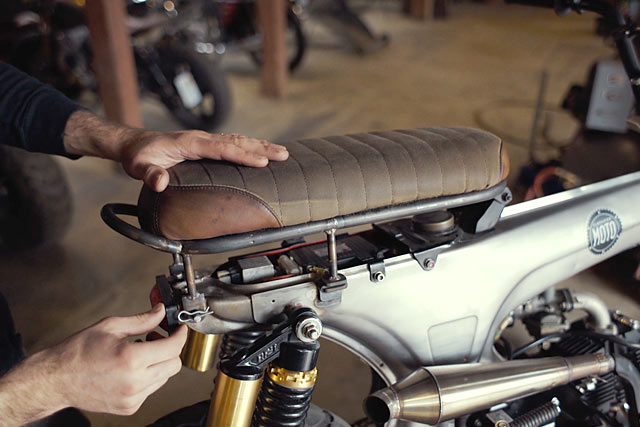 Some workplaces have quiet areas or rostered days off to curtail workplace stress. But Classified have taken a decidedly outside-the-box approach to the issue. “We think of Junior as the shop therapist. When you’re feeling down or stressed or anxious, kick Junior over and hit the road for some scrambler wheelie relief. He will fix you right up.” Sounds like our kind of job; who says America doesn’t have a decent healthcare system? 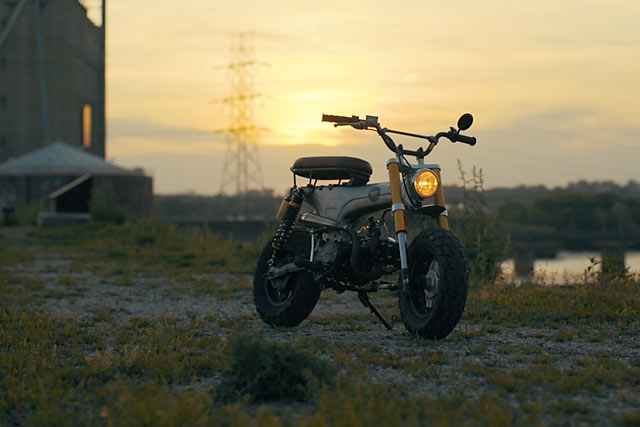 Junior takes a brief ‘both wheels down’ break

“The Honda’s coolest feature is probably the seat,” John smiles. “We wanted to have the height of a normal CT seat, but without the ‘huge block of vinyl’ look. So, we made standoffs for the hinged seat pan. This allows us to flip the seat up for fuelling as well as access the battery and fuses. But make no mistake; the bike’s true purpose is to do wheelies. I’m quite sure that we have logged more miles on one wheel than two at this point.” Giddy up!