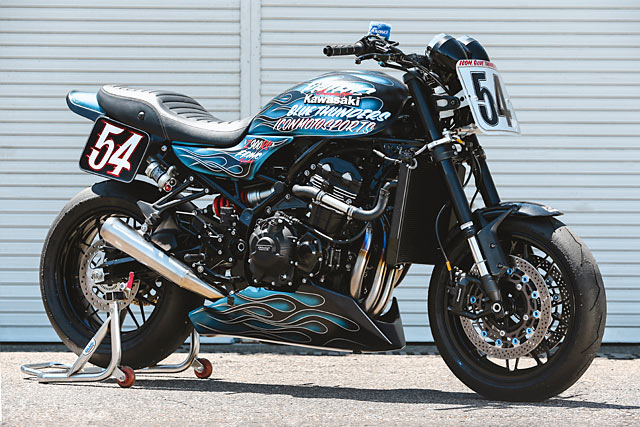 Whether it’s Eddie Lawson’s AMA wins in the early 80s or Mad Max’s Toecutter and Goose, nothing says ‘unbridled manliness with a touch of lunacy’ like a good old Kawasaki Z. And while you may be thinking that these times have passed, it seems that the launch of Kawasaki’s new Z900RS has seen the return of some good ol‘ retro moto madness. Custom-made for 2018, Japan’s Blue Thunders shop in conjunction with Icon Motosports has taken a brand new Z, made it into a racer and decided to run it up Pikes Peak at 110% just for shits and giggles. 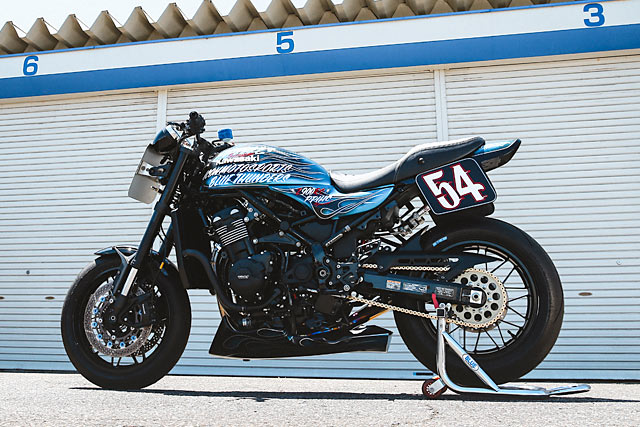 Blue Thunders are a shop located in Tokyo. Specialising in air-cooled Kawasakis, they exude that typical Japanese obsessiveness that, mixed with a massive population, means that bike fanatics of even the most obtuse tastes can eke out a decent living given half a chance. While their bread and butter is engine tuning and custom work on KZs, they also look after carbs, electricals, replacement parts and – quite clearly – Kawasaki race preparation. 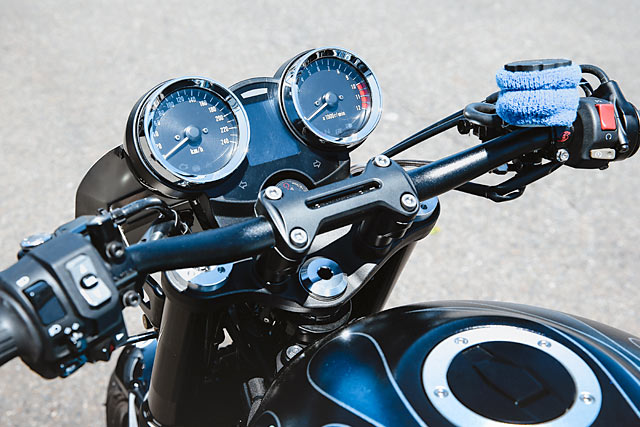 Our typical ‘lost in translation’ attempts to communicate with the Japanese-speaking shop saw them describe the bike’s style as ‘Neo-Classical.’ Call us crazy, but we think they are probably referring to those classic Lawson-era AMA road racers and not to pre-Christ Roman architecture. But hell, if they want to try a custom based on some Greco-Roman ideals, we’d be all eyes. Of course, the donor was a brand new Z900RS purchased fresh from a Japanese Kawasaki showroom. 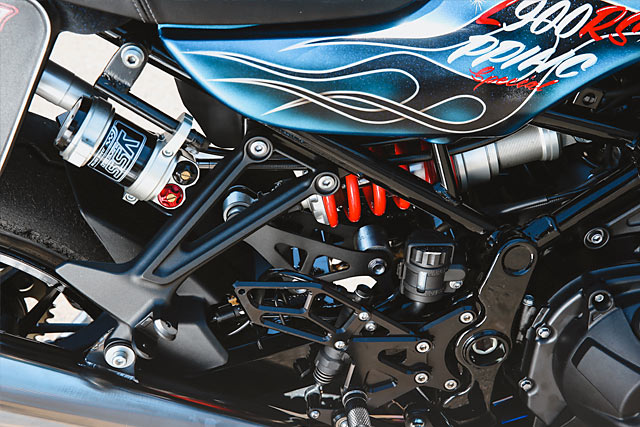 Jun Sumiyoshi, our Blue Thunders contact, speaks highly of the impact that the new bike has made in its homeland. “Currently, it is one of the most popular bikes in the Japanese market. It seems everyone is talking about it.” Now that really excites us in two ways. Firstly, it says that the retro muscle bike scene in Japan has a decent head of steam which bodes well for more bikes like this from Nippon manufacturers. It also is a clarion call for an impending wave of custom Z900s that could well be cooler than a Hokkaido handshake. 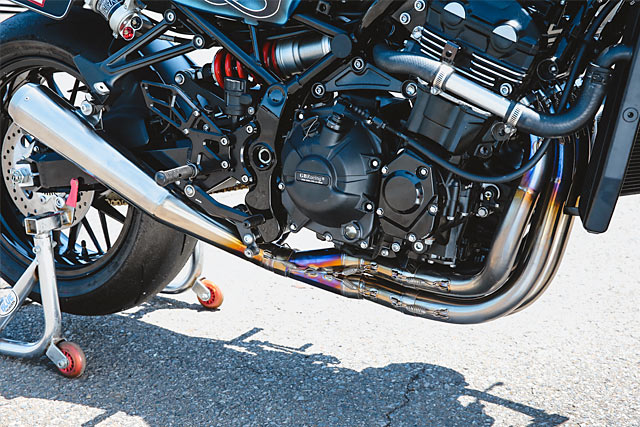 Shop owner Yoshiyuki Iwano’s brief to his team was a simple one. ‘I wanted to turn a Z900RS into a modern KZ racer,’ he says. And with Kawasaki having done such a good job or reviving the marque, it’s one of those ideas that is so simple, you’ll wonder why you didn’t think of it. You also might have been expecting the thing to be finished off in Kawasaki’s traditional nuclear meltdown green, but Yoshi made the call to promo his shop’s own brand by pulling the trigger on a stormy scheme in a metallic blue and black.

“Turning a Z900RS into a modern KZ racer. It’s so simple, you’ll wonder why you didn’t think of it.” 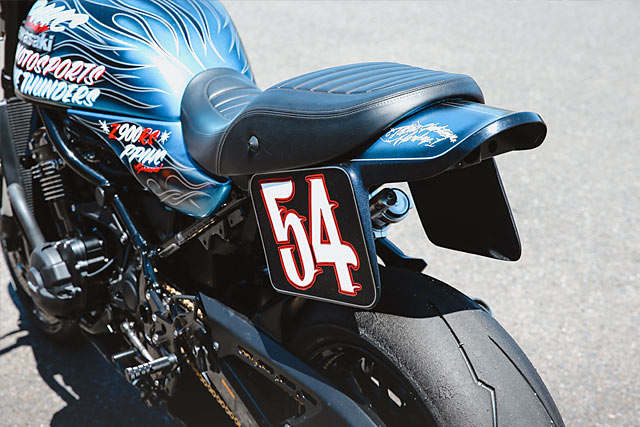 And while the mods to get the thing ready for the world’s toughest road race have been extensive, Yoshi was happy to take us through the big ones. The factory front fork was heavily modified to cope with racing duties and they also added an Öhlins steering damper. The rear shock is G-Racing mono by YSS with a remote reservoir and more levels of adjustment than your average particle accelerator. The exhaust is a combination of Akrapovic parts and an original Blue Thunders silencer; the rear fairing is also a bespoke BT unit. The bike’s brain was upgraded to a Rapid Bike box which was tuned to work with the new ZX10R radiator, new pistons, a reworked cylinder head and a special BT tuning. Dyno runs saw 140ps spins from the rear wheel. 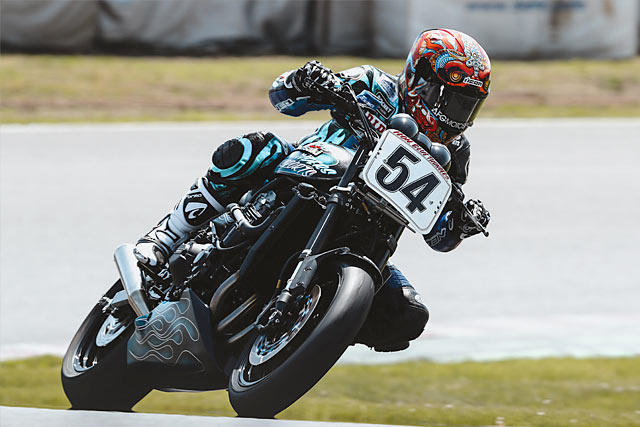 But the team’s biggest challenge was that fact that he bike was so damn new, they had to make most of the parts they needed by themselves. Now that might seem like a pain to you or I but as a commercial business, it means that they’re now way ahead of the competition when it comes to selling new parts to those customisers and racers who follow in their footsteps. 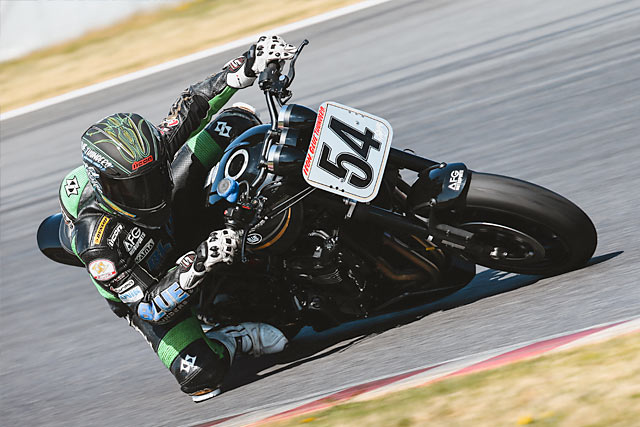 Knees down, up the mountain

So, what’s Yoshi’s favourite part of the world’s newest Kawasaki Z racer? “The pinstripe body work and paint is what I like the most. We had our friend Horikaze, who is a tattoo artist, design the pinstriping. Then to bring it to life, we called on locals Rods Design for the final paint job.” Maybe it’s just us, but the thought of a racing Z crossing the line covered in blue flames and pinstriping warms the carbon-caked cockles of our custom moto hearts. Break a leg, boys. 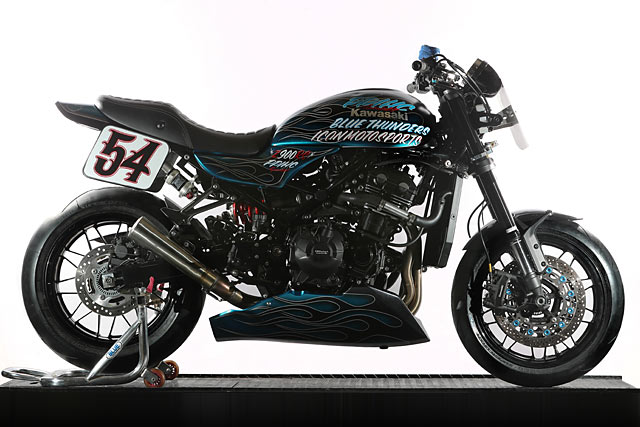