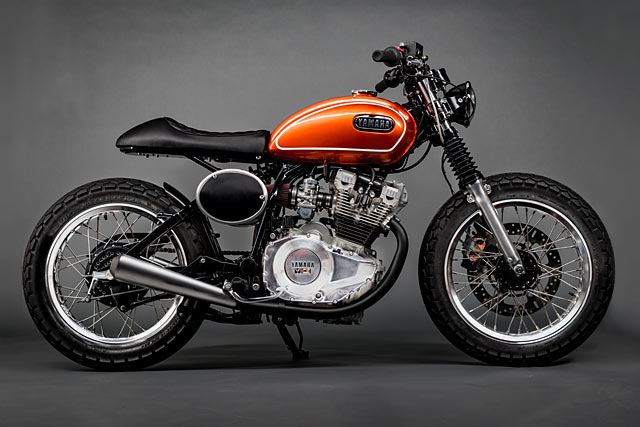 With the birth of the Cafe Racer revival he’s the man who put the unlikely Yamaha Virago on the map. With an endless run of craftsman like customs to his name, Greg Hageman has had an impact on the scene like few others. Now with his latest build he’s set to ensure another improbable Yamaha makes its mark, but you best get shopping as donor bikes are few and far between. A good friend had been urging Hageman to build a Yamaha XS400 Seca for years and with his girlfriend Sally needing a bike Greg finally agreed. Now bought and built by the best, all that’s left to do with this tracker is ride around Sally, ride, Sally, ride! 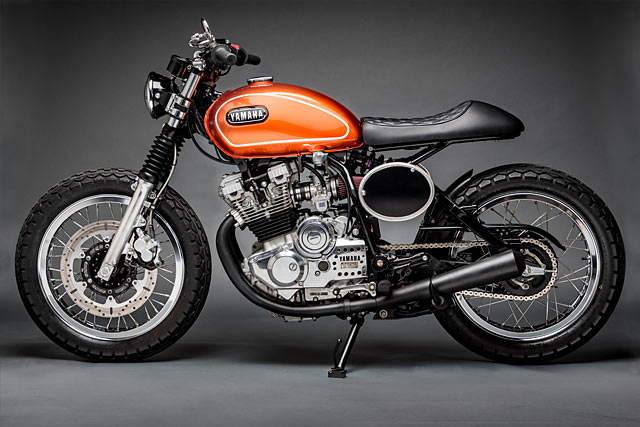 The suggestion to build a Yamaha XS400 came from a long time customer of Hageman’s and a man who is now a good friend, Mike Martens. “After finding pictures of the frame design, reading reviews of the bike, he convinced me this bike could be a great little machine. The specs were great, design very good, but very aesthetically challenged. It seems to be a running theme with most of my builds, take something mechanically attractive, then make it physically attractive,” explains Greg. But having conquered the XV range and done brilliant things with the Honda CX, machines from left field have never held him back. 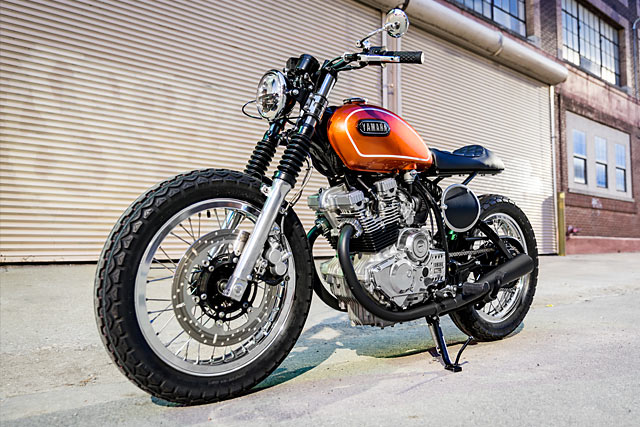 Mike also had a very good reason for wanting an XS built, his girlfriend Sally hadn’t been riding for years and with her keen to get back on a bike they all decided it should be on the seat of something done just for her! “Mike went on the hunt for a clean low mileage XS400 Seca, they didn’t sell many here in the states, but he was able to find a super clean donor on the West Coast. Mike had the bike shipped to him in Kansas City and let it sit until I was ready for the build. As soon as it was time he hauled the bike down to Florida, we spent a few hours going over things, then it was game on!” 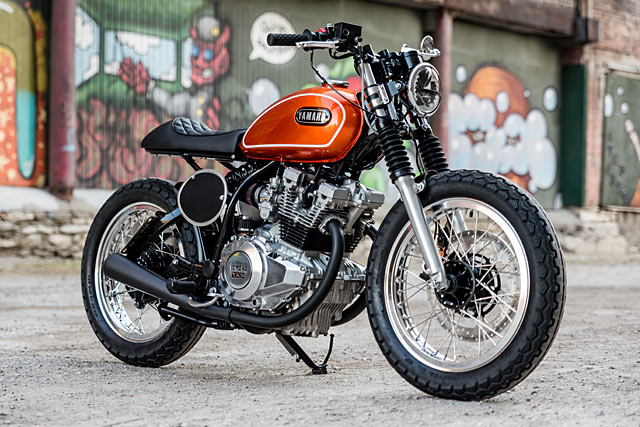 “Panel beaten to perfection with every line a winner, it more than pops in a new coat of Candy Tangerine paint.”

Setting the theme of the bike was the tank selection and the left field pick gave Greg plenty of inspiration. Taken from the tiny Yamaha JT1, it was the hot little bike to have back in the day. “After choosing the tank, it was easy to draw influence from late 60s early 70s models, especially the JT1, I wanted to build a grown up version.” enthuses Greg. Panel beaten to perfection with every line a winner, it more than pops in a new coat of Candy Tangerine paint. It’s the one truly extravagant part of the build with the classy black leather seat the perfect contrast. 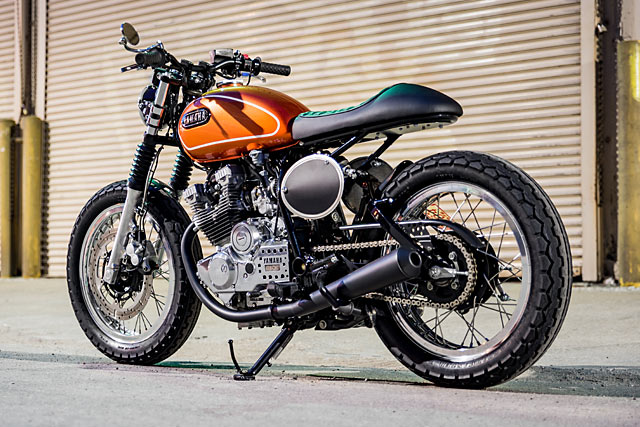 The major modification to the XS comes with the total re-design of the tracker’s rear end with an all new subframe and swingarm combination. Expertly fabricated the round bar tail with its smooth lines are a long way from the original boxy rear. The mono-shock design suspension is controlled by a custom Hagon shock, rather than simply picking something from another model and hoping for the best. The well setup ride for Sally’s exact specs continues at the front with XJ600 forks fitted up to the XS frame. The high quality of Hageman’s builds is once again evident with a super neat rear hugger and chain guard, like factory, only better! 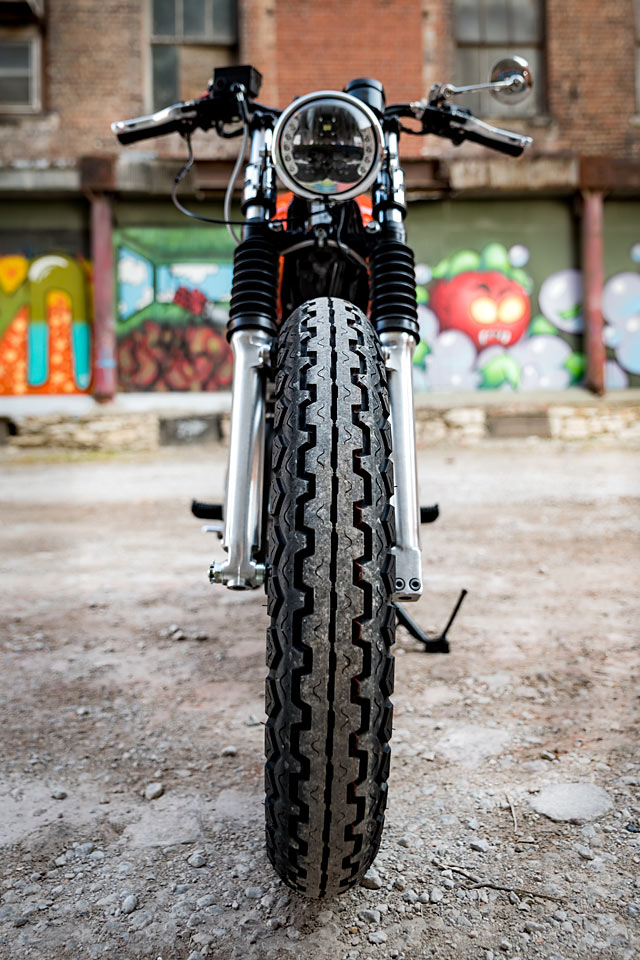 While plenty of development has been done on the XS’s cousins, the 392cc parallel twin remains a mystery to most. But that’s not a problem for master mechanic Hageman who can get his head around just about anything. “One of the toughest parts of the build, dealing with carburation, the original CVs were not good even back in the day. I chose to use a set of carbs I was very familiar with, some Mikuni VM34s. They are relatively easy to tune, and simple, once they are set, they run consistent. Getting the jetting set up wasn’t even that tough, but finding a starting point took a little experimentation.” 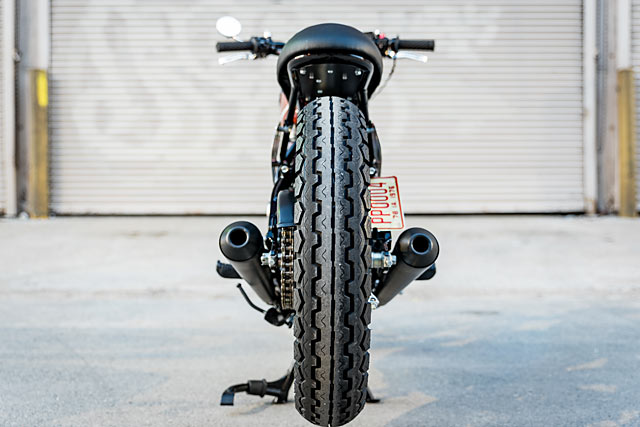 Those Mikuni’s sure help the aesthetics of the lump too and with a complete clean, repaint and polish it looks better than the day it left the factory. Sending the exhaust gases rearward are a set of ceramic coated headers that flow seamlessly into a pair of twin reverse cone mufflers in a matching finish. The 2 valve head means Sally has plenty of torque down low but the engine is also surprisingly smooth with the later model having been fitted with a gear driven counter-balancer. And Greg’s happy to report she’s got it up top too, “The bike screams at high rpms and just loves to rev. The bike is fast and happy, the 6 speed gearbox helps.” 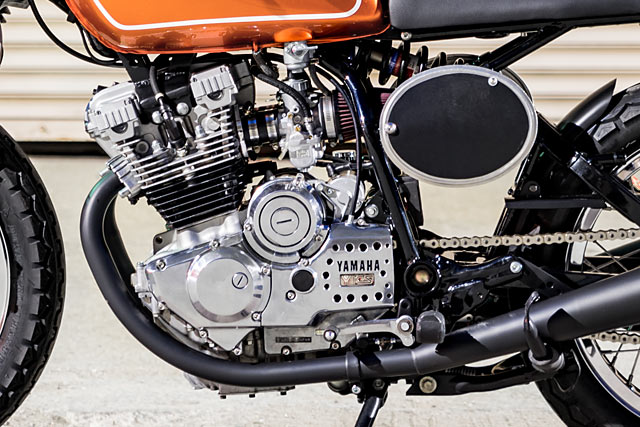 The electronics package is as clever as the rest of the build and all is neatly hidden away, doing its job without causing a fuss. Although what you do see is a very clever addition, with old switch gear often damaged, NOS expensive and rarely the nicest thing to look at, Greg picked up a set of modern Yamaha FZ-07 switchblocks and adapted them to work with the old XS. The rest of the package is run by a Motogadget m-Unit, with a Bikemaster headlight, rear taillight and turn signals from Revival.

Matching the look of the bike to the period that gave the inspiration, spoked wheels are a combination of Excel rims laced up to an early XS rear hub and XV700 unit at the front that was modified to fit. While ensuring there is plenty of brake at the lever a big drilled single disc and twin pot caliper do the clamping. Finishing things out the tyres continue the right vintage look and a pair of side boards add a final race like feel. Now with a Hageman Yamaha build of her own, you can only imagine the look on Sally’s face when Mike handed her the keys and you wouldn’t blame her for having a little Mustang in her step! You been running all over the town now. Oh! I guess I’ll have to put your flat feet on the ground. 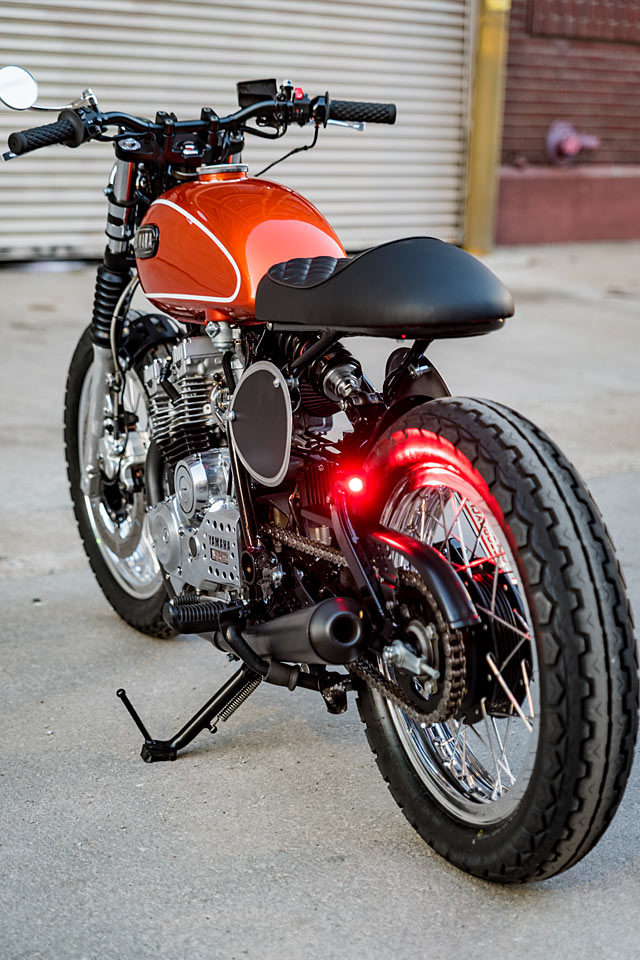