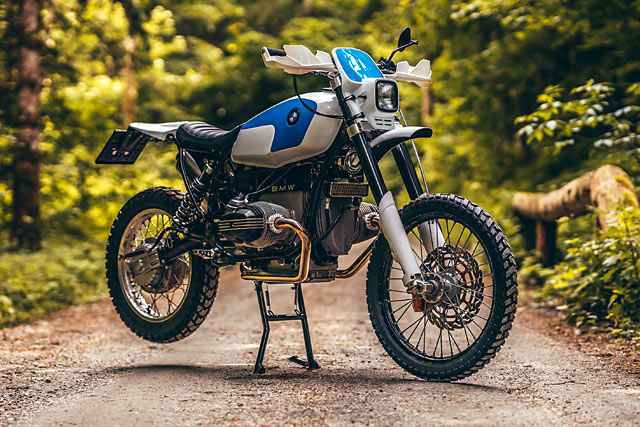 It’s been a Long Way Round, a Long Way Down and won the gruelling Paris-Dakar Rally; the BMW GS just might be the world’s most versatile go-anywhere moto machine. So it makes perfect sense that if you’re an Enduro riding instructor it’s the sort of machine that’s right up your alley, but wanting a custom classic example where do you turn? That question was answered with a simple call to David Widmann at Austria’s NCT Motorcycles. Tasked with taking a BMW R80GS and turning it into such a ride, the team pulled out all the stops, collaborated with the best in the business and have produced the ultimate weekend warrior for a man who likes to travel any road and off them too. 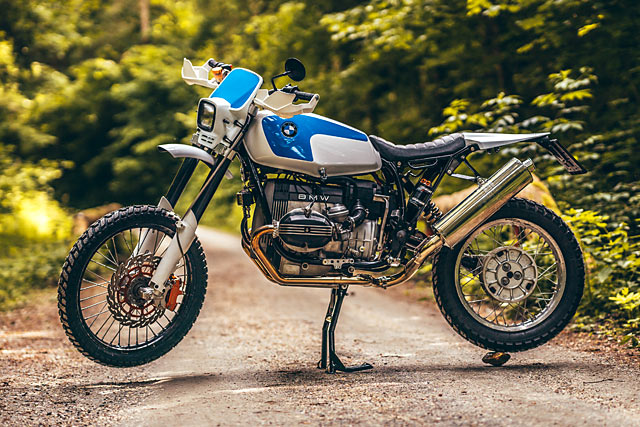 Regular readers of Pipeburn will be more than familiar with the litany of brilliant bikes coming out of NCT in just about every style you can imagine. But being tasked with coming up with a custom classic enduro machine that functions as well as its form was a new challenge they were all too willing to take on. Talking things over with the client, an experienced ride instructor, they agreed an ’80s GS was the perfect base and with his list of must haves written down, David and the team were ready to roll up their sleeves. 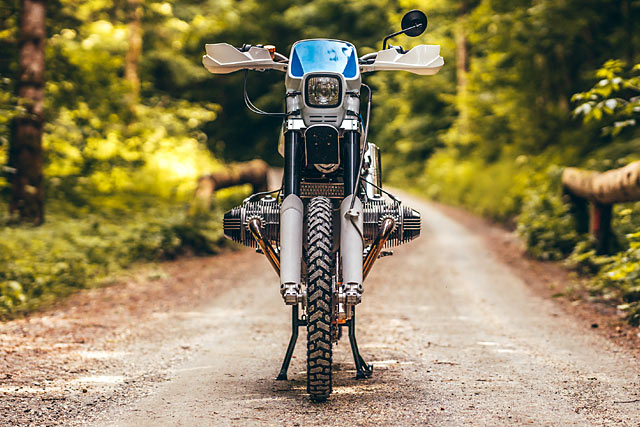 “We’ve started like with every other project by stripping the donor bike down. After that we’ve shorted the rare frame and powder coated it in black,” explains David. NCT believe in the full nut and bolt approach to a build and with a bike that’s going to be ridden in anger in all sorts of conditions that’s an extremely good idea. Instead of the big plastics from the original bike the subframe now sports a beautifully integrated Acerbis fender, complete with plate holder. While up front the Rizoma parts catalogue was raided with the right fender chosen and then shortened to match the rear. 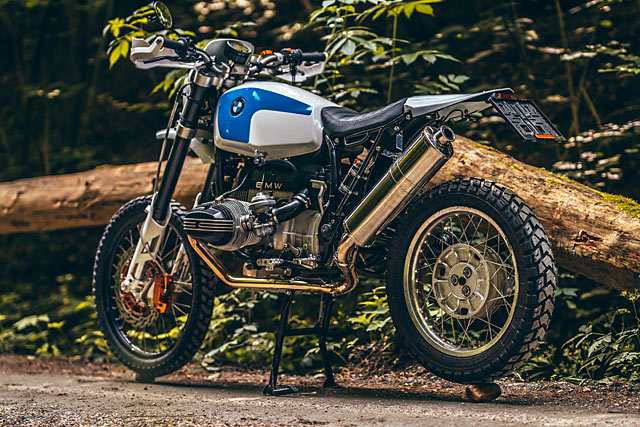 “Even the bark busters and fork covers were expertly colour matched to ensure they sported the particular Bavarian hue.”

Putting its classic race face on the BMW has been given an Acerbis Elba front headlight mask that definitely ticks that Dakar box. While it was decided that the stock tank would remain, the team set about ensuring it was arrow straight before the paint was laid down. After a lot of thought, they agreed the BMW racing colours from the period would be the ideal choice and the white with blue accents have been perfectly laid down. Even the bark busters and fork covers were expertly colour matched to ensure they sported the particular Bavarian hue. 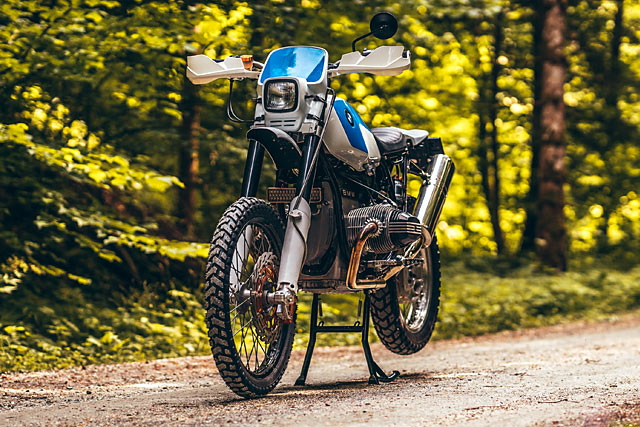 While the paint dried all the old wiring was stripped from the frame and a new loom created to make for a lightweight and minimalist combination. The heart of the system is an m-Unit from Motogadget with control handed over to a set of modern switch blocks. These are mounted on the new bars along with an improved master cylinder and quick action throttle. While tiny LED indicators keep things legal and a single Acewell speedo provides all the vitals needed for a hard day in the saddle. 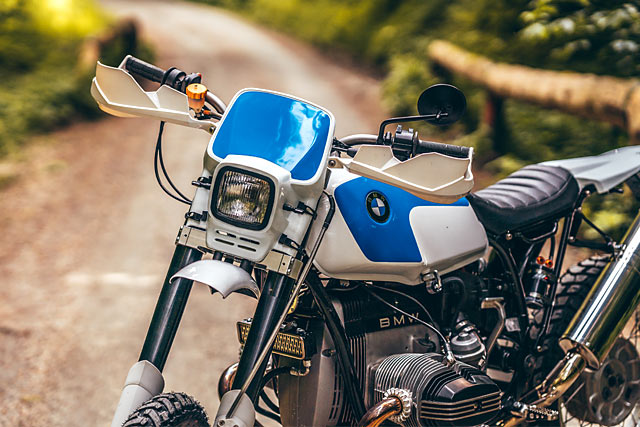 The suspension package on a true enduro machine is the most important area to get right and David wasn’t going to be cutting corners. The decades-old front forks have been tossed aside and in their place are new WP USD items; the sort of thing you’d find on a factory fresh KTM. To hold them in place a pair of billet triple clamps have been machined, lightweight and capable of taking plenty of abuse. At the rear the mono-shock is also replaced by a WP item, a fully adjustable unit that can be fine tuned for the weight and style of the rider. 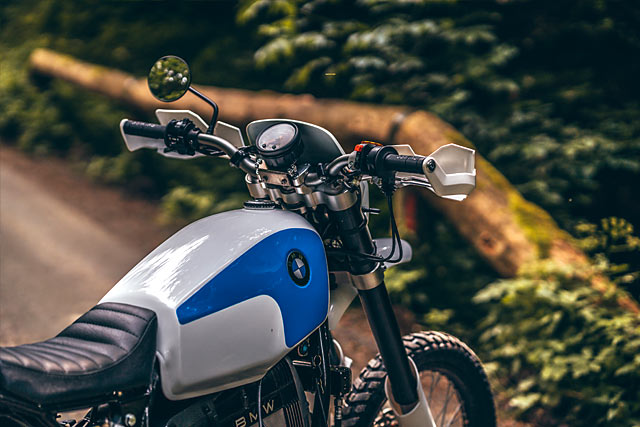 Going the extra mile the remote reservoir is rubber mounted to the frame ensuring it won’t be damaged in even the harshest of conditions. With the suspension now up to scratch, the front wheel has come in for a change too, up two inches to 21, it’s better suited to handling off-road duties. The stock rear rim remains but both ends get new stainless spokes before being wrapped in Heidenau K60 dual sport tyres. While bringing the braking into the 21st century is a KTM wave pattern rotor clamped by a four piston caliper that feeds from braided lines. 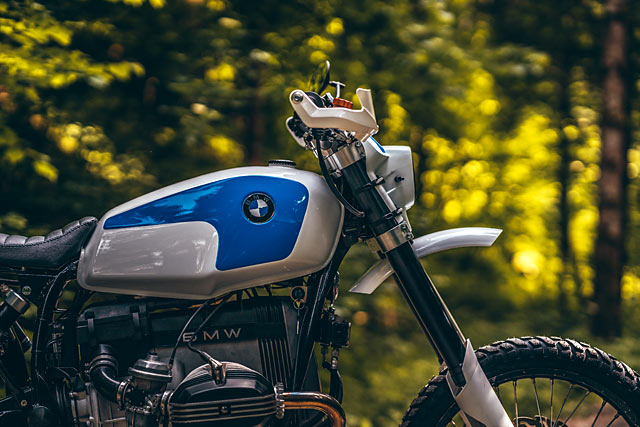 With around 50hp from the factory the 800cc version of BMW’s boxer twin isn’t the most powerful, but its linear torque and near on unbreakability make it perfect for an enduro machine. Having already lived a lifetime the engine and gearbox were yanked out and sent over to Siebenrock for a complete overhaul. The company specialises in the 2 valve motors from Bavaria and know all the tricks to turning out a flawless example. In addition to the rebuild they also fabricated a stunning full stainless steel exhaust and fitted up an SGS muffler, dyno proven to make power. 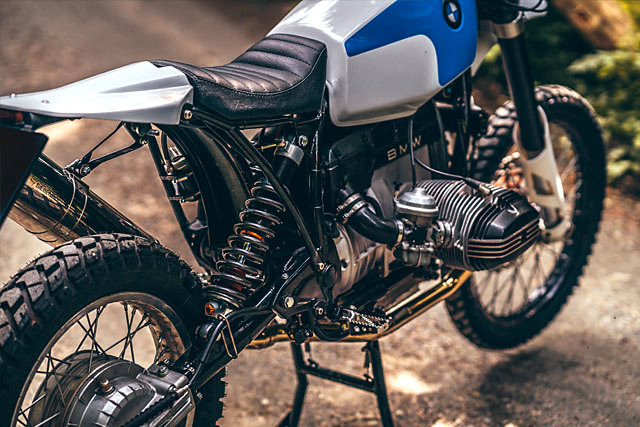 With the raised front fender and new forks now exposing the oil-cooler to more potential damage, David fabricated a small cover to halt even the largest of stones. The finishing touch comes with the custom leather seat, made to brilliantly fit the lines of the frame while still giving the rider plenty of padding. “This project is completely different from most of the other bikes we have built so far. Normally we are more into cafe racers, brat bikes and scramblers so it was fun to build an enduro bike with vintages lines and aspects,” enthuses David. Now with one incredible BMW off-road weekend warrior that will be seen by the masses its hard to imagine it’ll be long before the NCT team is doing it all again. 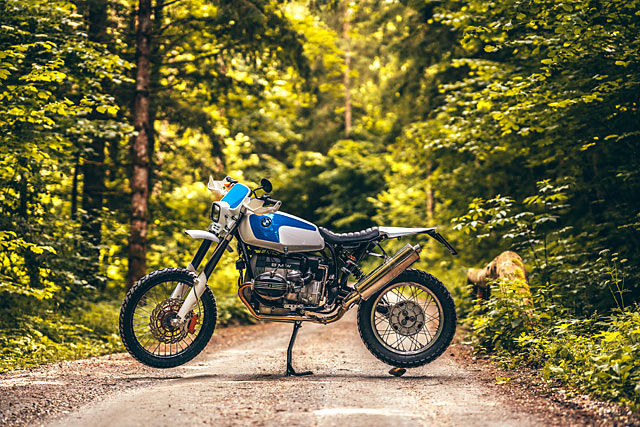